Claim: MH370 contrails have been identified

– The second turn (~80 deg right) is toward waypoint SAMAK

journey into the SIO

Very interesting but also worrying as this kind of analysis would lend itself extremely well for cherry picking and bias as the route is not independently arrived at (eg the Inmarsat ping data and course projection were plotted and known by the people looking for the contrails). And although I've zero experience with finding contrails in satellite imagery, I could point at many different locations on the photos and at least convince myself there's something there. Is this some established technique? What is the miss and hit ration when trajectories are not given out beforehand?

If they can be independently identified as contrails then they would almost definetly be from MH370.

There are a few flights that go through there, generally East Coast OZ to the Middle East; I wonder if they were identified as well? It would make a valid cross check.

I am sceptical about this identification. I would not call myself an expert, but I got some experience with identification contrails in satellite images in the past five years, doing it for Contrail Science and Metabunk.

One important thing to remember is that contrails do not coincide with the flight paths. They are carried away by wind, a typical speed of which at the contrail altitudes wind is about 100 mph. Due to the wind, the direction of contrail deviates from the plane course by a small angle (~5°) whereas the location of an aged contrail (~1h) may well be tens of miles away from the actual flight path.
The high altitude wind would probably have a pronounced effect on a U-turn contrail shape. By the time the turn is completed, the distal end of contrail will be at considerable distance from the actual flight path, so the turn will appear wider or narrower, depending on the wind direction, but it is less likely that it would match the shape suggested by (military) radar tracking. 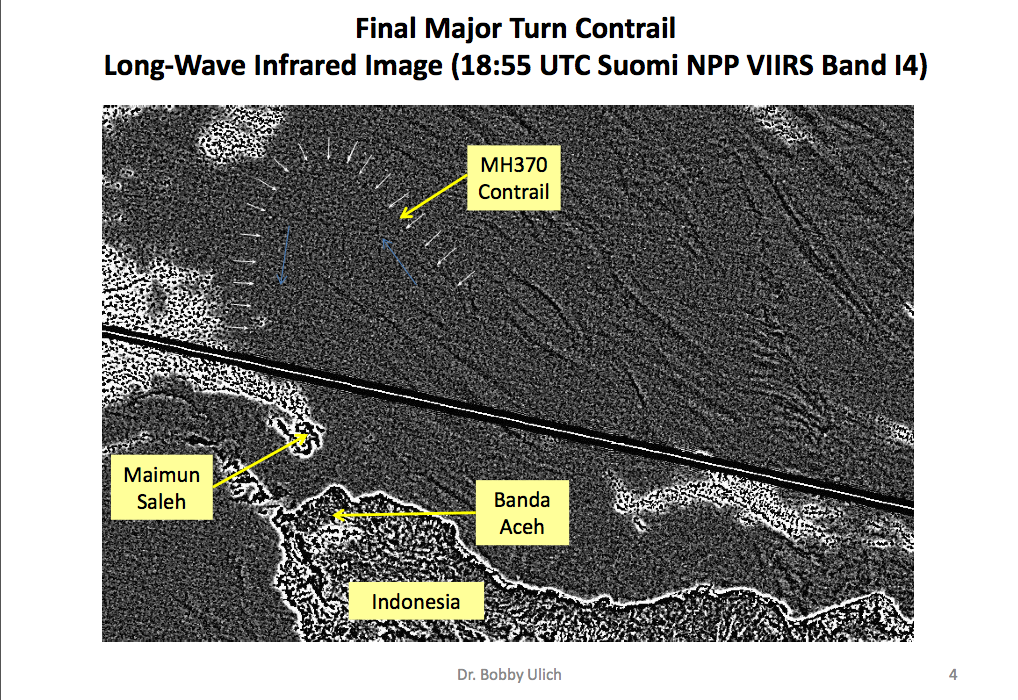 EDIT: The Earth server forecast for the location of the above turn at 18:00 UTC of 7 March 2014 at 250 hPa shows very little wind (>10 km/h), so, in this particular case, the contrail would match the flight path in this area reasonably well. However, the forecasted low relative humidity (~45%) suggested unfavourable conditions for the formation of long contrails:
http://earth.nullschool.net/#2014/0...ative_humidity/orthographic=-267.36,5.06,3000

The third contrail was first identified by Prostyakov and then measured by Ulich using five visible satellite images taken at 00:00-01:00 UTC (just after sunrise) in the SIO

If it were a contrail, then this finding would further support the main theory about MH370 being located in SIO. However, the presented evidence is not consistent with the suggestion of the dark line being contrail shadow on the cloud deck below, but in fact suggests the opposite. The line position relative the cloud deck did not change for one our, whereas the shadow position is expected to change over time because (i) the contrail is likely to move relative the low cloud deck and (ii ) the sky position of the Sun changes. So this line is almost certainly a natural gap in the cloud layer, like a wider near horizontal line crossing its lower end. 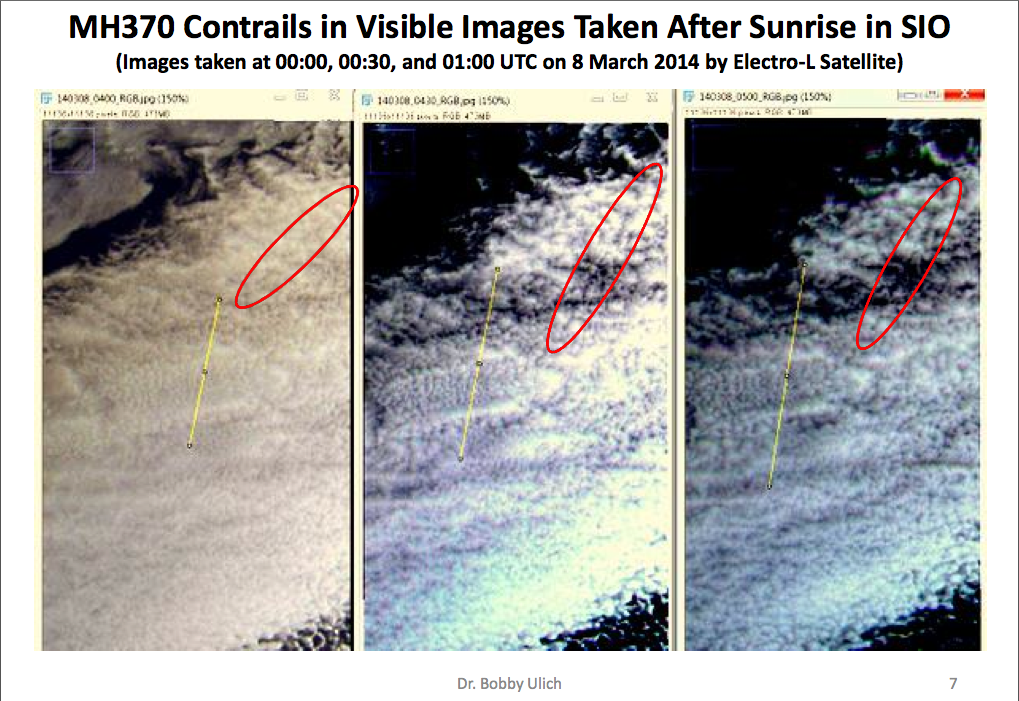 There is a possibility of this dark line being a distrail cut in the cloud deck by an aircraft. However, it is both too loong and too wide for a distrail. Distrails can be seen in the MODIS satellite images at their highest resolution of 250 m per pixel. The apparent resolution of the above images is much less than that. The Electro-L satellite is positioned at a geostationary orbit, which is much higher than the MODIS satellites orbits.
EDIT: In addition, the forecasted low relative humidity at this location at the time would not support the formation of so long contrail (~2° of latitude, or ~200 km, at the least):
http://earth.nullschool.net/#2014/0...tive_humidity/orthographic=-268.90,-14.98,898
Last edited: Apr 18, 2015 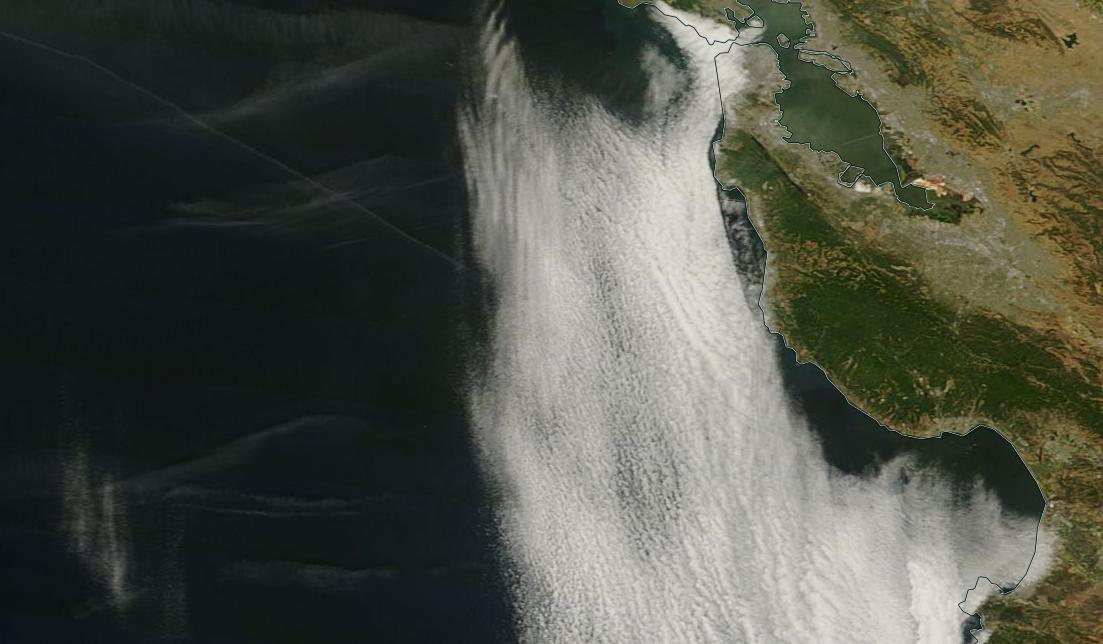 It has been identified in this thread:

The satellite photographs of the day show a layer of marine clouds along the California Coast, but no clouds or persistent contrails over the land. In the Terra image taken at 18:55 UTC, there is a long young contrail casting shadow on the cloud layer in the Monterey Bay area. FR24 playback has identified this contrail being from SIA12 flight NRT -> LAX, the altitude of which was 39,000 ft.
Click to expand...

One can go to the NASA Worldview by the above link and zoom in and out to see for themselves at what scale/level of resolution the contrail becomes (in)visible.
Last edited: Apr 20, 2015

TWCobra said:
If they can be independently identified as contrails then they would almost definetly be from MH370.

There are a few flights that go through there, generally East Coast OZ to the Middle East; I wonder if they were identified as well? It would make a valid cross check.
Click to expand...

and no airline or even Antarctic air supply routes traverse the SIO from north to south. 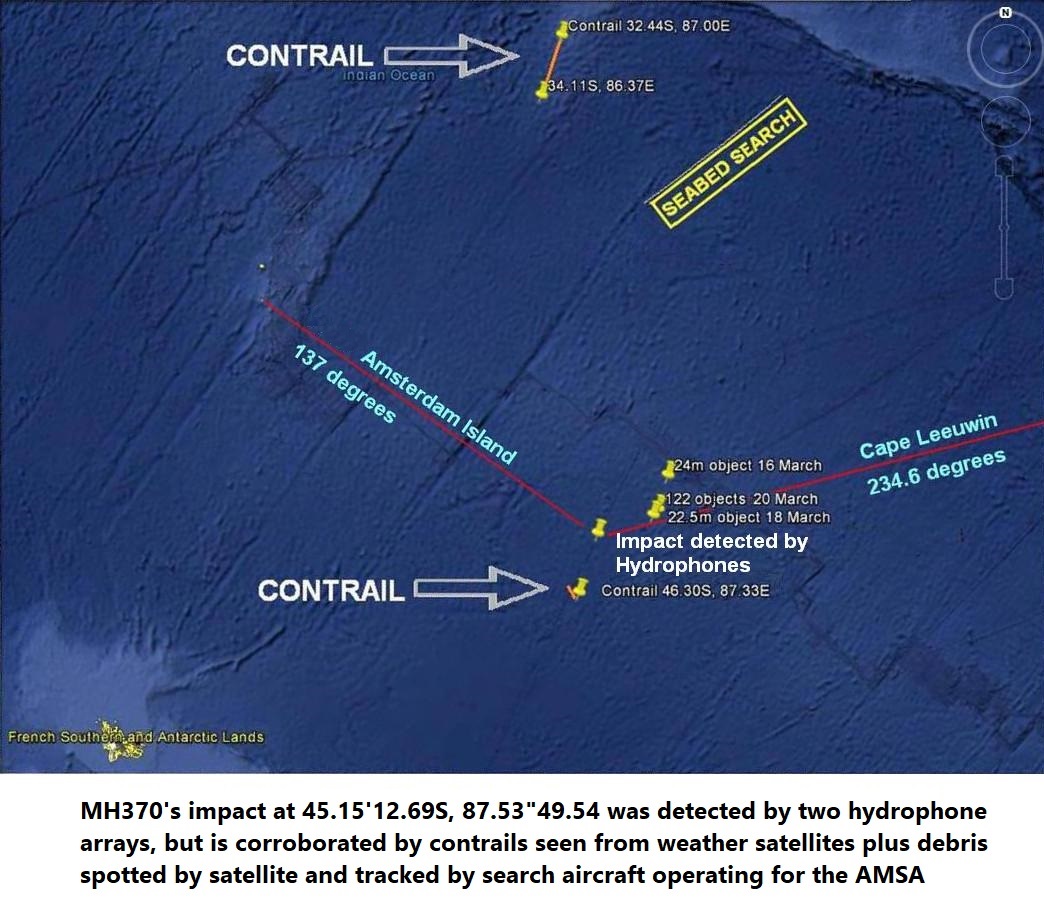