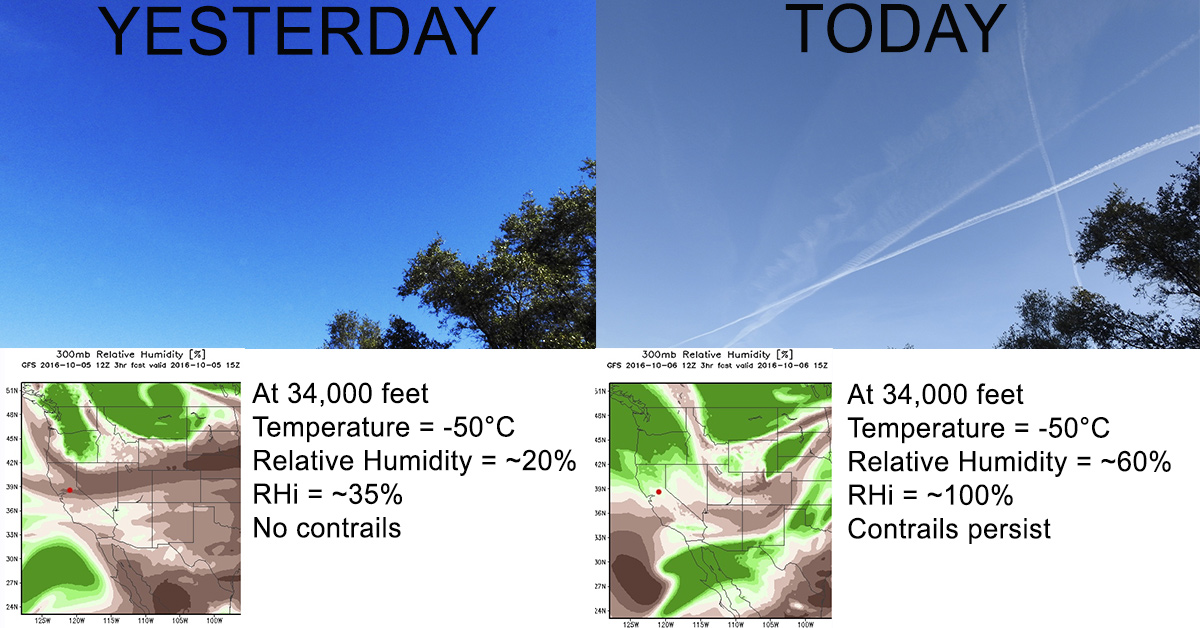 Today (Thursday Oct 6th, 2016) marked the first significant contrail morning for several months here in El Dorado County, Northern California. The above photo on the right of criss-crossing contrails was taken at 7:30AM, and planes continued to leave trails for the next few hours. I took photos of the jets, and they were just regular air traffic, mostly Alaska or other regional jets flying north or south, often to or from Los Angeles. They were all in the range 36,000 to 39,000 feet. 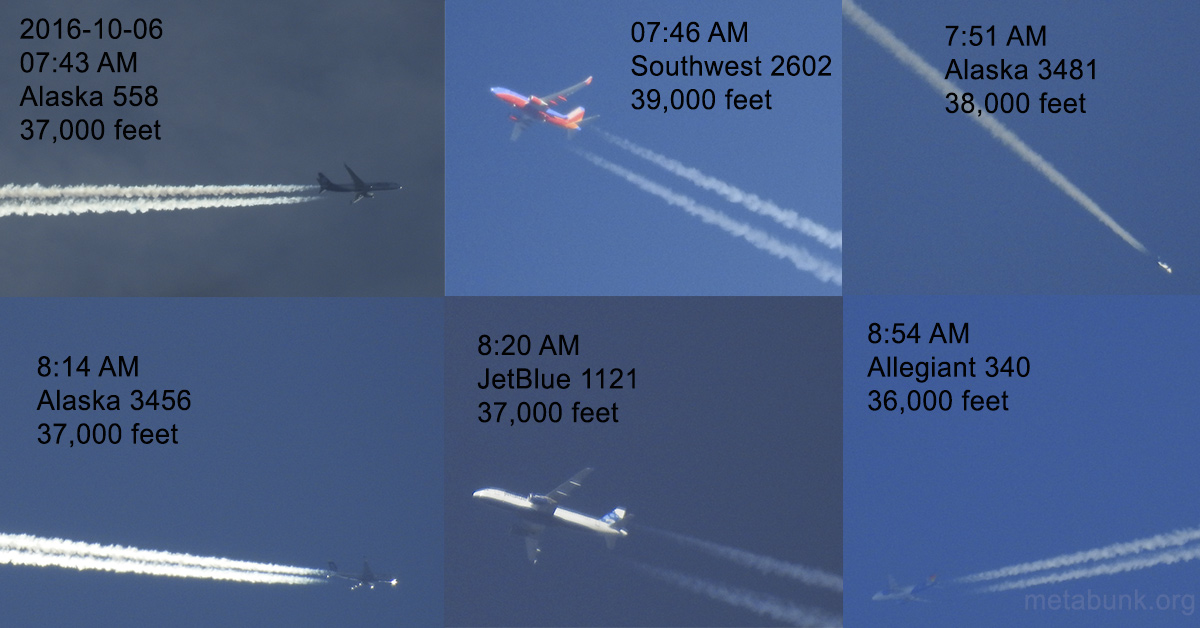 But it's Thursday, and the air traffic on Wednesday was pretty much identical. So why were there trails this morning, but not yesterday morning?

The answer is quite straightforward. It's the upper air weather!

Upper air weather is different to the weather on the ground. At 35,000 feet up it's very cold (usually below -40°F/-40°C), the air is thinner, and the winds are stronger (often 50 to 100mph). Contrails need two things to form and persist. They need cold air, and they need that air to be humid. So what was the difference in upper air weather?

That takes you directly to Maps/GFS/CONUS/Upper Air.
(GFS = Global Forecast System, the most commonly use weather forecast. CONUS = Continental United States), you can also get there via the home page on the menu:

To get older maps from the past week you need to figure out the time. There are actually TWO things you have to select. Let's say we want 7AM this morning. First we need to convert to "Zulu" time, which is just GMT. We can do this with google, just type in "7AM PDT in Zulu", and it will tell you the Zulu time:

2PM, on the same day (sometimes it's already tomorrow in GMT, so you need to account for that). So that's 1400 hours, or 14Z. However the menu only lets us select in increments of six hours. 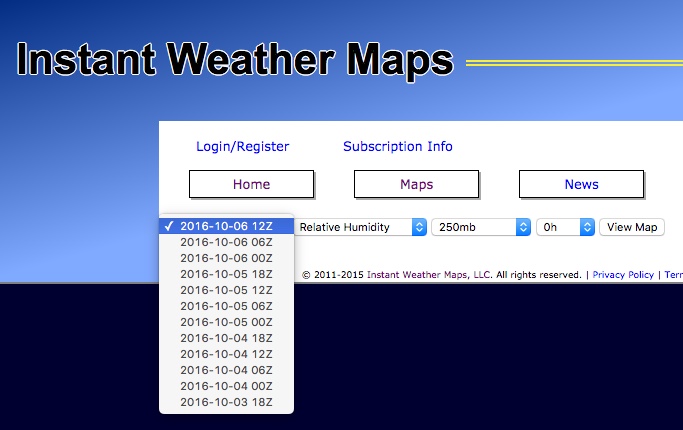 The reason for this is that the various physicals reading that the forecast is based on are only updated every six hours. After that it's "just" a forecast. We can adjust the time forecasted for, but we really only have the options of +0 hours, or +3 hours. So we pick the closest time and then (optionally) add three hours to it. In this case +3 will give us the closest, being equivalent to 8AM 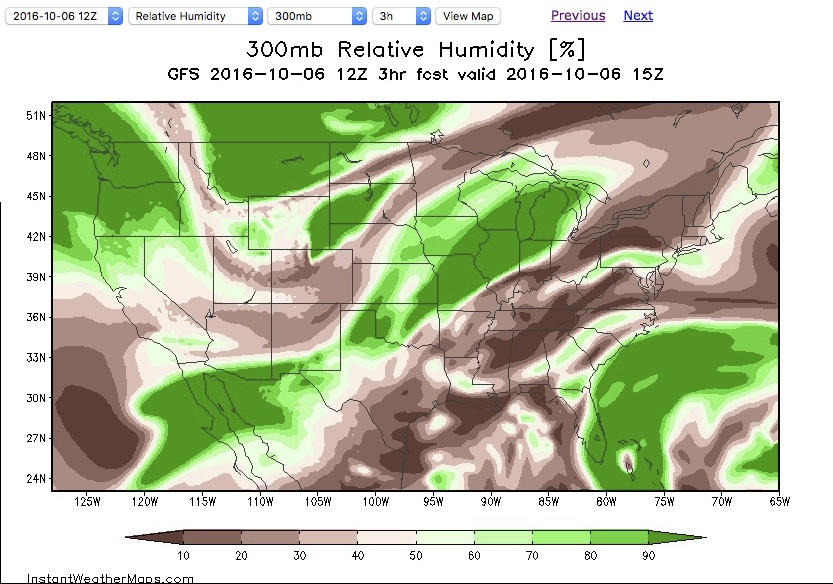 And here's the same map for the same time yesterday 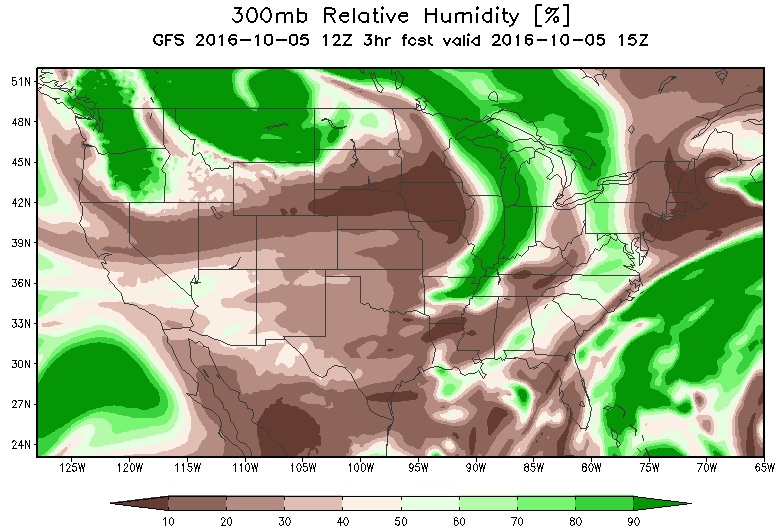 So what's the difference? We need to look at the precise location. I'm about midway between San Francisco (which you can see as the Bay), and Tahoe (which is at the 45° angle on the California/Nevada Border). I've marked it here on both maps with a red dot. yesterday morning is on the left, then this morning on the right 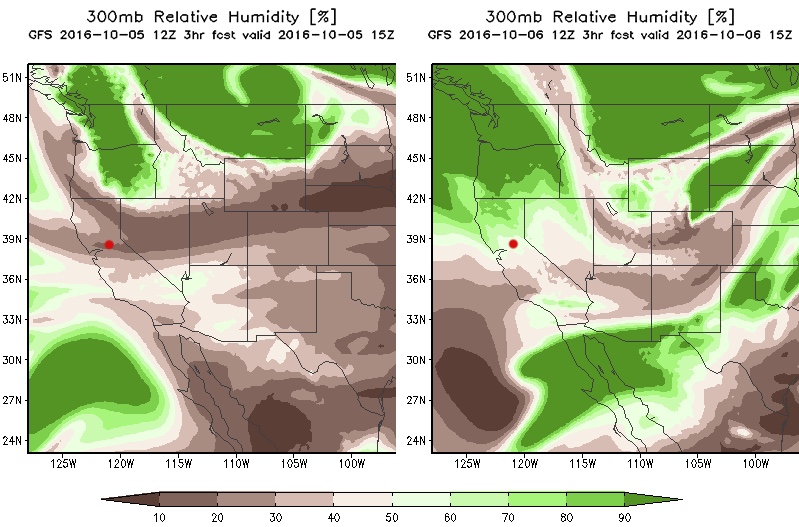 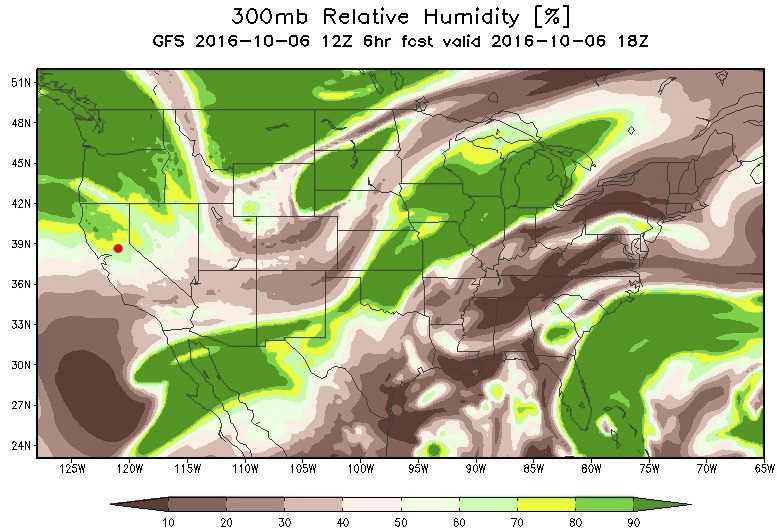 Here I've recolored the 70% band to make it more clear.

Now 70% RH is often given as a rule of thumb for persistent contrails. But the actual value depends on the temperature (and to a very small degree the pressure/altitude). The colder it is, the less the RH needs to be. In fact at -40C you only need 67.5% RH, and at -50C you will get persistent contrails at just over 60% RH. So we also need to know how cold it is/was.

We have today's upper air temperature: 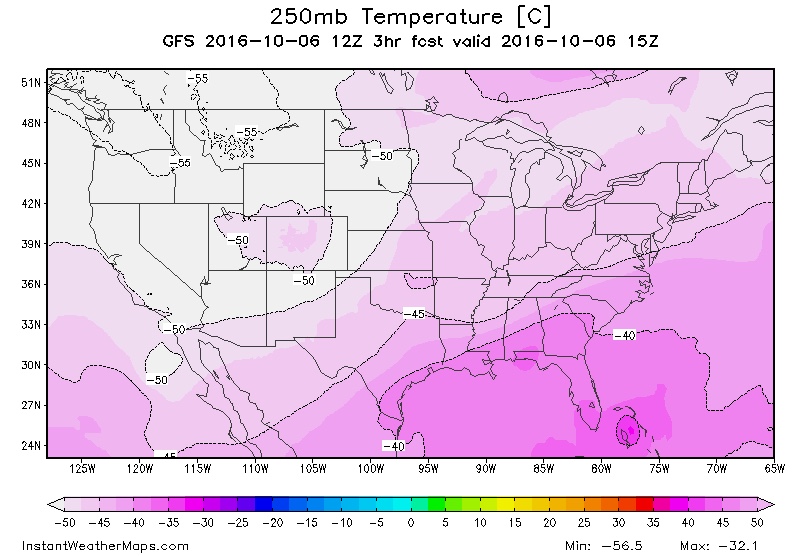 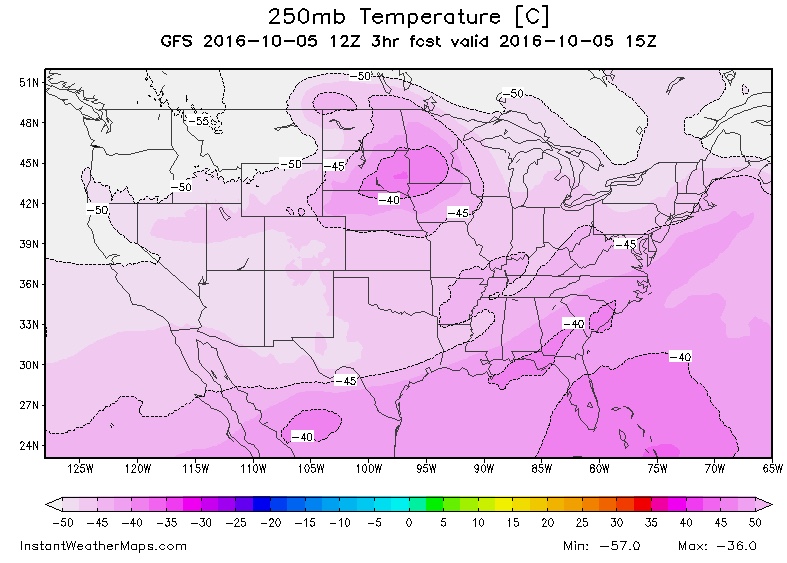 Quite unambiguously -50C there, which is -58F. Today is a bit colder than yesterday, but not a lot. The significant change has been in humidity. The air was cold enough both days, but yesterday was too dry.

So the very simple answer as to why there are contrails today but not yesterday is that the upper air weather directly overhead changed a bit.

The change in the weather was noticed by chemtrail enthusiast John Knox, who posted videos of the sky over Los Angeles Coast on two consecutive days, Oct 7 and Oct 8 (2016). 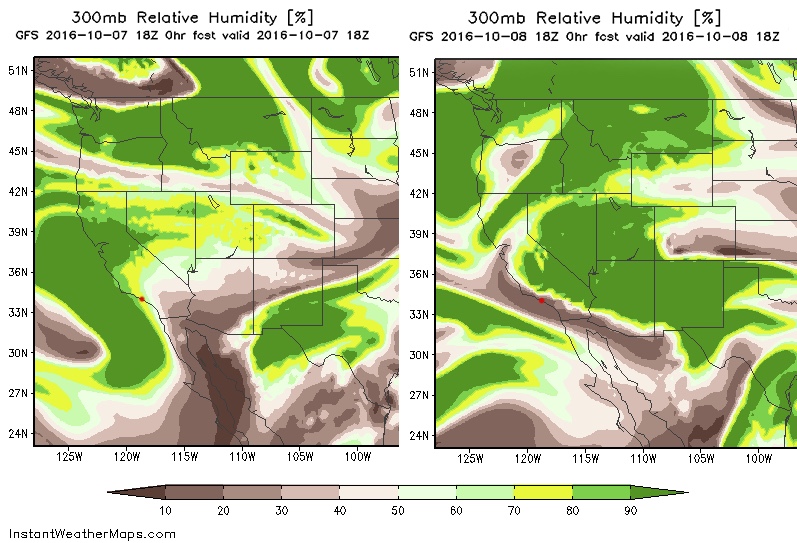 On the 7th Los Angeles is right in the 70% zone. Ideal conditions for contrails to form in a clear blue sky. On the 8th it's in the 10% to 20% zone. Blue sky conditions.

To visualize how much it can changed from one day to the next, here's 72 hours (three days) of 30,000 foot RH. Green areas are the contrail areas. Brown areas are no contrails.

An entire series of comparisons like this was made by @Trailblazer, who matched the RH maps with his location in the UK.
https://www.metabunk.org/contrails-versus-humidity-a-timelapse-project.t6180/

For a variety of ways of getting the RH readings, see:
https://www.metabunk.org/relative-h...udes-resources-and-contrail-prediction.t8084/
Last edited: Oct 22, 2016
Click to expand...

Administrator · From Sacramento
See:
https://www.metabunk.org/threads/about-metabunk.1966/
Staff member
Back on topic, looks like another great contrail day over EDC today. 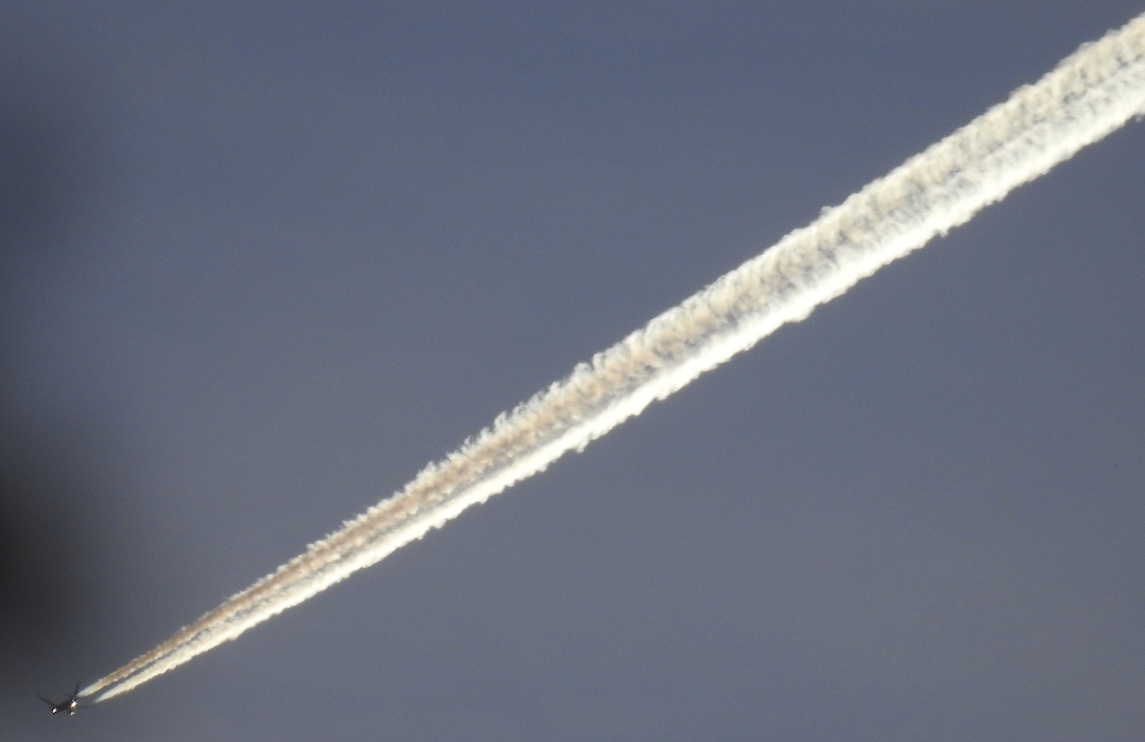 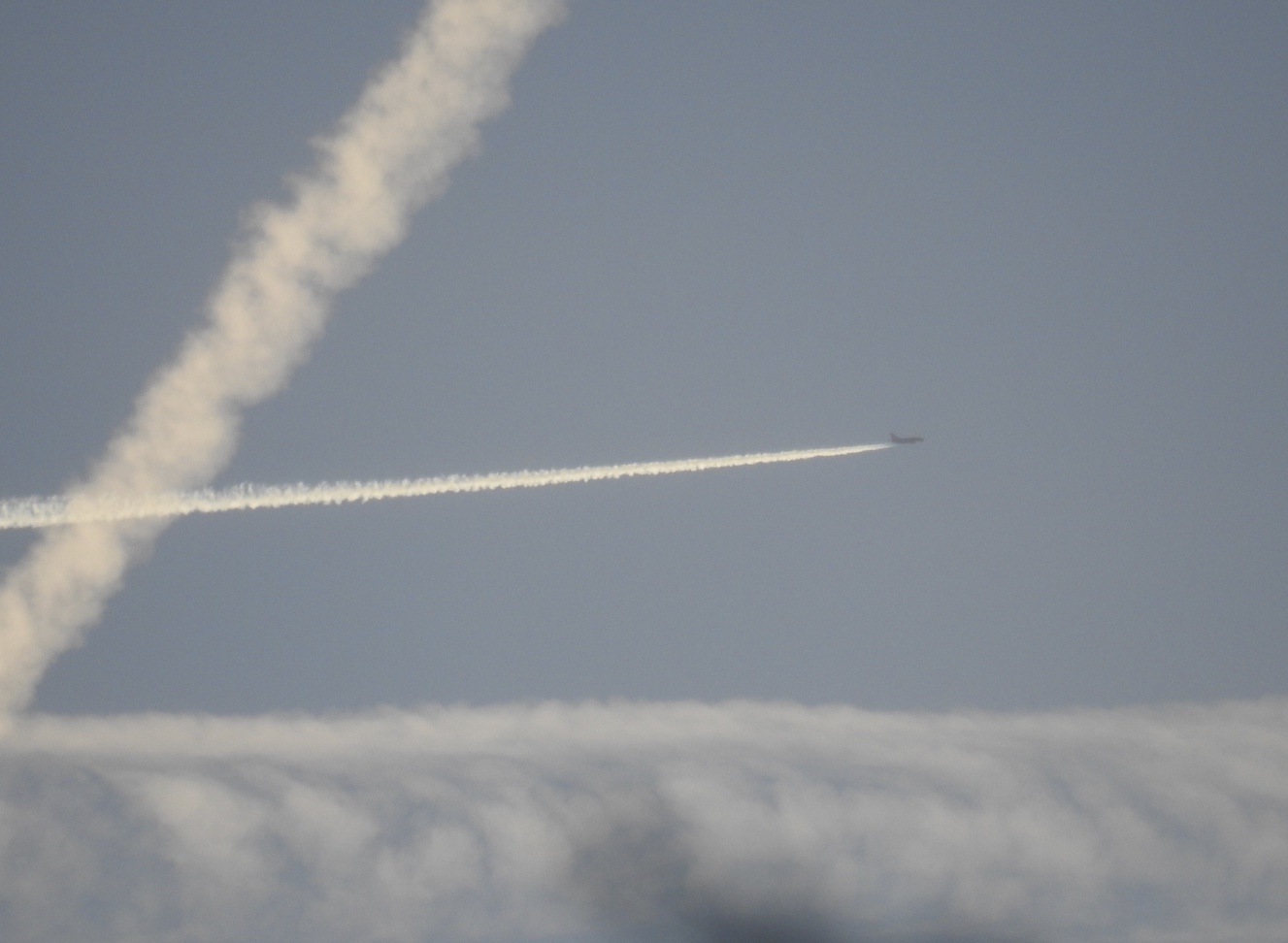 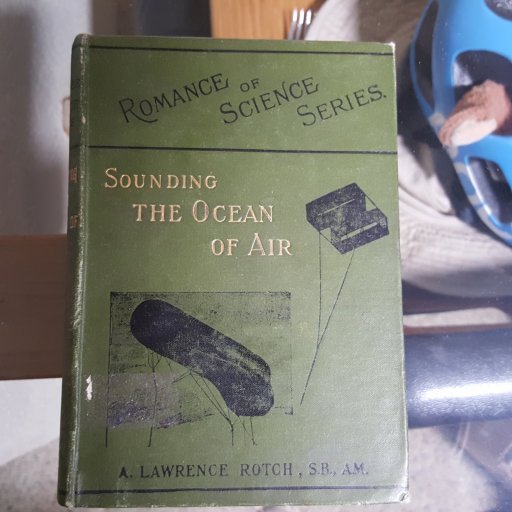 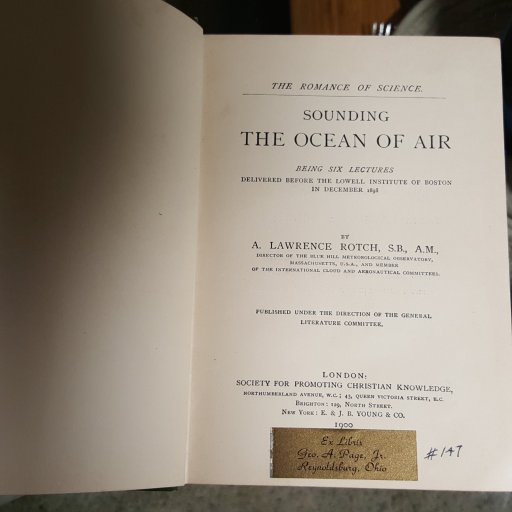 Mick West said:
Back on topic, looks like another great contrail day over EDC today.

but was the sky filled with cirrus clouds, which allows that?

steve holmes said:
but was the sky filled with cirrus clouds, which allows that?
Click to expand...

allows the trail to be seen all across the whole sky. As you pointed out when showing how trails can have breaks, there are breaks because the moisture isn't high enough to enable trails to last in some spots. So, if the trail was all the way across the sky, there were no spots where the moisture was lesser, creating gaps.

steve holmes said:
allows the trail to be seen all across the whole sky. As you pointed out when showing how trails can have breaks, there are breaks because the moisture isn't high enough to enable trails to last in some spots. So, if the trail was all the way across the sky, there were no spots where the moisture was lesser, creating gaps.
Click to expand...

I'm still not entirely sure what your point is. But remember there are lots of altitudes. So something at 32,000 feet might not tell you anything about what is at 38,000 feet, or 45,000 feet.

Mick West said:
I'm still not entirely sure what your point is. But remember there are lots of altitudes. So something at 32,000 feet might not tell you anything about what is at 38,000 feet, or 45,000 feet.
Click to expand...

i think maybe he's thinking that if a contrail is persistent without gaps that means that the sky must be covered in cirrus, because that rhi would make cirrus clouds.

But @steve holmes clouds dont work that way.
1. cirrus clouds when present have gaps between them. ALL clouds most often have gaps between them. The sky isn't uniform from one location to the next.
and
2. a contrail, as i'm sure you've seen, can form when no clouds are in the sky. the byproduct of the exhaust of a plane includes water, it's this Extra water being ADDED to the borderline atmosphere that pushes the rhi over the limit to form a cloud. add: a contrail IS a cirrus cloud.
I've updated the OP with a similar analysis of two days of observations posted by John Knox on Facebook.
Found a handy link to the current conditions on instantweathermaps that saves you from going through those menus

Mick West said:
Found a handy link to the current conditions on instantweathermaps that saves you from going through those menus

Or for those of us not in the colonies, change the conusupper to euroupper

http://www.instantweathermaps.com/GFS-php/showmap-euroupper.php?var=RH&lev=300mb
Mick, there are several scientific and logic errors in what you state above.

[Mick: Other points removed until these two have been addressed]
Last edited by a moderator: Oct 12, 2016

Chemtrail-Buster said:
Mick, there are several scientific and logic errors in what you state above.

It shows that contrails can form at 30,000 feet. Above that is unknown, but possible.

To convert RHw to RHi for a temperature t, a sufficient approximation in the temperature range -70C to -30C is:

Please confirm you agree with these points before we move on to other points.

Chemtrail-Buster said:
Only a fraktion of the worlds day-by-day air traffic flyes through ice-supersaturated airmasses
Click to expand...

Subvisual cirrus is very common (or used to be.). The presence of cirrus implies that the air reached saturation wrt. water. Subvisual cirrus generally occurs at or just below the tropopause. Aircraft, these days, cruise at or near the tropopause. https://books.google.co.uk/books?id...6AEIJzAA#v=onepage&q=subvisual cirrus&f=false
@Chemtrail-Buster I removed the other claims you made until the first two have been addressed. Since they are related, we need to agree on a resolution for those before the others. Basically we need to agree on the relationship between RHw and RHi, and that ice supersaturation can occur at around 60% RHw (or if you think it's another number, then what is that number, or formula)
Last edited: Oct 13, 2016
A bit random but it's actually really impressive how many tools for weather and aviation are available to the average enthusiast! Lots of really cool info.
As a meteorologist, I loved going through this discussion. Yes, definitely humidity in the upper layers,. Generally associated with storms bringing it up, at least in my area, but not always.It depends on the plane as well, with some older jets putting out a huge plume. I'd also say that I've seen a decrease in "normal" cirrus clouds since the reduction in flights, probably due to lesser condensation nuclei. But I've never known how 'dirty' the upper layers are , by that including plane-made ice crystals, until this crisis. The last two moonrises were amazing, you can really see the difference. There was also a video, which I can't find anymore on YouTube, of contrails forming even at take-off, in extreme cold
Hey Stefan -

As Mick and you and so many others have pointed out, the atmosphere is an incredibly dynamic and visually amazing stage. I have a webcam that compiles a 24 hour video each night of the view of downtown PHX and the Sierra Estrella mountains behind. If there's any moisture in the sky, or the humidity at the various layers is just right, you can actually see some of the horizontal layer dynamics. It's common for me to see a lower layer of clouds moving one direction, and a middle layer moving a completely different direction, and maybe an upper layer doing something different as well. And the virgas! Of course, it's not so often that we have enough humidity to do anything visible...

Oh, I also have another webcam doing the same time-lapse thing, but pointed at the north celestial pole. The camera's not nearly as good, as it's barely sensitive enough to detect Polaris and Kochab; Polaris is more or less at the center of the FOV; Kochab makes a clean arc around the north pole. One of these days the camera will be significantly upgraded.

Stefan Leahu said:
There was also a video, which I can't find anymore on YouTube, of contrails forming even at take-off, in extreme cold
Click to expand...

Source: https://www.youtube.com/watch?v=9iIy3towV1w
You must log in or register to reply here.