Hi everybody. A friend sent me a link to a story involving black hawks conducting urban training exercises and he asked me my thoughts.

Has this topic been covered? I haven't found it anywhere.

Oh, I thought this was current and would be going on for months at first....then I realized it went on for a month last year. I don't see anything nefarious here personally, if they didn't practice here it would be another city. Fact is they can't built a sprawling urban environment with skyscrapers just for training(though the USMC has an island which gets fairly close).

This is a relatively nearby military base: http://en.wikipedia.org/wiki/Fort_McCoy,_Wisconsin

jvnk08 said:
Oh, I thought this was current and would be going on for months at first....then I realized it went on for a month last year. I don't see anything nefarious here personally, if they didn't practice here it would be another city. Fact is they can't built a sprawling urban environment with skyscrapers just for training(though the USMC has an island which gets fairly close).

This is a relatively nearby military base: http://en.wikipedia.org/wiki/Fort_McCoy,_Wisconsin
Click to expand...

I don't recall ever seeing something like this in my lifetime. In my 25 years as an air traffic controller i never heard of these kinds of operations being approved over a civilian population. I have never personally worked such an operation while on the job. Why, with all the MOAs (military operating areas) in this country, why take these kinds of operations over a civilian population?

Having lived near Camp David for over 20 years i became accustomed to hearing very low choppers whizzing by my house. After 9/11 i became accustomed to F16s swooping down so low the afterburners would shake the windows and i couldn't hear the TV. What really makes me question these latest operations was the use of blank bullets. Why use blank bullets? The sound of gunfire just gets the attention of the civilian population. Why get the attention of civilians in this fashion? It can look like they're gauging/conditioning public reaction to a military engagement in their city.

PCWilliams said:
It can look like they're gauging/conditioning public reaction to a military engagement in their city.
Click to expand...

I was thinking perhaps that is part of it as well, maybe seeing what kind of attention they get from the public?

Another theory I had is that maybe they are practicing flying in a denser urban environment with skyscrapers? But on further consideration that seems incredibly risky.

Any further information on this? Seeing as it happened last year, maybe there are some details out there.

I've done a little bit of research into this whole thing and this is what i've come up with so far. Bear with me, this might be a bit lengthy, but i like what i've found.

Some residents said they were terrified when helicopters swooped into town from the Army Special Operations Command, Ft. Bragg, North Carolina, last Monday night.
[...]
At least eight helicopters are reported to have participated in an assault exercise using live ammunition and explosives very close to innocent bystanders who were not warned of the planned action.
[...]
The Army Special Operations Command at Ft. Bragg, North Carolina, has acknowledged that the event was the kick-off of a series of similar training operations going on in Kingsville, Corpus Christi and Fort Sam Houston, but would not confirm that the group was the Knight Stalkers. Additional training events have been confirmed in the area.
Click to expand...

Friday evening the Williams family sat down in their Oxford living room and popped a movie into the VCR. Then the power went off — a total blackout in all the neighborhoods surrounding the Anniston Municipal Airport in Oxford — and what sounded like a war began outside.
[...]
Residents near the airport heard what sounded like machine gun fire, saw the fiery-red flash of explosions, and saw silhouettes of what looked like paratroopers dropping out of the darkened skies.
[...]
The “invasion” was part of a special training operation conducted in Anniston, at Fort McClellan and at the airport in Oxford from Tuesday until the wee hours of Saturday morning.
[...]
She said the Army does exercises like this “to give the rangers, Air Force special operations and the 160th opportunities to experience training in new and different environments. It adds to the realism of the exercise as real-world missions are in environments unfamiliar to our soldiers.”
Click to expand...

A planned Marine Corps training exercise in Richmond has some Virginians worried about secretive encroachments on civil liberties, accident hazards, and misguided use of the American military. The urban maneuvers, these worried citizens say, may mask preparations for a Year 2000 computer meltdown so great that governments are afraid to discuss it, or plans to confiscate firearms, or the groundwork for a presidential power grab.
[...]
The Marines and governments that have worked with the service on other exercises say the Marines are just getting ready to deal with crises that take them into increasingly dangerous urban areas overseas. . . .
[...]
The bottom line, the Marines' White said, "is we're doing this training to save lives, the lives of our Marines. "The allegation that we're doing anything other than that couldn't be farther from the truth."
Click to expand...

I was wrong. There IS a history of these kinds of military operations occurring in, around and above civilian towns and cities.

And of course, just like today, there was the same old, tired, over-hyped, alarmist rhetoric coming from the usual crowd:

​
THE TRUTH ABOUT BLACK HELICOPTERS
InfoWars.com - May 1999:

We are being conditioned, like Pavlov's dog, readied for what is coming, Martial Law. Whether a result of Y2K, domestic terrorism, financial crisis or some other contrived emergency, we shall think nothing of it when troops in black helicopters, wearing Nazi style uniforms, rappel into our streets and begin moving door to door. The signs are all there for us to read: Oklahoma City- like Hitler burning the Reichstag, the massacre at Waco, the drug war that has been used to usurp more and more of our civil liberties, mock gun conviscations, troops training in our streets and many others. The signs are there. Are we too concerned with our petty little lives, our stocks, our jobs, to care. Shall we just go about our daily lives, blind to what is happening around us?
Click to expand... 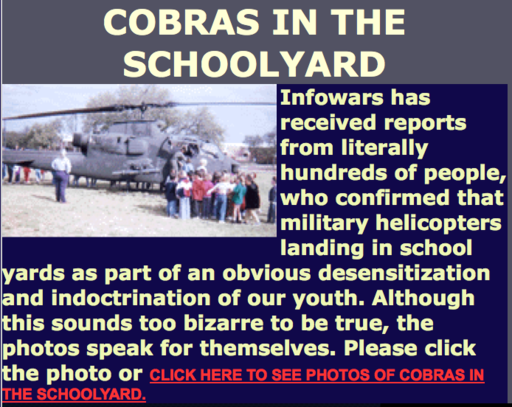 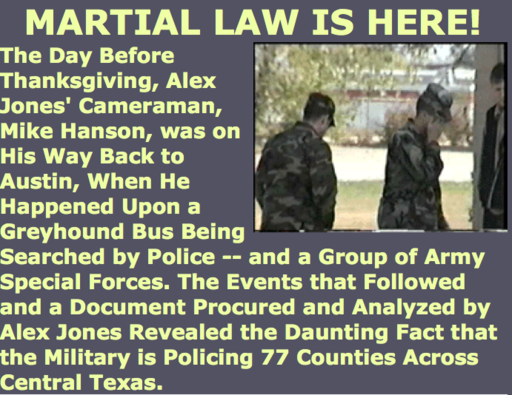 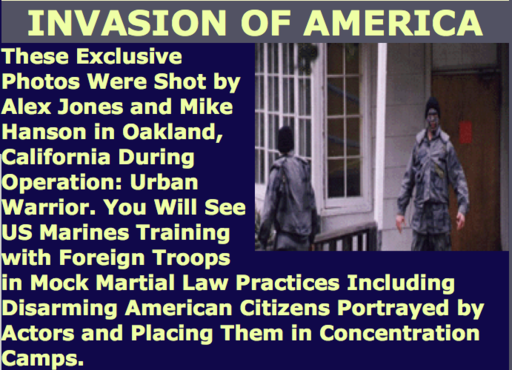 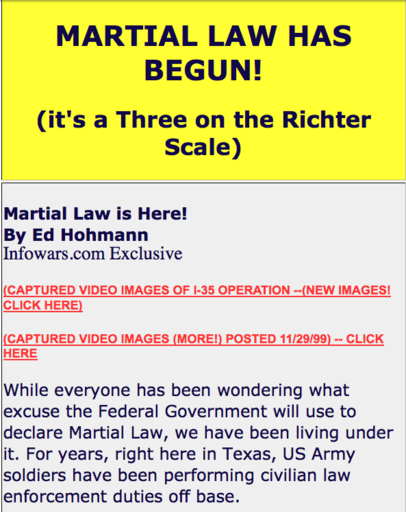 jvnk08 said:
Another theory I had is that maybe they are practicing flying in a denser urban environment with skyscrapers? But on further consideration that seems incredibly risky.
Click to expand...

In my research i found out that the military has pulled off far more risky maneuvers back in 1999. In a training maneuver over Texas they actually had a copter crash into a telephone poll. In another maneuver the military actually used LIVE ammo. And in an Alabama maneuver the town actually allowed the military to cut electrical power to the town for 2 hours!!!! Can you imagine sitting at home 8 o'clock at night, feet up, watching television, or maybe you're in the shower, suddenly the power goes out and you start hearing helicopters and the sound of rapid gun fire?

I guess we never heard of these things because the era of instant communication and 24/7 news hadn't yet ripened.

Maybe that's a good lesson to learn from all this. With today's instant communications, things that seem new may actually be old news. It's like people who feel the world is more violent today than in the past. I tell them i don't believe it, i think we just know of more violence today than we did, say, 30 years ago.

Rapid worldwide communications can distort our view of the world.

Thanks. I think I'll point to this thread in the future when people are complaining about how martial law is just around the corner, Pretty good evidence here that people have been saying this for a long time.

jvnk08 said:
Thanks. I think I'll point to this thread in the future when people are complaining about how martial law is just around the corner, Pretty good evidence here that people have been saying this for a long time.
Click to expand...

I've saved all this info for the same reason ... for all the people crying "martial law." And what i found above was really a cursory check of past hysteria by the usual suspects (Alex Jones). In fact, the very first page i check from 1999 had all this stuff on it. Apparently America has been under a martial law invasion for over 12 years now. Not a very effective invasion for a government that can plan, execute and coverup every detail of the 9-11 attacks.

keefe said:
obviously nothing to do with martial law in usa - probably just practising for this sort of thing

More detail on that incident:
http://en.wikipedia.org/wiki/Ishaqi_incident

The Ishaqi incident refers to the reported mass murder of Iraqi civilians allegedly committed by United States forces in the town of Ishaqi in March 2006. After the incident, Iraqi police accused the US troops of rounding up and deliberately shooting 11 people, including five children and four women, before blowing up their house. A US military spokesman at the time responded that it was "highly unlikely that [the allegations] were true".[1]​ US authorities said they were involved in a firefight after a tip-off that an al-Qaeda cell leader, Ahmad Abdallah Muhammad Na'is al-Utaybi, was visiting the house. According to the Americans, the building collapsed under heavy fire, killing four people—a suspect, two women and a child.[2]
​
The incident immediately raised questions by U.N. investigators as revealed by diplomatic cables released by Wikileaks.[3]​ In June 2006 the US indicated they were re-investigating the incident,[4]​ after the BBC obtained a tape from "a hardline Sunni group" that appeared to contain evidence supporting the allegations of the Iraqi police.[2]​The investigation found, on June 2, 2006 that US military personnel had followed the proper procedures and rules of engagement, and that they had done nothing wrong.[5]​The Iraqi government immediately rejected the results of the US probe, stating they would continue their own investigation.[6]​

My journey out of the woo