Jeffrey Orling said:
@Joe Hill Presumable the structural failures could be initiated by destroying key components and initiating a run away progressive failure. So for example the support for TT1 if disabled...
Click to expand...

@Joe Hill
I don't know and I believe that all the observed movements were caused by INTERIOR structural failures... including the fold in the north face.

The motion also might be a DIPPING of the face which would appear as folding... or both.

The cause was the the timing if the interior failures which led the the floor plates separating from the east face ahead of the rest of the facade. The collapse form is likely a matter of mass distribution and the geometry...

So if CD initiates failures low down in the east side the collapse form will look as observed.

An engineered demo sets up a sequence of axial failures to control as much as possible where the mass falls. Often the scheme will structurally hollow out the building and the slabs remain connected at the facade and act like cantilevers and cause the face to fall inward. The demo is engineered based upon the structural design.

It's hard to sketch the "sequence" in a single image. And it hard to know. All we can see is the north and west face. But for sure they did NOT lag in the collapse.

1. failure in axial support in East region
2. east side floors collapse... EPH comes down,
3. floor collapse progresses westward involving entire foot print
4. initial floor debris piles up in east side bulges outward from the foot print causing 7 stories of facade at east facade to collapse/buckle
5. progressing floor debris piles up in balance of foot print pushes outward from the foot print causing seven stories of facade at balance of perimeter to collapse/buckle.
8. Facade descends 100+ feet at free fall and then slows when 8th floor of facade encounters ground and resistance where it is crushed.
9. facade begins to break apart in to large areas and top sections are seen on the top of the debris pile. 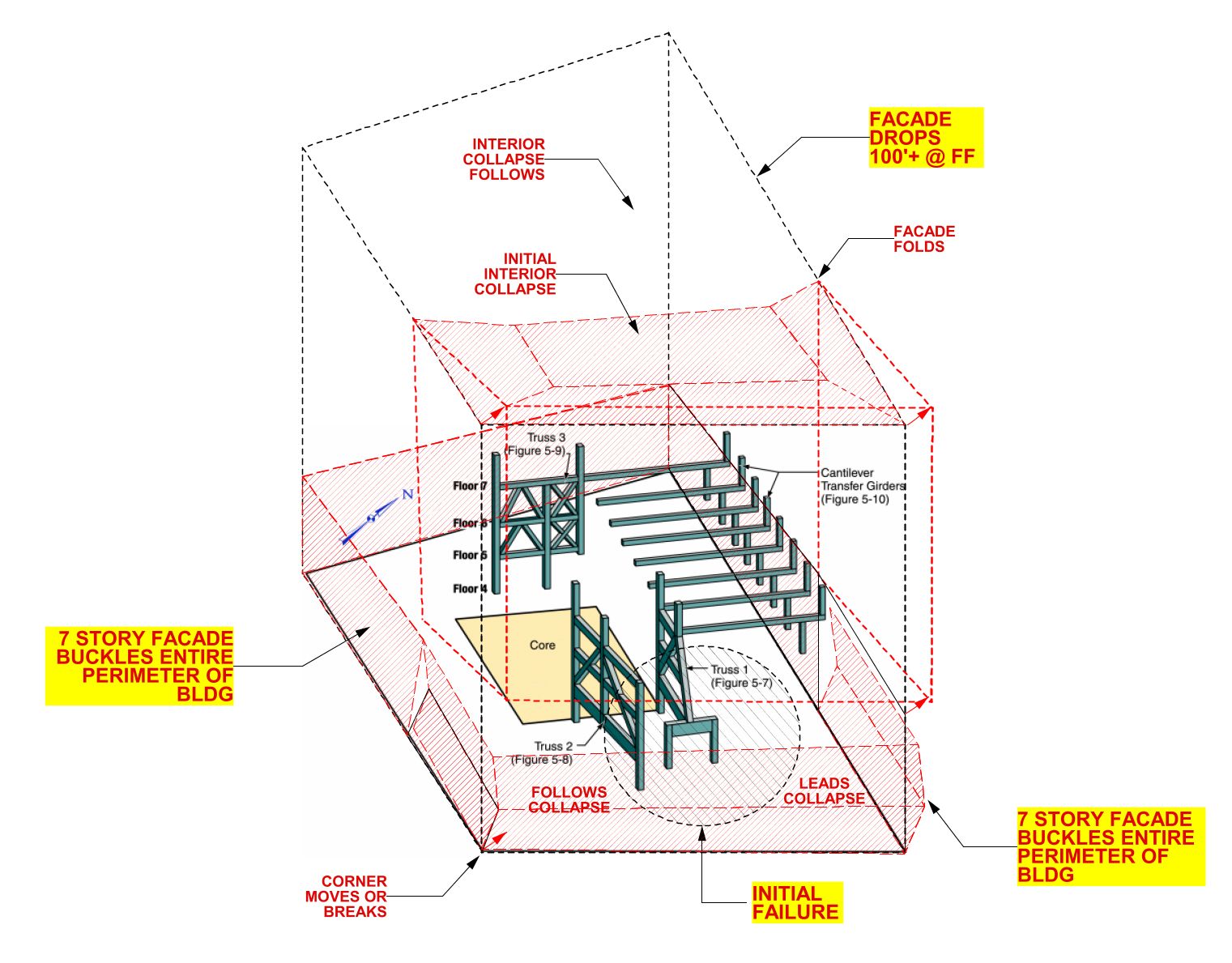 The buildings "parts" collapsed... which means that what wast supporting those parts lost its stuctural /axial capacity. Id the support lost was "asymmetrical" a moment will develop and the part will tip as well as fall. Parts were interconnected... the building was no a structure of jenga blocks.

What I see is:

What I can't see but what I suspect is:

That collapsed east side material began a progressive failure east to west low down in the building and likely involved the massive transfer structures on floors 5 -7. This led to the "undermining" / destruction of all axial load paths inside the tower..

and tI can see the roof structures collapse as the facade starts to drop... as FF

It drops 100+ feet with no resistance so it accelerates at about G. Then the "shell",, curtain wall and moment frame hit ground and slow in a crush up.

The east side of the north face does no LURCH north... it is pushed north because of the asymmetry of the plan form and that the mass collapse began there AND it was supporting a 2 way slab.

A CD would have to imitate the sequence of the initial failures (wherever they were in the east side)... the so called straw that broke the camel's back. It may require... as CD often does... pre weakening of beams and columns to control / direct the way the collapse progresses.
You must log in or register to reply here.

Debunked: "The North Face of Building 7 Was Pulled Inward"
2

Related Articles
Does NIST not testing for explosives and not testing WTC7 steel invalidate everything
NIST's Response to AE911Truth's WTC7 Girder Objection
Final Report: Hulsey/AE911Truth's WTC7 Study
TFTRH #25 - Jason Bermas: Producer of Loose Change, Shade, Invisible Empire
Debunked: AE911T: CNBC Anchor Ron Insana claims Building 7 a Controlled Implosion
Sept 3, 2019 release of Hulsey's WTC7 draft report: Analysis
WTC7: Determining the Accelerations involved - Methods and Accuracy
A wider perspective on the WTC7 collapse
Some New-ish WTC7 Photos (and video?) Corner Damage
Debunked: NIST's Lack of Explanation for WTC7 Freefall [They Have One - Column Buckling]
Debunked: WTC7 was the only building not on the WTC block that had a fire on 9/11
WTC7 South Side Photos
WTC7 Smoke Movement Before and After Penthouse Collapse
How could the interior collapse in WTC7 Move West Without More Visible Exterior Damage
WTC7: Is AE911's (and NIST's) Focus on A2001 Justified if it Was Not "Key" in NIST's Global Model?
WTC7 Penthouse Falling Window Wave
The Role of Diesel Fuel in WTC7
First Interstate Tower Fire - Comparison with WTC Towers and WTC7
Kai Kostack's WTC7 Collapse Simulation using BCB and Blender
Have You Actually READ the NIST Report on Building 7?
How Hot Could The WTC7 Fires Burned, and How Hot could the Steel be?
Did NIST examine Steel from WTC7?
Movement of Column 79 as Expressed in WTC7 UAF Presentation
Debunked: UAF Study Shows WTC7 Could Not Have Collapsed from Fire
Debunked: CIA Agent Confesses On Deathbed: ‘We Blew Up WTC7 On 9/11’ [HOAX]
Tehran Plasco Highrise Fire And Collapse - 9/11 WTC7, WTC1&2 Comparisons
What is this woman hearing as WTC7 collapses behind her
How Buckling Led to "Free Fall" acceleration for part of WTC7's Collapse.
Other WTC7 Investigations: Aegis Insurance v. 7 World Trade Company Expert Reports
Debunked: "WTC7 Sound Evidence of Explosions" by Chandler/AE911T
AE911 Truth's WTC7 Evaluation Computer Modelling Project
Sulfur at WTC7: how could it come from gypsum as the BBC claimed?
Why little to no analysis of steel from WTC7?
AE911 Letter to Inspector General Claims NIST WTC7 Report is Provably False
WTC7 Firefighting
WTC7 - Can YOU Spot The Difference?
The plausibility of demolishing WTC7 with explosives on 9/11
How much of the Smoke Around WTC7 actually from WTC7?
What would a new WTC7 Collapse Investigation look like?
WTC7 and other Buildings, the Significance of Sheer Studs
WTC7 Fire Temperatures and effects on the East Floor System
Significance of WTC7
FDNY Chief Daniel Nigro's statement on WTC7
Critical Errors and Omissions in WTC7 Report Uncovered
How could WTC7 Possible have fallen like it did?
The Uniqueness of the WTC7 Collapse
WTC4 fire photo labeled as WTC7 on 911 memorial timeline site.
Debunked: WTC7 vs. Chechnya's Tallest Building Fire (Grozny-City Complex)
Debunked: AE911Truth's WTC7 Explosive Demolition Hypothesis
Debunked: 9/11 Melted cars near WTC7
Share:
Facebook Twitter Reddit Pinterest Tumblr WhatsApp Email Share Link