Why Does the Atmosphere Not Fly off into the Vacuum of Space?


One of the great things about "Flat Earth" theory is that it provides some great opportunities for thinking about, investigating, and explaining a variety of basic science concepts.

Now, everybody knows that if you have an alien in your spaceship, the best course of action is to blow a hole in a window, and the alien will get sucked out. Problem solved!

So we all know that if you've got some air under normal pressure, and there's a vacuum next to it, then the air will rush over to fill the vacuum. 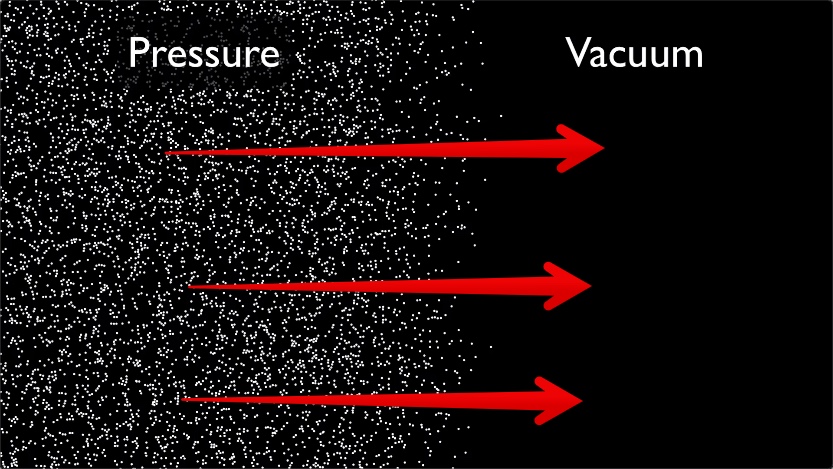 But the Earth's atmosphere is under normal pressure, and there's nothing between the atmosphere and the vacuum of space. So why doesn't all the air on Earth get sucking into space. 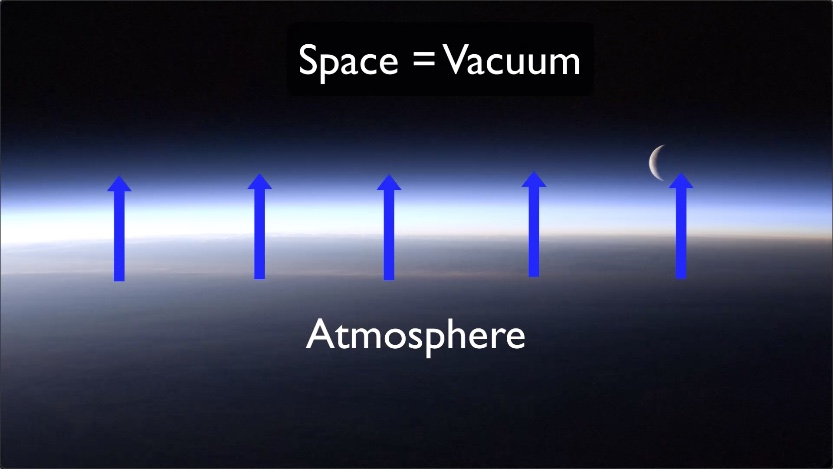 The answer of course is gravity. Gravity is holding the atmosphere down. But how does that work exactly? How does gravity keep the air in my room at a constant pressure? 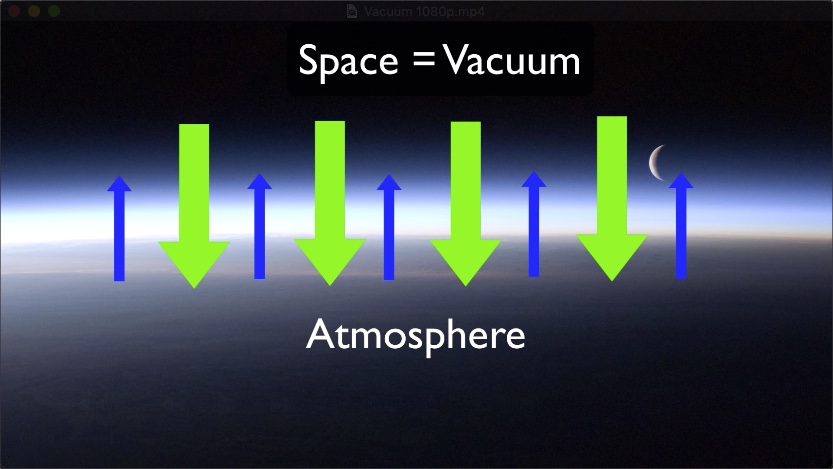 Well to understand how that, you've got to think about what the atmosphere actually is.

The atmosphere, the air, is a gas, a mixture mostly of nitrogen and oxygen. Like all gasses it's just a bunch of molecules flying around. 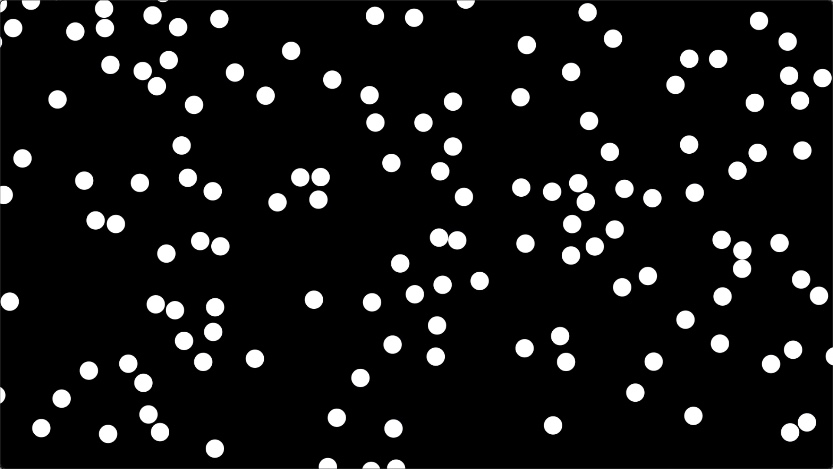 Now we are used to thinking of the atmosphere in terms of air pressure, but to understand that, you have to consider the motion of individual molecules. Let's do some thought experiments in a simplified universe. 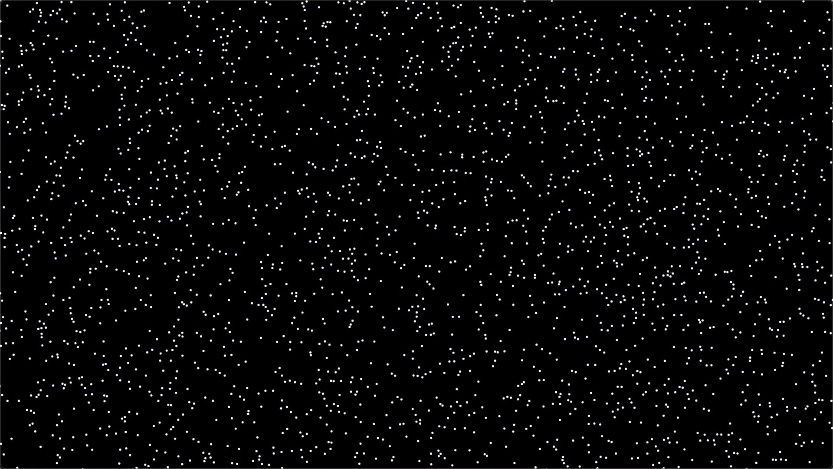 Let's say the universe contained nothing at all except for some gas molecules. Since molecules are really just like tiny little objects they behave like other objects would in space. The gas molecules would just move in straight lines, not changing direction unless they happened to collide with each other. The universe would just continue like this, gas molecules moving around. (Eventually they would cluster together and form nebulae and stars, but that's another story.)

So suppose we add a planet into the mix? How would that change things? 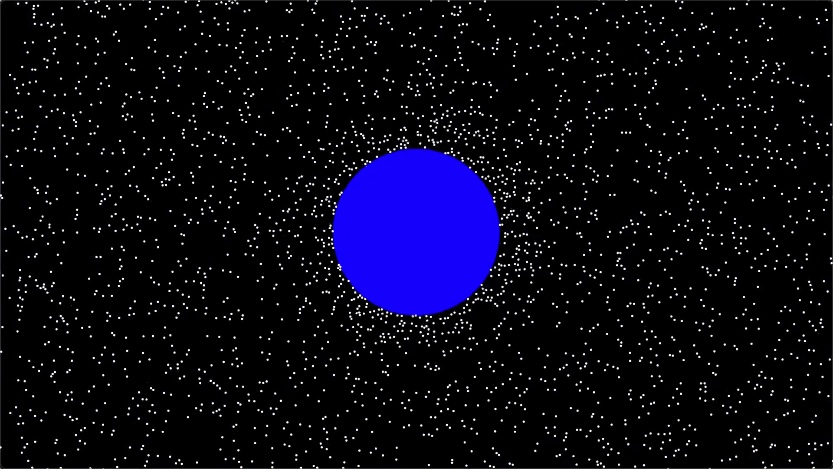 Suddenly our universe has a strong gravity well. All the nearby gas molecules are attracted down to the planet, so they tend to move in that direction. Now adding a planet like that has created a whole bunch of potential energy, so things speed up and slosh around for a bit (see video, above). But eventually they settle down. 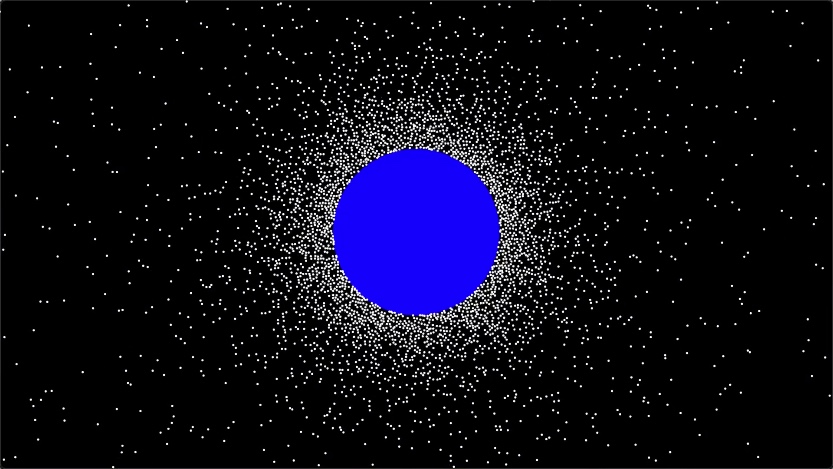 What do we find? The planet has acquired an atmosphere! No only that, but it's one where the density of the atmosphere decreases as you get higher. Most of the molecules near the planet's surface are bouncing around, colliding with each other, and colliding with the objects around them. It's those collision that make air pressure.

But the ones off in space are just following ballistic trajectories, and because there's so few molecules there's far fewer collisions, and so very little pressure, if any.

So we can see that there's no reason for the atmosphere to fly off into space. All of the atmosphere is being pulled down towards the planet. The only reason why air rushes to fill a vacuum down on earth is because the molecules are bouncing around so much they just fill up any empty space.

Let's look at this in a bit more detail. Here the bottom of the screen is surface of the planet. 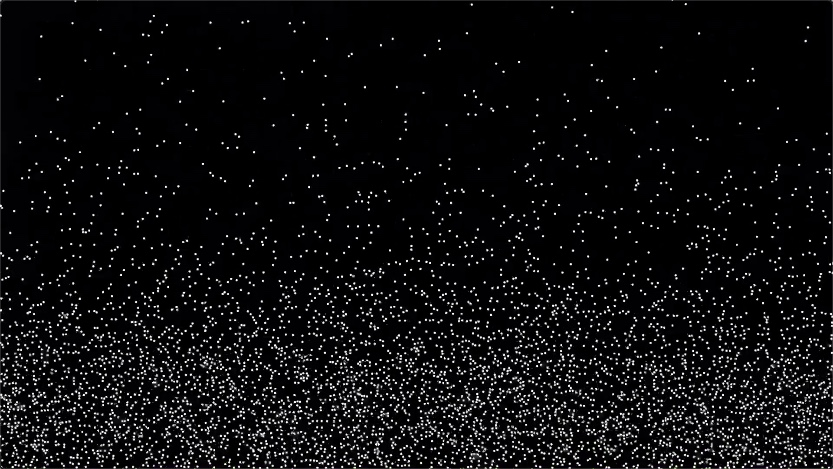 Again we see a pressure gradient, with a vacuum at the top and sea level at the bottom. You can also see there's no compelling reason for the molecules at the top of the atmosphere to whizz off into space. Some of them do, but gravity keeps most of them returning to earth.

Another thing you can see here, there isn't really an edge to the atmosphere, it just gets thinner and thinner, and the molecules get further and further apart. It never really ends though. Even in the space between galaxies, the hardest vacuum there is, there's still about one atom per cubic meter.

Fantastic, I had in mind to write a python script to simulate that very experiment, just hadn't got around to it yet.

Astro said:
Fantastic, I had in mind to write a python script to simulate that very experiment, just hadn't got around to it yet.
Click to expand...

The code I used was a bit slapdash. I'm working on something more user-friendly. Work in progress here:
https://www.metabunk.org/gas/
Last edited: Nov 1, 2018

Mick West said:
The code I used was a bit slapdash. I'm working on something more user-friendly. Work in progress here:
https://www.metabunk.org/gas/
Click to expand...

Could you post the source code? I can try and optimize it.
Last edited by a moderator: Nov 1, 2018

Travis Hunt said:
Could you post the source code? I can try and optimize it.
Click to expand...

That is the source code. It's just a some javascript. I can optimize code, but this really needs to be implemented GPU-side to work well in a browser environment.

Mick West said:
and the alien will get sucked out
Click to expand... 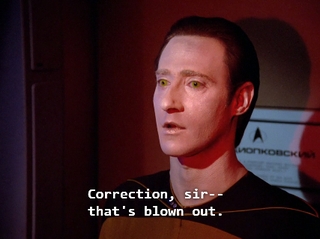 That very notion needs to be specifically addressed.

Naive intuition says vacuum pulls. And it also follows that a big vacuum will pull harder than a small vacuum. After all, doesn't an ocean liner pull harder than a rowboat? Therefore the infinite vacuum of space would pull infinitely hard. I've seen this argument from many FE Believers.

The gas simulator is supposed to illustrate that the "energy" seemingly apparent in a vacuum on Earth is all due to the motion of air molecules. Adding more nothing really does nothing.

However, there IS a difference. Vacuums on Earth fill up (try right clicking on a region of the atmosphere). But the Vacuum of space does not. So in that sense it does actually "suck harder" - or at least longer.

Staff member
I've started a thread for the simulator in the tools forum:
https://www.metabunk.org/gas-universe-simulator.t10102/

Your material is correct of course, but I think you should start on a more basic level.

I've had some success explaining it this way: Two guys are facing each other with a rectangular board between them. The board is smooth and they have their hands flat on its surface. No one is pulling. They're both pushing. As long as they push equally hard nothing happens. When one pushes less hard he gets pushed back. No one is pulling anything. That's what happens to the walls of a metal can when you hook it to a vacuum pump. Nothing is pulling the can in. The air outside is crushing it in. No one says a submarine gets pulled in by the air inside. We say it gets crushed by the water pressure outside. If the sub springs a leak, nothing is pulling the jet of water in. It's getting pushed in. Maybe some seaweed or starfish get pushed in along with it.

Nothing gets sucked into a vacuum cleaner. The air pressure inside the cleaner is weaker than the pressure outside, so the outside air pushes forward. The vacuum cleaner causes a wind. On a windy day, wind pushes stuff along with it. The wind moving into the vacuum cleaner pushes stuff, just like in the wind in a alley. It's pretty funny to think of trash and dust in an alley being pulled by something. It's pushed.

It doesn't matter if the alien is getting sucked or blown, its 6 of one; half dozen of the other.

Staff member
Yeah, I think it's a tough thing to convey. Sucking IS a force, for most people. When you suck a drink through a straw it's really the atmosphere pushing down of the surface of your drink in the cup that's doing the work. But you had to exert force to make the reduced pressure in your mouth and the straw, so it really feels like there's something going on there.

Of course explaining it in term of molecules is not going to work for a lot of people either.

Well, at least I've got a fun gas molecule simulator!

That reminds me of t-shirts that were popular with the science club in college, “Space Doesn’t Suck”!

Staff member
This is my atmosphere simulator. The grenadine syrup is the air, and the orange juice is the vacuum of space (only with more tequila in it). There is no barrier keeping the syrup at the bottom, and yet it gradually becomes less and less concentrated higher up the glass, until by the time you reach the top there is none of it. 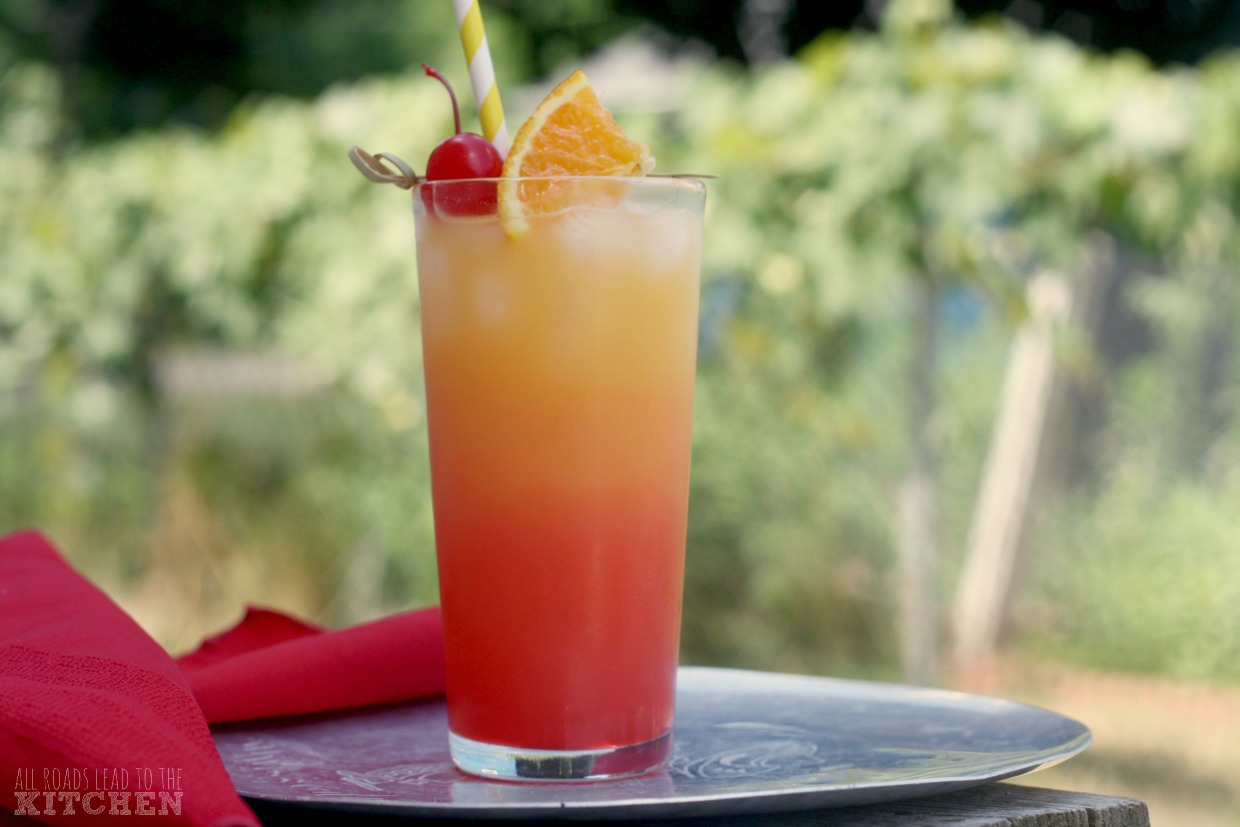 Of course, diffusion eventually makes this demonstration less effective, so you have to, uh, dispose of it and prepare a fresh one every so often

Trailblazer said:
The grenadine syrup is the air, and the orange juice is the vacuum of space (only with more tequila in it)
Click to expand...

Unfortunately not a perfect model, as the orange juice is full of molecules too. Still, one can do vacuum experiments with the straw while pondering this.
C

I remember as a child furiously insisting that breathing in went like this:
I refused to believe that the ribs and diaphragm move down and out first, increasing the volume in the chest cavity, lowering the pressure in the lungs below that of the atmosphere, resulting in the air pushing in.

Mick West said:
The code I used was a bit slapdash. I'm working on something more user-friendly. Work in progress here:
https://www.metabunk.org/gas/
Click to expand...

Still better than mine. I finished up my work in progress to at least produce a video. Very similar result as you'd expect, but not as fast or user friendly as your Java solution:
The fact that our videos so closely resemble each other even though we coded them independently in two different programming languages just shows how consistently the science behind it works regardless of who is testing it.

Astro said:
I finished up my work in progress to at least produce a video.
Click to expand...

Nice. It's a bit odd that it ends up elongated though, I think you must have a bit of a bug in there somewhere. 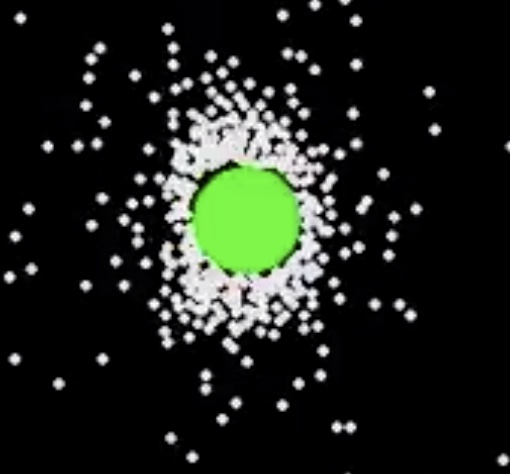 Speed-wise, it's probably faster to use a 2D vector for velocity, rather than angle and speed.

Mick West said:
Nice. It's a bit odd that it ends up elongated though, I think you must have a bit of a bug in there somewhere.

Speed-wise, it's probably faster to use a 2D vector for velocity, rather than angle and speed.
Click to expand...

Yeah I'm not sure what that's about, I think I might be calculating the vector the gravity slightly wrong, but I'm pretty much done with the project at this point. Your approach is the better one anyway and I've got a lot on my plate with my satellite and other telescope tracking apps right now.

Astro said:
I think I might be calculating the vector the gravity slightly wrong
Click to expand...

I think it's in the planet bounce code,

Mick West said:
I think it's in the planet bounce code,

Yup, that did it.
Source: https://drive.google.com/file/d/1Lwwk4QNAO-lZgcuOvy52UUguDfRvUYLt/view?usp=sharing

Very nice job!
You must log in or register to reply here.