Ufos arrive to the central zone of Chile. (Debunked).

Hello my friends, I am Marcelo Moya from Chile. I like everything about ufology, especially analyzing cases.
I hope you like this article about the latest reports from my country.


Ufos arrive to the central zone of Chile.
​
What would be a quiet Sunday, despite of quarantine imposed by the Covid infection, the eyes pointed to the sky. Something was up there that attracted attention, of course because it wasn´t for nothing to see an object that stood out with the blue of the sky, a slow movement, silent that keept the several spectators in suspense. It was approximately 6:40 p.m. when this UFO burst into the skies over Valparaiso, appearing and disappearing in moments. Was it an object maneuvered by intelligent entities from another planet who came to observe our social and natural changes? For some people - based on their comments - everything seemed to indicate that it was. But another question arises: Was this flying object one more that came to join the others that were reported from other regions of our country?

For those who adopt the idea that "they" care about us, it was clear that yes, there was no doubt. Extraterrestrial beings were once again playing their part in our national skies. But let's take it from the top.


In the previous days, Francisco, a ufologist who lives in the southern city of Punta Arenas, contacted me to review, jointly, a video of a "ship", according to the witness.


Punta Arenas.​
Francisco, sent me two videos of - apparently - the same night of that sighting, in the images - which were made in the early morning of Sunday March 22nd - it is possible to appreciate a light that changed colors. This change in tonalities was predominantly orange, especially when zooming in and then zooming out, it was a whitish color. In the first video, only this light was appreciated, as it was in the night, there was not some element of reference in which we could say that it was in the air or on the ground. I must say that, in my experience in the observation, I noticed that this light was at a great distance, it is here where the hypothesis of a stellar body comes up, presumably a star since the changes of colors characteristic of stars or planets seen through cameras, either video or photographic, were notorious.

​
In the second video you could see part of a roof, so I could mention that it was on the heights and not close to the ground. Already known the data, such as: time and cardinal point, the primary hypothesis was increasing every minute. But it was missing the access to an astronomical chart, here is the result of that.


​
All the data obtained indicated that the witness observed Canopus, one of the second brightest stars in our night sky. The first one is Sirius, which was much lower on the horizon, therefore and because of the height where this light was captured, Canopus is the first option to explain the case.

The next case came to me from a friend on Facebook named Ger. He sent me a Twitter address where a user from the Con con commune recorded some lights with her mobile phone that caught her attention. In the video you can hear that she is seeing about three lights that, for her, were not from boats. With her address, enter the Google Earth program to see her real location. 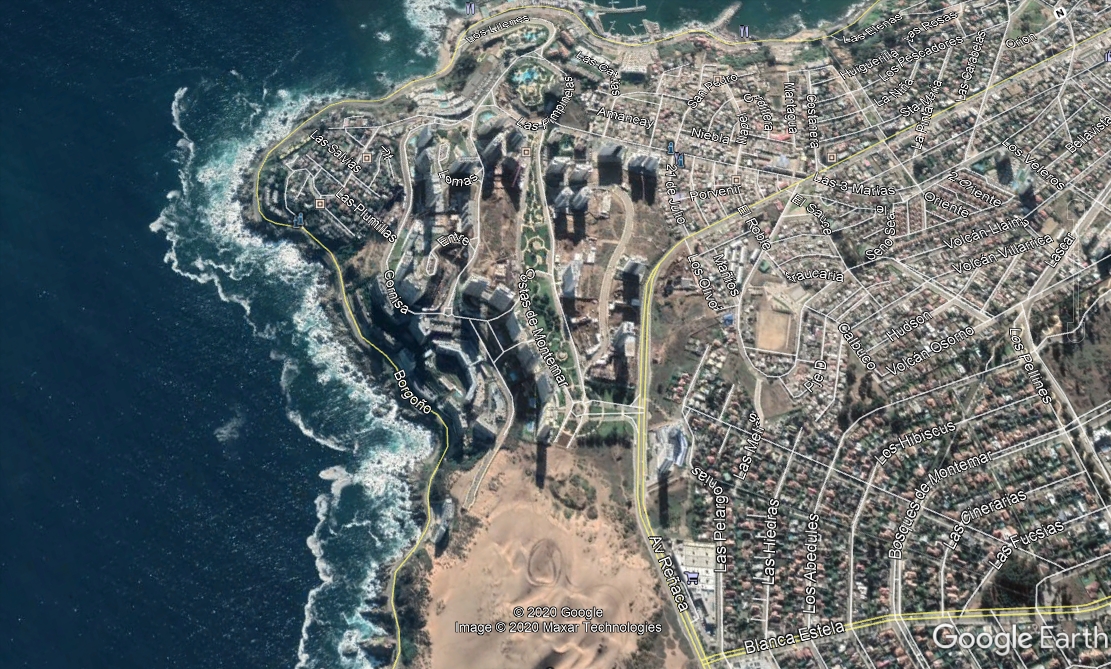 The lights were recorded from that sector. 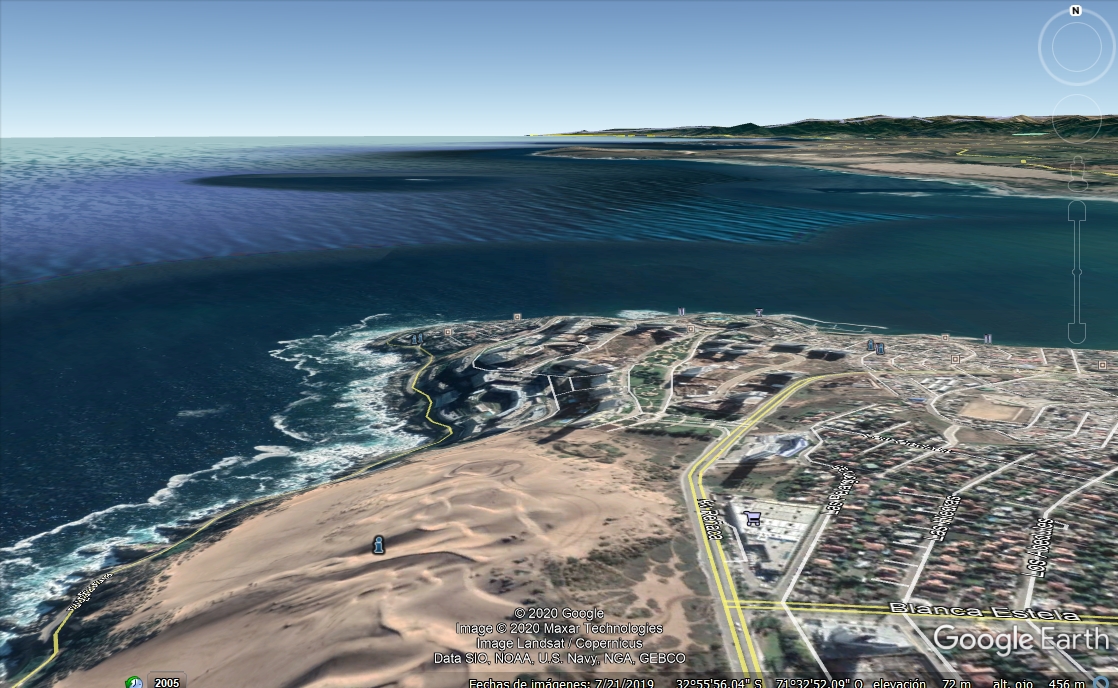 ​
To make a brief analysis of the situation, this is not related to some aerial phenomenon since what has been observed has to do with lights belonging to boats. For me it was not a surprise that someone got confused, as it was in this case, since living on the coast I am used to seeing boats that are a few miles away from the port sector. But why are the lights so different from each other? The explanation is that one of the boats is a fishing boat and the other one is a cargo boat, that's why it's more luminous and has different colors. 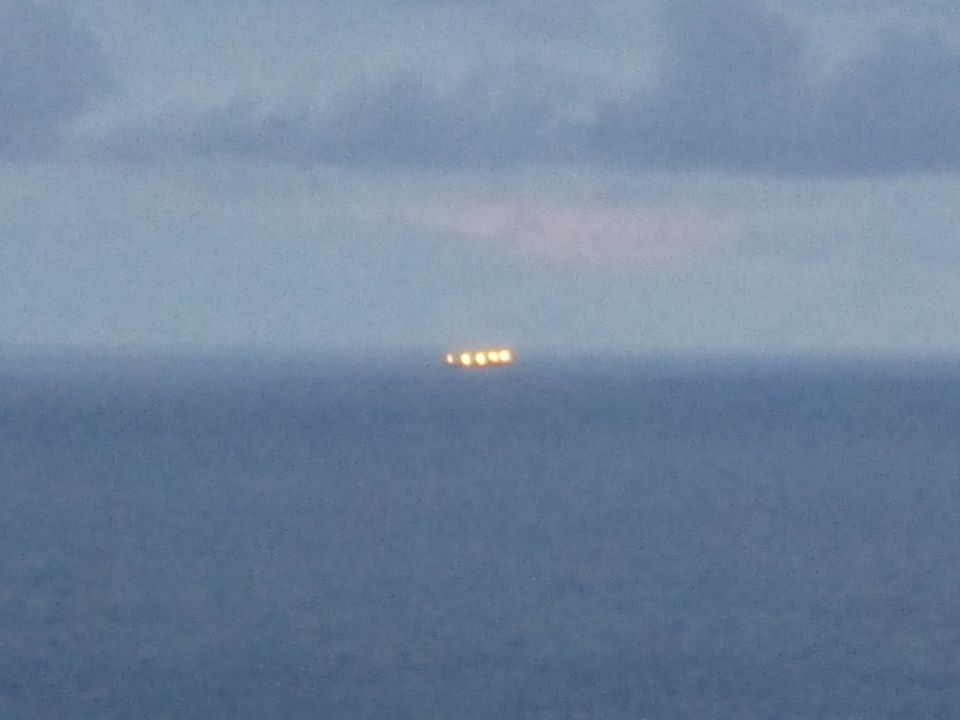 Ship's cargo, note the intensity of its lights. 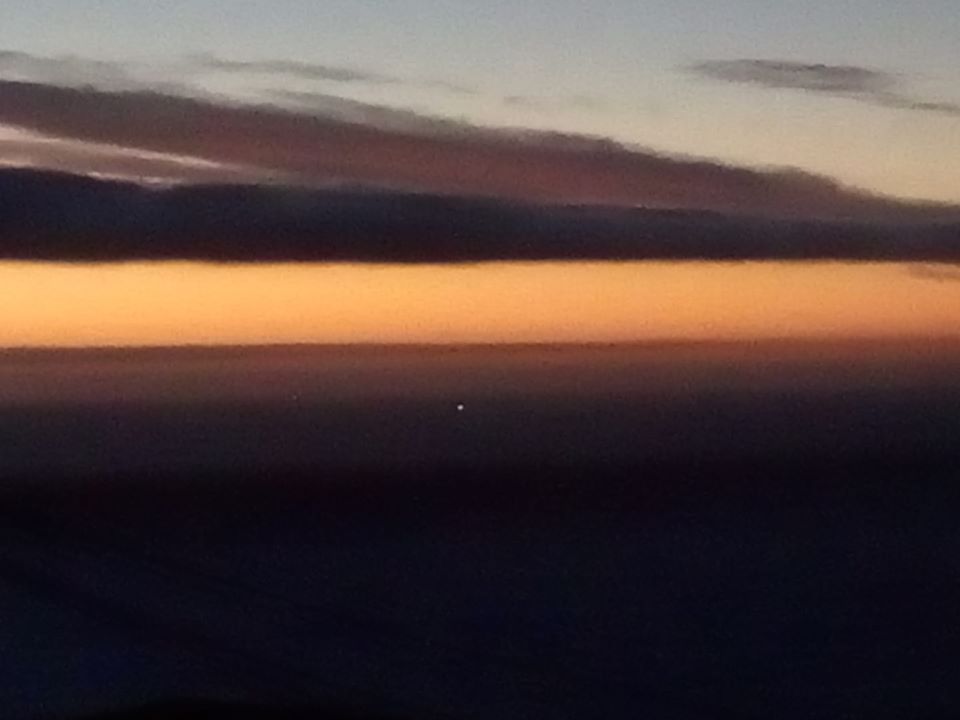 ​
Fishing boat. Its light at a distance is very powerful, these boats usually fish in certain places, also gives the idea that their light goes out, but it is because it turns on the same point of work. 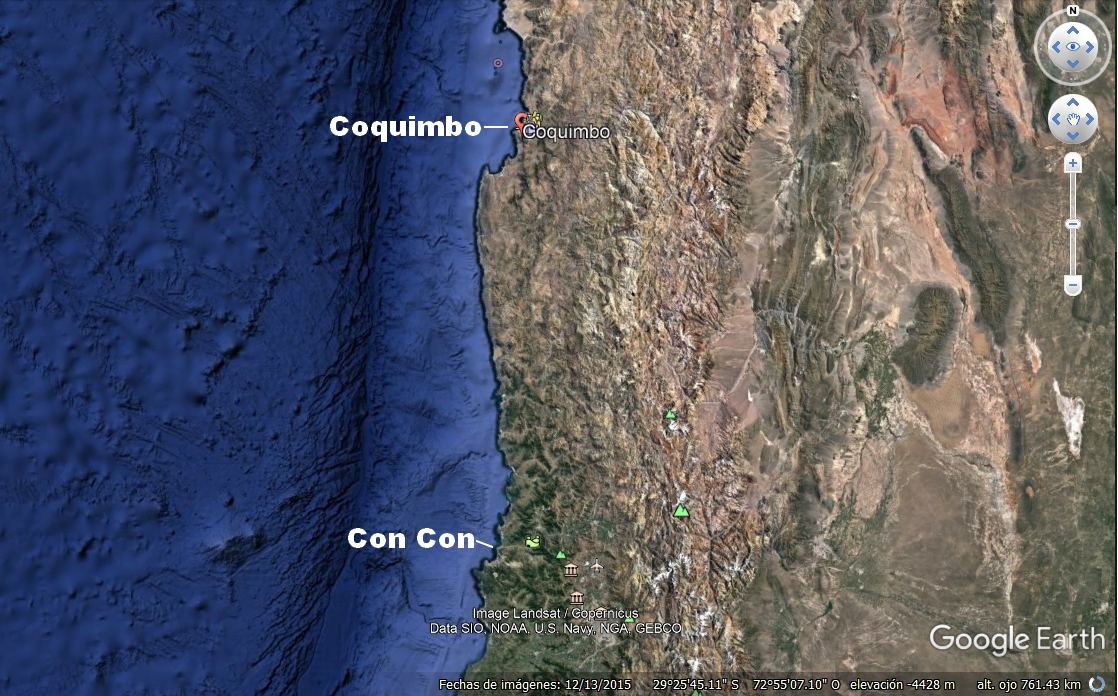 ​
In those days a light was also recorded several kilometers away, that was in the city of Coquimbo. During the sunset an object that shone quite brightly attracts attention, here the video.

​
In part of the conversation the witnesses talk about "movements", but thanks to the reference elements, which in this case is a construction crane, it can be seen that there is no such movement.Suspicious that this had a rational explanation, I again accessed astronomical charts.
​ 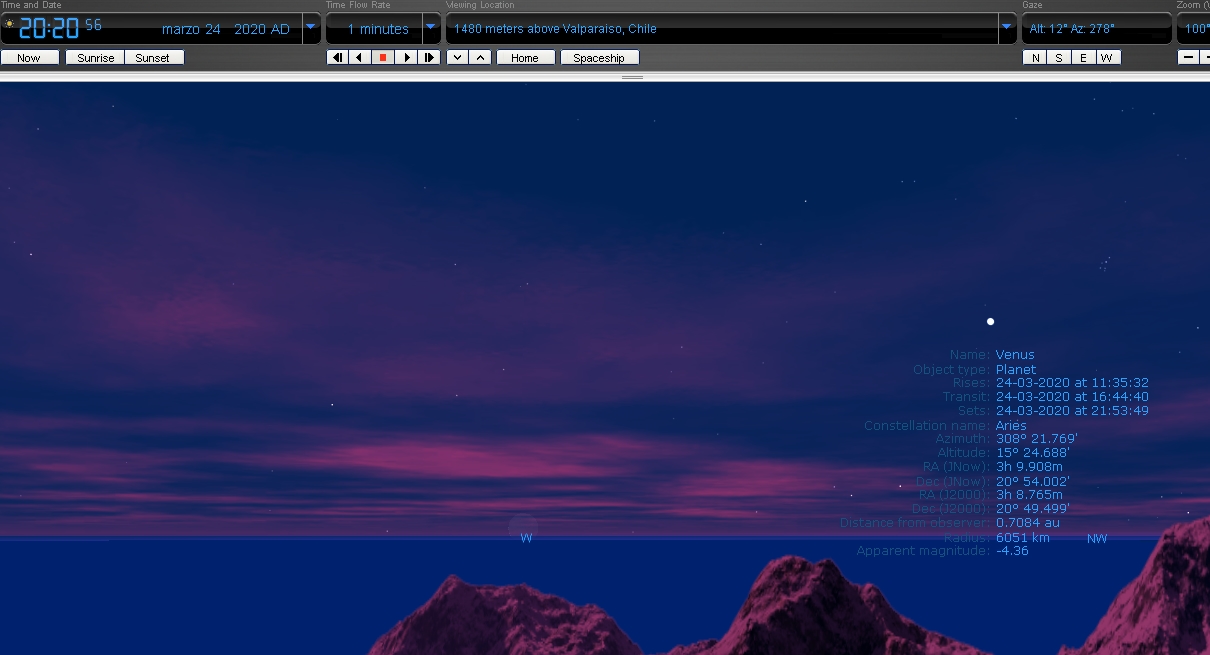 ​
Because of the stabilization that I did to the video, plus the cardinal point - West - and time, I am able to mention that that "UFO" was the planet Venus which had in those instants an apparent magnitude of - 4.36. It should be noted that this planet is the main generator of confusion, especially for those who are not familiar with the observation of their environment.


As a way to extend the analysis, record Venus at about the same time, noting the colors of the sky. The similarity between the two videos makes it clear to me that there is no doubt about the confusion.


Ufo in northen Chile.
​
This next news item rapidly spread on some websites, a UFO appeared during a night in a mining sector. No exhaustive investigation was necessary because the "UFO" mentioned was an image taken from an old video of the closing of the 1984 Olympics games in Los Angeles, USA.

As you can see, some people take the time to make jokes, which is not bad, only that some people do not take into account certain opinions that emerge from critical ufology. It is from there that it is said that it is very necessary to approach cases from a rational perspective, before starting to outline ideas regarding beings from outer space. 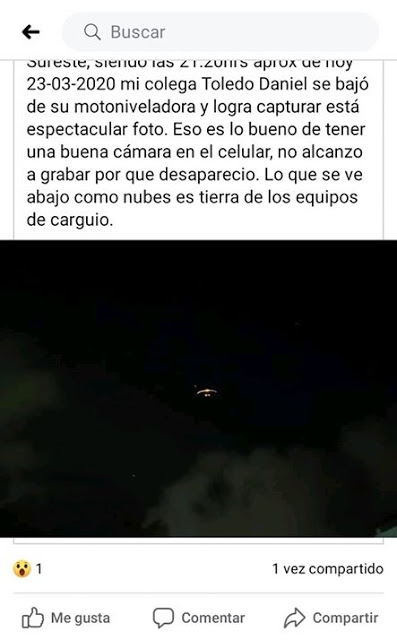 This is how the news was disseminated through social networks.


The result is obvious. 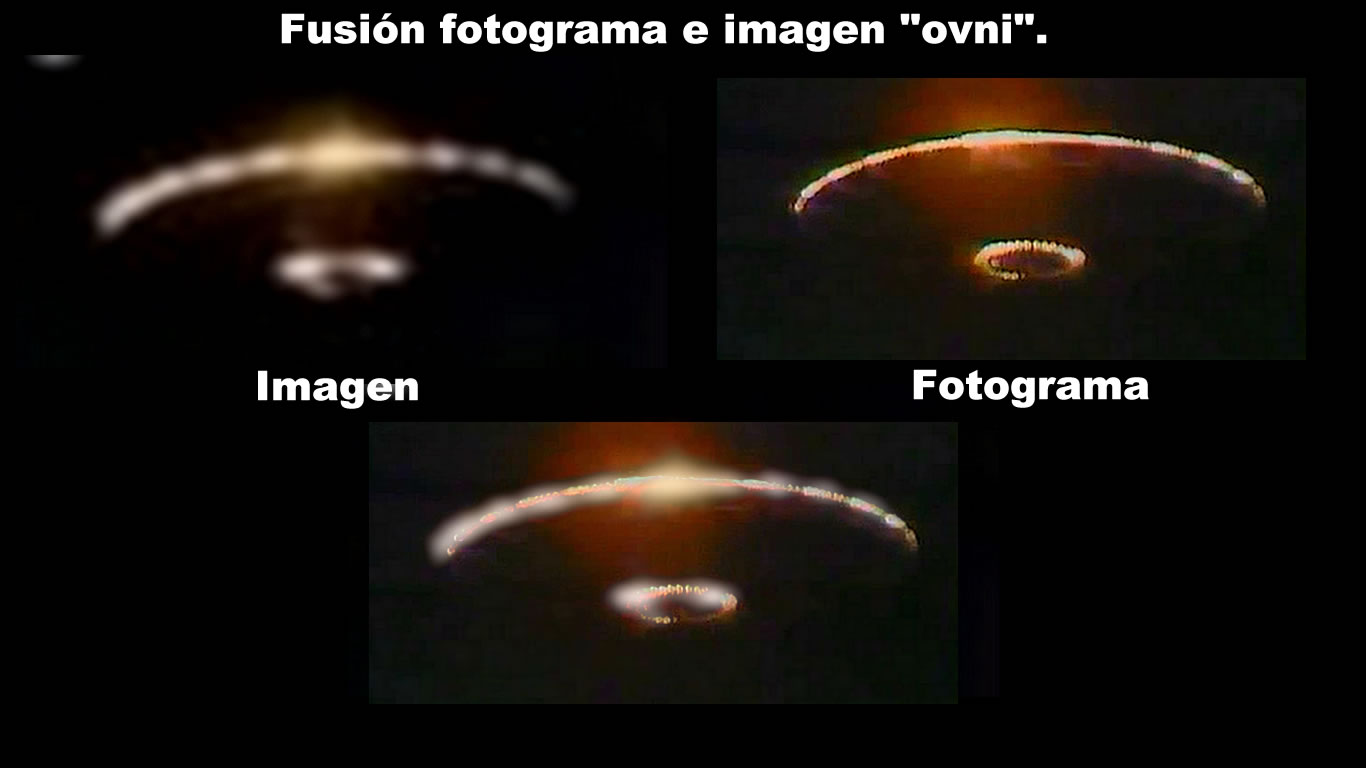 ​
As you can see, some people take the time to make jokes, which is not bad, only that some people do not take into account certain opinions that emerge from critical ufology. It is from there that it is said that it is very necessary to approach cases from a rational perspective, before starting to outline ideas regarding beings from outer space.

Few Internet users, including myself, reported that a Google Loon balloon would cross the skies over our central zone that Sunday afternoon. On my social network Facebook, several people made their questions about it, but it was time to go out and observe. The prevailing cloudiness at that time, did not let have a good observation, fortunately I was successful and I could record their passage. 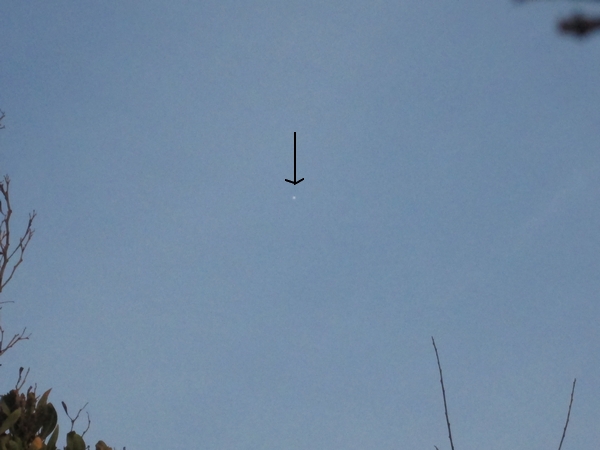 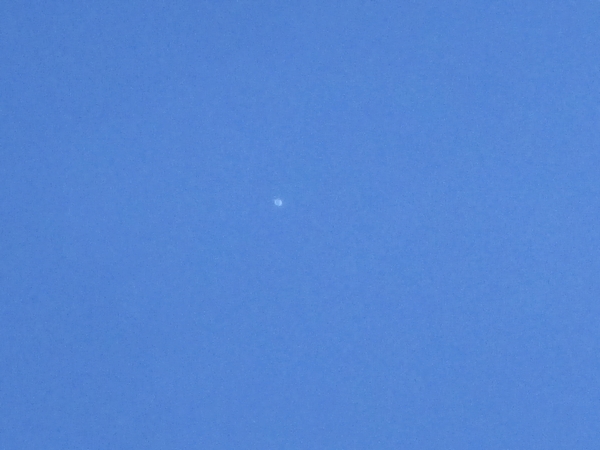 ​
What came next is a known fact among the ufological community, as those who did not have the information at hand became confused with an anomalous object.

We cannot blame those who, in a sincere way, divulge their observations, but it is necessary that these same people try to contrast data to get out of the doubts. I think it is a good way to learn about these situations.

An attractive headline, no doubt, that is aimed at an audience, even if they are not followers of this theme, to get them interested. It is no longer the long run newspapers that promote this "bombastic" news, if you wish to catalogue them in this way. The immediate news niches are the big winners in getting adherents, of course because the news is in your pocket or on your laptop very quickly.
It only takes one "click" for a range of data to open up in front of you, social networks are flooded with UFO reports, many of these without any primary analysis, it doesn't matter, it's the consumer public that matters. Are there winners in this media battle? The answer is yes, there are, but there are also several losers, those who dig deep to find out what really happened since many call them denialists or " killjoy " when it is found that everything was a fraud or confusion.

On the other hand, there have been times when our society has been faced with situations in which fear stalks it, as is the case with the natural disasters that have devastated our country, Chile. Volcanic eruptions, earthquakes and tsunamis have caused people to look up to the sky in search of these "saviors". Anyway - until the time of writing this article - there is no case directly related to anything, considered, anomalous in our area.

These facts sometimes provoke a great sensitivity that has not been diminished in the least despite the years that have passed, even though some people think the opposite, that due to technological advances they can create confidence.

Science fiction literature or movies have shown us that we can travel to colonize other planets, science on the other hand points out that this may be closer than we think. But it seems that these advances are creating, without our realizing it, an introspection from which it is difficult to get unstuck and because of that we look for something "up there" to save us from a hell that we have created... without realizing it.


Ger, for reporting the sighting in Con Con. (Twitter).

To Enrique Venegas for sending the link of the news of Coquimbo, source: https://www.facebook.com/puntonoticiosochile​
You must log in or register to reply here.