I'll start with this shot here, taken in Yorkshire at the Ribblehead Viaduct, a lovely, middle of nowhere place in England, the day was a nice clear one. 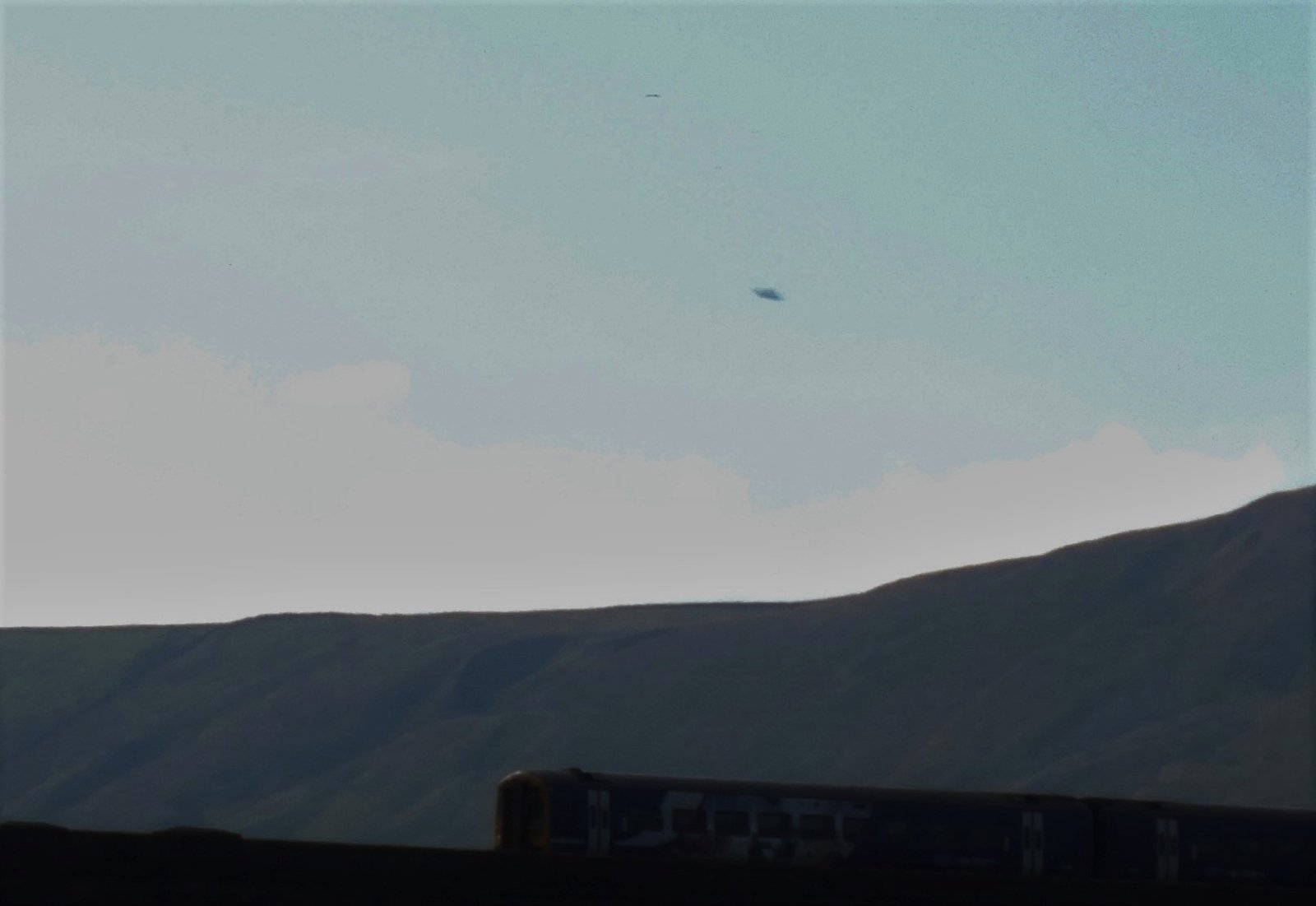 So, as you can see above this was a photograph captured by a NIKON Digital Camera (my father gets the credit for this one) I am behind him with a Video Camera (yes I captured this darker object too, it flashes over the train from this right hand edge goes off screen & then comes back into frame hugging that hillside back there heading back from where it came (this right hand side)

Now here is the thing, not only can this one be seen but if you look closely, directly above this main object & close to the mid top of this photo there is something else, it's the long so called 'cigar' shape many have mentioned with regards to UFO's (I will show you this a little later which came lower to the hillside back there)

And if this was ALL there was I would have been HAPPY but let me explain to you folks this FACT...

NONE of us saw or heard these things at the time (not many there at the time, approx. 20 people, young & old) and NOT ONE said wow! look at that thing or what was that sound...NOTHING, one to be explained hopefully be someone? beyond the obvious.

No aircraft of the normal sense & yet I will later show you something strange which appears to CHASE (seriously) this main object seen here (closer to the train) which strangely seems to resemble an F-14 Tomcat but in strange form.

The video which I have never posted online is even more AMAZING as it would appear that there were numerous other objects here at this time (including these strange SPHERES talked about by others, I didn't see them here but they WERE picked up on my video camera & have SCREEN shots I will upload at a later time)

Not birds if that's what your thinking...these sphere types (different looking to these 2 UFO's seen here) seem to go from one part of their trajectory to another by seemingly JUMPING, strange I know for such short distances but that's what they appear to be doing on the video (no lie)

You see there's a lot to deal with already...

This one above taken by my father when ZOOMED in funnily enough looks very similar to FOX MULDER's 'We Want to Believe' POSTER even down to it's slightly tilted elevation above the train.

Here is a CLOSER Zoomed in image of this OBJECT... 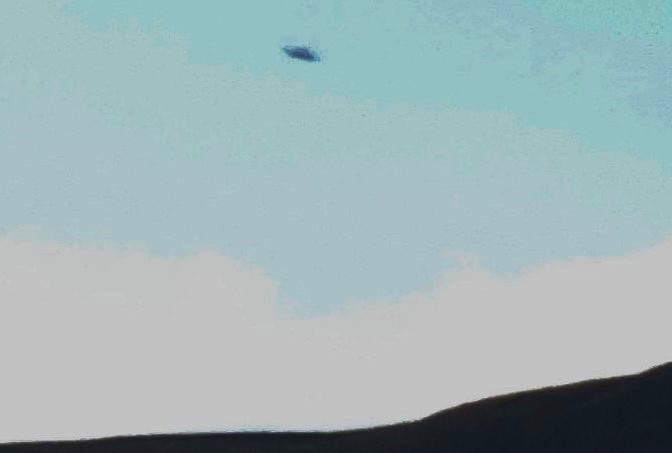 Looks like your typical 'SAUCER' don't it?
Much more to discuss here on this one & hopefully you good folks will join in with some ideas? if you think this a bird though then your going to have to go some to convince me.

Now, if your curious about that longer object? well here it is... 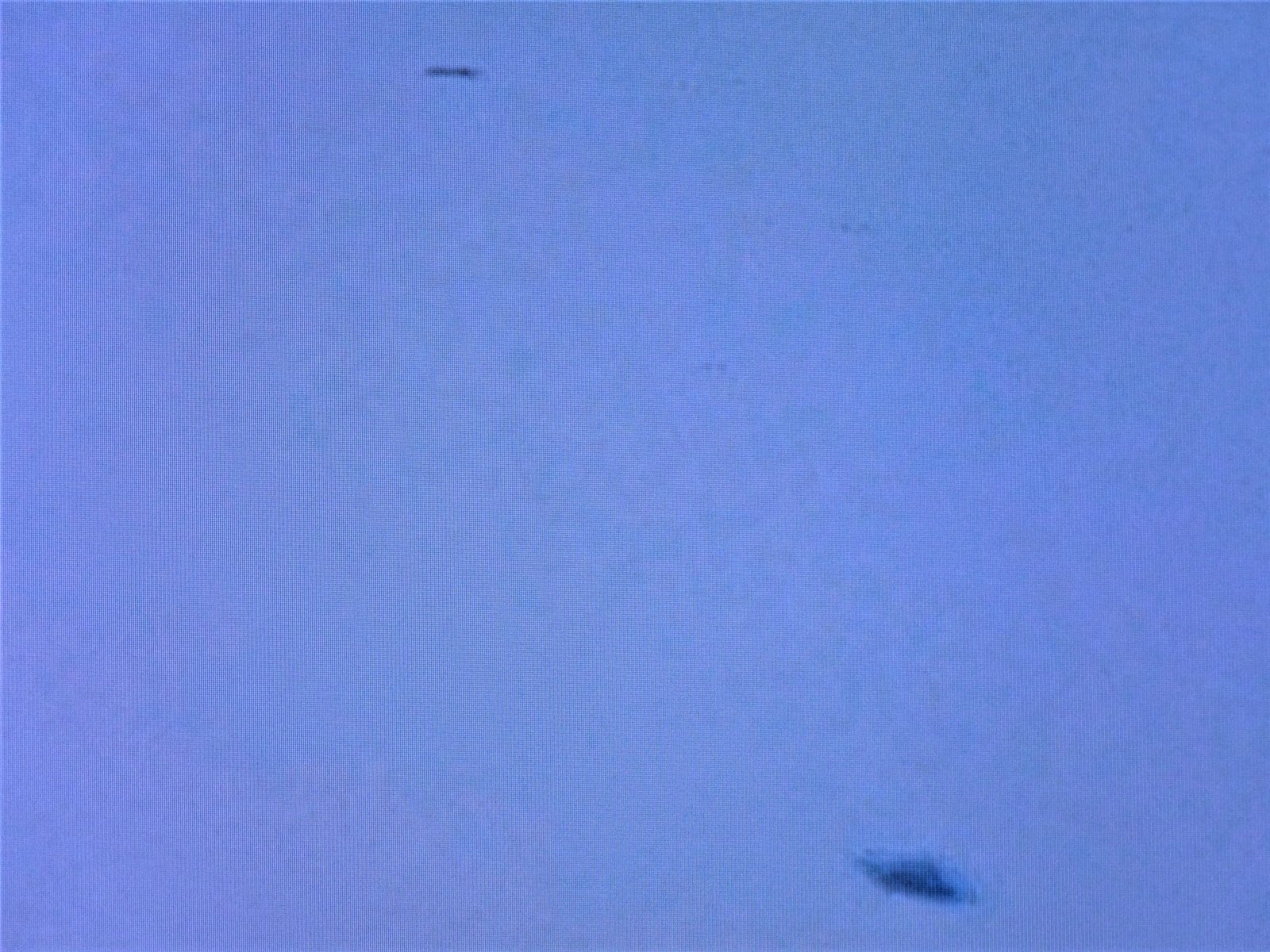 Now I can't say for sure if this is the same OBJECT but it is long like this one above this SAUCER? and you might notice that the one here has a circular section or protruding section? over to the right hand side of it here.

So is this the same object here below? or a different one?
I'll post the original photograph captured (which I stupidly & by accident edited to this smaller size...ARGGHH) then the ZOOMED in close up's which to me brings about all kinds of questions... 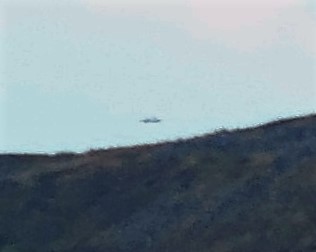 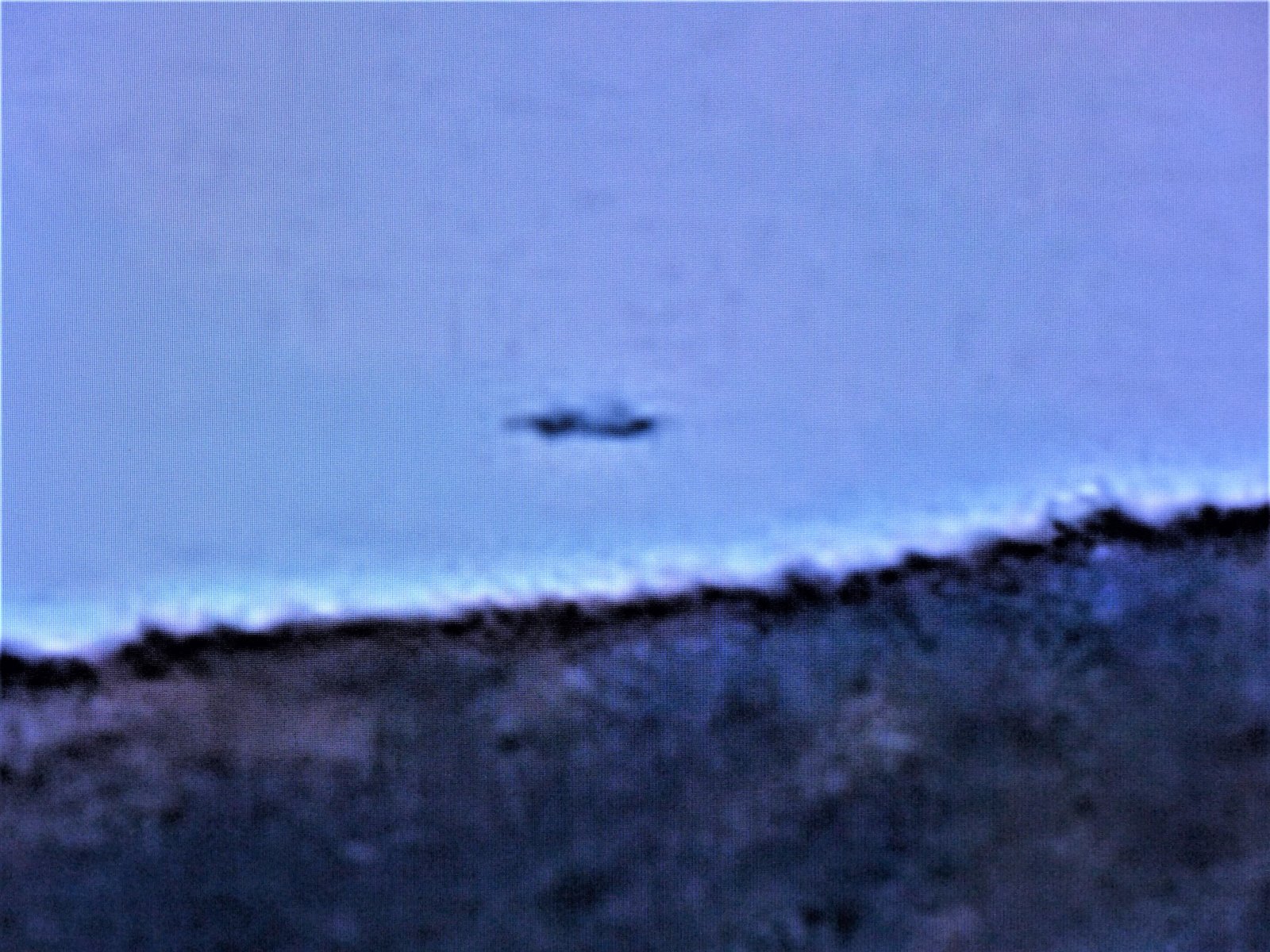 What do you folks make of that?
I'm almost waiting for the DRONE? KITE? or HANGLIDER response from one of you?
Well we SAW no such thing...close up or in the distance, we'd have remembered it but then when you put this strange looking object together with the SAUCER one (flew over the train), the sphere types I can only think these are either OTHER WORLDLY or Experimental Craft by you know who?

Well this was supposed to be just one incident of two I was going to show you folks but I think i'll keep them separate as they happened at different times in different places.

This Occurrence was approx. 3 years ago (2015 in September)

I have MANY more photos & screen shots that i'll upload here for you folks to mull over along with a very strange incident when first viewing that saucer one on our PC for the first time.

Staff member
There's not a lot to go on here. It's a photo of two objects that are unidentified, but which are probably birds. It's not really interesting.

Here is a photo of a flock of birds, with a little horizontal motion blur. If you were to isolate any single bird (other than some of the close ones at the top) then it would be an unidentified flying object. 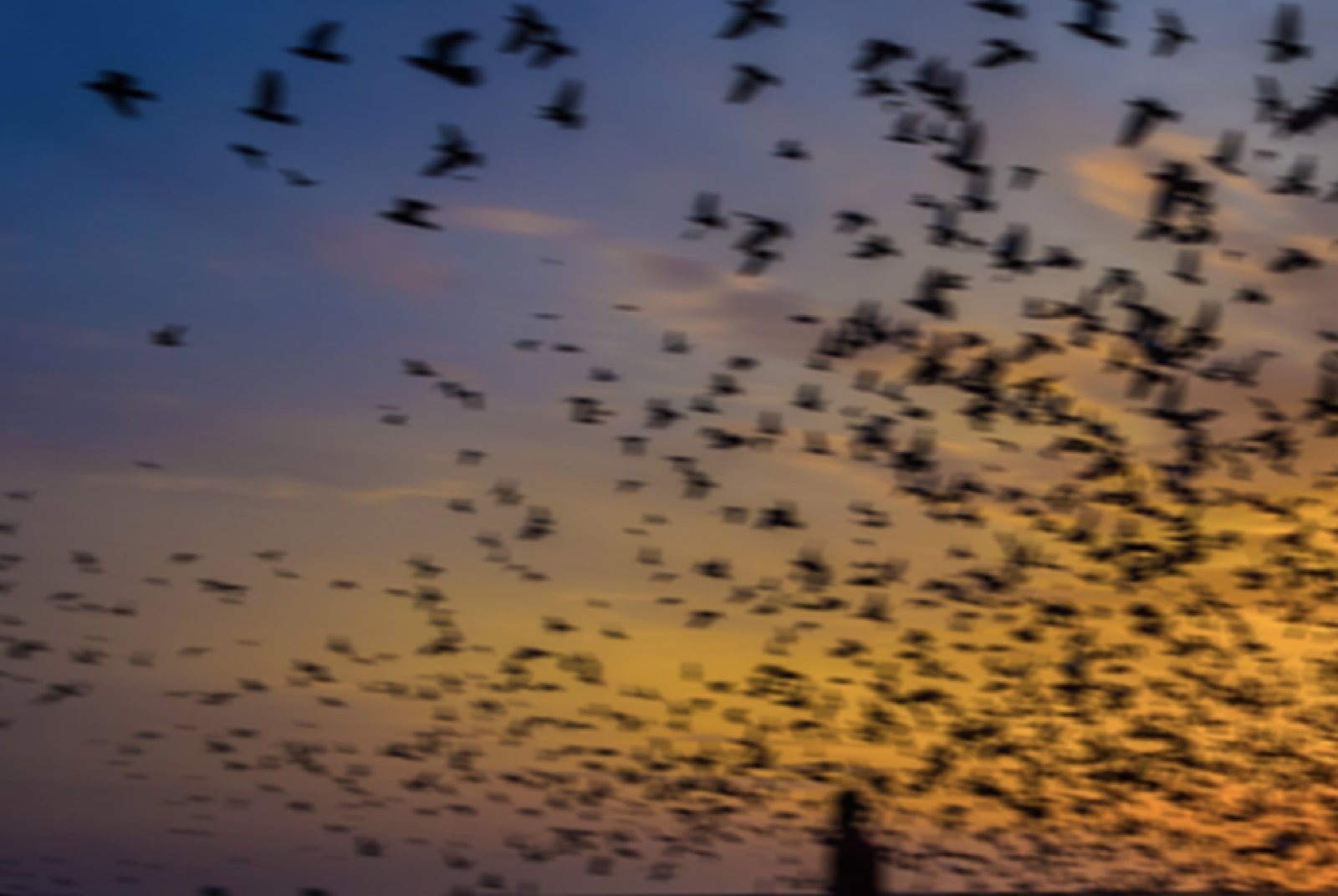 Even without the blur there's still lots of shapes that don't immediately make sense as a bird. 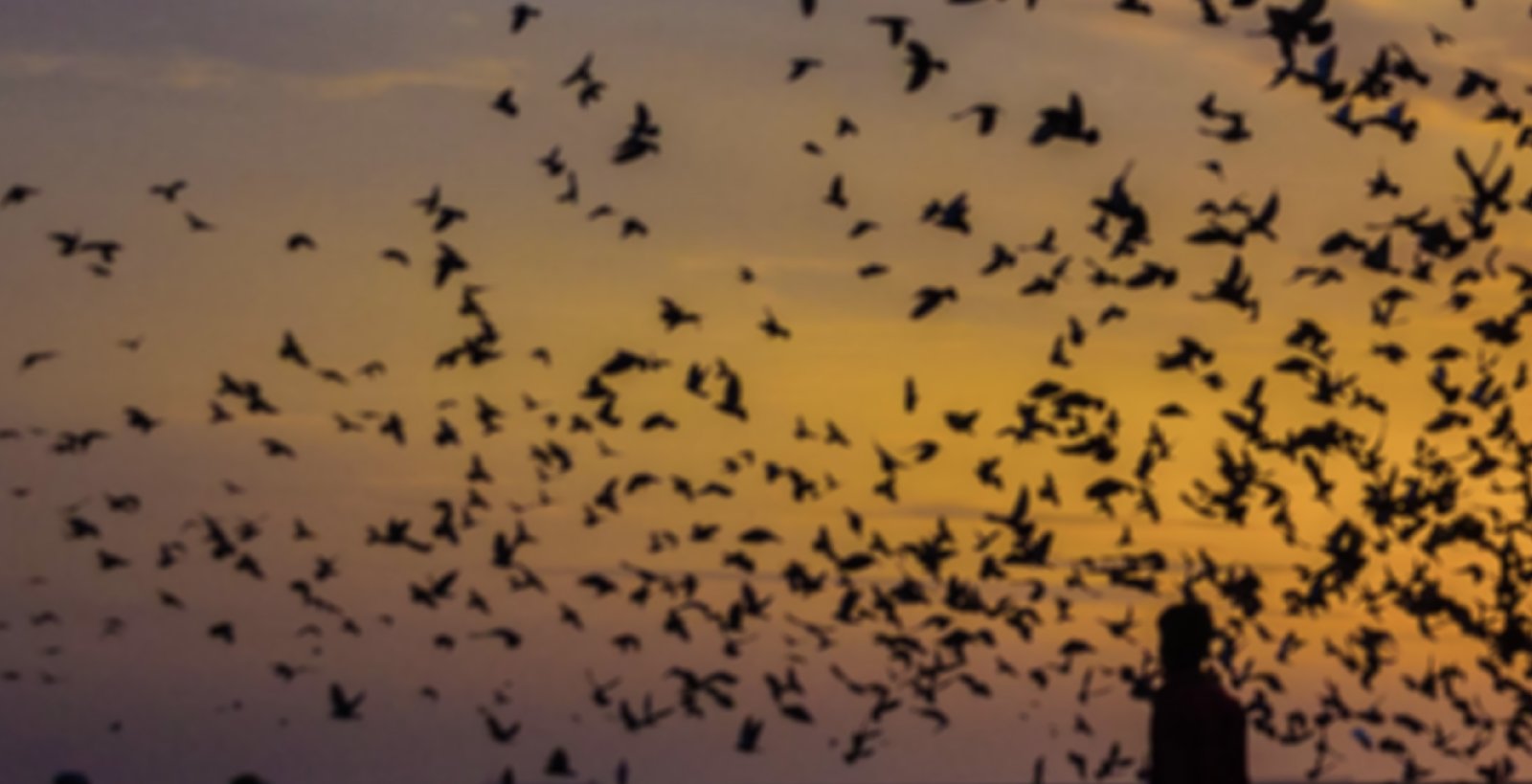 And yet they are all birds

Snake Plisken said:
I am behind him with a Video Camera (yes I captured this darker object too, it flashes over the train from this right hand edge goes off screen & then comes back into frame hugging that hillside back there heading back from where it came (this right hand side)
Click to expand...

where is this video?. It would probably help more than still shots with weird lines all over them when you zoom in.

I'd encourage you again to look at the photos of multiple birds. Zoom in, and see if there's not some shapes that resemble the type of things you are seeing in your photos. 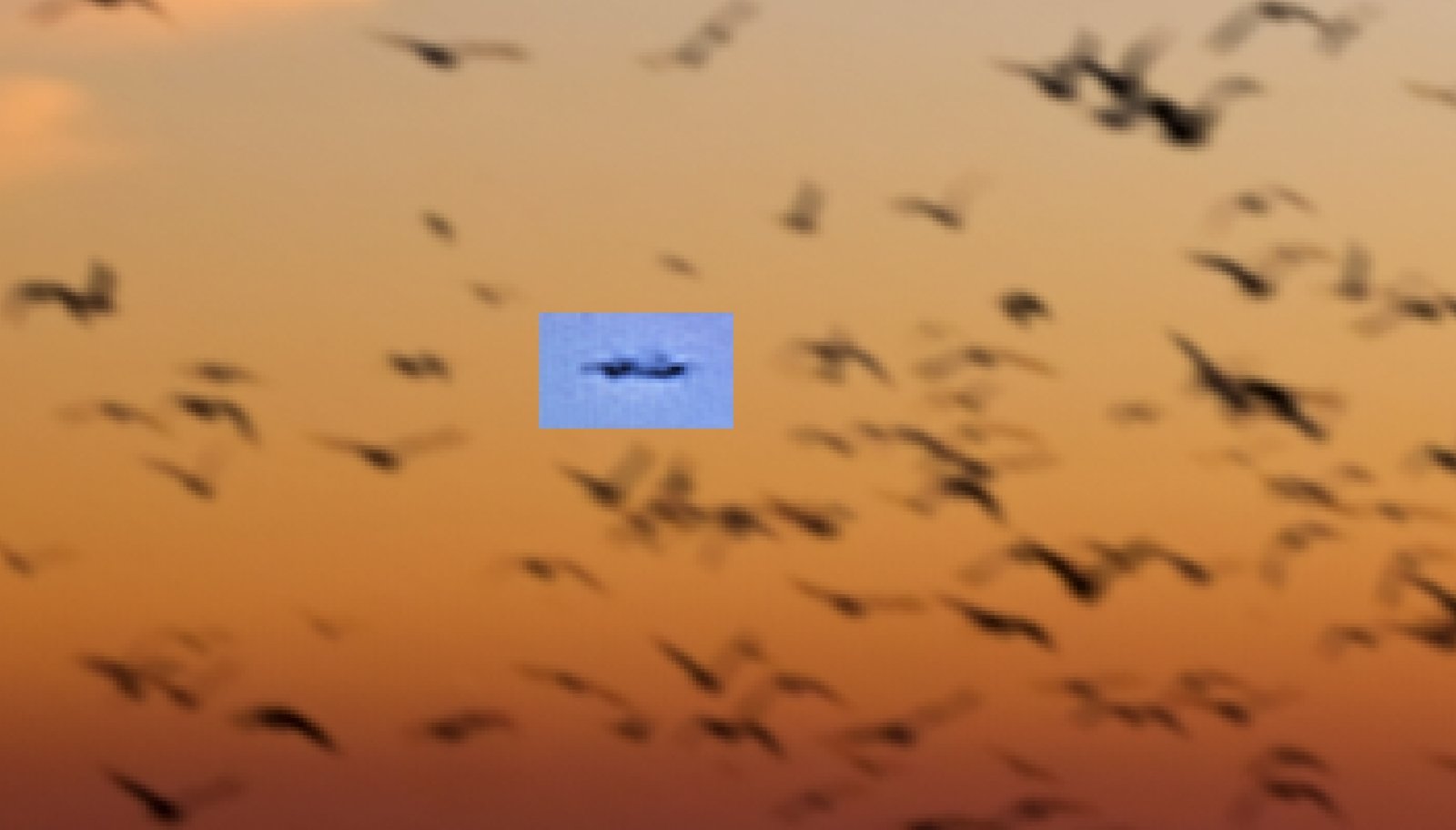 @Snake Plisten I see from your photo names that your camera can record. why not just upload the video to youtube so we can see it?

Also what date is this video? Not really important but I'm assuming you are looking at a VHS tape which is the only explanation I can think of regarding why you don't just share the video.
You must log in or register to reply here.