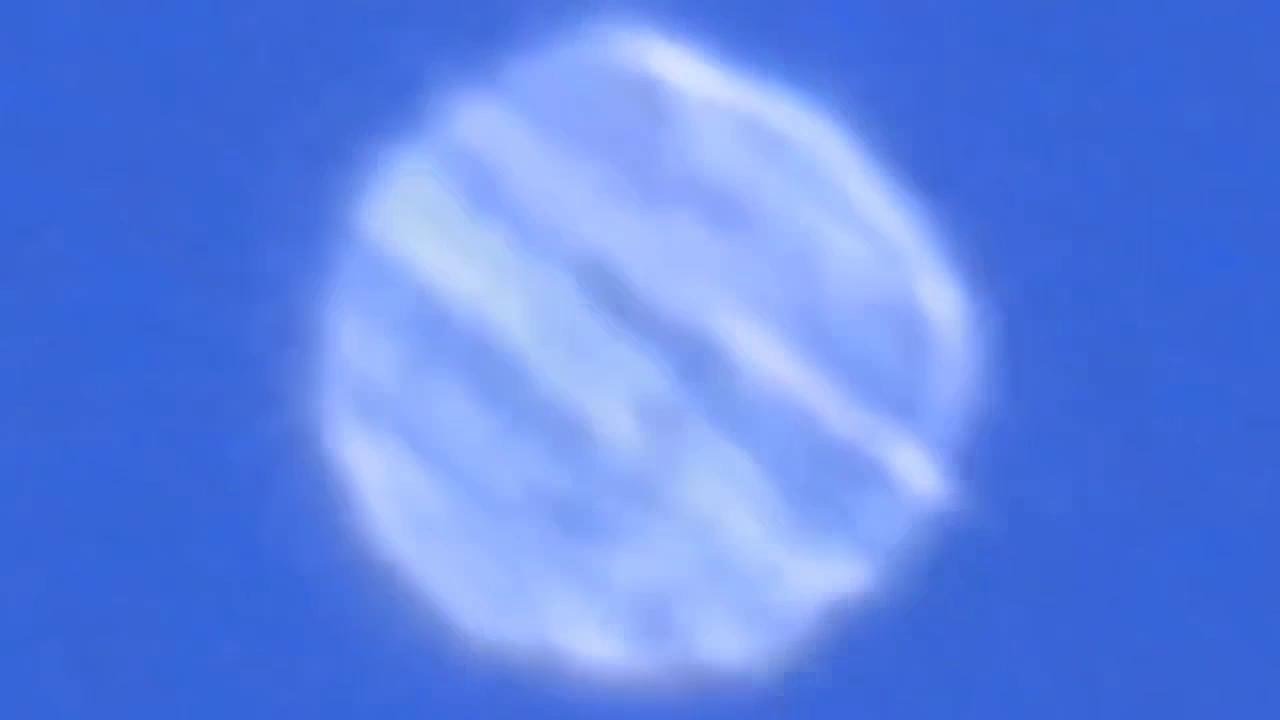 whats all this about ? I dont understand what they are proving with this picture, this is the only thing left for me, everything about being able to see bubbles in space in some footage and that all ISS footage is all purely all CGI and green screen is all twodle

whats all this about ? I dont understand what they are proving with this picture, this is the only thing left for me, everything about being able to see bubbles in space in some footage and that all ISS footage is all purely all CGI and green screen is all twodle
Click to expand...

Where is that from? Please provide a link to the original source.

Looks like a cropped and zoomed bit of lens flare or out of focus light source to me, but yeah, a source would be helpful. GIS gives me nothing but jellyfish.

Hevach said:
Looks like a cropped and zoomed bit of lens flare or out of focus light source to me, but yeah, a source would be helpful. GIS gives me nothing but jellyfish.
Click to expand...

It must be a jellyfhish in space then

But I agree, this really just looks like a lensflare or an out of focus light.
The picture reminds me of this thread:
Orbs: Something the metaJUNK shills just can't debunk.
Jonathan Evans, the Original picture would be much appreciated.

On a secound thought, I don't think its an out of focus light, regarding the structure of the "orb" it seems more like a lensflare caused by a reflection.
Last edited: Apr 21, 2016

Staff member
It's just out of focus scintillation. The "twinkling" of a star is due to ripples in the atmosphere. With planets you get similar rippling, though the twinkling is less visible to the naked eye (that's one way of telling the difference between a star and a planet in the night sky, planets don't twinkle).

The shape of the out-of-focus planet depends on the camera, the focus, and the exposure. This one appears hexagonal, which is a common shape. 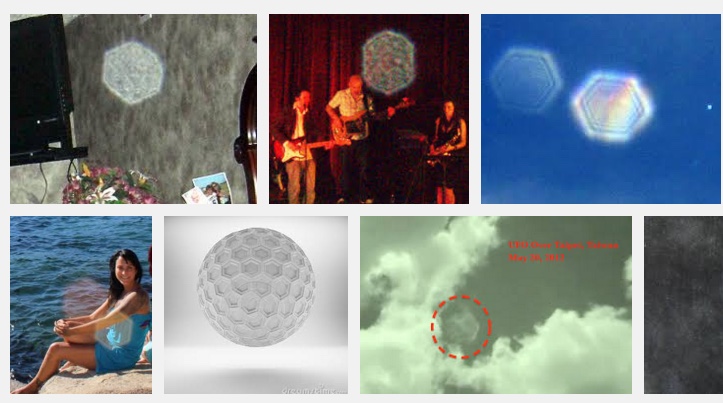 And another with a different shape

I've noticed that the video is taken through the window pane, there is an offset reflection in the glass that can be seen after the camera zoomed out and in again (from 6:12): 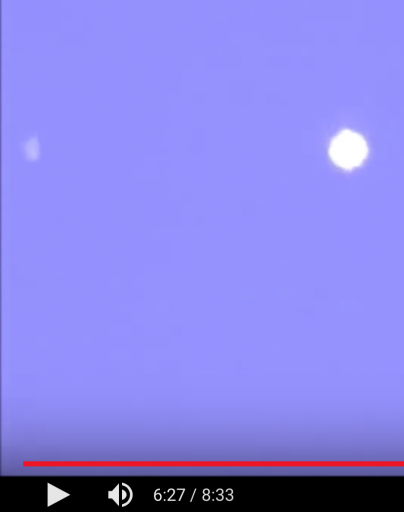 The reflection is dimmer and smaller than the 'direct' image that confirms this image being out of focus.

Mick West said:
The shape of the out-of-focus planet depends on the camera, the focus, and the exposure. This one appears hexagonal, which is a common shape.
Click to expand...

I beg to differ a little. Normally the shape is determined by the count and shape of the aperture blades and the aperture. exposure doesn't really count in.

edit: im not used to type on a tablet.

AND, even dirt on a single pane can do that.

Hofnarr said:
I beg to differ a little. Normally the shape is determined by the count and shape of the aperture blades and the aperture. exposure doesn't really count in.

edit: im not used to type on a tablet.
Click to expand...

Exposure comes into play when there's flare. It makes the edges of the shape much less distinct. Pure bokeh gives you a sharply defined geometric shape, but when things get too bright you get a much rougher shape.

Staff member
I just made this example showing Bokeh at different exposures by varying the ISO. Aperture and shutter speed are constant (f/11 1/60th). Note the darker version has more obvious edges and internal structure. The brighter images are larger, and with a fuzzy more rounded edge. 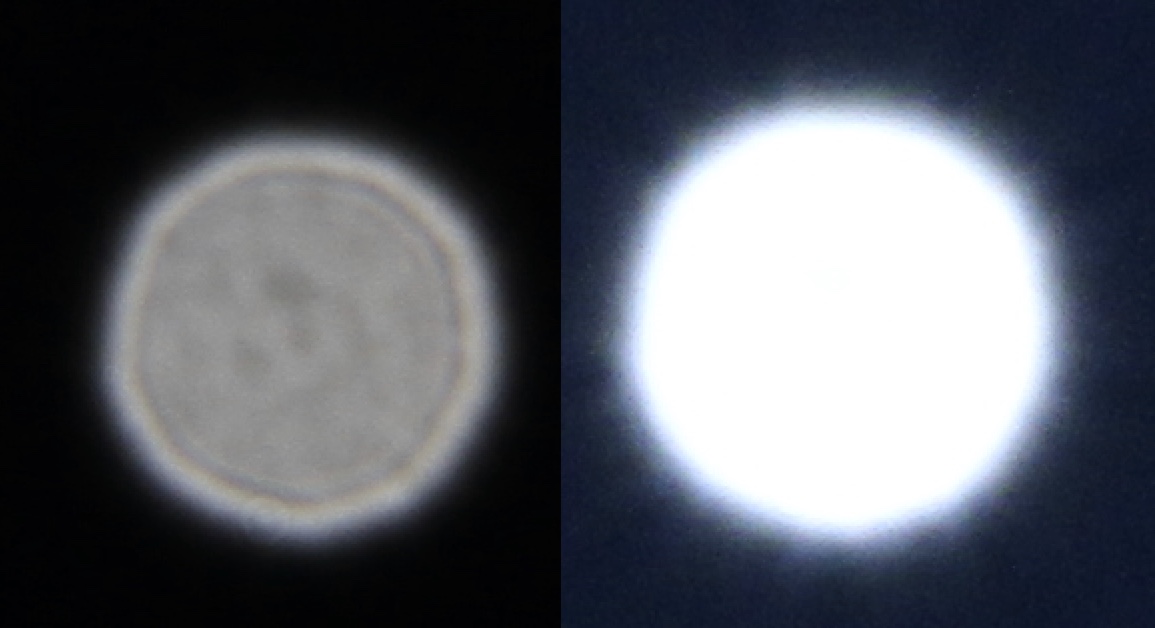 Here's how I simulated a "star" on a blue background. A hole in some cardboard with a light behind. 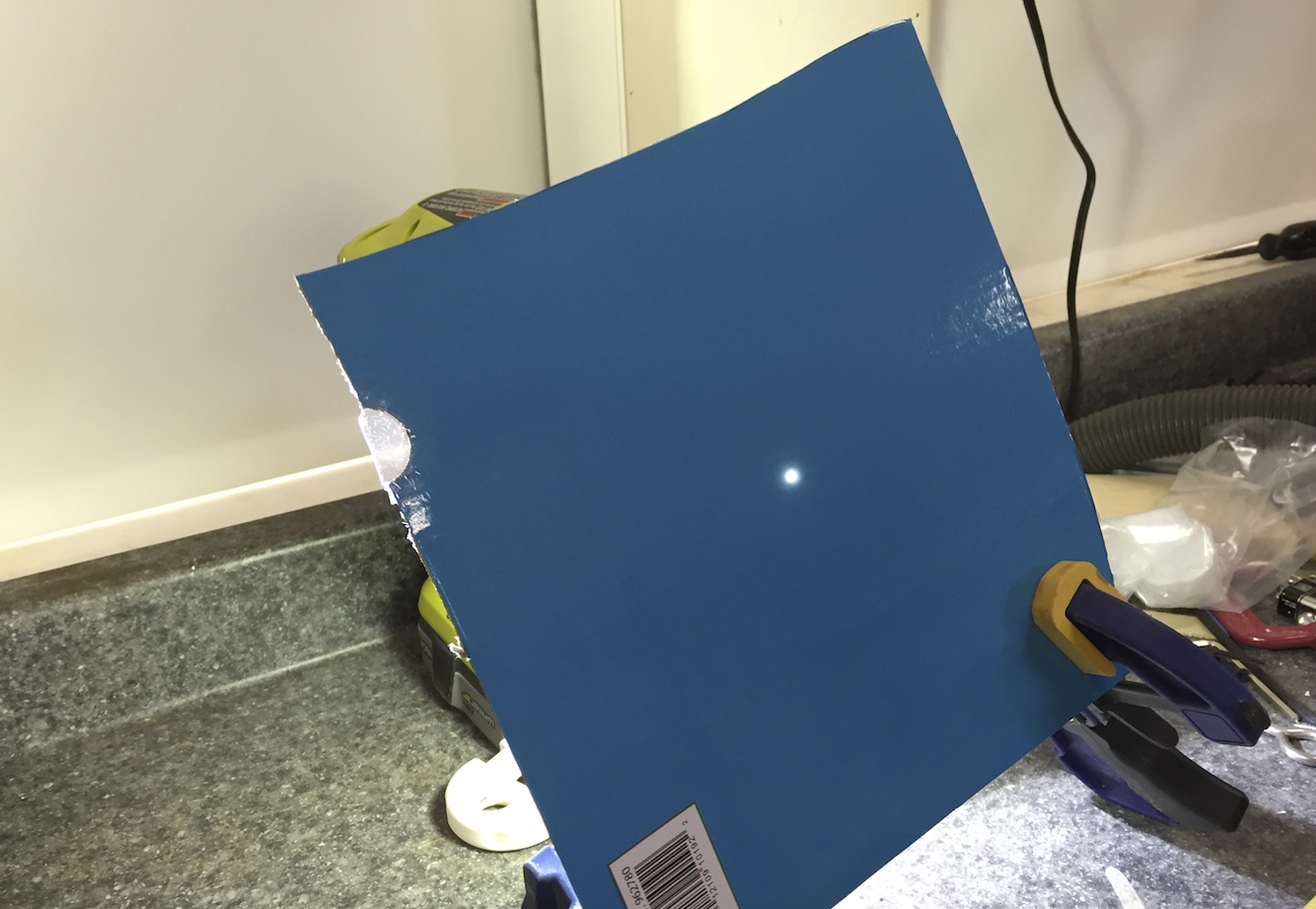 It looked to me like when you look at a star through a telescope, but don't have it focused.

Pretty cool Idea! I have to play around with this tomorow.
I did a quick overlay between your pics, 100 and 3200. 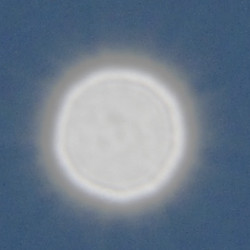 The Brighter "Circle" beeing at your ISO100.
As I agree, the higher the exposure the more fuzzy it gets, but both the flares are quite the same shape.

I recognize the image from the times I looked through my telescope and turned the eyepiece completely out of focus. You see what was basically a tiny very bright image smeared out over the view and optical parts of the telescope itself are gradually showing up. The twinkling occurs when there is a disturbance of the air in the line of sight, f.i. warm air rising in front of the camera or telescope. You would get the same effect with any other bright object.
I had to laugh in the beginning of the video, when he showed radar images of the Venus surface, wondering why you don't see those through your telescope and claiming them to be false.

Hofnarr said:
Pretty cool Idea! I have to play around with this tomorow.
I did a quick overlay between your pics, 100 and 3200.
Click to expand...


Hofnarr said:
As I agree, the higher the exposure the more fuzzy it gets, but both the flares are quite the same shape.
Click to expand...

Yeah, I probably should have said the appearance depends on those factors.

Another thing that can make a difference is anything that's very close to the lens, this could include a dirty window, or dirt on or in the lens itself. Drops of water on the lens can have an interesting effect

you guys are so awesome, I can now return to the world of the sane, and no longer worry about this "flat Earth" Rubbish, which is entirely based on Conspiracy in the first place.

I wonder how NASA simulated the artificial Venus to all astronomers in the past centuries, and to all the ancient civilizations who observed it even before that. Oh, I forgot, all the history must be an invention of the governments, too. But then, even my great-grand-father observed the planets well before NASA existed. Did the government invent my great-grand-father, too?

Jonathan Evans said:
which is entirely based on Conspiracy in the first place.
Click to expand...

It's based on conspiracy THEORY.

This is what is happening. A number of flat earthers are buying digital cameras with a powerful zoom lens (60x and up) and digital zoom (4x for example). They take videos of various stars and planets. The videos are very strange for these reasons:

-They are severely out of focus because they leave the camera in autofocus.

From Wikipedia: Contrast detection autofocus is achieved by measuring contrast within a sensor field, through the lens. The intensity difference between adjacent pixels of the sensor naturally increases with correct image focus. The optical system can thereby be adjusted until the maximum contrast is detected.

Autofocus will not work properly when pointed at a dark sky with only tiny pinpoints of light.

But even if they were to use manual focus and set the lens to infinity, there could still be a problem.

On film cameras of yore, lenses were carefully calibrated to distances. You could actually use a tape measure to focus the lens. Infinity meant infinity (on a quality lens anyway). On current digital cameras meant for amateur use, the makers assume the user will almost always use autofocus. The lens actually focuses somewhat "past" infinity - to give autofocus the ability to "hunt" for maximum contrast. If you simply crank the manual focus all the way out on many digital cameras, the image will be out of focus. You actually have to back off to get distant objects in focus.

- They use maximum digital zoom, which is nothing more than a form of cropping and results in a larger image with less definition.

- Scintillation. From Wikipedia: The twinkling of stars caused by the passing of light through different layers of a turbulent atmosphere. Most scintillation effects are caused by anomalous refraction caused by small-scale fluctuations in air density usually related to temperature gradients.

The result is a video of severely out of focus low definition images of stars and planets. Put this together with scintillation and you get these strange pulsating jellyfish. They then claim that this is proof that "Science" is lying to us about what stars and planets actually are and what they look like. Science presents us with pictures of sharp points of light, but when citizen scientists actually do their own investigation, they see that stars have dimension. The claim is that these "stars" and "planets" are actually small and nearby lights fixed on the firmament or dome.

Recently the speculation is that we are seeing these stars through water, and they compare the patterns they see in their star videos to objects seen from just below the rippling surface of water in a swimming pool. The conclusion is that "space is water."
Last edited: Apr 24, 2016

Looking at this particular video again, I realized something. I think that most of the scintillation is caused by the photographer's breath. Look particularly at 4:20 when he makes an exclamation. The image dances at exactly the same time. Human breath is warm and turbulent, causing random refractions of light.

The video I saw states that it was taken from inside, through a pane of window glass. Apparently, not telescope grade.
You must log in or register to reply here.

Related Articles
Claim: Only 6% of COVID deaths are "real" - the rest died due to comorbidities
Being seen from space - methods to demonstrate that sats are real and provide live video?
Are the Navy UFOs "Real," or just in the Low Information Zone?
How atmospheric tunelling and refraction really look like in real life.
A real-life 2D curvature analogy and a few thoughts regarding scale
How to test if Satellites are real
Claim Melania Trump has a double, will the real 1st lady please stand up
How to Prove Satellite Images are Real - Ground Truth
Debunked: Air Force Verifies Chemtrails are Real
Lake Balaton Laser experiment to determine the curvature of the Earth, if any.
Debunked: SpaceX Rocket Crash Landing Anomalies
Aircraft weight and balance in the real world
Fake photo with real looking EXIF Data
Erin Brokovich does not believe in chemtrails.
Ukraine has no real borders?
Latoya Ammons - A Real Life Demonic Possession?
Is any crisis real? Yes, even the mall attacks in Kenya were fake.
Fake on line journals with Real names
Gallbladder Flush Real or Fake
Real Life Wolverine?
Is the Saphonian bladeless wind turbine for real or a scam?
FB: Airline Pilots Who Believe that Chemtrails are Real
Real Names
If Chemtrails were real, they would affect the perpetrators
Real Photo?
Dnepropetrovsk Maniacs (Ukraine Serial Killers), Real? or Internet Hoax?
Chemtrails are Real
When is some concept Real, a Conspiracy or Fantasy?
Introducing The Real Charlie Veitch...
Solar Maximum Doom. Hype or real?
Obama kills Osama: What if real reporters were allowed White House press passes?
INDENIABLE PROOF chemtrails is real
Anyone care to apply REAL science to explain THIS? Part II
Anyone care to apply REAL science to explain THIS?
I think chemtrails are real breaking news
Video: Are Chemtrails Real?
Any real degree for Ilya Sandra Perlingieri?
David Icke: The moon is not real.
UFO Seen From Plane over Mexico March 19, 2020. Venus? (NARCAP TR 20)
Claim: Hints of life on Venus: Scientists detect phosphine molecules in high cloud decks
Mysterious drone swarms over Colorado and Nebraska - Chasing Venus?
The P900 Rippling Orb Effect & Taking Photos of Venus
Identified: UFO over Scotland, 2015. [Venus]
Debunked: Venus is abnormally bright
Zeitgeist (the film, Peter Joseph), Zeitgeist Movement, Venus Project
Share:
Facebook Twitter Reddit Pinterest Tumblr WhatsApp Email Share Link