The Other Side – Bashar al-Assad Interview with Izvestia 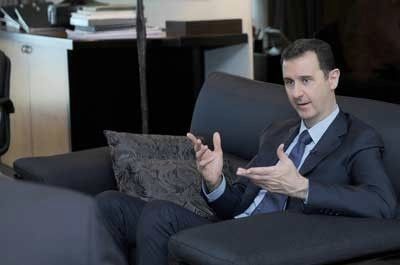 (Beforeitsnews:
I was so impressed with this interview I just had to post it. It is well worth the full read. Izvestia is a high-circulation daily newspaper in Russia. Assad is quite an impressive man who faces the biggest challenge of his nation's history, clearly showing himself much more the true statesman as opposed to the warlord vultures attempting to overthrow him. While everyone has their own propaganda machine and this is clearly carefully scripted as is most media today, nonetheless the points made and how they're framed is an eye-opener. It's no wonder the western press won't publish this interview. - Zen]
(P.S. I’m republishing the entire piece in case it gets “disappeared” off of the net.)

Izvestia: Mr President, the most pressing question today is the current situation in Syria. What parts of the country remain under the rebels’ control?

Bashar al-Assad: From our perspective, it’s not a matter of labelling areas as controlled by terrorists or by the government; we are not dealing with a conventional occupation to allow us to contextualise it in this manner. We are fighting terrorists infiltrating particular regions, towns or peripheral city areas. They wreak havoc, vandalise, destroy infrastructure and kill innocent civilians simply because they denounce them. The army mobilises into these areas with the security forces and law enforcement agencies to eradicate the terrorists, those who survive relocate to other areas. Therefore, the essence of our action is striking terrorism.

Our challenge, which has protracted the situation, is the influx of large amounts of terrorists from other countries – estimated in the tens of thousands at the very least. As long as they continue to receive financial and military aid, we will continue to strike them. I can confirm that there has not been any instance where the Syrian Army has planned to enter a particular location and has not succeeded in eliminating the terrorists within it.

The majority of those we are fighting are Takfiris, who adopt the al-Qaeda doctrine, in addition to a small number of outlaws, so as I said this not about who controls more areas of land. Wherever terrorism strikes, we shall strike back.

Izvestia: Yet, Western mainstream media claim that the terrorists control 40% to 70% of Syrian territory; what is the reality?

Bashar al-Assad: There isn’t an army in the world that can be present with its armament in every corner of any given country. The terrorists exploit this, and violate areas where the army is not present. They escape from one area to another, and we continue to eradicate them from these areas with great success. Therefore, I reiterate, the issue is not the size of the territories they infiltrate but the large influx of terrorists coming from abroad.

The more significant criterion to evaluate success is – has the Syrian Army been able to enter any area infiltrated by terrorists and defeat them? Most certainly the answer is yes; the army has always succeeded in this and continues to do so. However, this takes time because these types of wars do not end suddenly, they protract for prolonged periods and as such carry a heavy price. Even when we have eradicated all the terrorists, we will have paid a hefty price.

Izvestia: Mr President, you have spoken of Islamist Takfiri extremists’ fighters who have entered Syria. Are they fragmented groups who fight sporadically? Or do they belong to a coherent major force that seeks to destroy the security and stability in Syria and the whole Middle East?

Bashar al-Assad: They have both traits. They are similar in that they all share the same extremist Takfiri doctrine of certain individuals such as Zawahiri; they also have similar or identical financial backing and military support. They differ on the ground in that they are incoherent and scattered with each group adhering to a separate leader and pursuing different agendas. Of course it is well known that countries, such as Saudi Arabia, who hold the purse strings can shape and manipulate them to suit their own interests.

Ideologically, these countries mobilise them through direct or indirect means as extremist tools. If they declare that Muslims must pursue Jihad in Syria, thousands of fighters will respond. Financially, those who finance and arm such groups can instruct them to carry out acts of terrorism and spread anarchy. The influence over them is synergised when a country such as Saudi Arabia directs them through both the Wahhabi ideology and their financial means.

Izvestia: The Syrian government claims a strong link between Israel and the terrorists. How can you explain this? It is commonly perceived that the extremist Islamists loathe Israel and become hysterical upon hearing its name.

Bashar al-Assad: If this was the case, why is it then that when we strike the terrorists at the frontier, Israel strikes at our forces to alleviate the pressure off of them? Why, when we blockade them into an area does Israel let them through their barricades so they can come round and re-attack from another direction? Why has Israel carried out direct strikes against the Syrian Army on more than one occasion in recent months? So clearly this perception is inaccurate. It is Israel who has publically declared its cooperation with these terrorists and treated them in Israeli hospitals.

If these terrorist groups were indeed hostile to Israel and hysterical even on the mention of the word as you mention, why have they fought the Soviet Union, Syria and Egypt, whilst never carrying out a single strike against Israel? Who originally created these terrorist groups? These groups were initially created in the early 80’s by the United States and the West, with Saudi funding, to fight the Soviet Union in Afghanistan. So logically speaking, how could such groups manufactured by the US and the West ever strike Israel!...more---

As we have seen in photos, John Kerry had no trouble sitting down to dinner with this man whom he now labels another Hitler. Why is the only place to read Assad's side of the story published in a Russian newspaper? And why is he being demonized the way he is now, while just recently treated with all manner of diplomacy? Both sides of any story are required before big decisions like going to war, aren't they? 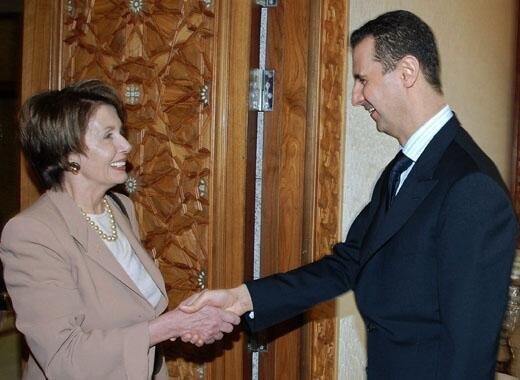 xenon said:
... Why is the only place to read Assad's side of the story published in a Russian newspaper? And why is he being demonized the way he is now, while just recently treated with all manner of diplomacy? Both sides of any story are required before big decisions like going to war, aren't they?

Russia's interest in this case and their possible spin should be questioned as well as America's. I think they are taking advantage of the situation which to their minds is more about 'what can we do to oppose American interests?', and the media would not publish anything that wasn't implicitly okay with Putin's goals.
Needless to say Putin would support crushing of dissent, as Assad is doing.

Still a good question as to why the turn-around in diplomactic support. Maybe America and Russia were both trying to woo him, then he succumbed to Russia's charms and America feels jilted and vengeful.

xenon said:
As we have seen in photos, John Kerry had no trouble sitting down to dinner with this man whom he now labels another Hitler.
Click to expand...

Let's not pretend the US and Syria were great friends prior to or during Kerry's visits. (A decent timeline of events appears in this BBC article -- please note the developments from 2000 onward.)

Sen. John Kerry, chairman of the Foreign Relations Committee, will visit Syria next week for talks with President Bashar al-Assad, the latest move by the Obama administration to improve relations with this Middle East nation.

Former President George W. Bush imposed unilateral sanctions on Syria in 2004 — primarily as punishment for Damascus' support of the Islamic militant movements Hamas and Hezbollah — which he then extended during his last year in office.

Washington's ambassador to Syria was withdrawn following the 2005 assassination of Rafiq al-Hariri, the former Lebanese prime minister. Damascus has denied accusations that it was involved in the killing.

The U.S.-led invasion of Iraq, with which Syria shares a border, also created a deepening rift, with the Bush administration accusing Syria of allowing foreign fighters to cross into Iraq.

"Senator Kerry, like the rest of U.S. delegates arriving in Damascus, is so welcome," Foreign Ministry spokeswoman Bushra Kanafani told CBS News on Thursday. "We have always called for deep dialogue with Washington to put our relations on the right track, which would serve bilateral interests, security and stability."

"We are hoping that through such visits a new phase will start between the two countries," she added.

Kerry spokesman Frederick Jones confirmed the visit Wednesday and said the senator would be part of a congressional delegation stopping in both Israel and Syria, as "part of a continuing dialogue he's had with the Syrian government."

Content from external source
The Bush administration had little interest in pursuing diplomatic talks with Syria. That changed under the Obama administration.


xenon said:
And why is he being demonized the way he is now, while just recently treated with all manner of diplomacy?
Click to expand...

It's not that simple. Neither international diplomacy nor foreign policy are static. New events or developments frequently alter the course of foreign relations. The current situation is rather aggravated by an ongoing civil war with a six-digit death toll and enormous refugee crisis.

You'd do better to focus on the sequences of events which led up to the present dilemma. Pictures of smiling faces and handshakes don't provide you with the necessary background to put everything into proper perspective.

well said Cosmic- people decry military intervention and appeal for diplomacy- when typically diplomacy as been going on (either up front or through back channels) all along...In Diplomacy the goal is to sit down with your adversary.

On the surface, Diplomacy is all about handshakes and smiles...which seems ironic that those photos then got trotted out as evidence of collusion or hypocrisy.

Related Articles
Explained: Photo of 747 with Contrails Only on One Side [Fake, April Fool]
Debunked: Fake photos-Novichok attack Russian 'agents' (side by side gates)
WTC7 South Side Photos
A Side View of the Curvature of the Earth at Lake Pontchartrain
Could Girder A2001 Possibly Have got Past the Side Plate on Column 79?
A Sunlit Contrail Viewed From the Side
People Blaming Bad Weather on Side Effects of Technology Through History
Red and Blue Side-by-Side Contrails, Midlands, UK
Two Contrails, One Gap. How side-by-side contrails can differ
Debunked: Acupuncture for Relief of Cancer Medication Side Effects
FOX News Interviews Syrian President Assad
US 'backed plan to launch chemical weapon attack on Syria, blame it on Assad govt'
Share:
Facebook Twitter Reddit Pinterest Tumblr WhatsApp Email Share Link