The Global Cross-Hair Enigma that looks like Hair Dryer Burns 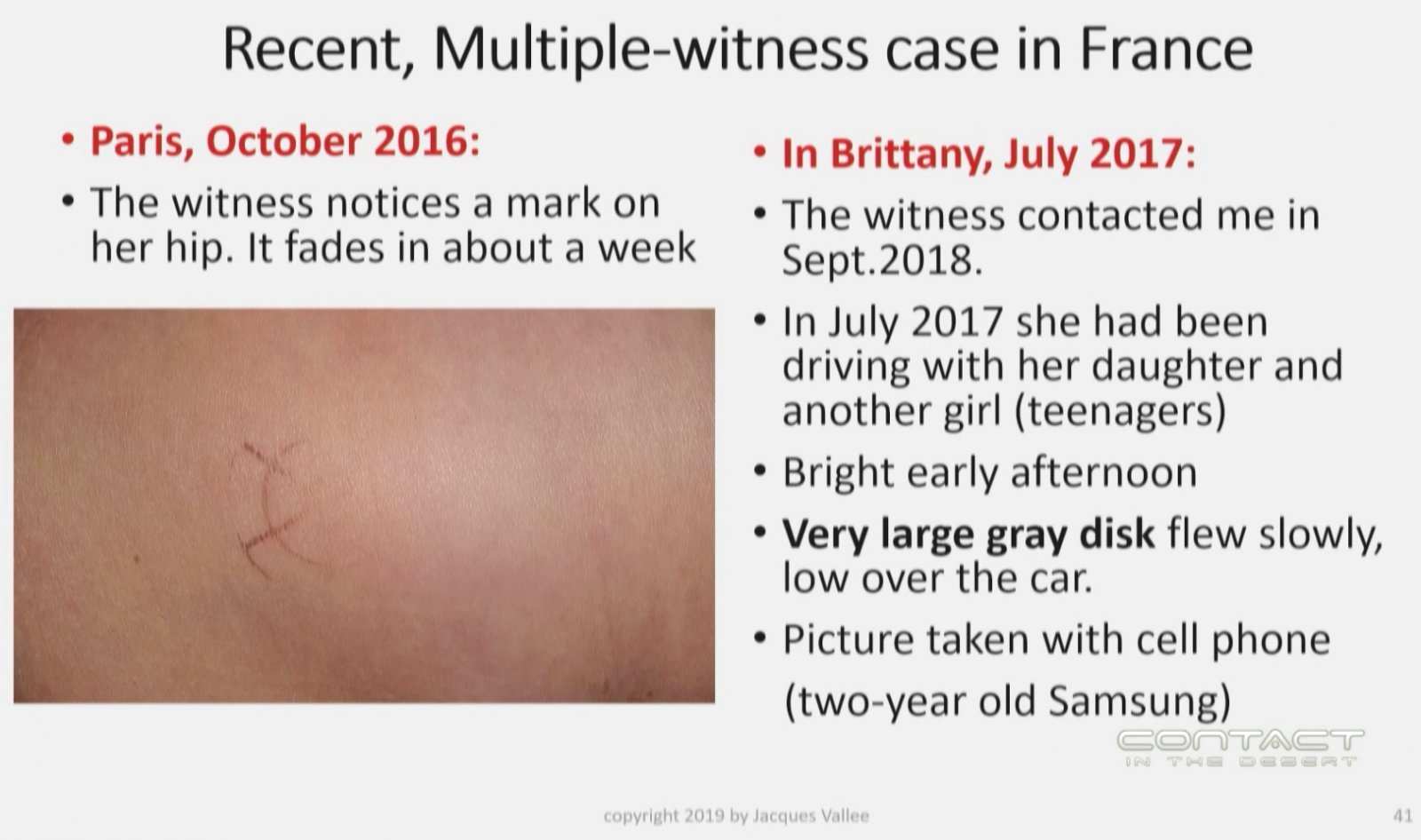 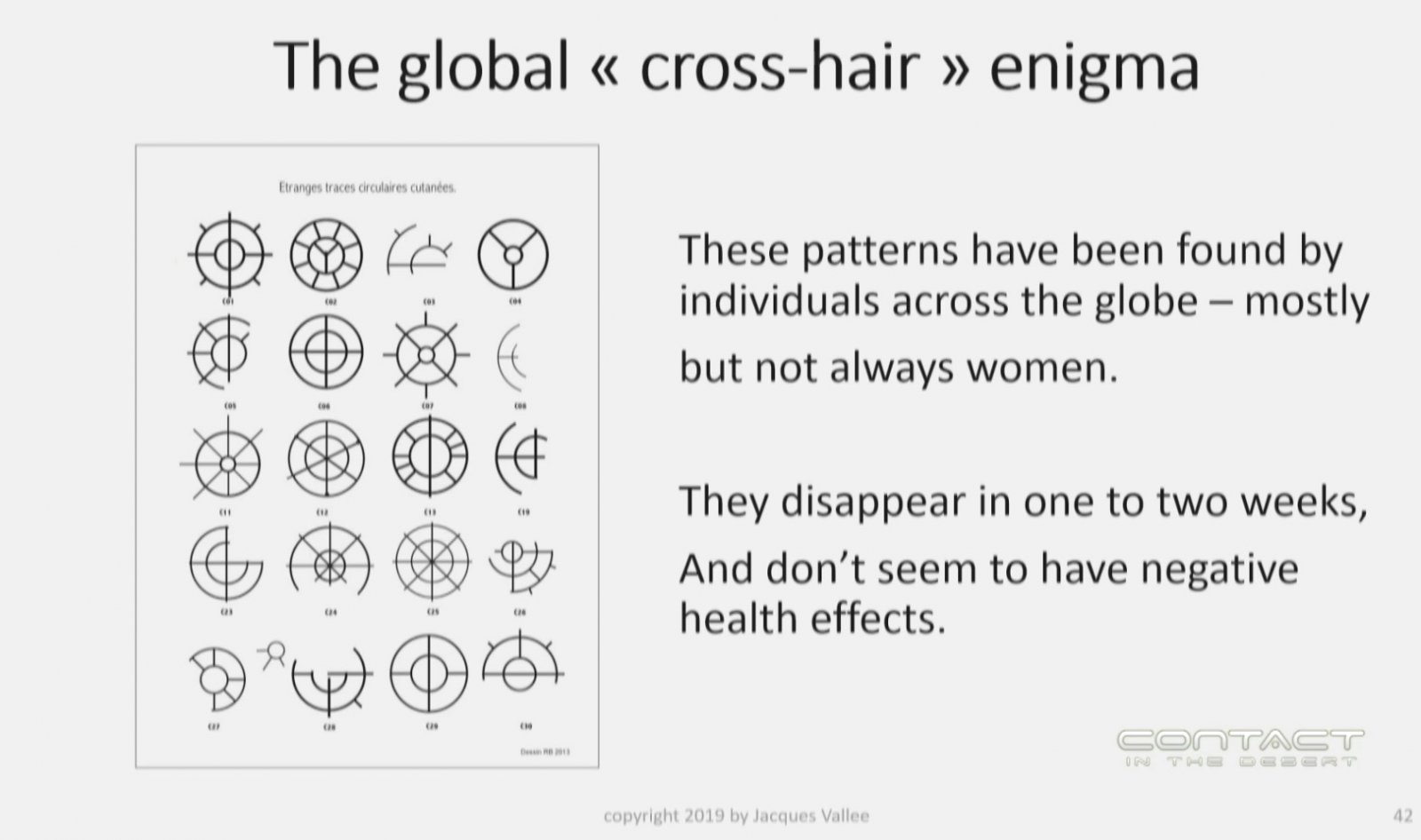 The above two slides are from a talk by famous UFO investigator Jacques Vallee. The talk came up because scientist Garry Nolan (who sometimes works with Vallee) mentioned a later aspect of the case (a star-shaped mark on a photo and a giant UFO nobody noticed) in a recent interview with Tucker Carlson.

But someone in the comments pointed out the likely cause in April 2022:

The Paisley Wave 4 months ago
With all respect for Dr. Vallee, the 'crosshair' marks may have a simple explanation. Search for images of blowdryers and you'll see many, especially the older ones, have metal crosshair-shaped grills at their openings. They get hot and can burn the skin leaving marks corresponding with their shape, a crosshair. Note that most of these appear on women, who are more likely to use blow dryers.

And indeed, there is a strong resemblance:

Vallee discussed this hypothesis in the video, but, for reasons that are not clear, he dismissed it.


Of course, we know, we've tried to look at that and say, What kind of symbol is it? Well, the first thing we thought about is, if you look at our hairdryer, you know, you turn the hairdryer towards you. And you look at the end of the hairdryer, it looks like this. Okay, so we thought maybe, you know, this, this woman, I mean, women use hairdryer more than we guys do. So maybe she burned herself with their hairdryer. Well, if you try to do that, you're going to get burned, alright. But it's not going to look like this. Okay, you will have a burn. And so, so it's not that. Although in some cases, the dimensions are pretty much the same as the ones on the grid in the front of your hairdryer. But it's not always the same pattern. As you could see the pattern changes. Then you look at, you know, ancient literature and symbol books of symbols, and so on. And there is a pattern that looks exactly like that. Three, concentric circles, and radio lines. And that's a pattern of Atlantis.

As well as the dimensions matching, all of the various shapes are shaped of hairdryer grills: 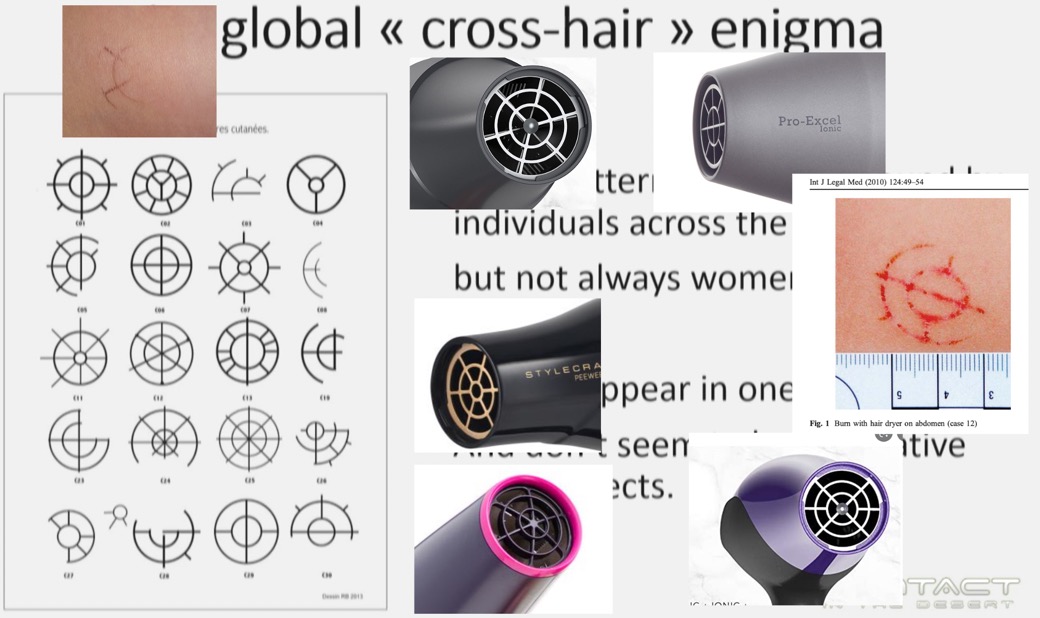 The partial marks could obviously come from a hairdryer at an angle (as seen in the medical journal image).

So his dismissal of hairdryers (and the subsequent leap into Atlantean symbology) makes no sense. Hairdryer is by far the most likely explanation.

UPDATE: The hairdryer owned by the individual in Vallee's case matches her burn:
Click to expand...

@Mick West Thought I'd re-post this to Mick directly as it's relevant to the topic and references the same talk given by Vallee about the marks. In that talk Vallee also makes the following claim about a woman who he was able to bring to a "dermatological research department" when her mark showed up a second time:

Timestamp link to that part of his presentation:
Source: https://youtu.be/PeSe0BDtPMA?t=320


It would be great if Mick could contact Jacques to inquire specifically about this case as it seems to challenge the notion that all marks are attributable to hair dryer burns.

DLoVe said:
It would be great if Mick could contact Jacques to inquire specifically about this case as it seems to challenge the notion that all marks are attributable to hair dryer burns.
Click to expand...

I did. He thinks that one might not be from a hairdryer. But there's not a lot you can do with it now.

These hair dryer cases are not the first time that apparently self-inflicted "UFO burns" have been reported.

"I recall a photo being shown [on the April 1, 1982, edition of ABC-TV's That's Incredible] of Betty's arms, with discrete, round, sunburn-type rashes that immediately caused me to suspect that she had created them by covering her arms with a garment containing circular cutouts and then exposing herself to sunlight (or a sunlamp)."


Stephan Michalak in Canada claims to have suffered burns, in a grid-like pattern, after a UFO experience.

Robert Sheaffer said:
These hair dryer cases are not the first time that apparently self-inflicted "UFO burns" have been reported.

"I recall a photo being shown [on the April 1, 1982, edition of ABC-TV's That's Incredible] of Betty's arms, with discrete, round, sunburn-type rashes that immediately caused me to suspect that she had created them by covering her arms with a garment containing circular cutouts and then exposing herself to sunlight (or a sunlamp)."

There is no way that such discrete, round patterns could be produced by radiation from a distant object.

Robert Sheaffer said:
Stephan Michalak in Canada claims to have suffered burns, in a grid-like pattern, after a UFO experience.

The upshot of this whole thing is that as he stepped back from viewing this thing, it was very hot and very bright. The thing tilted, started swinging around in a counter-clockwise direction, bringing some vent holes or what appeared to be vent holes in front of him. These hit him in the chest, knocked him down, and this thing took off. To shorten the story somewhat, he eventually became very ill. He started nauseating, he started seeing spots, he lost everything in his stomach. Eventually, over the next few weeks, he lost a great deal of weight. His lymphocyte count went down drastically, almost lethal.

All of the signs were either of a cancerous kind of thing or of radiation burning. He was taken to Pinawa, it's a local establishment. No radiation whatsoever. Eventually, this thing calmed down and he went back to work. About nine months later, he collapsed at work. When they rushed him into the hospital, there was a series of dots on his chest. These proceeded to come back every three months for about 14 months, about a year and a half, there about, let's say.

As it turns out, the radiation at the scene was a little higher than normal, unusual. Dad's blood cells and lymphocyte counts were a little off, yes, that's true, that's a fact, but there wasn't enough radiation to close the entire Whiteshell Provincial Park or form any kind of a public safety issue.

P.S. Metabunk's link policy requires posting a quote alongside the link. The policies are linked under "Info" in the nav bar.
You must log in or register to reply here.