The Angle Cut at Ground Zero: Clean up or evidence ofa CD?

This is my first post so I don't know if this the correct procedure. I've looked through many of the threads but I can't seem to find where the following is addressed. If there is a thread, I apologise for wasting time.

Anyway, I often 'debunk' 9/11 canards on various sites, often at an amateur level, but this one surfaced recently and I'm at a loss to explain it sufficiently.

A follower of 9/11 truth believes the following pic is a 'smoking gun' for a controlled demolition: 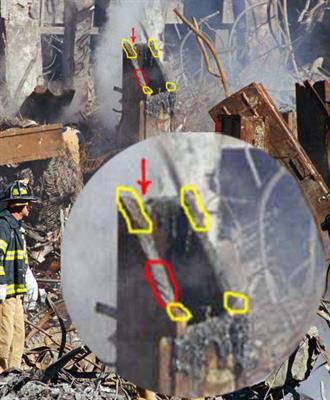 The individual claims that the areas circled in yellow were left uncut in order to 'prep' and facilitate the execution of the collapse.

The columns were supposedly pre-cut to weaken them for when the explosives were deployed.

Are these areas uncut and fractured. Does anyone know about the provenance of the pic? I once read it was the product of a thermic lance, but I can't confirm that notion.

Staff member
All the evidence seems to point to it being cut with a thermic lance during cleanup. It's a column at the base of the building, so there's nothing to be gained from weakening it for a top-down collapse. 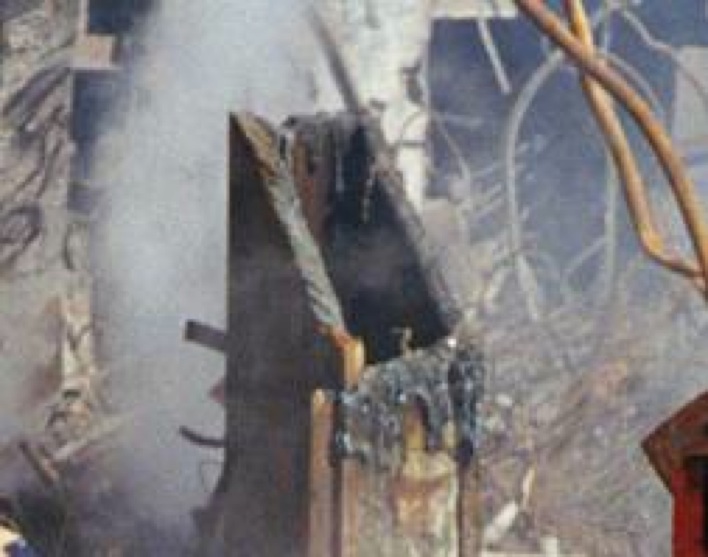 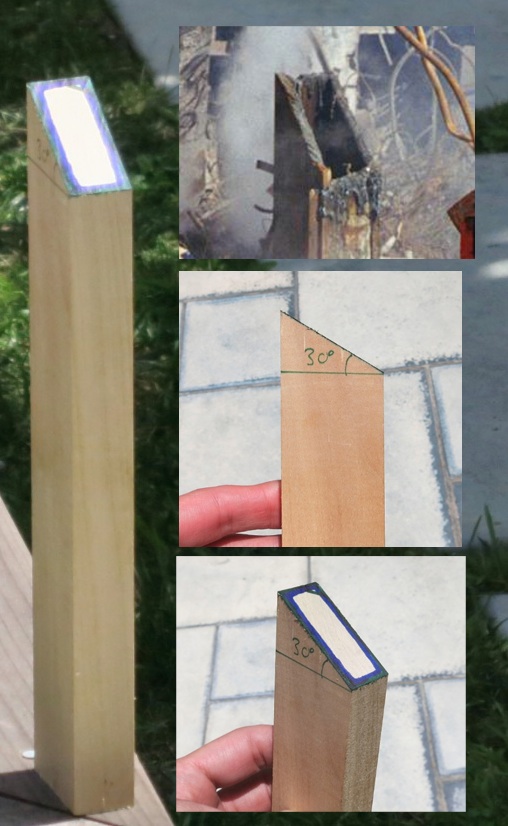 Thank you for your response. I feel stupid as I overlooked that simple point.

Feel free to delete this thread if you so desire, Mick, and thanks for the clarification despite the fact that it was obvious.

As econ41 might point out, I missed the forest because of the trees.

Welcome to the board @Blues63
A

Another point is that the sintered material which you see dripping down the edges of the column which is far more brittle than the column it came from. Had these cuts been made before the building fell it would be highly unlikely they would remain attached to their source. The balance of probability alone suggests that they were created after the fall.

Thanks for the welcome. I've been lurking for a little while now, and I often bookmark resources on the subject.

Predictably, my opponent responded with the usual invectives while offering some specious response that I'll interpret when I've translated it.

one recently was "how come the Antarctic Sea Ice sheets are growing" on the face of it, it seems a powerful counter argument to the Global Warming narrative

well one factor is warmer air generally means more precipitation which means more snow - so perfectly consistent with Climate science, and makes sense even to me

That is more true for land ice though, even though the Antarctic suffers net loss in land ice. Sea ice behaves differently, and the increase is mostly due to melted (fresh) water causing stratification near the sea surface level, causing the surface to become cooler than the warming deeper layers. I also read that it has something to do the way ice is being filled in into cracks between ice floes as land ice is pushed into the ocean.

Which would also be a factor in an ice sheet increase. Unlike the Arctic sheets, the Antarctic ones are fed by land ice. When land ice starts to melt, it moves faster lubricated by water, potentially feeding more ice into the sea. It's a larger scale version of what's been seen with many alpine glaciers - before receding, many had a period of several years where they seemed to be getting larger because they were flowing faster. After a period, the source depletion and melt catches up and the glacier recedes, but in reality the loss of mass had already begun during the lengthening.

Another way to tackle the question of angled cuts:
AE911Truth has a public dropbox with all sorts of material (full DVDs, PR material, letters...):
https://www.dropbox.com/sh/o3hrpfopzp5qm6r/khO8FQjY-Z
(I am posting the root folder, for all you curious noses out there )

Go to the FEMA PICS AEFF folder, it has high resolution originals (often with EXIF-data, which I like, although the camera's clock seems to be off by a number of hours) of photos FEMA took on ground zero between September 12 and October 27. Lots and lots of steel members, but nowhere do I see an angled cut.

I don't know when and where the photos with the cuts were snapped, but I'd guess that must have been later in the clean-up process, increasing the likelihood that they were made by the clean-up workers.

Yes Cube Radio, I actually used this video in my early counter arguments but it received the usual hand wave dismissal. I will view the videos supplied, thanks.

Thank you, Oystein, I will bookmark that source.

Blues63 said:
A follower of 9/11 truth believes the following pic is a 'smoking gun' for a controlled demolition:

Gage still uses this photo in his presentations of truth. I like Oystein's idea of finding earlier photos of the same column to prove to even the most diehard ae911truther that the column was not cut until the demolition. Can anyone see where this is?

However you don't need to do so to convince most normal people. Thermite would need to be contained to cut a column. It turns to a superhot liquid and melts the steel. This is an internal core column 30x16in, so the column scales has a wall thickness of 3in plate.

So even if someone removed the containment device which ae911truther suggest then there would not be drip surfaces on every surface. Its not possible. Can any truther try and explain how these columns could be cut by thermite and leave a surface like this. Its preposterous.!
You must log in or register to reply here.