Starman and the Falcon Heavy

FatEarther said:
Not exactly. The sun doesn't 'heat up and evaporate' the water, the zero air pressure causes the water to violently boil off into a gas. The gas then instantly freezes into chrystals, which is called Desublimation:

Definition: Desublimation is the phase change from gas to solid.

So... does water Freeze or Boil in space?

But when you put liquid water in space — where it can no longer remain as a liquid — which one of these two things happens? Does it freeze or boil?

The surprising answer is it does both: first it boils and then it freezes! We know this because this is what used to happen when astronauts felt the call of nature while in space. According to the astronauts who’ve seen it for themselves:

When the astronauts take a leak while on a mission and expel the result into space, it boils violently. The vapor then passes immediately into the solid state (a process known as desublimation), and you end up with a cloud of very fine crystals of frozen urine.

There’s a compelling physical reason for this: the high specific heat of water. 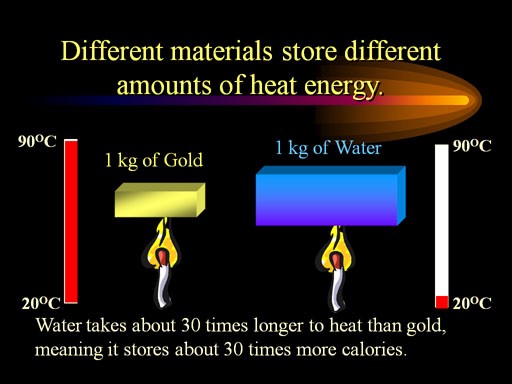 Image credit: ChemistryLand, via http://www.chemistryland.com/CHM151S/06-Thermochemistry/Energy/EnergyUnitSpecificHeat.html.
It’s incredibly difficult to change the temperature of water rapidly, because even though the temperature gradient is huge between the water and interstellar space, water holds heat incredibly well. Furthermore, because of surface tension, water tends to remain in spherical shapes in space (as you saw above), which actually minimize the amount of surface area it has to exchange heat with its subzero environment. So the freezing process would be incredibly slow, unless there were some way to expose every water molecule individually to the vacuum of space itself.

But there’s no such constraint on the pressure; it’s effectively zero outside of the water, and so the boiling can take place immediately, plunging the water into its gaseous (water vapor) phase!

Ah, I see my mistake. Thank's for this, this is extremely informative

FatEarther said:
Not exactly. The sun doesn't 'heat up and evaporate' the water, the zero air pressure causes the water to violently boil off into a gas. The gas then instantly freezes into chrystals, which is called Desublimation:
Click to expand...

The phase diagram for water shows if it wants to be a solid, liquid, or gas for any combination of temperature and pressure. Water starts at one point (say 37°C, 1 bar) for body temperature water at one atmosphere pressure (when it's liquid). Then it goes to essentially zero pressure, and a very low equilibrium temperature (when it's solid)

To get from from one point to another it has to follow a line. You can see it either goes from liquid to solid, or liquid to vapor to solid, depending on what decreases most rapidly, temperature or pressure. 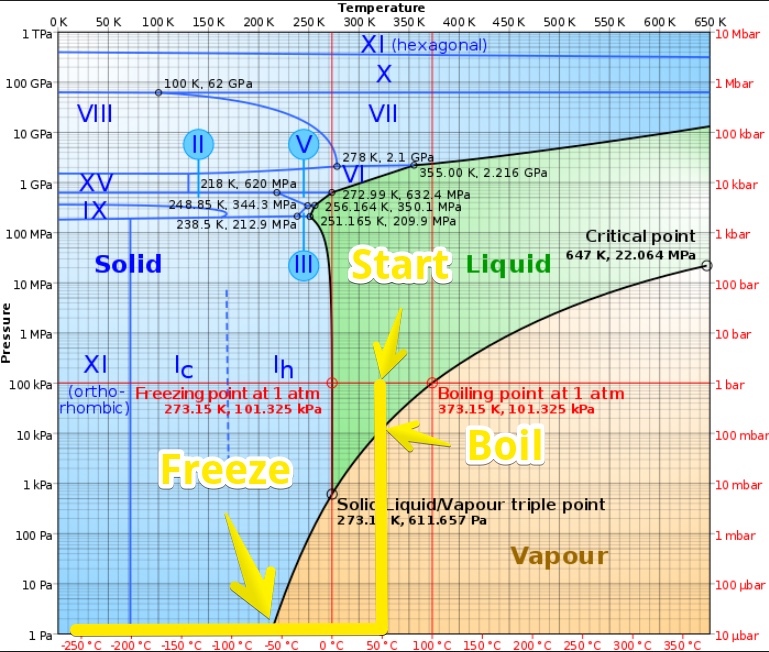 StarGazer said:
Youtuber Astronomy Live spotted Starman using 0.7 meter telescope on iTelescope.net. According to his calculations, the distance to Starman on the image was about 1.8 times the distance to the Moon.

Hey sweet, that's me! I actually over-killed it by going with the 0.7 meter, but I wanted to maximize my chances of detecting it. Yesterday I shot it again with a 0.5 meter scope at the same site when it was over 5 LD away from earth according to the orbit calculations, which included my data from the video as well as observations from other observatories.
https://projectpluto.com/temp/spacex.htm#eph
It's at about magnitude 19 right now, which is still within the reach of larger amateur telescopes like this. Unfortunately today it's cloudy at Siding Spring, but here's a short two image gif from yesterday:
http://h.dropcanvas.com/la9rq/tesla21318.gif
Get your last shots in now while the getting's good. It won't be coming this close to earth anytime in at least the next 40 years (as far as JPL has projected out so far).

*Edit to add, there are some important bits of evidence in the orbital elements that validate its identity as the SpaceX second stage, regardless of all the hoax claims. The perigee date and time indicates it was closest to earth at about 9:35 pm eastern time on the 6th of February (2:35 AM on February 7th by universal time which is close to terrestrial time or TT), about 6 hours after the Tesla was launched, right when the final burn to eject it from earth orbit was supposed to be occurring.

Secondly, the geocentric inclination is about 28 degrees, which just happens to be the latitude of Florida where it launched from. That's not a coincidence though; they launched it from Florida with a heading of about 90 degrees due east, so it should have had an inclination roughly equal to the latitude of the launch site. There may have been a very slight off-plane component in one or more of the burns so it's not exactly centered on LC-39A, but it's significantly less than a degree from that site.

Lastly, the perigee distance is less than 1000 km from the surface, which would be extraordinarily unusual for a natural object. Combined with the other factors it's clear this was an artificial object launched from earth, and its inclination and departure time perfectly match the SpaceX Falcon Heavy launch.
Last edited: Feb 14, 2018

One more update, I tracked it again today. It's faint but it's still detectable to the 0.7 meter scope at Siding Spring.
http://h.dropcanvas.com/9plen/tesla21618.gif
With this I hope to have enough of my own data to nail down the orbit precisely enough to get very close to the official orbit published by NASA. I plan to use that to trace it back to its departure burn precisely enough to match it up with an Orbiter simulation of the launch and departure and show in a webcast that it's a perfect match for the position and timing of the Second Stage/Tesla. I've been getting a ton of negative comments on youtube from people who don't seem to understand that it's possible to identify it because "it's just a dot." While I can't necessarily expect most people to understand orbital mechanics, I hope to do a webcast this weekend educating them on the fact that it's a perfect match for the trajectory of the second stage and matches the position of the second stage burn witnessed by multiple people as it departed earth orbit around 9:30 eastern time on the day of the launch.

So I traced back the orbit I calculated for the second stage, and sure enough, it matches right up to the MMT All-Sky Camera video of the second stage finishing its final trans-Mars ejection burn.
Source: https://www.youtube.com/watch?v=IVQdSGQajj0

Sorry to bump this fairly old thread, but I recently "debunked" another picture from Starman on Reddit. I made happily use of the commonly known lens flare debunking techniques. Below you see the original picture of a "strange shape", and after it an image with the optical reflection construction around the centre of the frame.
The fun thing is, after a few times you start to recognise this easily in images claimed to be ETs flying through. Sometimes images are deliberately cropped to get rid of the light source, complicating proving the reflection. 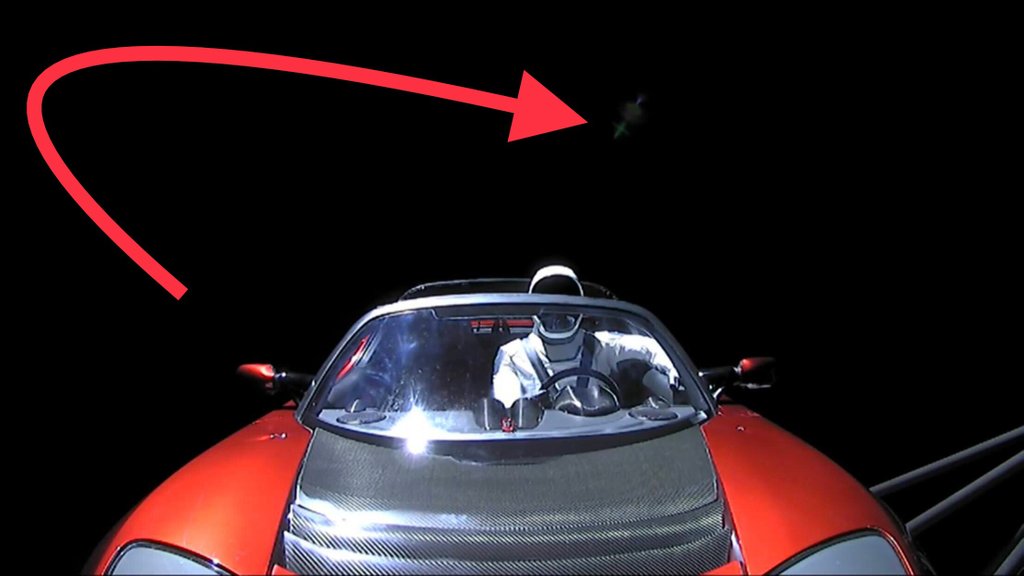 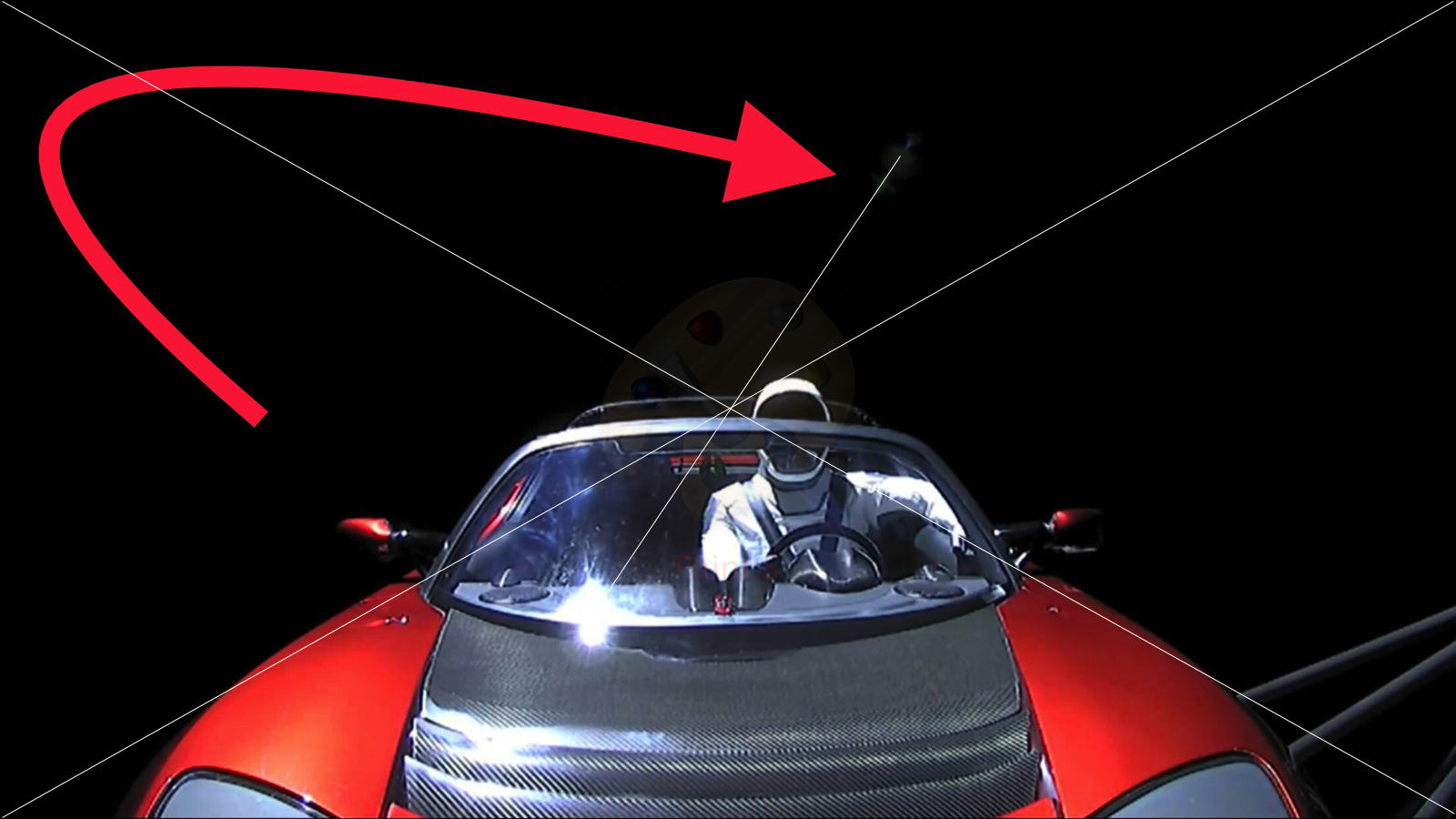 Super, SUPER late here but was reading through this thread and just had to sign up to comment given that nobody had fully addressed the "debris" floating around in view of the cameras.

Though the camera angles are chosen carefully to avoid reminding the viewer of the fact too often, the car remained mounted to the top of Stage 2. (Obvious if you think about it, as it still had one burn to go at this point.) So it was also still in close proximity to the engine.

The Falcon 9/Heavy second stage uses cryogenic oxygen as oxidizer, and it is constantly warming and boiling off in the heat of the sun. Hence, small amounts of the oxygen are constantly being vented to space. The vent or vents are at the base of stage 2 right next to the engine nozzle. If you watch any Falcon 9 or Falcon Heavy launch with any kind of attention, you will see the occasional bit of fluffy oxygen ice building up down there, and occasionally breaking off as it's pushed away by the pressure of more oxygen building up behind it.

Obviously it doesn't break off with a whole lot of excess velocity, so it stays near the stage and/or payload for a while. When the stage has put itself into a roll, as is the case in this particular launch, it might seem to be rotating around the vehicle for a while; when an RCS thruster fires with a bit of the ice in view, it might seem to jerk off quickly to one side or another as the stage turns.

And, there's more. The RCS thrusters themselves use compressed nitrogen gas. It's non-cryogenic, but it can also produce ice debris. You can see this most predictably immediately prior to a re-light of the second stage engine. (Which means more so in a normal mission, where they just keep the cameras running the whole time, than one like this.) The RCS is used like old-timey ullage motors, to settle the propellants. The nitrogen ice produced by them comes out less fluffy and bulky than the chunks of oxygen ice do. More like a cloud of sparkly debris. And of course as soon as the second-stage engine fires, it's all quickly left behind. But there's no reason that RCS use during a coast wouldn't do the same thing.

Finally, I think it possible that even water ice may be a contributor at times. Water ice builds up on the rocket while it's on the pad, and most likely is largely long gone by the time the rocket leaves the atmosphere behind, but I think it's possible some might stick around for a while in the odd crevice, only to be released later on when enough of it sublimates.

So basically, there is no need to suppose the car itself is contributing to debris that looks like ice. It probably IS ice.