Solar geoengineering and the chemtrails conspiracy on social media

A new paper with the above title has been published in the journal "Palgrave Communications" by Dustin Tingley and Gernot Wagner.
https://www.nature.com/articles/s41599-017-0014-3

Discourse on social media of solar geoengineering has been rapidly increasing over the past decade, in line with increased attention by the scientific community and low but increasing awareness among the general public. The topic has also found increased attention online. But unlike scientific discourse, a majority of online discussion focuses on the so-called chemtrails conspiracy theory, the widely debunked idea that airplanes are spraying a toxic mix of chemicals through contrails, with supposed goals ranging from weather to mind control. This paper presents the results of a nationally representative 1000-subject poll part of the 36,000-subject 2016 Cooperative Congressional Election Study (CCES), and an analysis of the universe of social media mentions of geoengineering. The former shows ~ 10% of Americans declaring the chemtrails conspiracy as “completely” and a further ~ 20–30% as “somewhat” true, with no apparent difference by party affiliation or strength of partisanship. Conspiratorial views have accounted for ~ 60% of geoengineering discourse on social media over the past decade. Of that, Twitter has accounted for >90%, compared to ~ 75% of total geoengineering mentions. Further affinity analysis reveals a broad online community of conspiracy. Anonymity of social media appears to help its spread, so does the general ease of spreading unverified or outright false information. Online behavior has important real-world reverberations, with implications for climate science communication and policy.

Chemtrails are not real. Belief in the chemtrails conspiracy is. Between ~ 30 and ~ 40% of the general US public appear to subscribe to versions of the conspiracy theory, numbers only topped by the large fraction (~ 60%) of social media discourse, more on Twitter, focused on the topic. That renders rational conversations around solar geoengineering and its potential role in climate policy even more difficult than it would be absent the chemtrails conspiracy (Burns et al., 2016). It also shows some of the broader implications of this online community of conspiracy with implications well beyond climate policy.

Much like ‘anti-vaxxers’ are hardly persuaded by evidence against their theory, chemtrails conspirators, too, are apparent masters in picking ‘evidence’ to support their views, while ignoring evidence against them. Regardless of possible unintended consequences, fighting tweets with peer-reviewed analyses does not work. Much more promising are attempts to engage at the same level, speaking to chemtrails conspirators directly using social media platforms (e.g. West, 2014).

The reference goes to the Metabunk thread on my "70 years of books on clouds" video, which they probably picked up from the Guardian article, reference #7.

Staff member
The poll is rather disheartening: 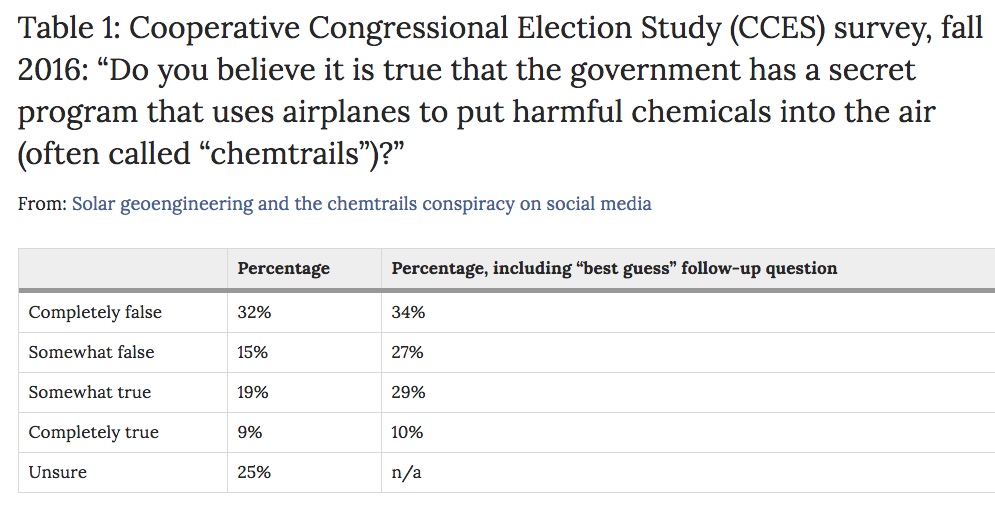 A 2013 poll, with different wording in the question got much lower numbers:

It's hard to say how much of the difference is due to the question (or maybe other survey-related factors), and if there's actually been a significant shift.

The study made it into my Facebook feed via LifeHacker reporting on the story covered in Earther.com , and as expected the chemtrail folks have been quick to chime in and assert [that is means the chemtrail theory is true] followed by an expression of outrage and a pledge to unfollow LifeHacker

Chemtrails are not real, but that hasn’t stopped an increasing number of Americans from thinking they are.

Research by Harvard scientists published in Palgrave Communications on Tuesday shows that a shocking number of people believe the [...] theory that the government is secretly spraying chemicals in the sky to control the weather or our minds or whatever.

Last edited by a moderator: Nov 3, 2017
You must log in or register to reply here.