Appropriately enough, it looks as though H5480 may be "rising from the dead", but repurposed from a chemtrail-based bill to one that actually addresses real geoengineering proposals.

Wil Burns, co-executive director of the Forum for Climate Engineering Assessment, has redrafted the bill, as H7578, to make it more scientifically rigorous.


This bill was originally introduced into the Rhode Island House of Representatives by Representatives Karen MacBeth (D) and Justin Price (R) in 2015. It appears that the original impetus for the bill was Representative Price’s embrace of the so-called “chemtrail conspiracy,” the purported plot by the government and/or corporations to use aircraft to spray chemical or biological agents into the atmosphere for various purposes. The bill failed to clear out of the House Environment and Natural Resources Committee in 2015. It was “held for further study” in its 2016 incarnation in the same committee.

In early 2016, Representative MacBeth approached me to review the bill, and we agreed that I would engage in a re-draft. I emphasized that I did not believe in chemtrails, and that the bill should focus on responsible oversight of potential research into climate geoengineering that might transpire in Rhode Island. Because the sponsors’ primary concern appeared to be the risks posed by solar radiation management, we also agreed that this would be the cynosure of the bill’s re-drafted language. As is true with most legislation, compromises had to be made. There is language in the bill that I consider a bit overblown in terms of its characterization of climate geoengineering research, but this is the nature of politics. In the end, I felt that the bill provided some salutary mechanisms to both ensure scientific and public oversight.

I had two purposes: Firstly, I was hoping to help draft legislation that would serve as a model for discussion of what national legislation or international governance might look like in terms of regulating geoengineering research and potential deployment. This obviously won’t be the ultimate province of sub-national actors; however, state legislation often provides a model for national legislation and regulations. Some of the elements included in the bill, such as thresholds for regulatory interventions in terms of research, and environmental impact assessment, are elements that should be included in national or international governance approaches. The contours of these elements is certainly subject to further debate, but it was my hope that this bill would provide a foundation for said debates.

Secondly, I thought that a “live” bill would help to stimulate discussion among both policymakers and the public about climate geoengineering in a way that hasn’t happened to date, with geoengineering largely residing in the theoretical realm for most people. I subscribe to the theory of “anticipatory governance,” meaning that it’s critical to engage stakeholders early in the process of the discussion of potentially momentous decisions.

Ultimately, the primary people testifying about the bill were those who equate climate geoengineering with “chemtrails.” As a consequence, I think the bill wasn’t really given serious consideration by the Rhode Island House Environment and Natural Resources Committee. It is anticipated that the bill will be re-introduced in the future. Hopefully, members of the geoengineering community will weigh into the process.

Trailblazer said:
it looks as though H5480 may be "rising from the dead", but repurposed from a chemtrail-based bill to one that actually addresses real geoengineering proposals.
Click to expand...

That's would seem like an ideal outcome for most aspects of the chemtrail conspiracy. There has certainly been some occasional movement in that direction, like with Jim Lee, sort of.

Geoengineering is something that might be done in the future. It's important that the public are informed about the topic (and about anthropogenic climate change in general) so that political decisions can be (oh so very slightly) more science based rather than ideology, fear, and popularism based.

Mick West said:
That's would seem like an ideal outcome for most aspects of the chemtrail conspiracy.
Click to expand...

Unfortunately, if the bill passes, I suspect that the chemtrail believers will ignore the fact that most of their language has been stripped out of it, and seize on the (revised) bill as proof that they were right all along.

Trailblazer said:
Unfortunately, if the bill passes, I suspect that the chemtrail believers will ignore the fact that most of their language has been stripped out of it, and seize on the (revised) bill as proof that they were right all along.
Click to expand... 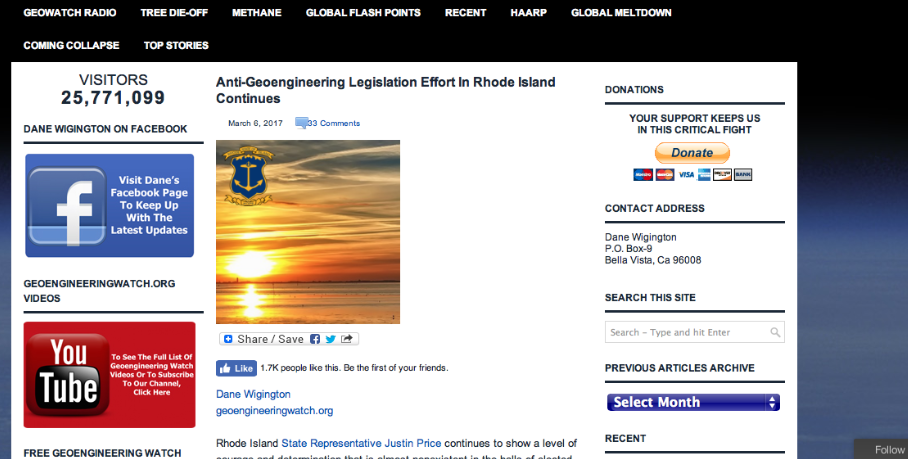 
Rhode Island State Representative Justin Price continues to show a level of courage and determination that is almost nonexistent in the halls of elected government officials at any level. In February of 2016 Geoengineering Watch published a report detailing the ongoing efforts by Rhode Island legislators to bring exposure and accountability to the critical issue of global geoengineering/climate engineering programs which are decimating the biosphere and the entire web of life. GeoengineeringWatch.org supplied climate engineering informational materials and educational DVDs to the legislators and committee members. A compelling short video testimony from the 2016 Rhode Island Legislation hearing is below.

Much of the language in the earlier draft of the bill is gone. The new bill seems much more tentative [my emphasis]


It is enacted by the General Assembly as follows:

SECTION 1. The general assembly finds and declares as follows:

(1) Solar radiation management and climate geoengineering research is in an extremely
early stage, but if unrestricted and unregulated, could have an economic impact on the state by potentially allowing increased amounts of air contaminants and air pollution throughout all areas of the state.

(3) Geoengineering could have a negative impact on the state by upsetting the complex natural balance in nature, because scientists do not fully understand the vast interconnections between various species and their environments which make life habitable on earth.

But it still says geoengineering is a crime, and you must pay $5 million and get jailed for 15 years for every day you are geoengineering in Rhode Island!
Last edited: Mar 6, 2017

skephu said:
But it still says geoengineering is a crime, and you must pay $5 million and get jailed for 15 years for every day you are geoengineering in Rhode Island!
Click to expand...

In some ways it might be a good thing if the bill passes. When contrails continue it just might get the message through that contrails are not geoengineering.

Trailblazer said:
In some ways it might be a good thing if the bill passes. When contrails continue it just might get the message through that contrails are not geoengineering.
Click to expand...

Especially if they take it to court and have to provide evidence.

Title
The Geoengineering Act Of 2017

Rhode Island legislation has passed a resolution to set up a 5-member commission to work out regulations for geoengineering by next April.
https://legiscan.com/RI/rollcall/H6011/id/676749

Bill Title: House Resolution Creating A Special Legislative Commission To Study The Establishment Of Procedures To Regulate And License The Intentional Manipulation Of The Global Environment Through Geoengineering (creates A 5 Member Commission To Study And Provide Recommendations On The Regulation And Licensure Of Geoenginerring, And Who Would Report Back By April 2, 2018, And Expire On June 2, 2018.)

(a) Process. Any person seeking to implement, conduct, or engage in any form of 25 geoengineering within or above any area of the state shall first submit to the director of the 26 department of environmental management an application for a license to engage in a specific type 27 of geoengineering.

Do they have a lot of glaciers in Rhode Island? http://webserver.rilin.state.ri.us/BillText17/HouseText17/H6011.pdf

Maybe they're just hoping it will act as a sort of template for world-wide legislation of geoengineering activities.

Title
The Geoengineering Act Of 2017

But very different from the previous version. This one was apparently co-authored by Rosalind Peterson (RIP). I think Jolie Diane DePauw has also had a hand in this.


In response, the Geoengineering Act of 2017 H6011 was co-authored by Rosalind Peterson http://www.agriculturedefensecoalition.org and Susan Clarke, introduced by Representative Justin Price in Rhode Island State. Its a national and international legislative initiative to end the programs that use technology to artificially manipulate the Earth’s natural systems such as spraying atmospheric aerosols and controlling weather with electromagnetics. Here is the text of that bill

http://inothernewsradio.com/podcast/in-other-news-january-8-2017/
You must log in or register to reply here.

Eruption of Kilauea Volcano in Hawaii – Conspiracies and Science