I Raymond A. Wood being of sound mind and body wish to confess the following:

I was a black New York City undercover police officer from April 1964 through May of 1971. I participated in actions that in hindsight were deplorable and detrimental to the advancement of my own black people. My actions on behalf of the New York City Police Department (BOSSI) were done under duress and fear that if I did not follow the orders of my handlers I could face detrimental consequences. Presently, I am aging with failing health; recently I have learned of the death of Mr. Thomas Johnson and are deeply concerned that with my death his family will not be able exonerate him after being wrongly convicted in the killing of Malcolm X.

The Facts are as follows:

April 17, 1964. I was hired by the New York City police department. Without training I was immediately assigned to the BOSSI investigation unit

My job was to infiltrate civil rights organizations throughout New York City, to find evidence of criminal activity, so the FBI could discredit and arrest its leaders.

After witnessing repeated brutality at the hands of my coworkers (Police), I tried to resign, Instead I was threatened with arrest by pinning marijuana and alcohol trafficking charges on me if I did not follow through with the assignments.

Under the direction of my handlers I was told to encourage leaders and members of civil rights groups to commit felonious acts.

The Statue of liberty bombing idea was created by my supervisor/handler. Using surveillance the agency learned that Bowe and Sayyed were key players in Malcom X's crowd control security detail. It was my assignment to draw the two men into a felonious federal crime, so that they could be arrested by the FBI and kept away from managing Malcolm X's Audubon Ballroom door security on February 21, 1965. On February 16, 1965 The Statue of Liberty plot was carried out and the men were arrested just days before the assassination of Malcolm. At that time I was not aware that Malcolm X was the target.

On February 21, 1965 I was ordered to be at the Audubon Ballroom, where I was identified by witnesses while leaving the scene. Thomas Johnson was later arrested and wrongfully convicted to protect my cover and the secrets of the FBI and NYPD.

I have placed my full confession into the care of my cousin Reginald Wood Jr. I have requested that this information be held until after I have passed away.

It is my hope, that this information is received with the understanding that I have carried these secrets with a heavy heart and remorsefully regret my participation in this matter.


Content from external source
The above letter (written in 2011) was released a few days ago by the family of Malcolm X. It was claimed on Twitter that this was proof that "the FBI assassinated Malcom X". But it's really not that explicit, and much of the content, while being new to many people, is things that were known. It is unfortunately light on details.

Consider "Under the direction of my handlers I was told to encourage leaders and members of civil rights groups to commit felonious acts." Wood goes on to describe a type of sting operation that the FBI still carries out today. An undercover operative infiltrates a group that seems dangerous and encourages them to commit a crime like a bombing. They even go as far as supplying fake explosives. Then when the plot has progressed right up to the moment of enactment, they swoop in, arrest everyone, and declare they have foiled a deadly attack.

Wood was involved in such an operation, and his involvement was reported in the press before the assassination. The arrests were made Feb 16 1963, and were reported in the evening papers that day. 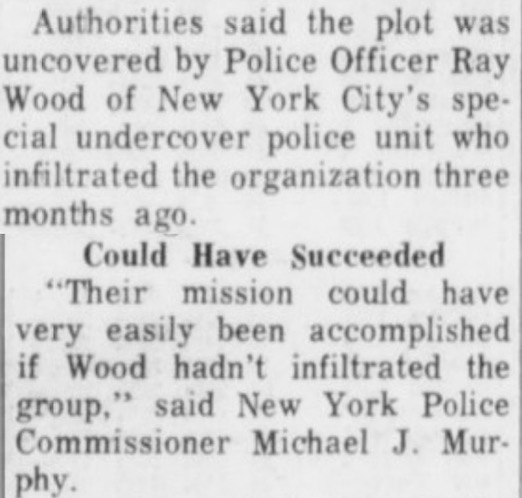 What's new is the accusation that the men were arrested so they would be "kept away from managing Malcolm X's Audubon Ballroom door security on February 21, 1965", and Wood's claim that "On February 21, 1965 I was ordered to be at the Audubon Ballroom, where I was identified by witnesses while leaving the scene. Thomas Johnson was later arrested and wrongfully convicted to protect my cover and the secrets of the FBI and NYPD."

This last part seems a little odd, as his cover was already blown by being reported in the newspaper. After three months undercover, he would surely have been known by sight to many people other than those arrested. He also does not state what he was doing there, however, Thomas 15X Johnson was identified at the scene as a gunman. So if "Thomas Johnson was later arrested and wrongfully convicted to protect" Wood's cover, then that would imply that Wood himself was a gunman - which seems like it should have been the main point to clarify here.

It's also odd that a three-month sting operation would be set up just to remove two members of Malcolm X's door security detail five days before the regular weekly OAAU meeting at the Audubon. That would give plenty of time to arrange replacements or reschedule. Wood specifically says that this was his assignment.

FBI and police involvement is certainly not out of the question, but this letter is really not clear evidence of what the involvement was.

Staff member
A lot of related background around Raymond Wood's involvement can be found in this 2005 article:
https://www.theguardian.com/us-news/2015/feb/21/malcolm-x-assassination-records-nypd-investigation


Campbell is an educator and civil rights activist who founded the Liberation School along with OAAU member Herman Ferguson in 1964. His papers include handwritten notes taken by the late Japanese American activist Yuri Kochiyama. The meeting, the notes explain, was held “to establish stability from this crisis.” And the notes contain an unexpected piece of information. Kochiyama’s scrawl at the bottom of the 6 March meeting reads:

"‘Ray Woods is said to have been seen also running out of Audubon; was one of two picked up by police. Was the second person running out.’"

The notes appear to substantiate the accounts of Herman Ferguson and the AP of a “second man” taken into police custody. That a name should resurface 50 years later is remarkable. But more significant is that the “Ray Woods” named in the note was likely Raymond A Wood, an undercover New York City police officer with the Bureau of Special Services and Investigation (BOSSI).

Wood began his career by infiltrating the Bronx Congress of Racial Equality (CORE) chapter under the name Ray Woodall in 1964. There, he posed as a 27 year-old graduate of Manhattan College studying law at Fordham. He was soon named CORE’s housing chairman and oversaw a voter registration project.

Wood earned his activist bonafides by getting arrested with two others at city hall while attempting a citizen’s arrest of mayor Wagner for allowing racial discrimination on a public construction project. Feminist Susan Brownmiller, a fellow CORE activist at the time, recalled that if “CORE had placed an advertisement in the Amsterdam News describing what it was looking for, Woodall would have fit the bill.”

By 1965, “Woodall” had been reassigned under his real name to infiltrate a group calling itself the Black Liberation Movement (BLM). He was credited with foiling a bomb plot by the BLM that allegedly targeted the Statue of Liberty and other national monuments, just a week before Malcolm X’s assassination. One of the four arrested in the plot was Walter Bowe, who also co-chaired the cultural committee in Malcolm’s OAAU. Wood’s close association with an OAAU member makes it likely that others within the organization would also have known and recognized him.

Wood was promoted to detective second grade for making the arrests in the BLM case. And although his name and a photo of the back of his head circulated throughout the press in the week leading up to Malcolm X’s assassination, the NYPD reported that he was put back to work because his “face is still a secret.”

I registered just to discuss this letter, as I have to say it smells like a forgery Wood's daughter says it is. Here's the list of my concerns regarding the letter:

1. The letter doesn't contain any new verifiable information. A deathbed confession is quite unlikely to avoid mentioning the boss by name, or giving more details of who was in charge of what. Instead, it's all unnamed handlers

2. The letter is written in the third-person perspective rather than first-person perspective. Take the sentence "Thomas Johnson was later arrested and wrongfully convicted to protect my cover and the secrets of the FBI and NYPD." How the hell the person knows that was the case? It's not like he confesses to killing, and it's not that the real killer is ever made. If a person who was there would be writing something like this, he'd include justification for similar conclusions.

3. The letter is awfully sparse on specifics of the infiltrations not already known. What organizations were infiltrated? What leaders compromised? What acts of brutality performed? What happened between 1965 and 1971? It's as if the person not only confessed to the worst suspicions of Malcom X conspiracy theorists - but confessed to these suspicions alone and nothing else. This looks suspicious in itself.

4. The letter looks like an attachment. If it is written to say "I have placed my full confession into the care of my cousin Reginald Wood Jr. I have requested that this information be held until after I have passed away." - this means that there's another letter addressed to Reginald Wood Jr. which would explain all this, because if the letter itself is the only thing in an envelope, then it's an extremely confusing set of instructions for someone to follow. Where's that other letter?

5. The envelope doesn't make any sense. Why would a letter from Huntersville be routed through Charlotte? Why would it be stamped so much later? Why would a person have a rubber stamp template for return address if he is not involved in mass mailing? And where are the fold marks on the letter itself?

Silouan said:
Why would a person have a rubber stamp template for return address if he is not involved in mass mailing?
Click to expand...

These were also marketed to private persons before the age of computers; my father had one. Mass mailers use printed envelopes, not rubber stamps.
You must log in or register to reply here.