At 43:24 in the above live stream of the SpaceX CRS-19 Launch, something slides around the engine. Someone remarked that this looked a bit like a mouse, and some of the more imaginative conspiracy theorists took this to be evidence that the footage was faked.

The video is shot from two sides, alternating between viewpoints, which makes it difficult to follow exactly what is going on. But it's much clearer if we take just the shots from the "mouse" side, zoom in, and speed them up 10x.

A real time version of this is here.

Here we see the "mouse" build up at the top, then break free and slide around. It's followed by a bunch more of what looks like slushy ice (possibly actual ice - or some other byproduct of the jet engine that built up around that point, maybe from what is venting near the top of the image). This slides around and looks like it maybe melts a bit.

So, a fascinating display of space physics. But not a mouse.

It's not ice, it's actually solid oxygen. The white jet at the top is venting liquid oxygen, which is what causes the build-up of solid oxygen.

People why the oxygen does not just boil off into space. The answer is that some of it does, and what's left freezes. The principle is called "Vacuum freezing". Below the triple point of oxygen (or water, etc), it can only exist only as a solid and gas. A vacuum is obviously below the triple point in terms of pressure. So in the vented liquid oxygen the high energy molecules rapid boil away, cooling down the remaining liquid, which will solidify. Putting liquid oxygen into a vacuum is actually HOW YOU MAKE solid oxygen. Here's a demonstration with oxygen:
Source: https://www.youtube.com/watch?v=6RRLBD1bB3E

Administrator · From Sacramento
See:
https://www.metabunk.org/threads/about-metabunk.1966/
Staff member
You can see the ice start forming on the camera that's on the opposite side of the "mouse shot" at 41:12, just after the second stage ignites. By about 41:36 the ice has grown significantly in size. Around 42 minutes you can see it start separating from the vents and moving around the engine nozzle. At 42:10 when the camera switches to the opposite side again you can see the ice that had built up is no longer there; it has already separated and begun sliding around the nozzle. It may also be helpful to point out that this isn't unique to this launch; you can see ice separating from vents on the second stage in just about any given SpaceX launch. You can also see ice sliding around the top of the turbopump exhaust wraparound of the nozzle at around 19:28 in this video from CRS-16 launch. It's smaller and more spread out, but it's there:
Source: https://www.youtube.com/watch?v=Esh1jHT9oTA

Larger chunks are visible at 23:51 in this video from the CRS-14 launch:
Source: https://www.youtube.com/watch?v=BPQHG-LevZM

These are just a couple daytime launches I checked at random, one other I checked focused on the first stage recovery at LZ-1 rather than the second stage video so it was not visible.
Here are a variety of additional examples of ice breaking off the vent and moving around the turbopump exhaust pipe:
19:16, 22:49 - Source: https://www.youtube.com/watch?v=pIDuv0Ta0XQ


26:23 - Source: https://www.youtube.com/watch?v=vsDknmK30C0
I am truly left wondering how anyone, even someone who otherwise believes NASA and SpaceX are "faking space" could consider this to be even remotely reasonable. What exactly is the scenario here? Some little mouse snuck onto the hypothetical "fake rocket" stage and proceeded to walk around on the engine? Meanwhile, the hypothetical CGI guys are at once good enough to put together a video of a rocket orbiting the Earth, but are also so blindingly incompetent as to leave a literal mouse in frame.

How does one even debunk people who are willing to make, frankly, insane claims?

Nth said:
How does one even debunk people who are willing to make, frankly, insane claims?
Click to expand...

You can't... Because then you just become a "Schill" and are now part of the problem.

Nada Truther said:
You can't... Because then you just become a "Schill" and are now part of the problem.
Click to expand...

Sometimes the best you can do is just put accurate information out there for the people on the fence to see and/or to demonstrate just how off-base the original claimants are.
I tend to view things from an evolutionary perspective. I think our ancient brains can easily make a small moving thing into an animal, and thus a potential meal. Our brains are pattern matching machines.
Your tread is great. I used some humor and some examples on other missions as well.
Source: https://youtu.be/bAEJgyA7bcg
@Mick West

how did you know it was solid oxygen? the turbopump runs the same LOX+RP1 fuel as the main engine, but fuel-rich. It means the waste should be water + CO2 + unburnt fuel. or some of them can be from the nitrogen thrusters, and the output should be nitrogen.

how did you know it was solid oxygen? the turbopump runs the same LOX+RP1 fuel as the main engine, but fuel-rich. It means the waste should be water + CO2 + unburnt fuel. or some of them can be from the nitrogen thrusters, and the output should be nitrogen.
Click to expand...

You would think the output is propelled rapidly away.

I'd seen somewhere that this was vented liquid oxygen. Can't immediately find that though

Mick West said:
You would think the output is propelled rapidly away.

I'd seen somewhere that this was vented liquid oxygen. Can't immediately find that though
Click to expand...

I have been searching all day for confirmation that the exhaust is venting oxygen but cannot find anything about that.

The turbopump is deliberately operated at low efficiency by using a fuel-rich mixture, so it won't heat the pump assembly too much. It also gives low-pressure & low-temperature output, and they use it to cool the exhaust.

The output is not propelled away because it is low pressure and the rocket is accelerating. Because of the acceleration, the stuff falls to the gap between the nozzle extension & the turbopump exhaust pipe. When the main engine stops, they quickly disappear.

This is probably the turbopump exhaust as it is only running when the main engine is running: 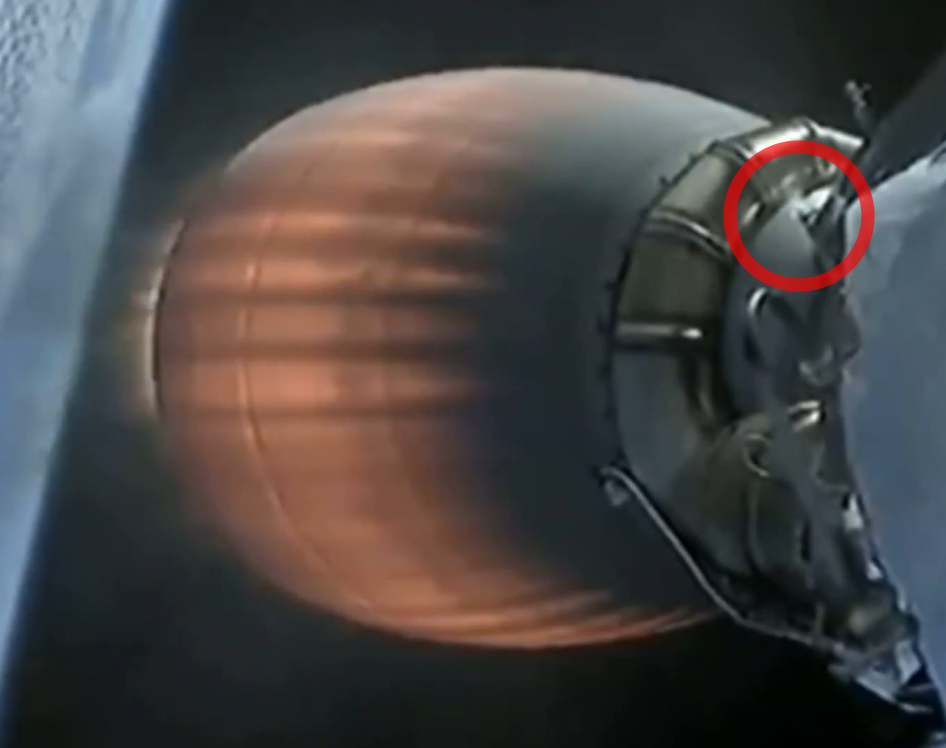 This is probably one of the nitrogen thrusters because sometimes it is active when the main engine is off. 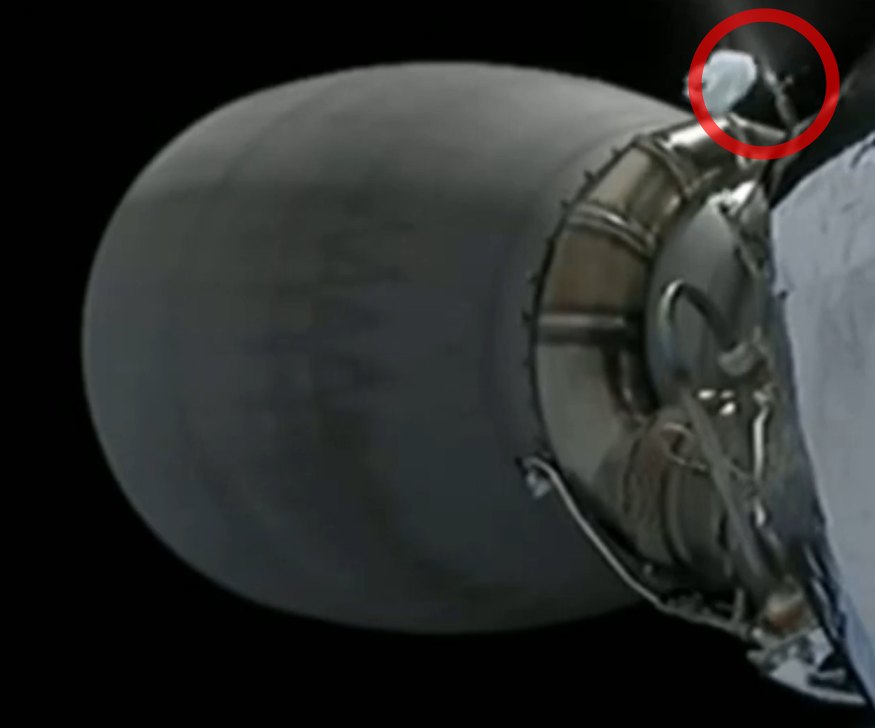 And this is another thruster on the other side: 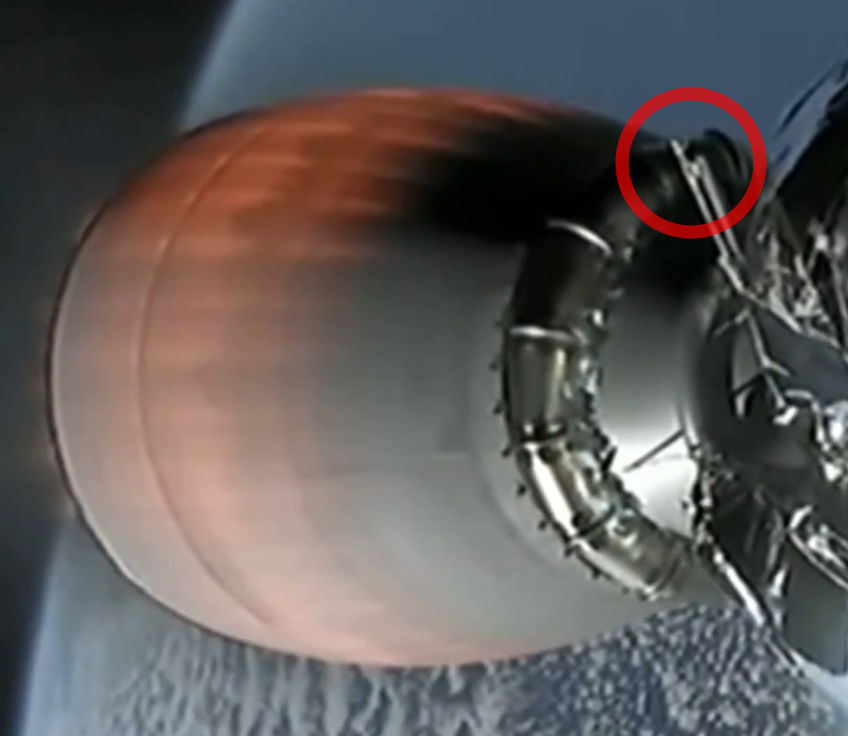 In another video, from Space X, the narrator claims that it is solid oxygen, if he say... The way out seems to be the same for me. In the video I put the narration about it, from another Mission (?its on vid with the respective mission. The points you marked are not thrusters. I had made this mistake before at other vid, calling them "small thrusters" (already fixed at the vid). But you are correct, at one point, other unburned fuel products may come out as chunks of ice, but from thrusters. I even show this in another video I made about thruster plumes. But that one, is the same place of the one the narrator say it (LOX). Here the vid about thruster plumes. All the sources are at description.
Source: https://youtu.be/jCJ-BZC508M
You must log in or register to reply here.

Wednesday at 1:59 AM
Easy Muffin