Whether is is authentic, I have no idea.


Air Traffic recording and alleged Radar footage of the helicopter that crashed north of Los Angeles with NBA Star Kobe Bryant, his daughter Gianna, and 7 others on board. All 9 occupants were killed. The helicopter was a Sikorsky S-76B Helicopter (Tail #N72EX). This video was sent to me, I do not know the original source.

Staff member
It's genuine. The link you posted was ripped off from VASAviation - a channel that regularly produced very detailed annotated radar and ATC videos of aviation incidents.

I've flowing in that airspace myself, and everything about it seems accurate.

I've replaced the video in your post with the VASAviation version.


Several experts have said the weather will probably be a key part of the initial investigation.

The crash occurred as dense fog blanketed the area of the crash.


Kurt Deetz, a former pilot for Island Express Helicopters who used to fly Bryant in the chopper, said weather conditions were poor in Van Nuys on Sunday morning — “not good at all.”

The crash was more likely caused by bad weather than engine or mechanical issues, he said. “The likelihood of a catastrophic twin engine failure on that aircraft — it just doesn’t happen,” he said.


Jerry Kocharian, 62, was standing outside the Church in the Canyon drinking coffee when he heard a helicopter flying unusually low and seeming to struggle.

“It wasn’t sounding right, and it was real low,” Kocharian said. “I saw it falling and spluttering. But it was hard to make out as it was so foggy.” helicopter vanished into the sheet of fog, then there was a boom and “a big fireball,” he said.

Scott Daehlin 61, was taking a break from setting up sound for a service at Church of the Canyon, which is below the crash site, when he heard the helicopter overheard.

“Because of its proximity to the ground, I knew something was wrong. It was hovering real low, like they were searching to land. It was making a slow left turn. It was about 9:44 a.m., and then the impact happened. I heard a crunch. I don’t think it pancaked. I think it hit rotors first...,”

My naive speculation is that the pilot flew on into deteriorating visibility; at the last moment he realized he was boxed in by terrain and was trying to get out.

Probably just a matter of time until speculation about murder/suicide starts up.

One guess about the accident summed up here


"We will probably eventually find out that he got into an inverter IMC or Instrument meteorological conditions. So, the weather was really bad. It just got really wonky and he couldn't get the aircraft coupled to autopilot for whatever reason, and tried to hand fly it and got disoriented and crashed," said Gularte.

He didn't know he was turning.

This YT video includes a discussion about the autopilot.


... if you want to fly a helicopter on autopilot you've got to maintain a minimum speed - I think in the Sikorsky about 65 to 75 knots in order for the autopilot to remain engaged. Below that, the autopilot will simply kick off. So you do not have the autopilot safety feature in the vent that you get into inadvertent instrument conditions. You need to be able to see reference to the ground in a helicopter in order to hover.

So if he goes fast he can use autopilot, but going fast is dangerous. If he slows down he loses autopilot and without sight of the ground he will become disoriented. 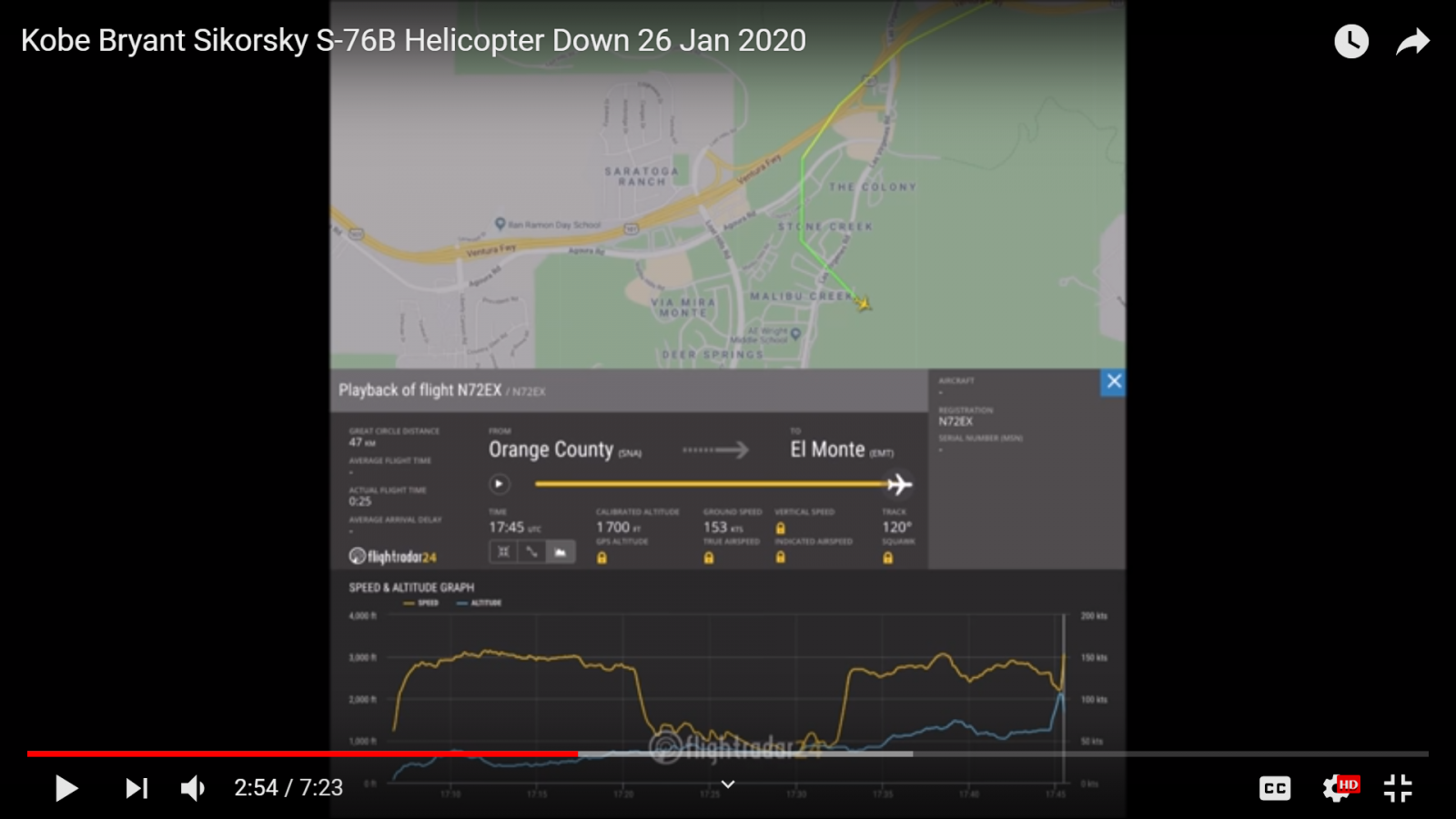 Is the sudden loss of altitude and increase in speed an attempt to gain airspeed and regain autopilot capability?

We may never know for sure if the helicopter had indeed entered the clouds. But if it did, then it had crossed a kind of invisible line. It was now engaged in what air-crash investigators call “continued VFR flight into instrument meteorological conditions.” Basically, a pilot dependent on seeing the ground to stay oriented can no longer see the ground. Amid a sudden whiteout, disorientation can come surprisingly quickly. “When you get in the soup, your senses don’t work,” Cline, the aviation professor, said. “For me, I always feel like I’m falling to the right. Other people might feel like they’re falling to the left, or climbing.”

A trained pilot can stay right-side up by paying attention to the instruments on his panel. But at low altitude over Calabasas, Bryant’s pilot also had another problem. He knew that the ground ahead was rising, and he couldn’t see it. To avoid hitting it, he could keep climbing, and hope that he’d gain altitude faster than the ground underneath him. Or he could slow to a stop and descend vertically until he popped out of the bottom of the cloud.

Based on the subsequent track of the aircraft, however, it seems that the pilot decided to take a third option. According to data transmitted by its transponder, at 15 seconds past 9:45 a.m. the pilot banked to the left, then dove. Why? We can never get into his head to know for sure. But based on my own experience flying light aircraft, the sudden intensification of danger creates of sense of mental overload in which it’s nearly impossible to rationally weigh one’s various options. Instead, one takes the most immediate and obvious choice. In this case, that meant trying to get back into clear air by diving back under the cloud layer while pulling a hard 180 to retreat from the dangerous terrain.

Eighteen seconds after beginning the turn, the helicopter had lost 800 feet and returned to an easterly heading. But what the pilot had failed to reckon with is that the ground rose not only straight ahead, but on the sides as well. The S-76B had impacted a hillside above the Los Virgenes Municipal Water District facility at a speed of 170 mph.