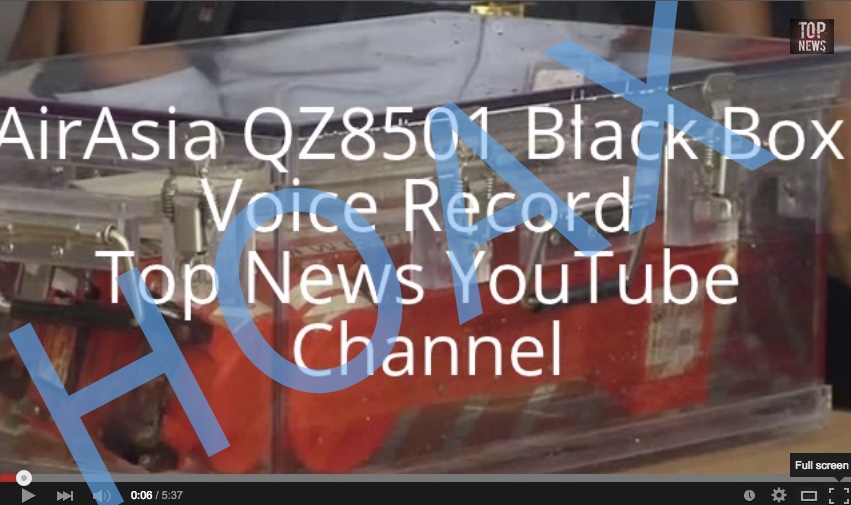 A hoax video was posted on YouTube by "Top News", claiming to be the cockpit voice recorder audio of the Air Asia flight QZ8501.

In fact the video simply contained audio that was supposedly of the crash of Adam Air Flight 574, on Jan 1, 2007. Officials have said this in turn was a fake, however we know that this audio is from at least 2008, and hence is not the AirAsia flight.


Alleged cockpit voice recording leakage[edit]
In early August 2008, a five-minute-38-second digital recording allegedly retrieved from the plane's cockpit voice recorder was widely circulated on the Internet and transcribed by the media.[113][114] The recording, which had been publicly distributed through chain e-mails, begins with what is believed by some to be a conversation between pilot Refi Agustian Widodo and copilot Yoga Susanto before the crash. Approximately two minutes before the end of the recording the autopilot disconnect horn sounded, followed approximately a minute later by "bank angle" warnings from the GPWS and the altitude alerter. Immediately thereafter, as the aircraft began its final dive, the shotgun-like sounds of engine compressor surges and the overspeed "clacker" could be heard along with two background voices screaming in terror, and shouting out the name of God. Towards the end of the recording there is a dramatic increase in windshield noise and two loud bangs (the second larger than the first) consistent with structural failure of the aircraft, followed 20 seconds later by an abrupt silence. It is likely that, when the pilots regained visual ground contact, they quickly pulled up, overloading the horizontal stabiliser downwards and a main wing spar upwards.[115] It was dismissed by the officials who said that it was not authentic and was not the original recording.[116]

The alleged audio can be found here:

While the recording is described as "not the original recording", it seems likely to me that it is actually the Adam Air recording, and is simply not an official recording. The story linked from Wikipedia says:
http://www.thejakartapost.com/news/2008/08/04/adam-air-recording-039not-original039.html


Transportation Minister Jusman Syafii Djamal on Saturday confirmed the widely circulated recording of a conversation from the cockpit of the Adam Air jetliner that crashed in the waters off Sulawesi last year was not authentic.

"The recording currently in circulation is not authentic and is not the original," said Jusman in his message to the ministry's spokesman Bambang S. Ervan, as quoted by Antara.

A five-minute-38-second digital recording allegedly retrieved from the plane's blackbox flight recorder, captures the final minutes before Adam Air flight KI 574 crashed into the sea off Majene regency. It has been widely circulated on the Internet and transcribed by the media.

All 102 passengers and crew aboard the Boeing 737-300 were killed in the Jan. 1, 2007, crash. The plane, registered as PK-KKW, departed from Djuanda airport in Surabaya for Manado, North Sulawesi. However, the plane disappeared off the radar a few hours later while cruising at 35,000 feet.

Jusman said the authentic recording, captured on tape and stored by the National Air Transportation Safety Commission (KNKT) inside a closed box, was a "secret documentation". Jusman is the former head of the KNKT.

"If there are any other parties spreading and listening to the recording without expert supervision, it could lead to the public being misinformed," he said, adding plane crash scenarios were not determined by cockpit recordings alone.

"Please respect the KNKT. The complete and comprehensive report of the crash is available at the www.dephub.go.id/knkt website."