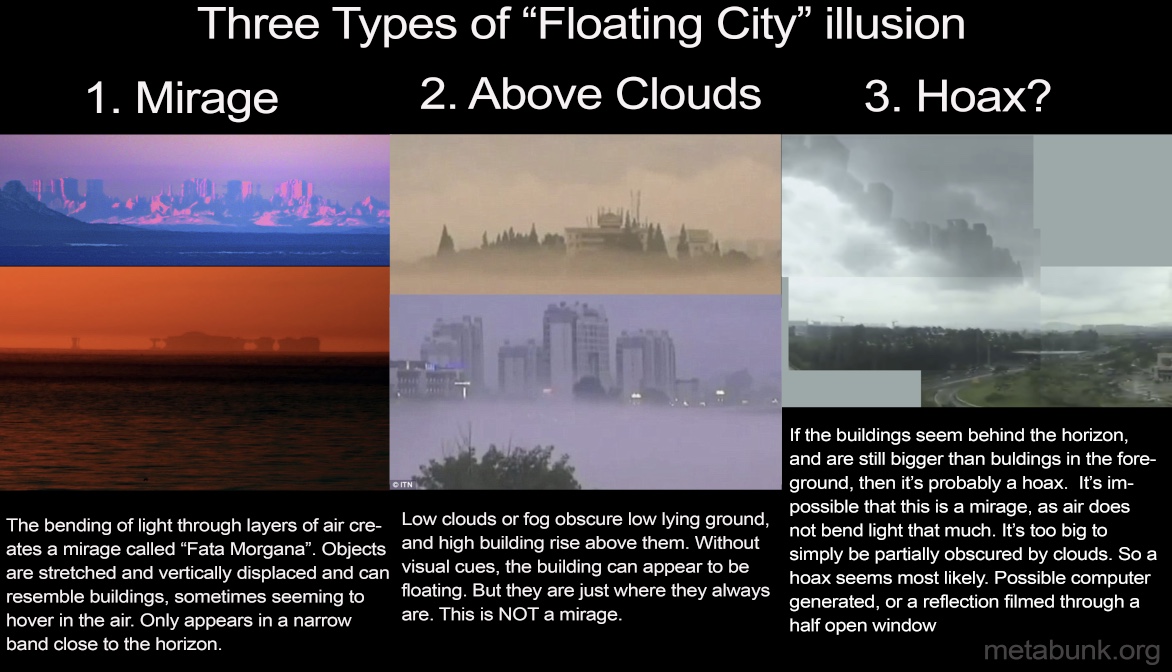 A video is being widely shared on social media (and the "weird news" sections of more traditional media) claiming to show the image of an impossibly large city rising above the fog in the city of Foshan (佛山), Guangdong province, China

Here's a composite image of the Foshan video 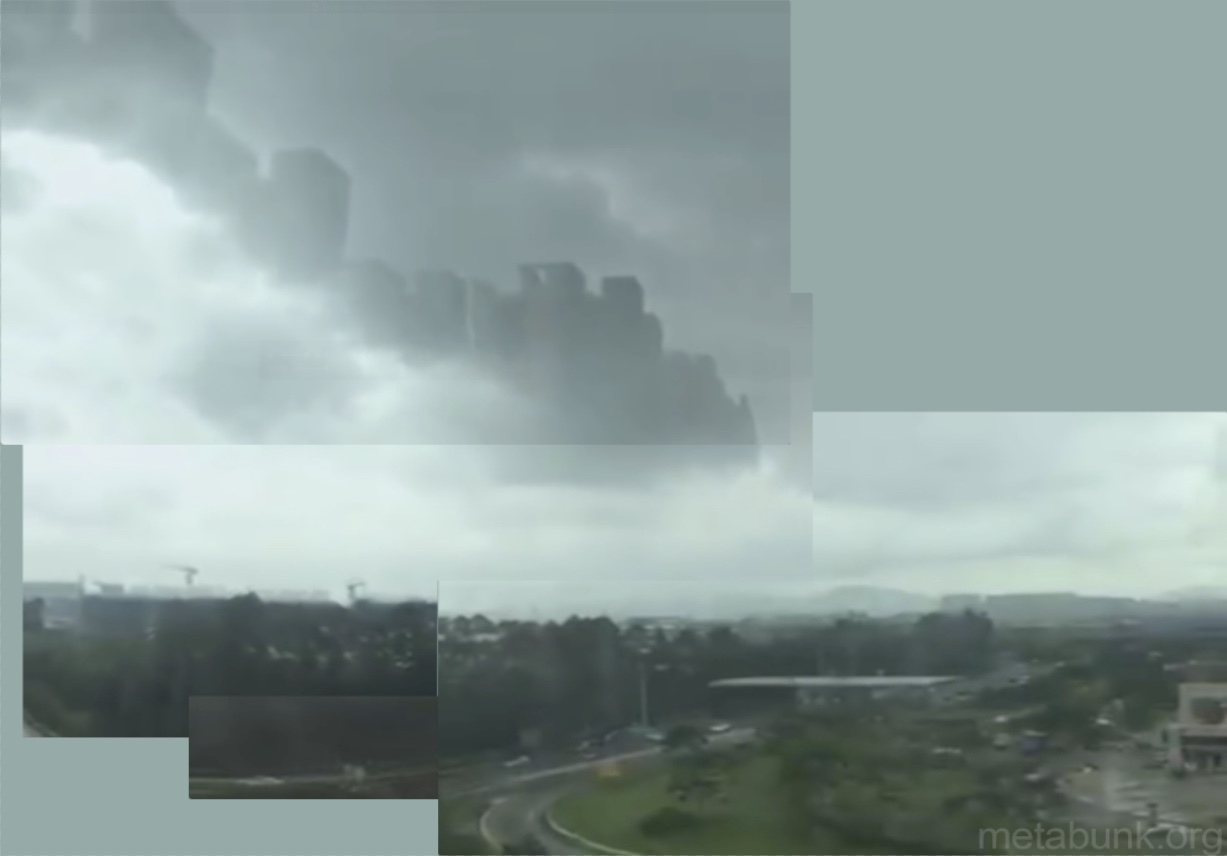 Notice the scale of things here, there are what looks like two construction cranes on the "horizon" to the left, and the buildings seem to loom high into the sky above them.

Some have said this is an example of a fata morgana, a type of mirage where light is bent though the atmosphere in such a way to create the illusion of buildings on the horizon. This is utterly impossible in this case, as fata morgana only creates a very thin strip of such an illusion very close to the horizon, and appears small and far away. It does not create images high in the sky.

Besides, a fata morgana might create the illusion of buildings by stretching landscape features, or it might distort existing buildings. But what it cannot do it create a perfect image of existing nearby buildings, complete with windows. 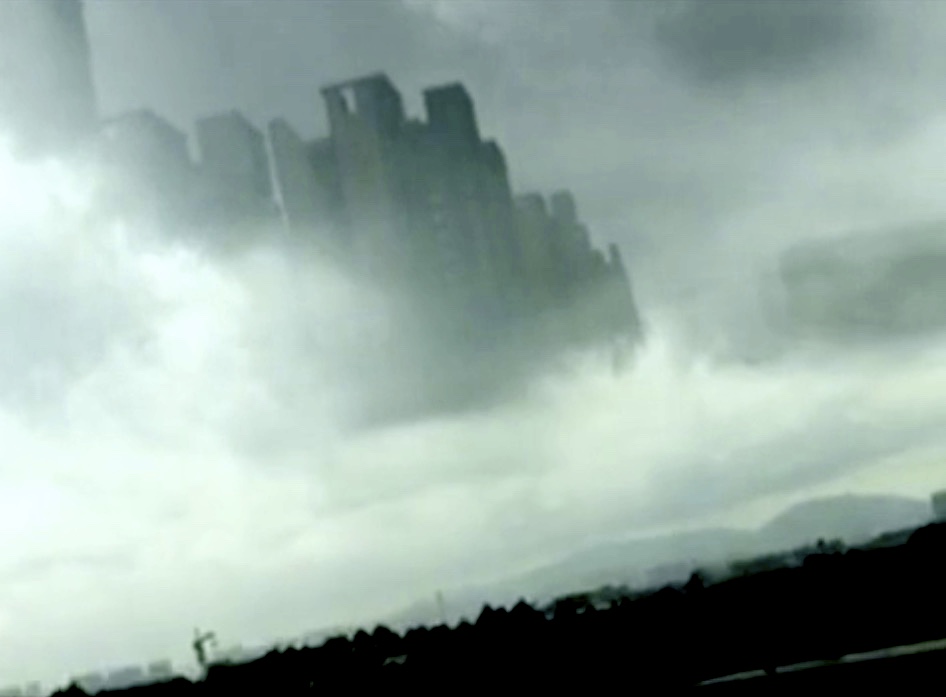 The fata morgana explanation has been promoted with quotes from Atomospheric Sciences professor Kenneth Bowman, who gives a detailed explanation of what a fata morgana is. Unfortunately this was quoted in such a way that it seems like he though this was the explanation here. When I contacted him about this he said:

I suspect that you are correct. It looks too real to be a Fata Morgana.

So no expert has actually looked at this video and said it was a fata morgana, and they won't because it's obviously not.

The second and more common type of "floating city" illusions is with buildings that are simply rising up out of clouds or low fog, and hence appear to be floating above them. This has led to "floating city" stories in the past, with this recent example, also from China.

This is simply a photo of building across the river, but when cropped it appears like they are floating, which led to all kinds of wild stories of "ghost cities". This actually came from mistranslations of the original news reports, where local people (who knew exactly what they were looking at) were simply marveling at how pretty the scene looked, with the buildings appearing to float above clouds.

Could the Foshan video be of real buildings obscured by clouds? It does not appear so. Look at some real buildings in Foshan (and keep in mind it's not entirely clear if Foshan is the actual setting of either the top or the bottom of the video. 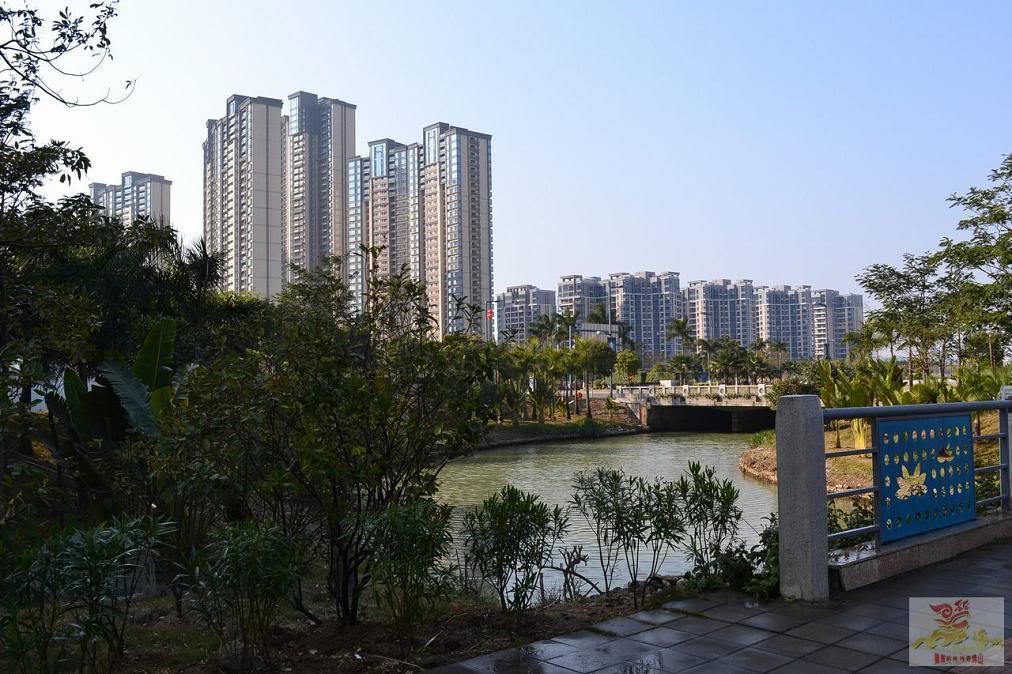 Consider what it would take for these buildings to appear like they do in the video, with the road beneath them. The scale is simply impossible. The image has to be composited somehow, and the possibilities are:
It's unfortunate that many people leap for the "fata morgana" or other mirage explanation when it's quite clear that this is far too high in the sky to be anything like that.

The image actually looks quite like this older image taken from a video published in June 2015. 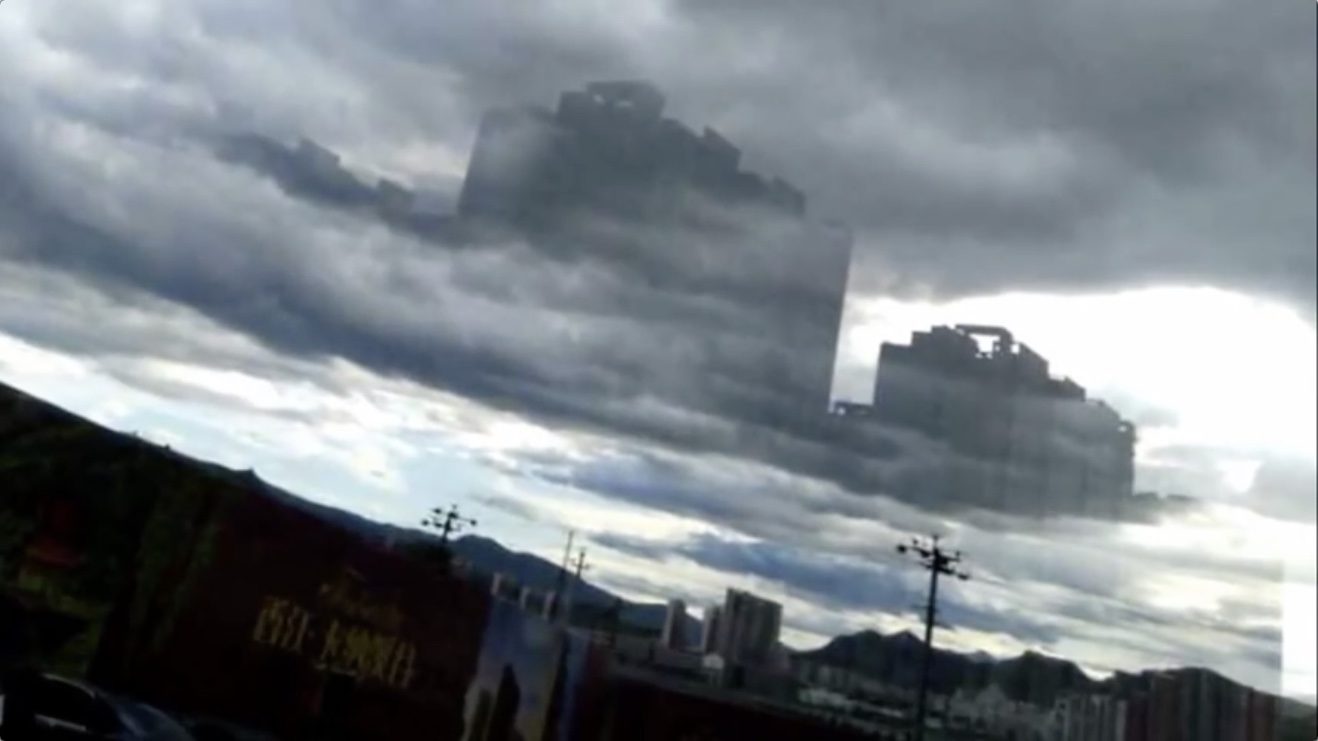 Here we can see the image is more obviously faked in some way. The "floating" building on the right goes in front of the mountains. This means it cannot be some kind of natural phenomena. The image is either a digital composite, or it was filmed through a window or other sheet of glass.

While the two examples are not identical, there's enough similarities to think that they were faked in the same manner.

Here's an example of how a reflection from a half open glass door (opening outwards) can appear to be an image in the sky.

Here's an example of someone posting a reflection on Weibo, and calling it a "Mirage" (海市蜃楼)
http://weibo.com/1560923874/Bjzjrjlqd 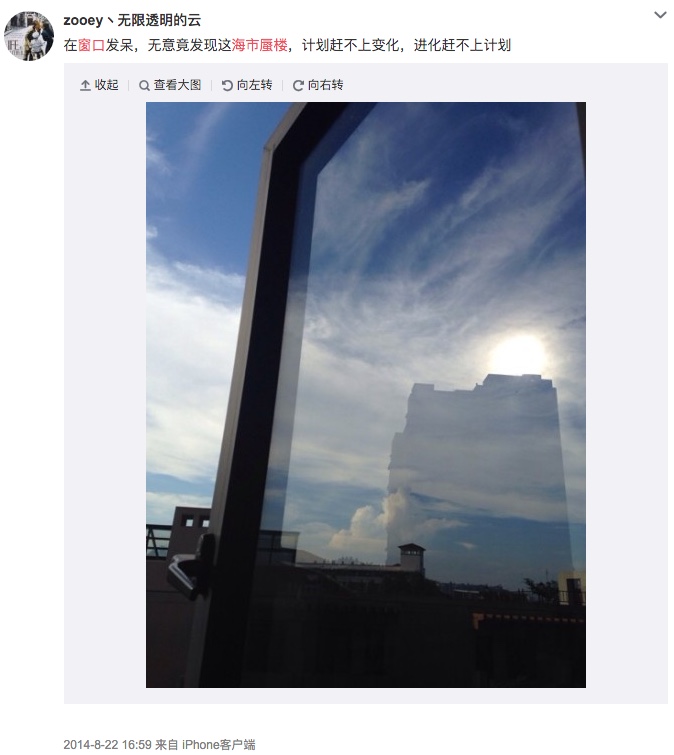 On Weibo it's quite common to see the word "mirage" used to describe a photo of buildings in cloud. i.e. it's generally used figuratively. 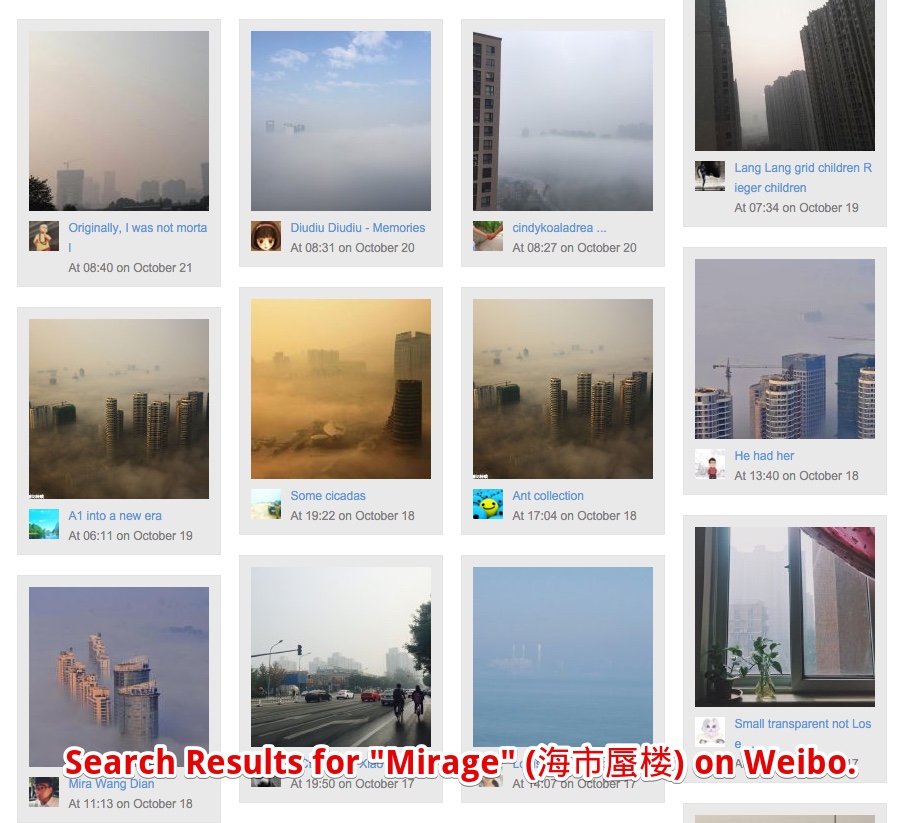 The individual characters of 海市蜃楼 translate as

Administrator · From Sacramento
See:
https://www.metabunk.org/threads/about-metabunk.1966/
Staff member
This story claims that the shot occurred accidentally during filming an aerial shot for a comedy film called "Clown".

Given the lack of other information, it's quite possible this is just a weak piggyback attempt at viral marketing, or just a lame joke.


"Clown" no money to do special effects? God for the United States is now a mirage

Comedy film "clown" is currently in Guangzhou hot shot. Recently, Guangzhou discovered somewhere on the cloud mirage wonders, the crew was being aerial, it happened to capture the spectacle. 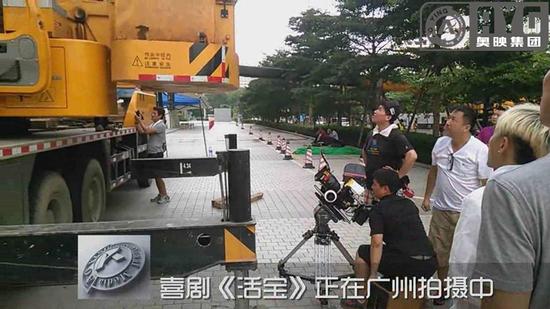 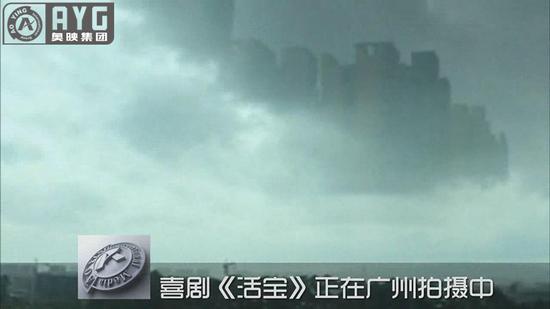 LOS ANGELES comedy film "clown" is currently in Guangzhou hot shot. Recently, Guangzhou discovered somewhere on the cloud mirage wonders, the crew was being aerial, it happened to capture the spectacle.

This time, the "clown" China and South Korea established excellent production team, the first 360-degree angle of the new high-definition aerial tactics. After the crew found a mirage scene in the first time, have stopped their work and looked "Laputa" clouds on the sigh, to see such a shocking scene during the shooting, said he was pleasantly surprised everyone, it can be considered a hard shot reward. The director is jokingly said: "We do not do 5 gross effects, which is totally free, ah, is not blessed you?"

It is reported that, "clown" is expected to lock the summer 2016 release.

deirdre said:
i'm getting confused. so.. are there 3 'videos'/photos (oct 7th in Fashon, Oct 12 th in Jiangxi, and June 12th in Hebei Chengde)?
with 'matching' buildings (somewhat) and matching cranes? My mind cant sort them I give up.

@Mick West So a friend brought this up to me coming across that video and these photos from some youtube video making the rounds again. I also noticed in the photo on the right, the yellowish building seems to have a line going up the length of it that connects to a cloud. I know you felt it was a reflection but do you think it may be photoshops or is a reflection more likely. Because the one on the left is definitely a reflective illusion but this one just looks fake.
Last edited by a moderator: Mar 8, 2021
The video is easily questionable. Considering it's a short low quality video and there isn't anything else. How would something so huge only be documented by one video and a couple of sketchy blurry photos?
There is an entertaining video on this "floating city" over on YouTube by Captain Disillusion, an FX guy who debunks viral videos. (And anybody checking it out, no, I don't understand the weird make-up thing he is doing either.) His walk through of how easy it is to fake such a video is good. In general, his videos are, I think, worth watching, if for nothing else than to help develop a more practiced eye in spotting FX being used to create viral videos of Not-Actually-Fata-Morgana, Not-Actually Unidentified-Not-Actuallt-Flying-Objects, and the like. Towards the end, and after earlier noting inaccuracies in CNN's (and other news outlets) reporting on this that would have been cleared up in the fourth line of the Wikipedia article he theorizes they looked at to find the term Fata Morgana, he makes the point that there were (at that time)

...over 93,000 reports and no one got it right. And maybe that's OK for a "floating city in China," the world never actually believed that could be real and a proxy-exclamation of "mirage" was good enough, but -- what about other news stories where the details matter, where political nuances and scientific accuracy can shape public opinion about important issues? How many journalists don't read past four lines of Wikipedia before writing those reports? And how many click-hungry bloggers post THEM without checking?

Yeah I liked his video on it a lot! Mick did a good job analyzing the purported photos as well. Which is all grainy low quality stuff. It's amazing how despite this it picks up such momentum and so many don't even question it.

derrick06 said:
It's amazing how despite this it picks up such momentum and so many don't even question it.
Click to expand...

Most humans need imagination in their lives. Magic. Dreams and fantasies. The more science debunks magic and myth, the emptier we feel. Floating cities are like King Arthur type stuff (the fantasy not the historical stuff).

The Flying Dutchman being debunked as Fata Morgana is interesting from a scientific viewpoint, but it's kinda a bummer the magic of the myth is gone.

deirdre said:
Most humans need imagination in their lives. Magic. Dreams and fantasies. The more science debunks magic and myth, the emptier we feel. Floating cities are like King Arthur type stuff (the fantasy not the historical stuff).

The Flying Dutchman being debunked as Fata Morgana is interesting from a scientific viewpoint, but it's kinda a bummer the magic of the myth is gone.
Click to expand...

Honestly I have the opposite view, science is the thing that brings magic and wonder into my life, the true universe is amazing on its own.

jarlrmai said:
science is the thing that brings magic and wonder into my life,
Click to expand...

which is why you hang out on Metabunk.
You must log in or register to reply here.