Update by @Mick West: The video shows the moon rising over the horizon. It initially looks a bit of an odd shape due to atmospheric distortion. But there are many similar videos showing the same thing, like this one. The following comparison simply crops the region of the frame where the moon is rising for both the known moonrise video, and the "grey object" video. Nothing else was altered. The grey object is the same size, same speed, same color as the moon, and it comes from behind the Earth. The only thing that differs is the lightning, with the brighter Earth making the moon look darker, and the phase of the moon altering the shape.

So it's just the moon.

At least a couple of sites (huffington post and inquisitr if you're interested, both have links to the video) have recently made mention of an incident on January 15th involving NaSA's live feed from the international space station.

During live feed, a grey object comes into view, and suddenly they cut feed, and then come back into feed with a different camera. I did not see this live, I can't verify if that happened or not but I'm sure someone here can.

Here is a shot of the object: 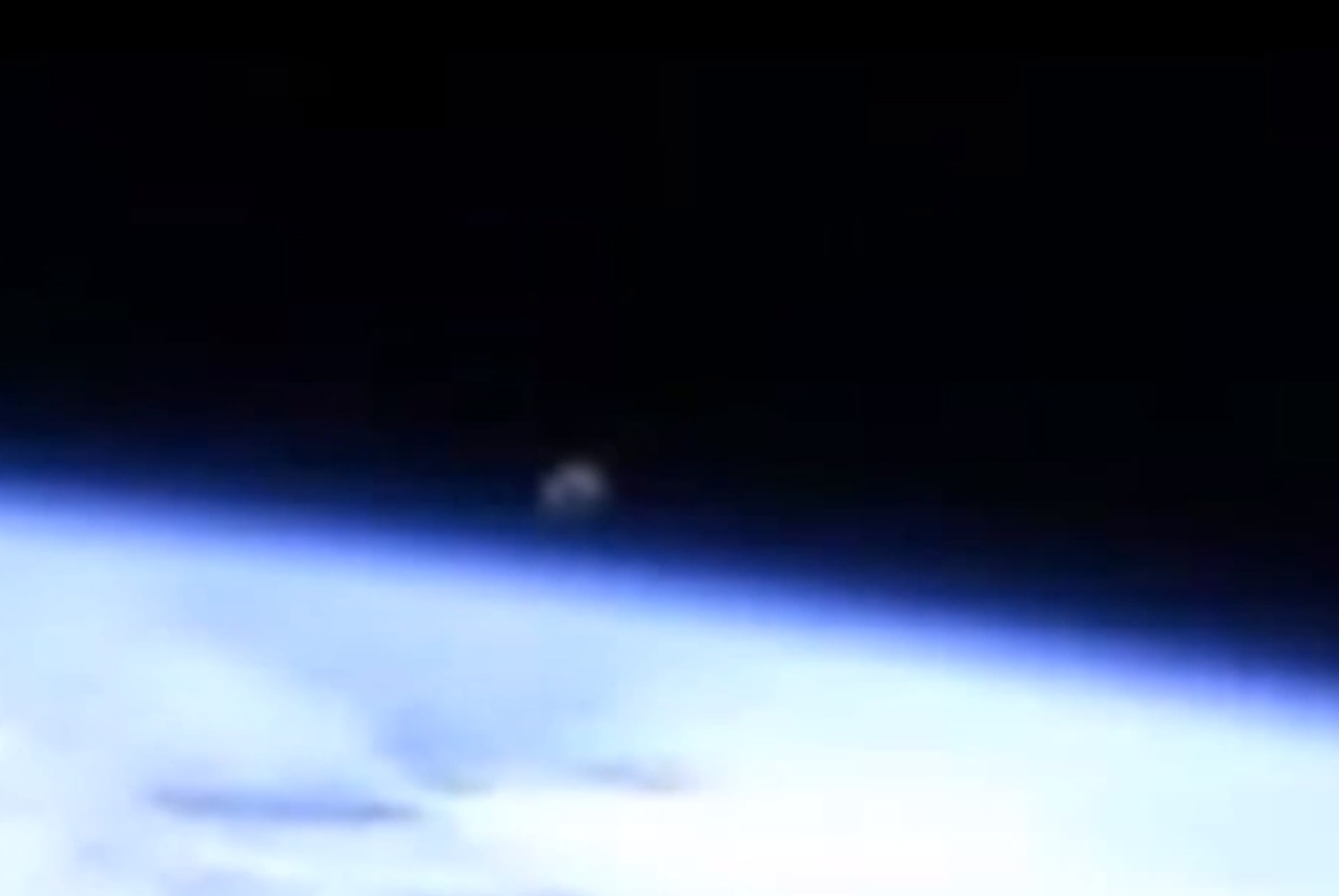 This raises a couple question:
1) was the camera cut away because that object came into view? (Or just coincidental timing?)
2) what is the object? (space debris, aircraft, or classified object like satellite? Something else?)

Perhaps some of you folks can shed some more light on this subject. I have limited internet access at the moment (just a phone, and the screen is cracked.)
Last edited by a moderator: Jan 22, 2015

The moon appearing over the horizon perhaps?

Then again, watching the video a few times, does it seem that the object moves along with the camera, and not the background.

Probably not using the correct words, but is it an artefact on the lens and not orbiting the earth?

Does it say anything on this page regarding the camera? I cant tell.

it does mention space debris on jan 15th and jan 16th logs, but i'm not sure if that can relate to the grey thing we see as the ISS goes around the earth 15 times a day.

jan 15 2015 Conjunction with Object #27317: Ground Teams are evaluating tracking data for a possible conjunction with Object #27317. The debris is small, experiences about 7 times as much drag as ISS and is reasonably well tracked. Concern level on the item remains high after several tracking updates were received. Time of closest approach to ISS is Friday, January 16that 9:03am CST. If required, a Pre-Determined Debris Avoidance Maneuver (PDAM) will be performed at 6:43am CST.

Auldy said:
Then again, watching the video a few times, does it seem that the object moves along with the camera, and not the background.

Probably not using the correct words, but is it an artefact on the lens and not orbiting the earth?
Click to expand...

yup, just watched it a couple of times with my missus' tape measure from her sewing kit blu-tacked to the monitor* and it stays static in relation to the edge of the shot, so dust on the lens or a fault with the camera perhaps?

As for the cut away, no idea but two things spring to mind (if it wasn't just co-incidence)

1) Hey Dave, whats that on the ISS HD feed, looks like dust to me, quick cut to another camera before its all over You-tube as proof that UFO's exist.

2) Hey Dave, whats that on the ISS HD feed, looks like dust to me, I know lets quickly cut the feed and come back with another camera and see how many people think we are covering up a close encounter... Gee, ain't i a stinker!!

The video seems to be consistent with that of a moon rise as seen from the ISS. The space station and the moon orbit in the same direction as the rotation of the earth. It looks like the camera is facing forwards, but I was surprised to learn that it's actually facing the "back" of the space station with the earth racing past beneath it.

The speed of the moonrise also seems to be consistent with other footage of the same.


Isn't it amazing enough that live footage from an orbiting space station can be sent to your PC or cell phone. There really is no need for YouTubers to embellish such an incredible accomplishment with UFO's.
Last edited: Jan 22, 2015

yup, it's BIG. size seems consistent with moon to me too.

Yeah, it was the moon. They didn't cut off the video when it appeared, they delayed cutting it off UNTIL it appeared. I can't find the explanation I read because of the sheer amount of crap you get googling "ISS UFO moon," unfortunately.

The thing to remember about space is sheer scale. If there were another station the size of the ISS it could be well inside the "pizza box" (the 1.5x50x50 km proximity zone around the ISS) and setting off alarms well before it were visible on video of that quality as more than a pixel or two. And the ISS is big, it's pretty easy to see from the ground, and with a good pair of binoculars you can see the shape of it. To be in low orbit, this thing would be dozens of kilometers across, and would be as big and as bright as the full moon from the ground.

Anything visible is either very big, or very close. Most ISS (or space travel in general) UFOs are just bits of ice from water or gas escaping the station, anything close enough to show up would be setting off alarms.

Staff member
I added this gif to the OP,

Possible to get a gif from the video in question just for thoroughness?

hmm. you would think there would be more moonrise videos on youtube, like people do with live bird cams etc. ("best of" clips and all)

They should also do the math and figure out when we can view the moon rise live. : (

here's an old moonrise from 2012 before the HD camera:


whats really cool is from the ISS, at certain times, the Man in the Moon looks like Bob Geldof!

Mick West said:
I added this gif to the OP,

Sorry if this has already been covered but presumably it can be readily confirmed whether the moon would appear in the same position at the time of the live feed given that the position/direction of the ISS is known.
D

It's amazing and beautiful to watch. I believe some were saying NASA was deliberately trying to cover up a ufo. I'm glad to see it was proven to be the moon. Sometimes people get caught up in rumors.
You must log in or register to reply here.