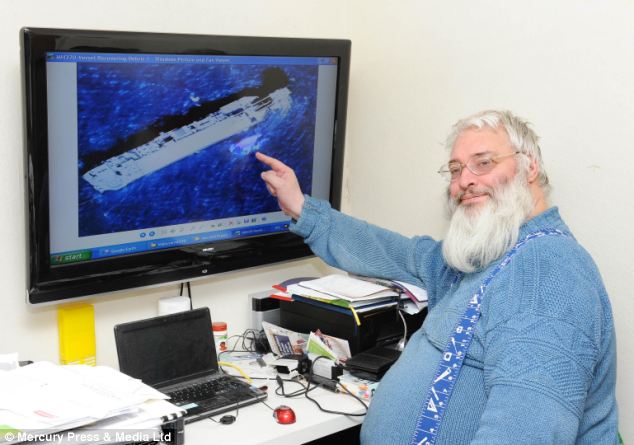 A British marine archaeologist claims to have found the missing Malaysia Airlines flight MH370 more than 3,000 miles from where authorities are currently searching.

Tim Akers, 56, had been studying Australian waters off Perth for years in a search for the remains of the country's lost WWII ship - the HMAS Sydney.

This one should be easy 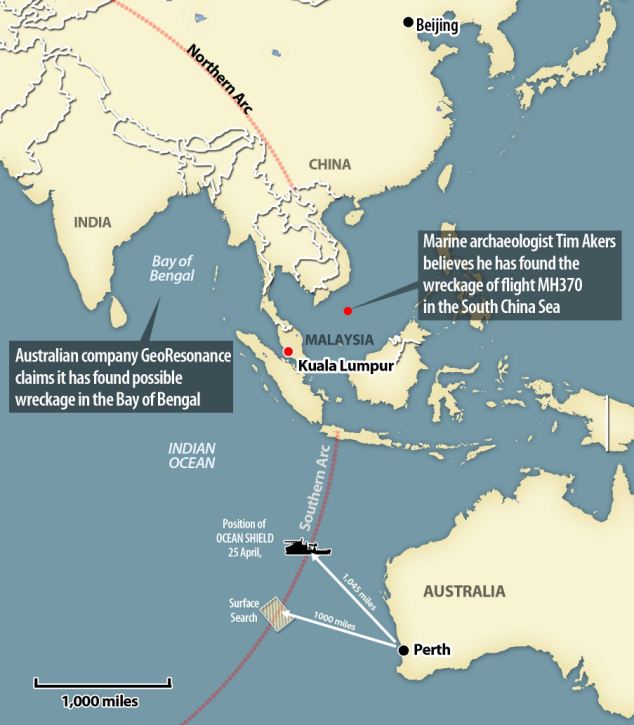 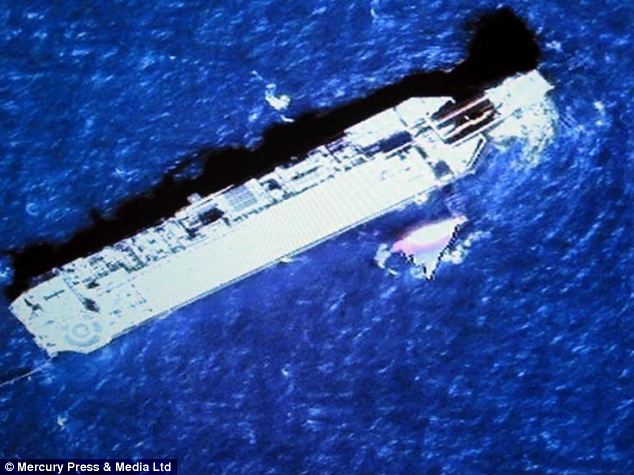 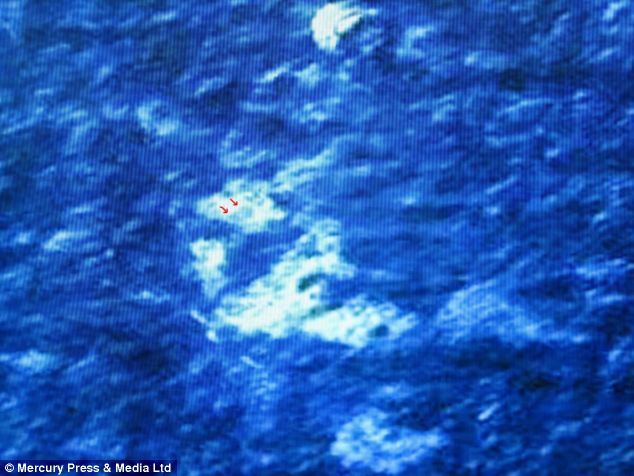 The arrow is believed to show two plane windows in aeroplane debris, which Mr Akers said could be from flight MH370 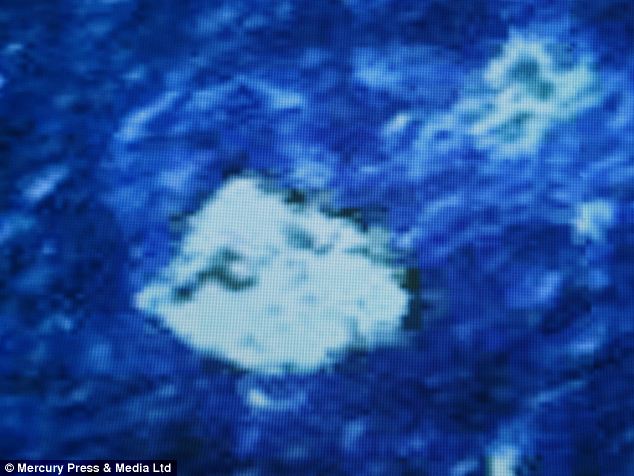 Mr Akers said he has identified sections of the aircraft close to where Vietnam authorities received a report from oil workers who saw a plane burning coming out of the sky. Pictured is debris believed to be from flight MH370

The only thing is, if it's right next to an oil rig, wouldn't they notice?

My very first reaction to the photo... "Shopped". I may be wrong but it looks very fake.

TWCobra said:
My very first reaction to the photo... "Shopped". I may be wrong but it looks very fake.
Click to expand...

There is a rig there which appears active. The air of mystery around this flight makes it hard to believe that the debris has been lying in such an obvious and visible place. But I agree with you @TWCobra, that colored piece near the rig appears chopped. But then again, he may have highlighted it the same way he highlighted probable plane window in the next photo
D

The images he is using, were, according to Google Earth, captured in December 2005. On Google Earth, the oil rig that he has identified as being the Songa Mercur is at +10° 26' 29.46",+108° 22' 53.42" whereas the oil rig worker who saw a burning object stated that his rig was at +08° 22' 30.23",+108° 42' 22.26"; quite a long way between the two and 9 years apart. It doesn't even look like the SM. Only a small high res. section has been included on Google Maps, but there is an expanded area on Google Earth (click on the clock at the top to show historical imagery) which shows the oil rig and all of the boats he is talking about. The image of the larger vessel apparently retrieving wreckage appears to have been shopped to make a bow wave splash (?) look like something solid. This vessel has been tagged on Google Earth as the FPSO Cuulong MV9, a large offshore storage tanker moored in Vietnam's Sutuden oil field.

His website which details all of his imaginings http://www.merlindownscience.co.uk/malaysian-flight-mh370/
S

Hey fellas, I don't think that photo is shopped at all. I'm afraid it's worse.... Well bad for Mr Timothy Akers and his reputation anyway.
OK this is what they call a Floating Production Storage Ship it is basically a floating oil rig. What do most oil rigs have in common?
Answer: a large burn off tower
The photo of the supposed debri is just what they call an oil flare.
Now if you turn the picture upside down you will see it much easier. Note the wind direction by the boats position in the water and the direction of the flame. Unfortunately Timothy Akers has been looking at ink blots for far too long. I must admit that it took me a while to see it and yes I even thought for a while this man had either shopped it or he's found an amazing flat out cover up conspiracy! But the guy is is just a bitter old cook or worse a crook selling snake oil to the nieve and vulnerable. See his website Merlindownscience.com where he desperately tries to debunk the credible and promote his ridiculous software. Though he dose have a couple of good points
It's safe to say this and anything else he has published is all rubbish. 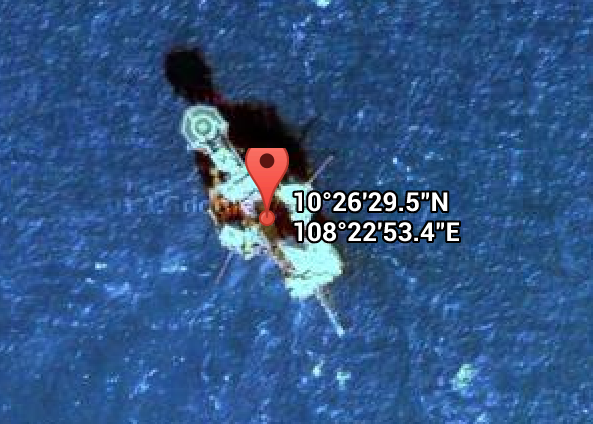 It's clearly a platform, whereas the other looks like a ship. 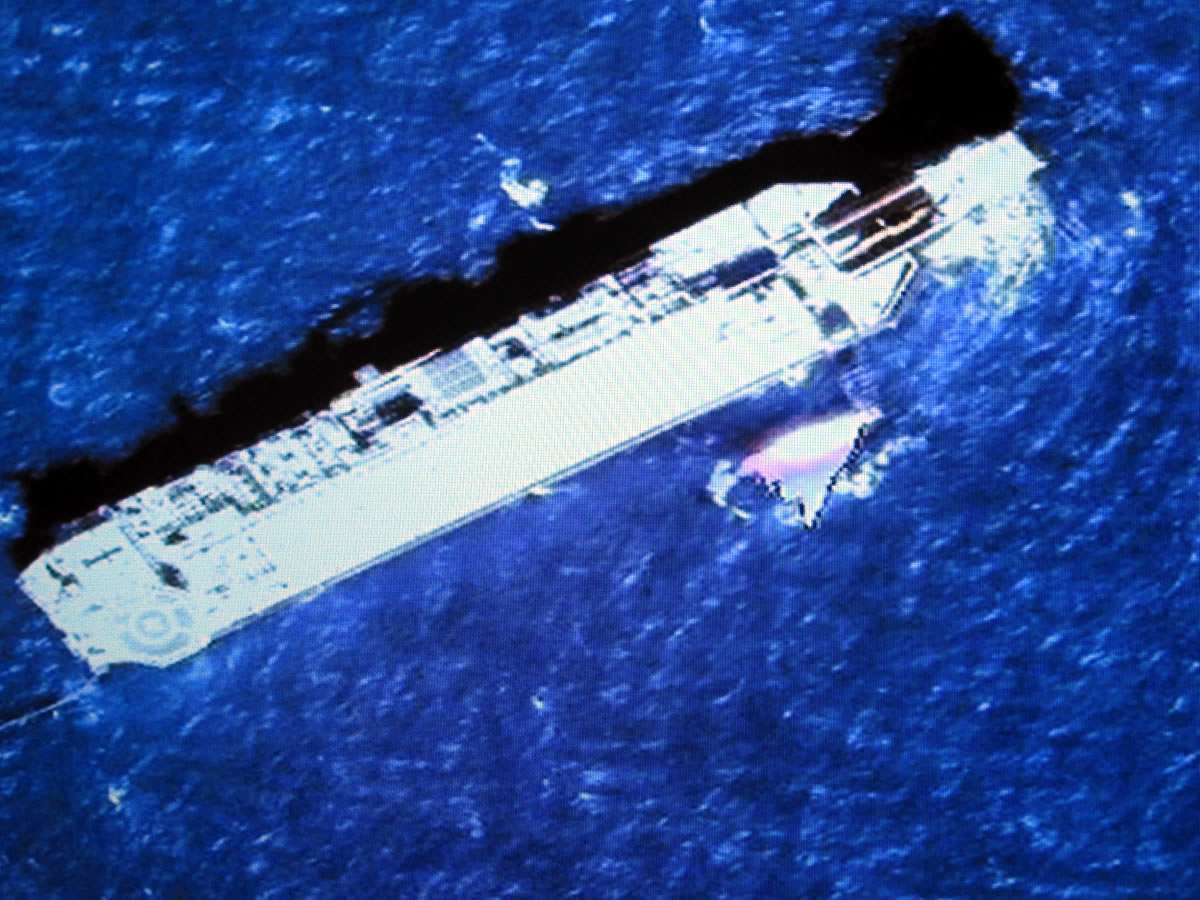 He's actually claiming MH370 wreckage has been found and recovered in these pictures, so he's alleging a cover-up of some kind, as well as a criminal waste of the search effort.


Taking a back seat and following events for a couple of weeks or so resulted in our noticing images released by NASA showing what appears to us to be wreckage from a jet plane being retrieved from the sea and loaded onto ships. In this image (left) notice the prominent colour markings on what seems to be a section from the rear of an aircraft fuselage. These markings appear to us to match the standard colours displayed by Malaysian Airlines.

Here he clearly thinks the colours in the image are real, but to me it looks like an effect of light overloading the sensor or something like that.
(image he's referring to is the same one posted above)

(note that post I'm responding to was first posted on reddit http://www.reddit.com/r/MH370/comments/24hbke/marine_archaeologist_tim_akers_theory_might_back/, not that there's anything wrong with that)
Last edited: May 5, 2014

spf said:
OK this is what they call a Floating Production Storage Ship it is basically a floating oil rig. What do most oil rigs have in common?
Answer: a large burn off tower
Click to expand... 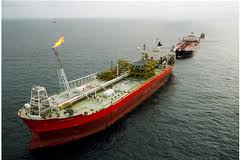 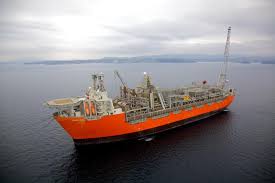 There are many different sizes and layouts, but generally the burn off tower does seem to be at the opposite end to the helipad (which of course makes good sense).
I think you are correct and this is a likely candidate of cause for the image artifact.
google images
Last edited: May 5, 2014
D

Have a look at the images posted on his website http://www.merlindownscience.co.uk/malaysian-flight-mh370/

I would say he is using Google Earth Pro as the images are of a higher resolution, but are definitely the same.

Oh okay, thanks, I do see that he has also used the old google earth picture and is speculating it is part of a current operation. 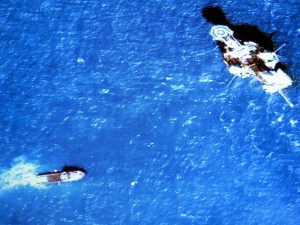 This image shows the Songar Mercury oil rig in the South China Sea, upon which Michael McKay was based, together with what could be a supply vessel which may or may not be involved in the salvage operation detailed below.


I don't get any images at all for the other co-ordinates through maps or google earth, the only picture available is the oil rig.

there is an expanded area on Google Earth (click on the clock at the top to show historical imagery)
Click to expand...

The fuzzy circle turns into a larger square area.

Those co-ords are outside the image area. Zoom out and you can see the boundary of the square image area. Google Earth generally only includes images of small ocean areas if there is something of interest there. You have to use Google Earth, not Google Maps.

They use the same data anyway? Google earth just has more features.
Whatever, he's certainly confusing things and getting his data wrong.

Sound familiar? I tried to find more detail but failed.

What I did find though was a complete run-down on exactly how the aircraft was lost http://www.australias-titanic.com/final-demise/


We wish to point out that Merlindown has not carried out this research for the sake of sensationalism. Neither has it been done for profit. The reasons for our doing what we have done, and making our results available on this website, is purely and simply to bring out the truth and to provide the families and friends of those who died on Malaysian Flight MH370 with their first steps towards closure. We feel that to attempt to generate any form of profit from the deaths of those on the flight, or the suffering of their loved ones, is both immoral and exploitative.

As puzzling as it all seemed in the beginning, we now know why so much confusion reigned in the aftermath of this terrible (and preventable) disaster. You might ask if it was preventable and the answer, quite simply, is yes, due to the aircraft not being fit to fly. But first we must look at what happened on that day and the months leading up to its fateful departure.

MH370 was not being maintained properly.....

The amateur investigator has some pedigree in martine detection which means his claim should not be dismissed out of hand.
You must log in or register to reply here.