Staff member
This is a fake story. It's from the satirical (joke) site Internet Chronicle, which posts "almost believable" stories in the same vein as The Onion, but with a focus on conspiracy theories.

At the Chronicle.SU, we take truth seriously. We take what we do so seriusly, untruths at chronicle.su are punishable by mutilation or death.
Sadly, chronicle.su is not of this earth. After crash landing in an asteroid December 30th, 1976, the alien husks of Chronicle editors rapidly adapted to Earth climates and bacterial flora. They are able to survive naturally in the wild and reproduce freely.

Here at chronicle.su, we take a liberal stance on drug abuse and theft of intellectual property, but that does not mean we are liberal because liberals are faggots and I ain’t no steer-boatin’ queer!

Receiving tweets twice daily via fax from religious advisers impregnates our right-wing furnace of hate, enabling us to bring you the most horrifyingly sensational headlines you’ve ever seen, or your money back – guaranteed!

If you wish to write us spam, please use press@chronicle.su and we will get back to you at our earliest possible convenience, or whenever.

The staff at Elf Wax Times takes the job of bringing you accurate new insight into present-day issues like terrorism and the ever nearing apocalypse, but today we’re taking a little time out of the normal grind to show you, our readers, about how we bring you so much truth with so little work.

The Elf Wax Times is updated daily from our secret headquarters in a location too dangerous to disclose. In our early days, we updated our site by abusing public libraries and were soon barred from using public computers by insidious government officials trying to destroy the freedom of press. The EWT trips key phrases in the NSA supercomputers at a more efficient rate each and every day, as our team of computer scientists devise new ways to trick users into finding us through Google. Windows 3.1 is the EWT’s operating system of choice because our office computers are scavenged entirely from dumpsters. A small portion of our editorial staff still prefer the even more useless MAC OS 1. The banal and function-oriented computer systems we employ eliminate any activity that may deter from our tireless efforts to reveal all conspiracies as truth.

When our reporters are given an assignment, we like to take a liberal stance on due dates and content. Our writers do not try to complete their postings within a given amount of time, because time is really just an illusion which is obviously a very bad foundation for truth to be built upon. In addition, certain topics which may appear unrelated are in actuality a paradoxical snythaesia of ideologies. In laymen’s terms, this means that Elf Wax Times does not use normal conventional methods of reporting. We tackle abstract issues abstractly rather than rationally, and rational issues by exposing irrationality. In essence, we fabricate a truth which gives a greater understanding than conventional truth. We are confident that our readers will remain assured that our writer’s compensated version of reality provides the average reader with a greater grasp of the truth than other more conventional news sources.

Content from external source
This story has been knocking around for a while, but I did not bother to write a debunk because I thought I was obvious to most people that it was a joke story. Unfortunately it seems that many people have trouble distinguishing satire from fact, and other people have no problem exploiting this by re-publishing the joke story as if it were real. 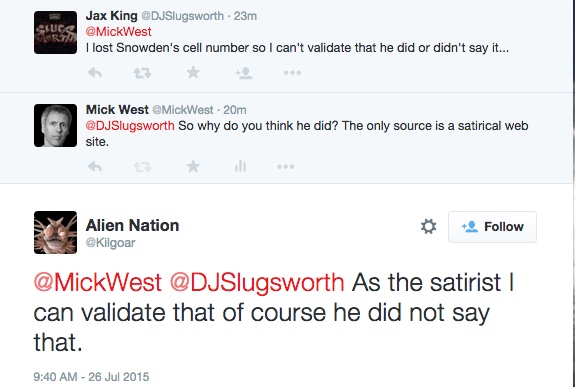 Staff member
If there's any doubt if Internet Chronicle is a joke site, their current story "Snowden Reveals Revolutionary Hacking Method" just links to a YouTube video with some guy doing a rather laboured joke about hacking government websites with a scientific calculator, and being untraceable by clearing your browser history. It's obviously a joke, but it's also inevitable that some people will think it's real.

It's being shared by sites like Worldtruth.tv. Incidentally I notice that sites of that nature keep repeating the same shares on their Facebook pages with links to the story on their website. Almost as if they want people to visit their site or something...

To my mind though it's not necessarily a bad thing that people are sharing this story as if it were real, it gives you a chance to gently point out how easily they were hoaxed because they didn't check the source or the facts
Last edited: Oct 20, 2013

As tempting as it can be to satirize conspiracy theorists, this really goes to show how unwise it is to do so because once bunk (satire or not) has been brought into the world, it is virtually impossible to abate it.
You must log in or register to reply here.

Yesterday at 1:22 AM
Bruce Lansberg

S
Does this video footage show a dragon (sea serpent) attacking a manatee? [No]