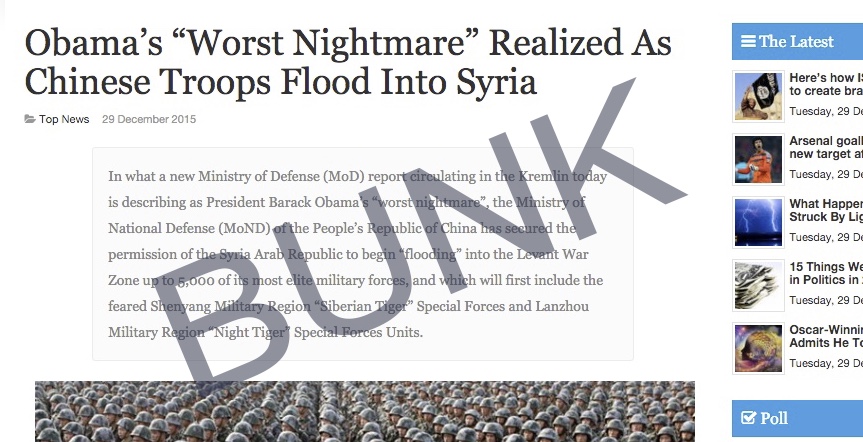 Various sites have been repeating this fake news story about Chinese troops flooding into Syria. The first version of the story I saw was on a news aggregator called AWDnews, which gave (without an actual link) the source as another aggregator of stories, EU Times, which gave as its source the actual source, Sorcha Faal of whatdoesitmean.com 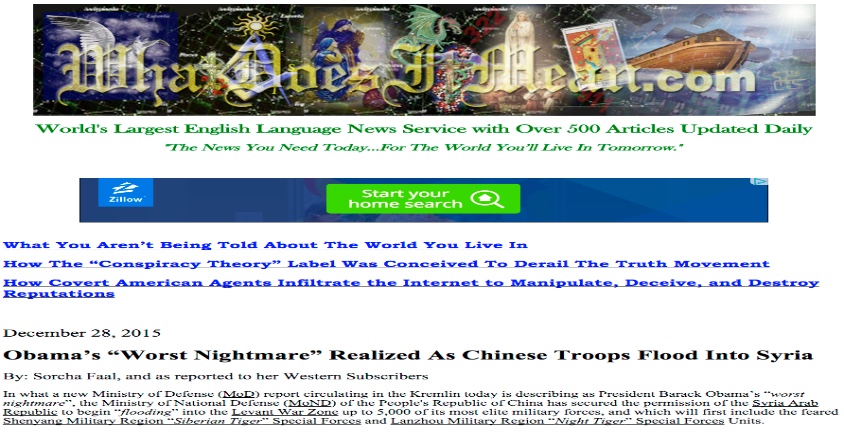 ​
Sorcha Faal, is described by Rational Wiki as:
http://rationalwiki.org/wiki/Sorcha_Faal

Sorcha Faal is the alleged author of an ongoing series of "reports" published at WhatDoesItMean.com, whose work is of such quality that even other conspiracy nutters don't think much of it. There is a high chance that "Sorcha Faal" is actually David Booth, the owner/operator of the website, or someone collaborating with him.

Each report resembles a news story in its style, but usually includes a sensational headline barely related to reality (e.g. "American Rebel Forces Attack Gas Pipelines, Explode Trains As US Civil War Nears"[8]) and quotes authoritative high-level Russian sources (such as the Russian Federal Security Service in the same article) to support its most outrageous claims. Except for the stuff attributed to unverifiable sources, the reports don't contain much original material. They are usually based on various news items from the mainstream media and/or whatever the clogosphere is currently hyperventilating about, with each item shoehorned into the conspiracy narrative the report is trying to establish. Cited sources range from the mainstream media and Wikipedia to Infowars and Richard Hoagland. The author also has the habit of adding unnecessary links to the websites of the various Russian institutions they mention.

So basically Sorcha Faal has a long history of creating fake news stories, to the extend that Sorcha Faal stories are derided even on Conspiracy friendly sites like Above Top Secret. Invariably it's some prediction based on secret sources Sorcha supposedly has in the Kremlin. And invariably it does not come true. And this has been going on for ten years. So terribly wrong are the SF predictions, that some consipracy sites suspect it must be a deliberate misinformation campaign by a "Zionist disinfo team" designed to confuse conspiracy theorists
http://educate-yourself.org/cn/sorchafaaldisinfo15mar08.shtml


I continue to get mail from internet readers who come across my article Sorcha Faal: Light Bringer or Faallen Angel? which I posted to the net on September 17, 2006, (see: http://www.radicalpress.com/?p=180 ). At that time I had come to the conclusion that this person was blowing smoke in the ears of internet readers and thus I critiqued one of the more outrageous pieces that had then recently come across my screen.

Since that time I still find certain sites who continue to publish these ongoing hoaxes. I have tried to convince them that all they are doing is spreading more disinformation but beyond offering my two cents worth I cannot do more than rely upon their own good judgment to figure out how they are being scammed and, inadvertently, scammming others.
...
Personally, as I stated in my original critique of this writer, I think they are part of the Zionist disinfo team that pumps out misinformation and confusing constructs as part of the overall agenda of "DECEPTION" which is the hallmark of Zionism¹s modus operandi.

Here is one of the earlier Sorcha Faal pages, from 2005. Spouting what is quite obviously nonsense that did not happen:
https://web.archive.org/web/20050429004736/http://www.whatdoesitmean.com/ 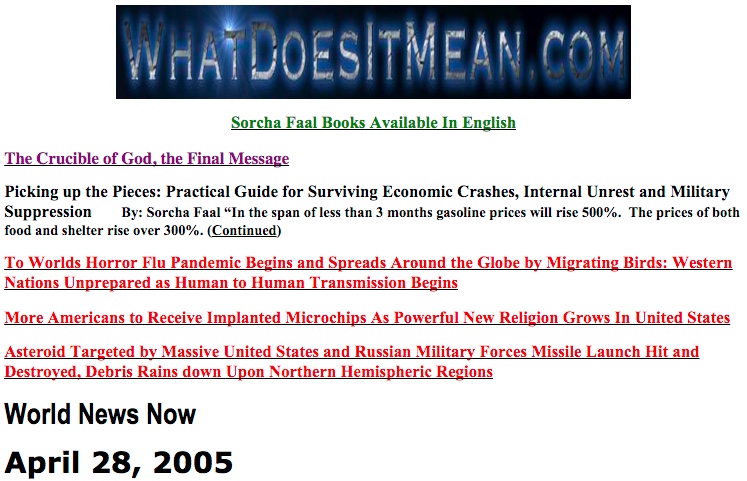 ​
Unfortunately the modern trend of repeating news stories and the proliferation of fake clickbait news sites makes it difficult to quickly see the actual source of a news story, allowing nonsense like this to spread quickly on social media.
Last edited: Dec 29, 2015

sigh...I thought we had moved on from even needing to address Sorcha (Such-a-Fail) Faal stories...its been years since he/she/it has been able to get any real traction...is the internet immune to learning?

Staff member
I don't think this one got a huge amount of traction, but a relative of mine shared the story, which was unusual. So I though I'd try to nip it in the bud.

Mick West said:
I don't think this one got a huge amount of traction, but a relative of mine shared the story, which was unusual. So I though I'd try to nip it in the bud.
Click to expand...

This seems to be another example of "click-on-me" type headline grabbers, with untruth to follow.
China in Syria ?
People still do fall (Faal) for it.
Last edited: Dec 29, 2015

Re: Is the internet immune to learning?

I think P.T. Barnum (or someone) had something to say about that. Maybe there's a corollary for the digital age, something like "A sucker gets online every minute."

You would think Sorcha Faal would change his/her/its name by now. Why oh why does anyone create stories like this? This is horrid.
You must log in or register to reply here.