Staff member
Source: https://www.youtube.com/watch?v=nael3k1LWSc
The above video is just one of literally thousands of videos from space. A variety of the more extreme conspiracy theorist think that all footage from space (which in the last few years has almost all been from the International Space Station) is fake. They point to films like Gravity and the existence of zero-gravity planes as evidence how these things can be simulated.

Live video video like the one above (Rick Mastracchio and Steve Swanson live chatting with students at Boise State University in Idaho) is more problematic. The video clearly shows the astronauts in zero gravity for an extended period of time, with floating objects and people. How could this be faked?

The belief that something is fake leads people to postulate the most bizarre suggestions. In this case the theory is that the astronauts are suspended from the ceiling with invisible wires, and the floating objects (a ball, the microphone, and a baseball cap) are not actually there, but are 3D computer graphics added to the scene via some kind of augmented reality. The astronauts can supposedly interact with these object because they are wearing special contact lenses that allow them to see the virtual objects, and there's some computers tracking their hands. See this video for more details.

There's a number of problems with this theory. Firstly the idea that they are suspended from wires. At 11:00 into the video Steve Swanson performs a twirl followed by a backflip

In order to simulate zero G with wires, the person would need to be supported from multiple different points. 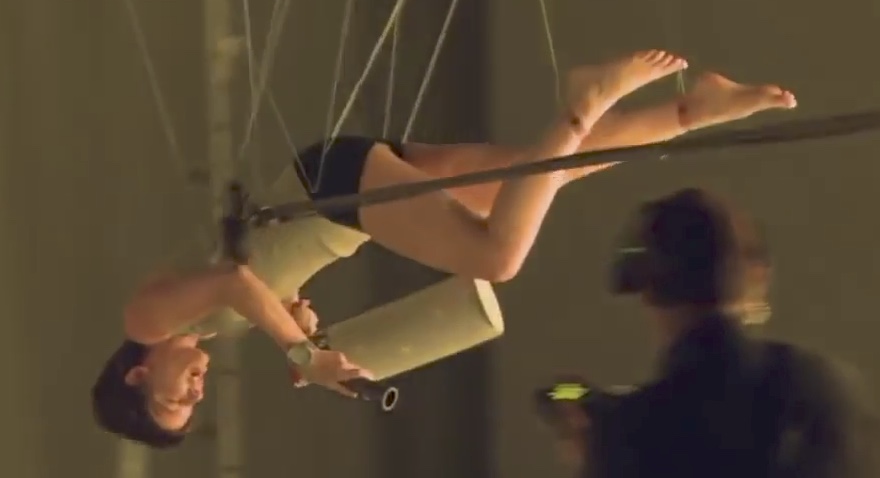 This would make it impossible to do the maneuver that Swanson does.

The idea of augmented reality is theoretically possible, but would require a level of technology far in advance of what is known to exist today. In particular VR contact lenses - we don't even have huge VR headsets that are capable of doing this, let along contact lenses. However super-advanced secret technology has always been one of those impossible-to-disprove things. So let's look at the actual evidence that these things are being used:

At 18:10 in the video, Rick Mastracchio reaches takes his hand off the grab bar, starts to clasp his hands together, then stops and puts his hand back on the grab bar.

The suggestion is that he is attempting to manipulate a virtual reality 3D object that somehow is not showing up in the video. The problem with that is the hand movements he makes are identical to the movements he makes through the entire video. He's constantly reaching for the grab bar, folding his hands, entwining his fingers etc. Here's a compilation of all these movements. All the conspiracy theorists did was take one that looks a little odd out of context.

Another claim is based on the video at 12:00 where an astronaut is seen propelling himself along the passage behind them.

There's some kind of strap on the back of his pants, and the suggestion is that this is part of a harness. A problem here is that's it's not taut, it's just sticking out there.

However, loose straps are a common feature on the ISS. Velcro straps are commonly used to fix things, and the astronauts have special pants with strips of velcro on them. There are several such things it could be, but in this case it looks like it's the strap on a bag, seen in this video.

The thing strapped to his leg is not part of a harness either. It's a clipboard. Seen in this video, and also with a loose black strap. 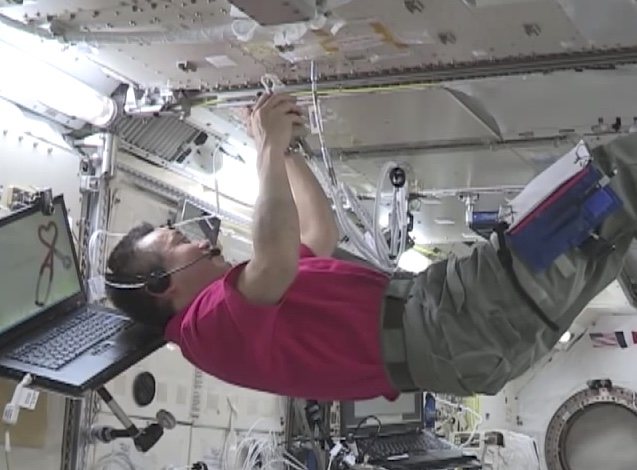 With this particular theory I think the best antidote is to look at he videos that show extended walkthroughs of the station, with astronauts performing motions that are impossible to simulate in normal gravity, and too long (and it too large a space) to be done on a plane. Here a great example:
Source: https://youtu.be/bhGydridbEA?t=1m53s

Or this high speed tour of the entire station:
Source: https://www.youtube.com/watch?v=AxX_DvzJMZM
At 3:50 Gregory Wiseman floats the entire 350 foot length in one take.

There are also other live chats where the astronauts perform even more varied maneuvers, even more impossible to do live with wires.
Source: https://www.youtube.com/watch?v=8fWfErpNX90
Last edited: May 18, 2017

I'd like to see them try to explain away the video of Chris Hadfield wringing out a washcloth on the ISS: Source: https://www.youtube.com/watch?v=lMtXfwk7PXg

Staff member
There's a lot of this type of thing (there's more in the linked video) . I don't think it's really worth putting each one in a separate thread at this point. But if you'd like to do a very quick debunk of any point, then just add it here.

For example, at 1:02 Samantha Cristoforetti is shown reaching for a toy that appears into view with the "teleporter" effect. 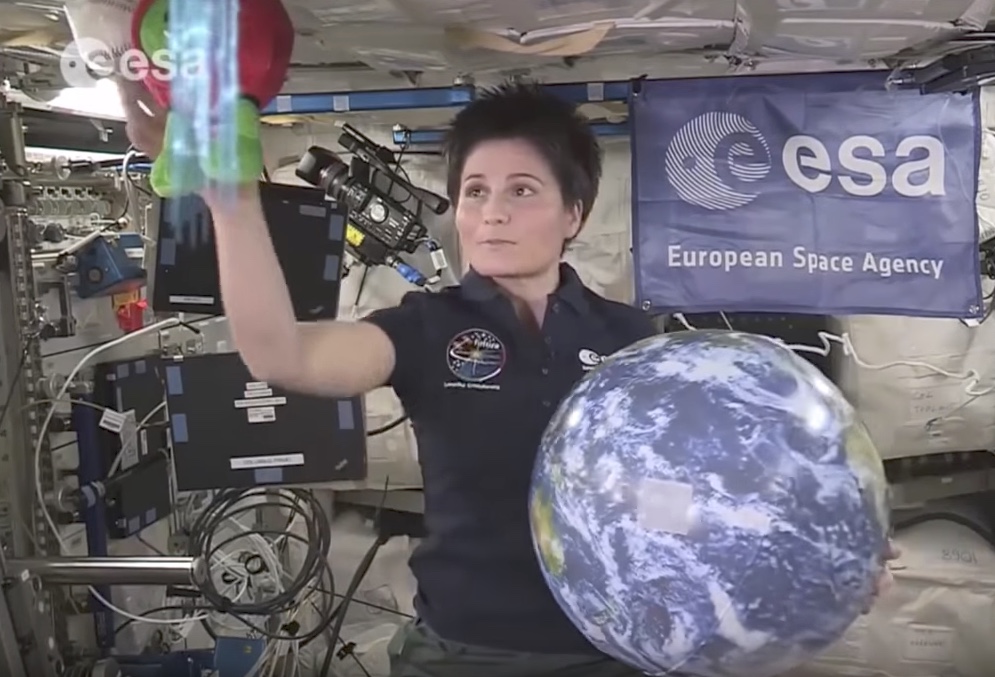 Sargent says that the only way this could be done is with virtual reality, and rag-doll physics (basically physics that simulates loosely articulated structures, like rag dolls, or plush toys - a bit of an fashioned term)


But far from needed advanced virtual reality, all that is needed is a very tiny bit of video editing. You simply mask off the region with the toy using the video without the toy, then simply fade from one to another adding the effect. It's a trivial bit of work using after effects. This isn't a live video, so was just edited afterwards to appeal to children.

(Aside: I don't really see the point of such effects, as floating in zero gravity is amazing enough for me.)

Staff member
And to show the "appearing object" effect is easy, I very quickly did something similar in After Effects: 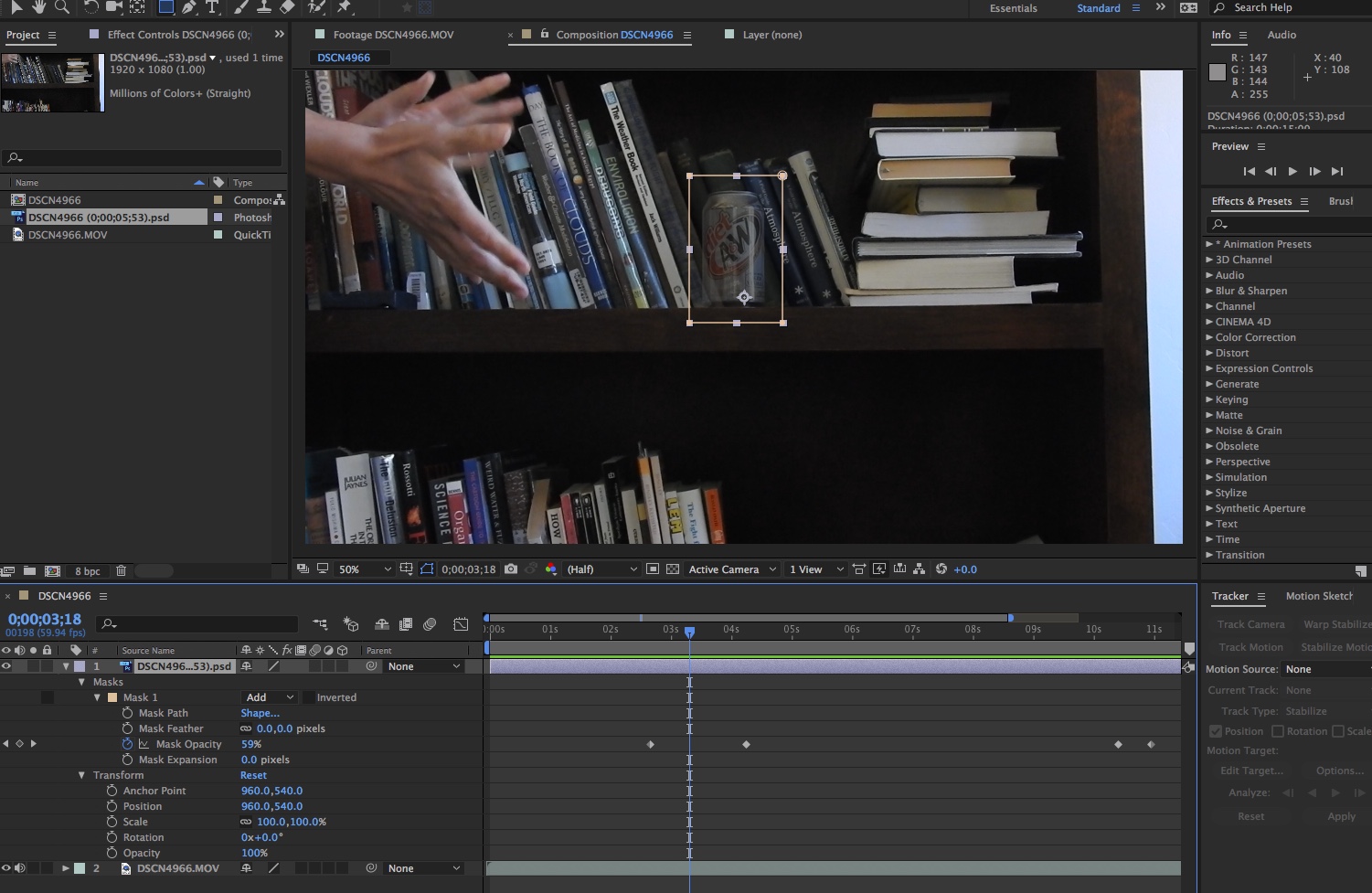 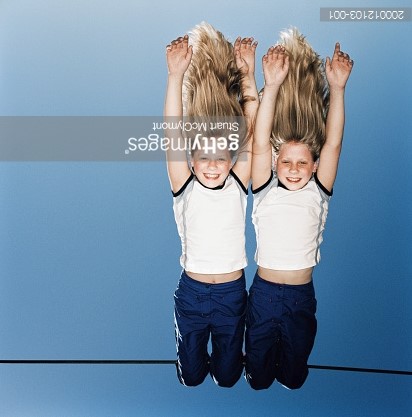 edit add: sigh, she uses a fake name now on FB and I cant remember it but here's a guy saying the same. 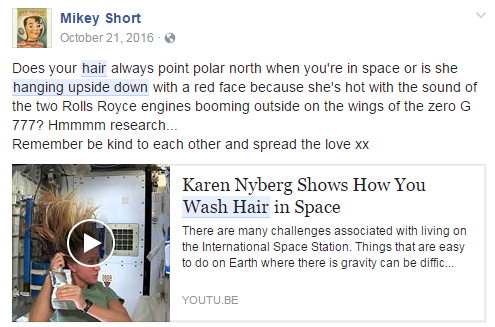 Amber Robot said:
Well, is she hanging upside down or is she on the zero G 777
Click to expand...

lol I didn't even catch that.


On Earth, blood pools in the feet. When people stand, the blood pressure in their feet can be high -- about 200 mmHg (millimeters of mercury). In the brain, though, it's only 60 to 80 mmHg. In space, where the familiar pull of gravity is missing, the head-to-toe gradient vanishes. Blood pressure equalizes and becomes about 100 mmHg throughout the body. That's why astronauts can look odd: their faces, filled with fluid, puff up, and their legs, which can lose about a liter of fluid each, thin out.

Reportedly it's an uncomfortable sensation, much like the congested feeling you get from hanging upside down.
Last edited: May 20, 2017

Hi everyone, since I really didn't want to start a new thread, I'll just do what Mick said.


Mick West said:
I don't think it's really worth putting each one in a separate thread at this point. But if you'd like to do a very quick debunk of any point, then just add it here.
Click to expand...

So...
I found this video about the "Top 10 reasons I don't trust NASA"
and In summary, it's just a compilation of the average Flat-earther/conspiracy theorist claims that supposedly are "proof" that NASA is "fake" and they are "suppressing the truth". The points made in the video are really easy to debunk, except for some of the parts of the last one.

It consists of 4 clips taken from the ISS videos, in which supposedly there's evidence of the use of some kind of invisible wires attached to the astronauts clothing.

The only plausible explanation I came up with, is that this effect is just the result of a combination of movements that makes the whole scene look like if the astronaut in the lower right corner is grabbing this "invisible wire", but in fact, he is just following the movement of his companion while he is grabbing on to something,

Here is the video in question:

I would love if you could give me some feedback

PD: I hope I was able to make myself understood, This is my first post
PDD: I apologize if I accidentally broke a guideline, I'm still learning them
Last edited: Sep 2, 2017

in the top clip it is easier to see see he ultimately grabs the microphone wire. Looks to me like he is trying to help the guy balance back into a normal position.

add: as far as the pants, that's just what pants do. which is why most women don't wear that style of pants. 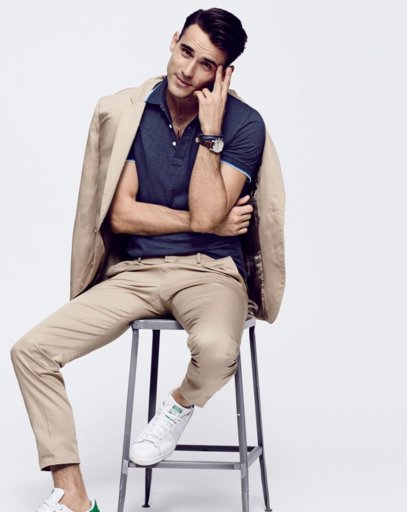 The only plausible explanation I came up with, is that this effect is just the result of a combination of movements that makes the whole scene look like if the astronaut in the lower right corner is grabbing this "invisible wire", but in fact, he is just following the movement of his companion while he is grabbing on to something,
Click to expand...

He's not "grabbing" anything. USMC guy's little finger gets caught in backflip guy's pants pocket. The microphone wire is just in front of this.

Here, let me take my pants off and put them round a backpack to demonstrate:

Source: https://giphy.com/gifs/l1J9OhgSNXm9bs3u0/html5
You must log in or register to reply here.