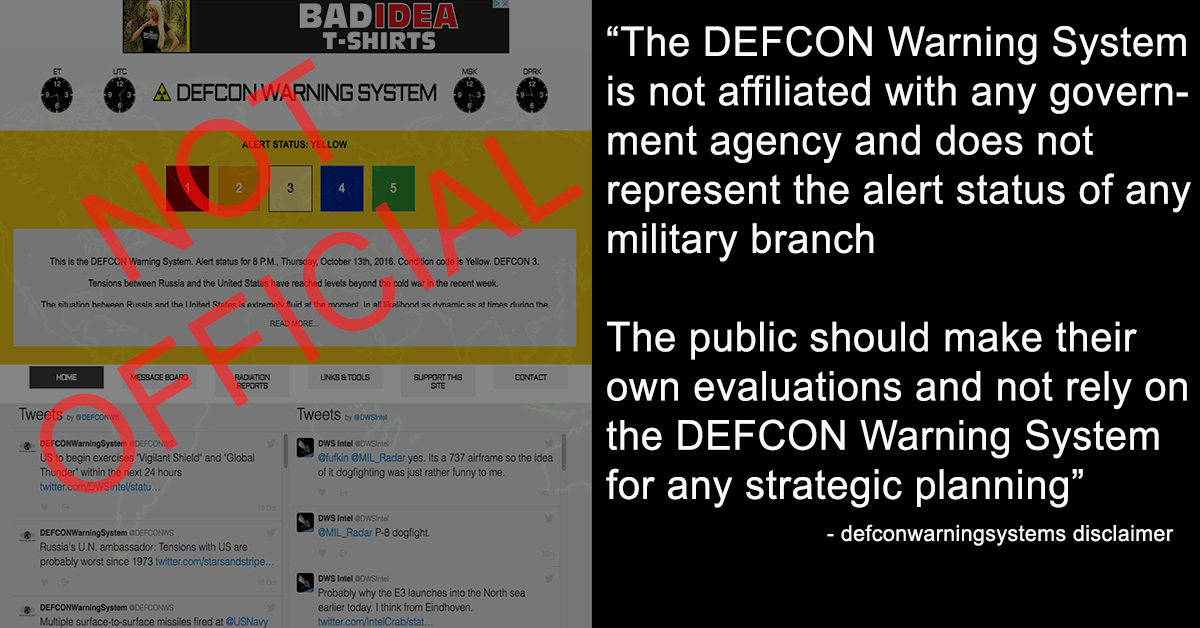 Several media outlet, mostly UK tabloids and US conservative news aggregators have reported that the US military has raised the US "DEFCON" alert level from 4 to 3 because of tensions with Russia. However there is no evidence that this is so. The last time the DEFCON readiness level was at 3 was during the 9/11 attacks of 2001.

The claim that is being repeated here is simply the opinion of one hobbyist web site, defconwarningsystem.com, run by a small group of people who are interested in prepping for a nuclear war. They like to analyze world events, and they run personal radiation monitoring stations. Their guess of the defcon level is just that, a guess. Probably influenced by their fascination by nuclear war.

They make no claims otherwise, and in fact have a disclaimer


The DEFCON Warning System is an analytical reporting organisation which focuses on nuclear threats against the US and offers an alert code to the public based on current events It is not affiliated with any government agency and does not represent the alert status of any military branch. The public should make their own evaluations and not rely on the DEFCON Warning System for any strategic planning. At all times, citizens are urged to learn what steps to take in the event of a nuclear attack.

Based on postings on the message board and their contact information, it appears to be administered by "Thomas Lonely Wolf" a writer in Washington State, and Ryan Barenklau, a student at Texas A&M. Neither seem to have any expertise in the topic other than a shared interest in predicting nuclear war.

However this has not prevented crazy news headlines in the British tabloids: 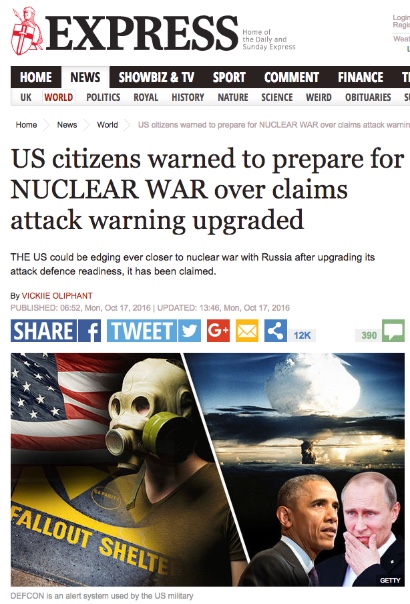 ​
This is not entirely the fault of DWS, who are giving their opinion on the current geopolitical situation. They even make some valid observations about the situation. However they are misleading people by not making it clear from the outset that they are not actually reflecting the official military readiness. Their disclaimers are hidden at the bottom of the page, or in a wall of text. It's very easy for fearmongering sites like the Express to pass is off as something more than it actually is, just the opinion of some guys interested in nuclear war prepping.

[Update Oct 20th, 2016]. As a result of the increase popularity of the site, Ryan Barenklau left to start his own site, meaning DWS is now basically a one-man operation]
Last edited: Oct 20, 2016

So this is basically the same as the "Doomsday Clock" but using DEFCON instead of minutes and seconds to midnight.

Svartbjørn said:
So this is basically the same as the "Doomsday Clock" but using DEFCON instead of minutes and seconds to midnight.
Click to expand...

Except the Doomsday clock is run by actual worldwide organization of experts with an actual academic journal, the Bulletin of the Atomic Scientists.
http://thebulletin.org/doomsday-dashboard

Svartbjørn said:
So this is basically the same as the "Doomsday Clock" but using DEFCON instead of minutes and seconds to midnight.
Click to expand...

Maybe more like when @mamasstickygaloshes2003 posts his
"real" list of new enshrinees to the Rock 'n Roll Hall of Fame...

I've spent way more time reading over their stuff than I really should have, but a few things I noted that seem to be amateurish to me:

1. They worry a lot about posturing moves, especially by Russia. For example, the upcoming transit of a small Russian fleet through the English Channel, and several NATO members' plan to escort them through. While this happening in the English Channel is new, the event itself has decades of precedent, and the only chance of escalation is a severe breach of rules of engagement. Our ships have gotten close enough to wiggle their eyebrows at each other tons of times (occasionally even close enough to scrape the paint a few) and utterly fail to start a war.
2. Every regional conflict is the prelude to world war. Now, for Syria there's an outside chance of that, with major powers acting in support of two different factions, and alliance members on both sides not all on the same page about the matter (example: Turkey), but they also talked about the attacks on US ships near Yemen, which doesn't involve complex conflicting foreign intervention. If the US retaliated in full force in Yemen, the worst case scenario would be an Iraq-style prolonged occupation, not WWIII.
3. They fall for the media trap of every crazy member of a government speaking with the full faith of that government. For example, one of the stories they seem to reference in the alert increase is the story advising Russians to return home and prepare for nuclear war if the US elects Hillary Clinton. This is the equivalent of taking Mark Walker's "laser or blitz" promise as an actual declaration of war on Mexico - both are just random members of the legislature who say crazy things sometimes, but don't actually have the support to deliver.


I don't think they're pushing an agenda, per-se, like a lot of sites like this are. They seem to be trying to be the Doomsday Clock with a different framing mechanism, but their misconceptions cloud their objectivity.
Last edited: Oct 19, 2016

Hevach said:
I don't think they're pushing an agenda, per-se, like a lot of sites like this are. They seem to be trying to be the Doomsday Clock with a different framing mechanism, but their misconceptions cloud their objectivity.
Click to expand...

They do have a shop and a donate button though.

They're certainly trying to make a buck, but by agenda I mean like Deagle.com's absurdity is clearly meant to promote an anti-globalism/SHTF ideology. DWS reads like somebody who watches a lot of news but expects the global political scene to work like a giant game of Civ.

Staff member
The recent surge in interest in the site has led to a bit of a schism, one Admin (Ryan) has left and taken most of the members of the discussion forum with him and set up a new site.
https://strategicsentinel.org/phpbb3/

The following email was sent out to forum members explaining the change, and posted on the DWS site:
http://www.defconwarningsystem.com/phpBB3/viewtopic.php?p=64742#p64742

Dear User,
This is the Deputy Director of DEFCON Warning System Ryan. I began working
at the DEFCON Warning System in early 2011 when the organization was just
starting to find its footing on web. That was 5 years ago and what you see
before you is, in large part due to me and subsequently the staff once they
came on. I love this organization like it’s my own, because I feel like it
is, and so does the large majority of our users.

Thomas Lonely Wolf is the director of the DEFCON Warning System. He founded
it in the late 80s and our first website went live in 2010. Since my first
month on the job, Tom has always been one to hide in the shadows allowing
me to run day to day operations while he remained the sole person who could
change the level. This was a fine deal until we started getting popular. We
are now getting millions of hits on Twitter and the website. We are more of
an actual business than anything else. You would think Tom would love this
popularity especially when people like Steve Herman from Voice of America
and Peter Cook from the Pentagon take what we say very seriously. In fact,
though, Tom has become even more like an absentee land lord. Tom still
retains sole control over the level and this creates a problem since he
does not take the regular staff meetings seriously. Tom lives in his own
bubble where what he believes is happening in the world is the truth, and
will not listen to any kind of information we have that goes against what
he believes. The staff and I put in very long and hard hours doing what we
love while he is nowhere to be found regular. He is never in the TeamSpeak
helping to gather information, and he is overall, unappreciative to the
amount of work that is done by all the contributors. Tom is also taking
DEFCON Warning System on a path towards less factual publications and more
opinionated pieces and is leaning towards a conspiracy nature. The staff
will not be a part of a future such as that.

Therefore, it is with heavy hearts that the entire Staff and I have
unanimously decided to leave DEFCON Warning System and found our own
company, Strategic Sentinel. The new company will be made up of the same
staff that built DEFCON Warning System as you see today, but we will no
longer be restricted under Tom, nor only focusing on nuclear threats
against the United States. This new company will focus on all aspects of
geopolitics to bring a clearer picture to our followers. We will still have
everything we do at the DEFCON Warning System like the message board and
TeamSpeak. The only thing we will leave behind is a numbered alert. We are
only expanding our horizons. We will write more articles, conduct more
research, and have a more open chain of command. We will be focused on
bringing the best quality media to our followers and to compete with other
organizations who may try to sensationalize news. Our goal is to grow and
be respected in our community.

You brought us here. Without you, we would not be as popular as we are now.
We would not be taken as seriously as we are by important people.
Therefore, you should have a say in how this new company is to be operated.
I encourage you to send me your comments and opinions.

Thank you for being so crucial to getting us to the point we are at today.
I hope you can join us on this newest adventure.

Link to the new message board:
https://strategicsentinel.org/phpbb3/

We have identified the individual involved and reported him to the proper authorities.

At this time, we have repaired the damage done and recovered our stolen account.

Please accept our deepest apologies for any inconvenience this person's actions have caused. We never want you to lose the trust you have given us, and we will work our hardest to restore it.

Rest assured, we will continue to report and analyze world events and bring to you the information you need to know to prepare in the event of nuclear war.

Thank you for your time and trust. As always, we invite constructive feedback so we can do a better job.

And currently their alert status is 4, down from 3.
You must log in or register to reply here.