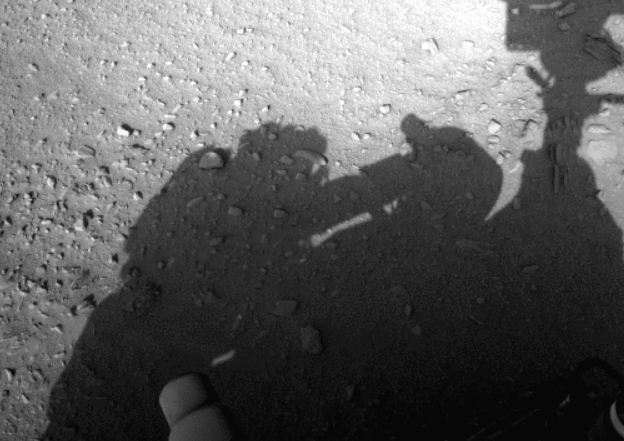 Metro doesn't give a source, but some searching traces it back this page:
http://www.ufo-blogger.com/2012/09/who-is-cleaning-nasa-mars-rover.html

No evidence except a series of shadow pictures like the one above, leading to this conclusion:


1. NASA had sent secret maned mission to mars along with curiosity. And while one of the astronaut cleaning the rover his/ her shadow caught on camera.
or
2. NASA Mars rover Curiosity never went to mars but operating from some where in Atacama desert in chile.

And then buried waaaaay down the page

3. Its just a shadow illusion.


This one's actually pretty easy: The shadow is (mostly) that of the rover's arm in its retracted position, illustrated here in a picture of the arm before installation: 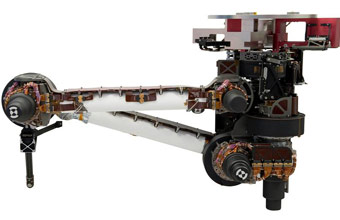 The hand, or tool, is the elbow joint of the rover, with the arm being the top length. You can also see the lower section outlined by the gap letting sunlight through between them - the gap appears more straight than triangular because the arms are spaced horizontally, designed to swing past each other, so the side profile minimizes the gap while sunlight shining mostly down would emphasize it. The "astronaut"'s head is the rover's tool platform, you can see the openings in the shadow, forming the "visor." 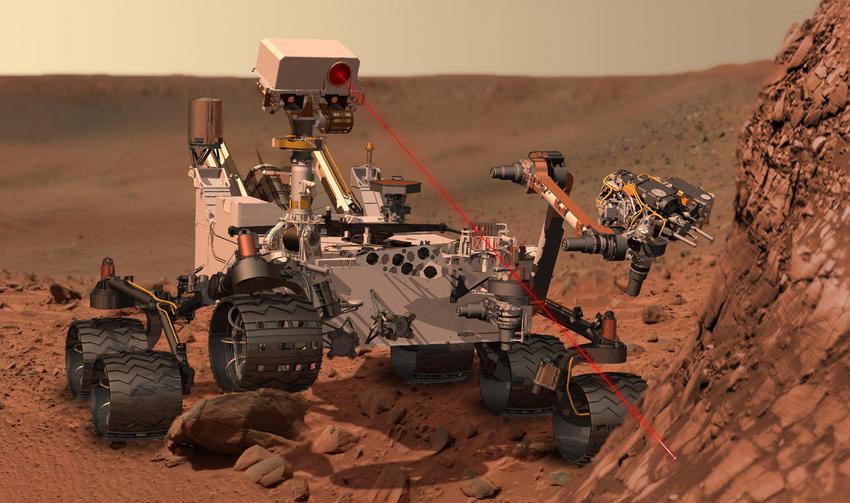 A related claim on the ufo-blogger page is this:

Back in 2009 MSNBC had reported, "Somebody has been regularly cleaning the Mars rover Opportunity" Read More

Actually clicking Read More brings an explanation that, in 2009, Opportunity was much cleaner than its twin Spirit, despite having spent the same amount of time on the planet. However, it explains it as

probably nothing much more mysterious than a few well-timed gusts of wind,"

Mars, being entirely dry (water can exist as ice in some conditions but most liquids want very much to be in any state except liquid) doesn't have "sticky" dust, it is quite easy to clear off of flat surfaces like solar panels, except that we have nobody there to do it and past rovers had no tools to do it themselves. It has been proposed that something as simple as a small electric fan could solve problems that Spirit and Sojurner experienced with dust covering solar panels, but has not been done.

Curiosity does not have this problem at all, since it's powered by radioisotope thermoelectric generators and has no solar panels.
Last edited by a moderator: Jan 25, 2015

If a computer model of the rover is available, then playing with the lighting and view points in a 3d program might reproduce the effect.

I've been trying to find a good Kerbal Space Program model for one, since it would just be a matter of fiddling with the angle and timewarping to the right time of day, but nothing I've found has an accurate and working robotic arm.

Am trying to find a record of ANY launch capable of sending a spacecraft FROM Earth...(using Earth's rotational velocity near the Equator in order to provide an "assist") that was somehow "missed"....by EVERYONE???

One that EVEN with the rotational energy 'boost" near Earth's equator....would STILL need to accelerate (in some way)....to achieve an orbit HIGHER(**) than Earth's current orbit, relative to Sol. This would NOT be "invisible", folks. MANY amateur sky-watchers alone can "de-bunk" this as a 'premise'.

Unless of course it used a "warp-drive"....in which case the Vulcans will soon be landing....

i kinda hate to see this debunked as working on Mars without a helmet is very sexy indeed!

could it be this at a different (twisted) angle?

Yep, that's the exact part I was talking about. It's a rotating drum with various instruments at the end of the robotic arm. When it's in the retracted position, it's turned vertically like the pre-assembly image shows.

Staff member
The only reason this bit of pareidolia got triggered is because that one long stone looks a bit like a visor.
Last edited: Jan 25, 2015

Sheesh! This 'anomaly' is from 2012. Bit slow on the uptake, these conspiracy folks!

Sagittarius said:
Sheesh! This 'anomaly' is from 2012. Bit slow on the uptake, these conspiracy folks!
Click to expand...

May be the guy 'had to order the parts,' and the delivery was fouled up

Sagittarius said:
Sheesh! This 'anomaly' is from 2012. Bit slow on the uptake, these conspiracy folks!
Click to expand...

NASA dumps a lot of images on the web, usually anything that's not making current headlines (like the two Rosetta debunk threads a couple months ago), they sift through at leisure. Combined with spending more time staring at pictures of rocks than hardcore geologists can muster professional enthusiasm for, it makes it basically impossible to keep up.

Also, I think at least some of them intentionally use old pictures, because they like to say, "It's been right under NASA's nose for years," and so forth.
I

Mars astronaut with no helmet...

Think about that for a moment.

Think about that for a moment.

Holy cow, you're right! Breathable Martian air is going to make colonizing the place a breeze!

Douglas "Arnie" Quaid was there.

Trailspotter said:
Douglas "Arnie" Quaid was there.
Click to expand...

nah. his upper body is too small. i think, since he's got a jetpack and no helmet, its the jetpack turtle dude from the Bird on Mars thread! 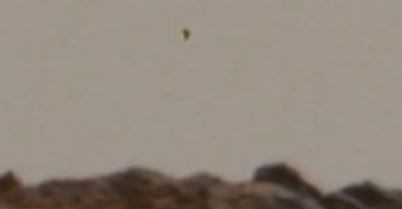 deirdre said:
nah. his upper body is too small. i think, since he's got a jetpack and no helmet, its the jetpack turtle dude from the Bird on Mars thread!
Click to expand...

I meant not the shadow but breathable Martial air. Arnie did it!

Sadly this reincarnation from the old mold photos files, and previously explained/debunked has resurfaced to now somewhat disturbing main stream media Huffington Post (if you can callit that?). The real pity is that it sends folks to Scott Warrings' Pereidolia Daily web page. Do not be surprised as others will beging to see faces everywhere!
You must log in or register to reply here.