Carnicom's article "Contradictions": http://www.carnicominstitute.org/articles/contra1.htm is about a case of "chemtrail spraying" above Santa Fe, New Mexico, USA. It states that

In Albuquerque, at flight level, immediately visible to the south:

U.S. Naval Postgraduate School in Monterey CA and Vincent Schaefer, inventor of cloud seeding in 1946, both affirm that cloud formation is not expected to even begin below relative humidities of 70%. That case itself is considered unusual, exemplified with the introduction of hygroscopic nuclei, such as salts in the atmosphere along the coast. Persistent contrails stated by numerous sources to have the potential to exist only in conditions of near saturation to saturation.
Click to expand...

These numbers are correct, but the are two questions:

1. What are real atm. conditions at 10:30 LT? They can change a lot between radiosonde launches.

2. The accuracy of radiosonde data is also questionable: https://www.metabunk.org/threads/75...de-humidity-soundings-for-contrail-prediction. 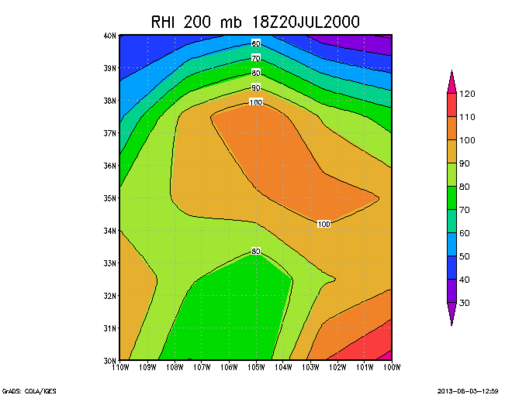 ​
We see a region above Santa Fe which is very close to ice saturation. So there's no contradiction.
Last edited by a moderator: Nov 20, 2013
You must log in or register to reply here.