Debunked: Chang'e-2 photos of Alien Base on Moon [Hoax]

Watching video about ufo on nasa Apollo landing now I knew of some stuff like landing was staged "supposedly" but why what happen.? The video about secret moon base actual NASA documents. Why hasn't NASA been back on foot which is strange.... Help me someone http://www.conspiracyclub.co/2015/05/05/moon-alien-base-china-releases-image/

The photo below is similar to many that I myself have seen. It appears that the Chinese who took the photo, have confirmed that aliens exist. The Chinese have probably been in contact with these aliens already. 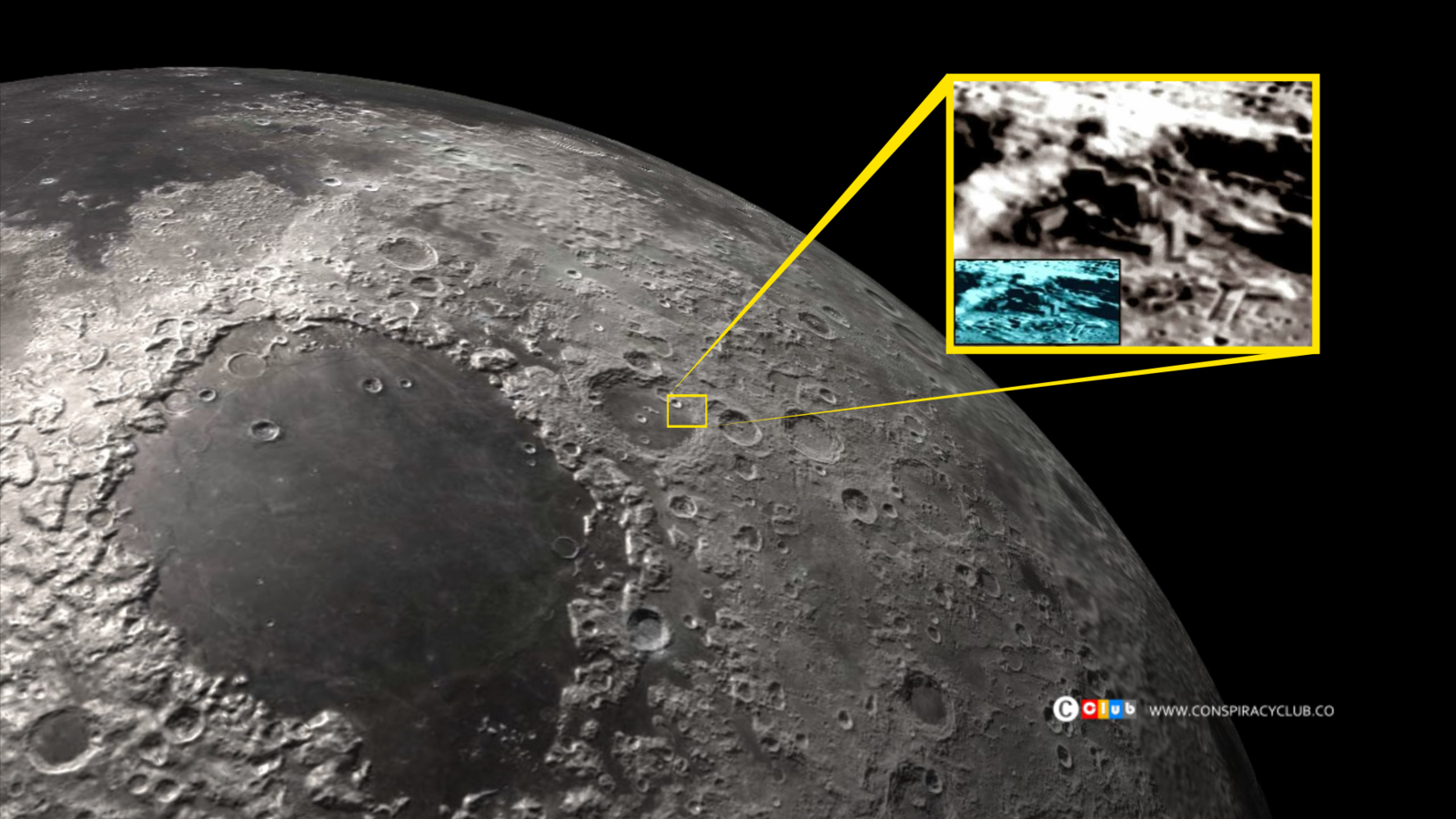 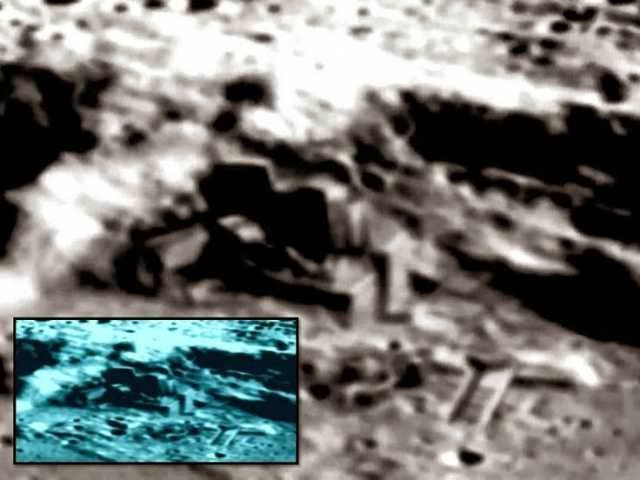 “I was sent some pictures by a source who claims China will be releasing Hi Res images taken by the Chang’e-2 moon orbiter, which clearly show buildings and structures on the moons surface. He also claims NASA has deliberately bombed important areas of the Moon in an effort to destroy ancient artefacts and facility’s.
“Pictures yet to be released clearly show nuclear impact craters and building debris caused by explosions in an effort by NASA to destroy the truth. China is moving toward full disclosure of the Extraterrestrial reality, if these images and future ones are verified genuine then NASA should be investigated for fraud and treason. China will be releasing all the data and images from the Chang’e-2 in the coming weeks and months, lets hope this is the beginning of a new era.”

According to the NASA Astronaut Neil Armstrong the aliens have a base on the Moon and told us in no uncertain terms to get off and stay off the Moon!

Sound far fetched? Milton Cooper, a Naval Intelligence Officer tells us that not only does the Alien Moon Base exist but the U.S. Naval Intelligence Community refers to the Alien Moon Base as “Luna,” that there is a huge mining operation going on there, and that is where the aliens keep their huge mother ships while the trips to Earth are made in smaller “flying saucers”.

LUNA: The Alien base on the far side of the Moon. It was seen and filmed by the Apollo astronauts. A base, a mining operation using very large machines, and the very large alien craft described in sighting reports as mother ships exist there. – Milton Cooper

Content from external source
Last edited by a moderator: May 5, 2015

I've edited your post to include the claims and what little evidence they provide for them. When you make a thread you should always include all the information you can.
But this is really just someone saying something and not really offering much reason to believe them.
I would avoid that site and others like it as they don't even put much effort into offering evidence, they just are interested in getting traffic.

The photo's a little bit interesting, but digital artifacts should be the first thing that is ruled out before jumping to conlcusions like these.
Last edited: May 5, 2015

Staff member
The image is not a picture from the Chinese orbiter at all. It is an edited version of a photo from NASA's Lunar Orbiter 3, taken in February 1967! 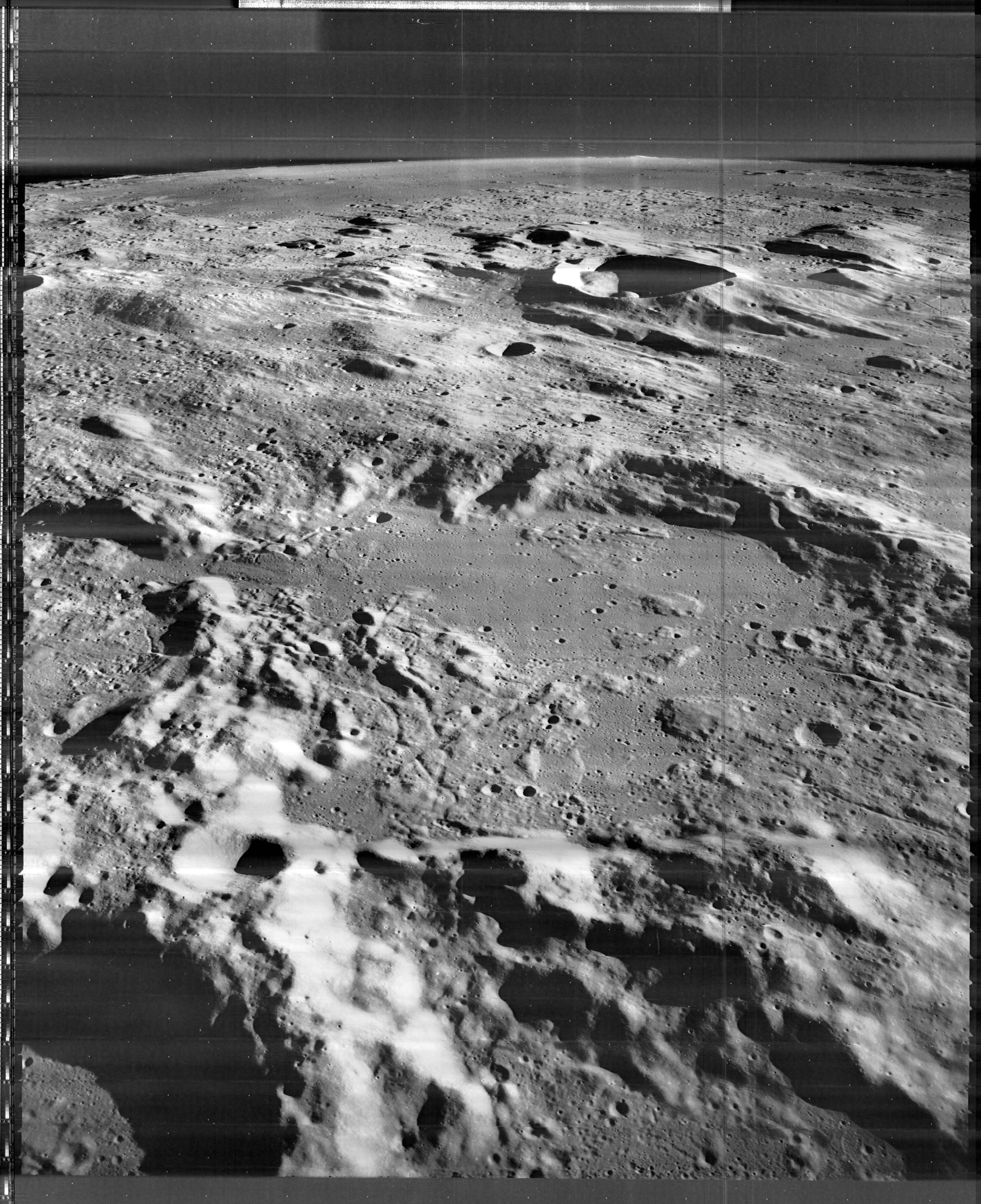 The area in question is at the back right of the prominent flat plain in the centre, close to where the vertical stitching artifact crosses it. 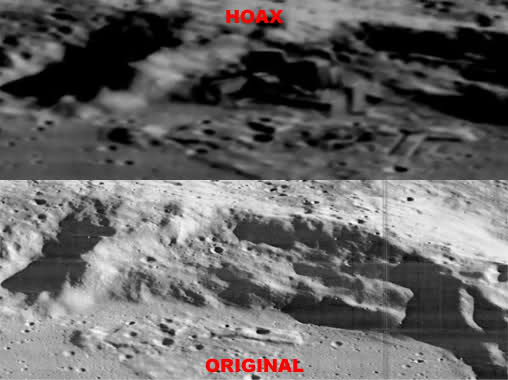 The field of view in those two comparison shots isn't a very good match. I'm sure someone here could knock up a better overlay comparison, but I don't have time right now.
Last edited: May 5, 2015

Tony_Sigel said:
Why hasn't NASA been back on foot which is strange....
Click to expand...

Not strange at all really: It is very very expensive.

After Apollo finished with Apollo 17, the US government felt they had achieved their aim in beating the Soviets to the moon. Pairs of Astronauts rummaging around for moon rocks did not really achieve very much after the first couple of times except to capture the imagination. The risks of these missions was also incredibly high so perhaps they thought to quit while they were ahead.

Skylab was next, and was considerably cheaper and lower risk, followed by the Space Shuttle. The Space Shuttle was intended to be a cost effective method of space exploration and was commercialised to launch satellites. It didn't quite turn out to be commercially viable, but relatively reliable.

Its pretty much all a matter of funding, political motivation and risk.

Staff member
It's an exact match for the older image, just a bit of blur and contrast, and then the structures added digitally.

The story has been kicking around various sites for a while (since Feb 2012), some attribute it to "The Canadian", which is actually just a news aggregator site that anyone can "publish" on:
http://www.agoracosmopolitan.com/news/ufo_extraterrestrials/2012/02/23/3060.html

"I was sent some pictures by a source who claims China will be releasing Hi Res images taken by the Chang'e-2 moon orbiter, which clearly show buildings and structures on the moons surface. He also claims NASA has deliberately bombed important areas of the Moon in an effort to destroy ancient artefacts and facility's. Pictures yet to be released clearly show nuclear impact craters and building debris caused by explosions in an effort by NASA to destroy the truth. China is moving toward full disclosure of the Extraterrestrial reality, if these images and future ones are verified genuine then NASA should be investigated for fraud and treason. China will be releasing all the data and images from the Chang'e-2 in the coming weeks and months, lets hope this is the beginning of a new era."

Content from external source
This particular "The Canadian" story was "compiled" by Scott Waring, and, as seen above it uses as a source Scott Waring, and the link now redirects to his site "UFO Sightings Daily"
http://www.ufosightingsdaily.com/2012/02/alien-moon-base-captured-by-change-2.html

Which in turn references a video by "Alien Disclosure Group (UK)",

There is no "report", the quoted text is just from the description of the YouTube video, which was later updated to also say:

UPDATE: Please compare moon image with the image URL below, does this prove the image I posted is a fake, disinfo, or is it proof that NASA has indeed airbrushed important structures out of its published photographs of the lunar surface, and possibly leaked this picture claiming it to be from the Chang'e-2 Orbiter in an effort to cast doubt and suspicion on any further images that are pending release. I was sent a further four highly detailed images of structures on various parts of the moon, if I can verify their authenticity I will post on my facebook page. All we can be sure of at this point is that the Image is not from the Chang'e-2 Orbiter, it does not follow that the image itself is a fake. Stay tuned. http://www.lpi.usra.edu/resources/lun...

Disclaimer: The ADG cannot confirm the authenticity of the information presented, we merely present the information to a wider audience on behalf of the filmmaker, witness, source or author.

Omg I thought you guys were serious before but your given so many facts and details thank you so much ...

Tony, if there really were an 'alien base' on the far side of the Moon, don't you think the LRO would have spotted it long before now, with its superb images, the best of which have a resolution of 0.5m/pixel?

Sagittarius said:
if there really were an 'alien base' on the far side of the Moon
Click to expand...

aw. see what happens when you don't read the text. I thought it was an alien person being shown. 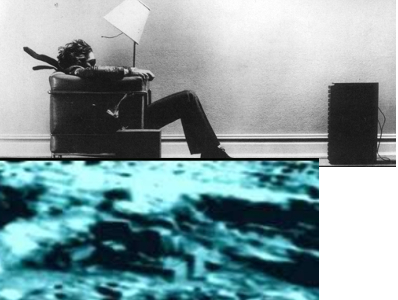 Sagittarius said:
Tony, if there really were an 'alien base' on the far side of the Moon, don't you think the LRO would have spotted it long before now, with its superb images, the best of which have a resolution of 0.5m/pixel?
Click to expand...

This is a very good point.

The principal point location is:

Content from external source
You can put these coordinates into the LROC Quickmap viewer: http://target.lroc.asu.edu/q3/

and quickly find the relevant area.

This is the place where the "base" has been added on the LO photo: 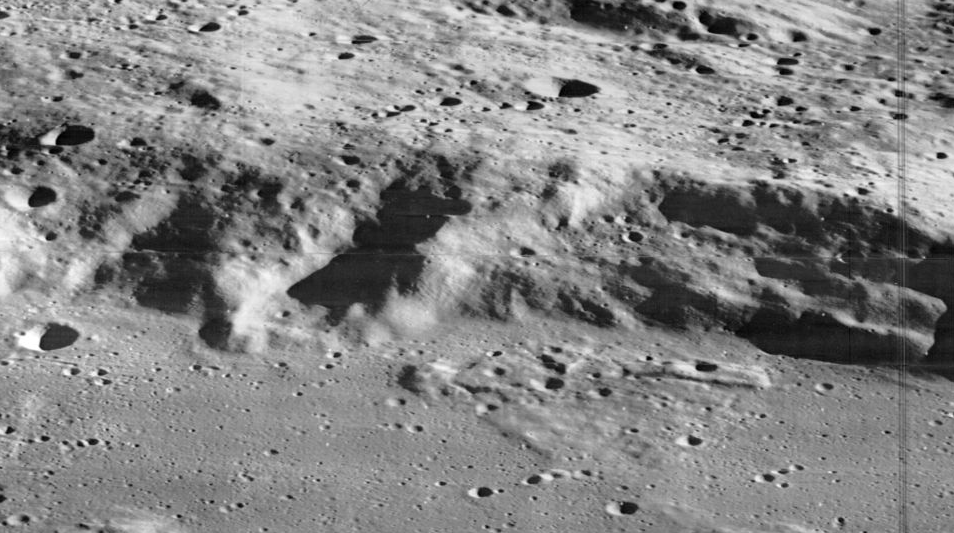 and this is the same area on the LROC map. Obviously the perspective is different but you can see the same features, including the line of three craters at the left and the horizontal ridge with a crater on top, in the foreground in front of the hills. Note that this view is at 64 metres per pixel (may be slightly rescaled on your screen). 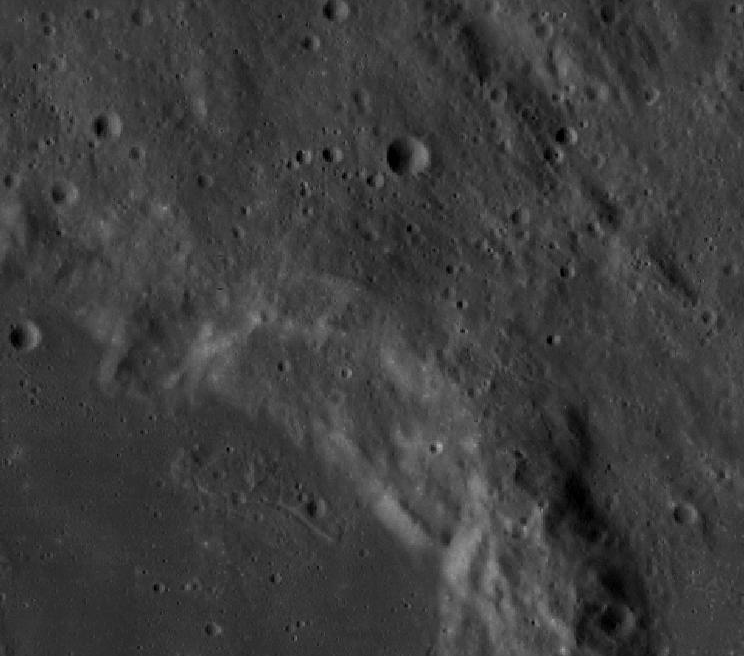 Zooming in further on the exact location of the "base", we can get right down to 50cm per pixel and find nothing but craters and rocks: 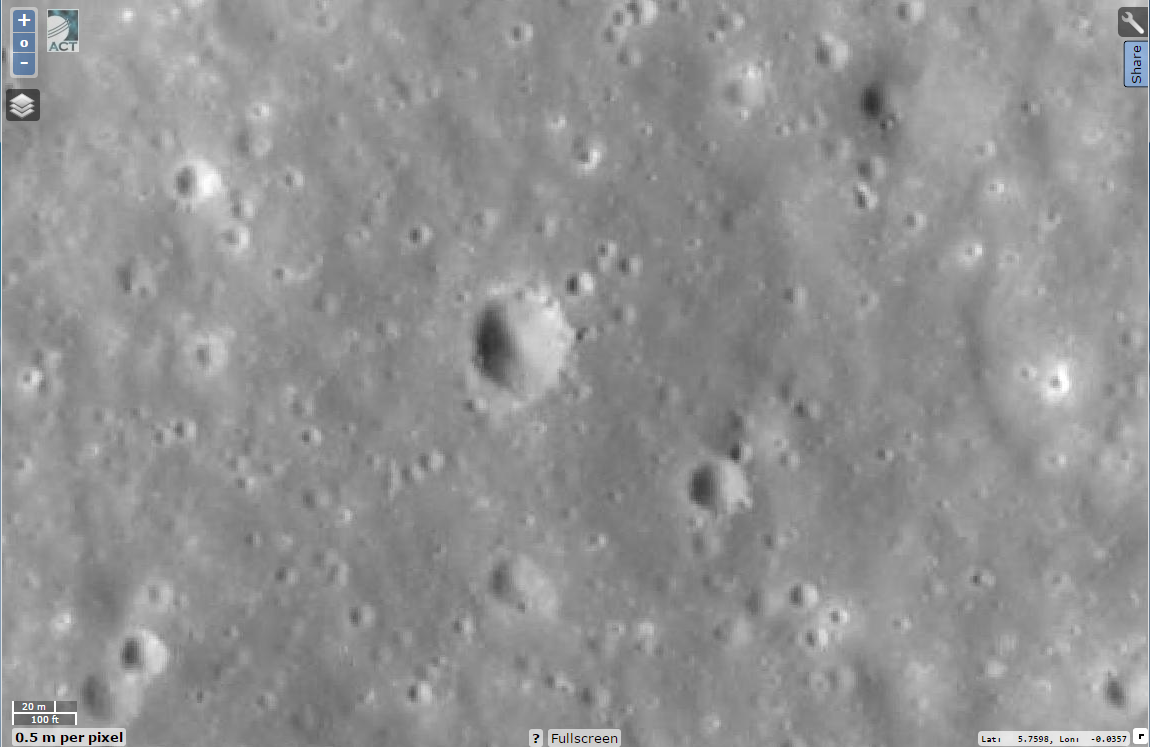 Tony_Sigel said:
Why hasn't NASA been back on foot which is strange
Click to expand...

BombDr touched on this, but the big problem with Cold War era space exploration is that both countries governments were on different pages than their space programs, but everybody seems to think they were on the same page which none of them actually were.

The US government was in it for national pride - they wanted to beat the Soviets to something. Anything, really, the moon was convenient but they'd settle for less if they could or shoot for more if they couldn't. Science was expensive but pride was priceless.
The US space program wanted to do manned and robotic interplanetary exploration.

In a way, both programs were a product of the German rocketry program, which had the same disconnect. The German government wanted long range terror weapons, while the program runners wanted space travel and advanced aircraft.


The problem all around is that when the desires of the government are met or change the support level for the program suddenly evaporates, and as budgets are redrawn year to year that money goes to other programs. Only the Russian program survived that process, and even there just barely - their unmanned programs gutted as badly as NASA's manned ones, their interplanetary programs delayed into the distant maybe just like NASA's, etc.

Okay, I'm plenty cheesed-off, but not because our stupid government did this behind our backs,
or that we got troll'd by a 48 year-old photo.

No, I'm mostly mad because our fancy-pants (remember their ritzy $640 toilet seats?) "Military Intelligence"
wizards dreamt up "Luna" for our alien moon base! Seriously guys? How about a little creative effort
when you're subverting democracy?!? It's like naming your new puppy: "Dog." Unacceptable!

Any truth to the rumor that "Nutz Over Chocolate" is the name of the most popular gay Luna Bar?

The far-side base is named "Selene".

Apologies for the thread necromancy but I came across this while researching a debunk post for someone who has recently posted a video making this claim at infowars.

The Lunar Orbiter photograph in question appears in 'The moon as viewed by lunar orbiter', of which I have an actual copy dating from 1970.

This is the relevant part of the image from my copy: 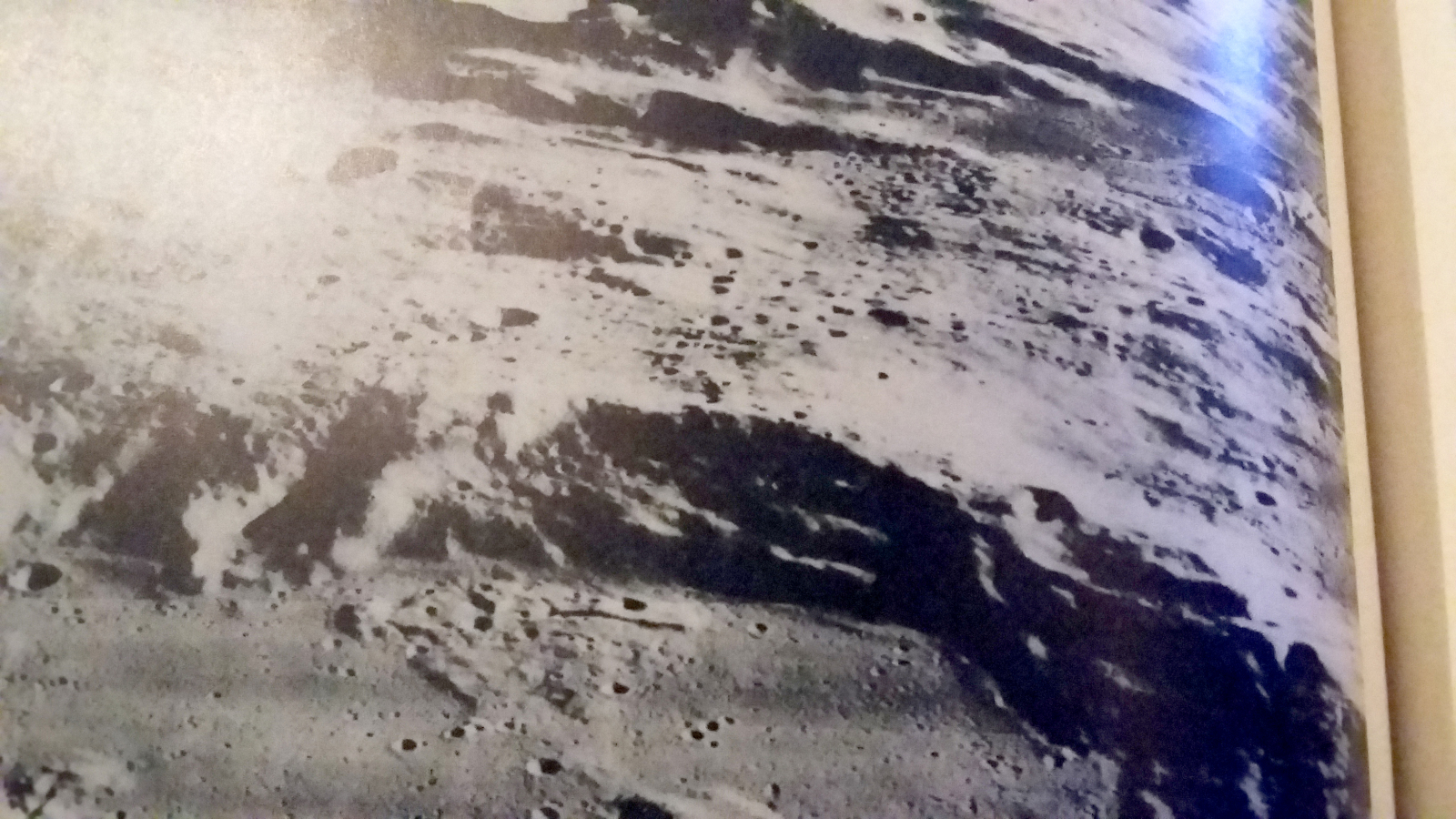 I also have two lunar atlases from the same period that mostly consisted of images taken by terrestrial telescopes, and no factories can be found in there either!

One Big Monkey said:
The Lunar Orbiter photograph in question appears in 'The moon as viewed by lunar orbiter', of which I have an actual copy dating from 1970.
Click to expand...

May 12, 2020
Jon Adams
J
A
Debunked: NASA tampered with the original television audio of the Apollo 11 moon landing