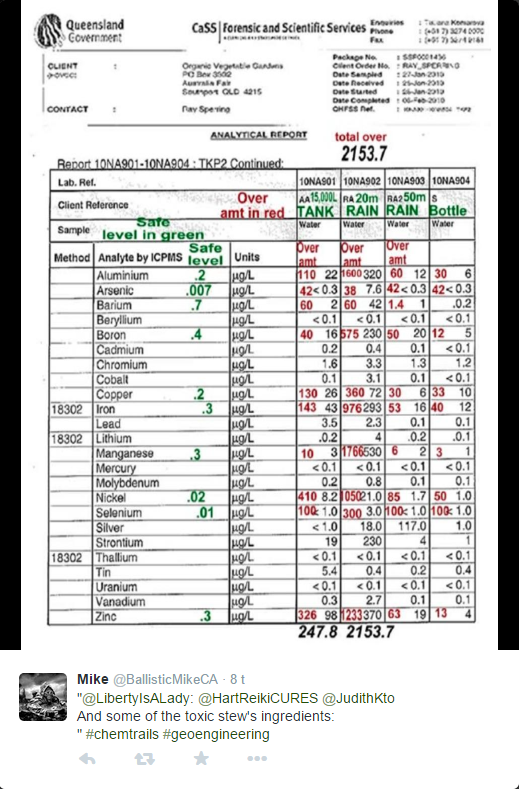 I did a quick google search, and found that the first limit (0.2 µg/L) was wrong with a factor 1000. Apparently, mg/L and µg/L was confused. So I checked them all and made a corrected version. 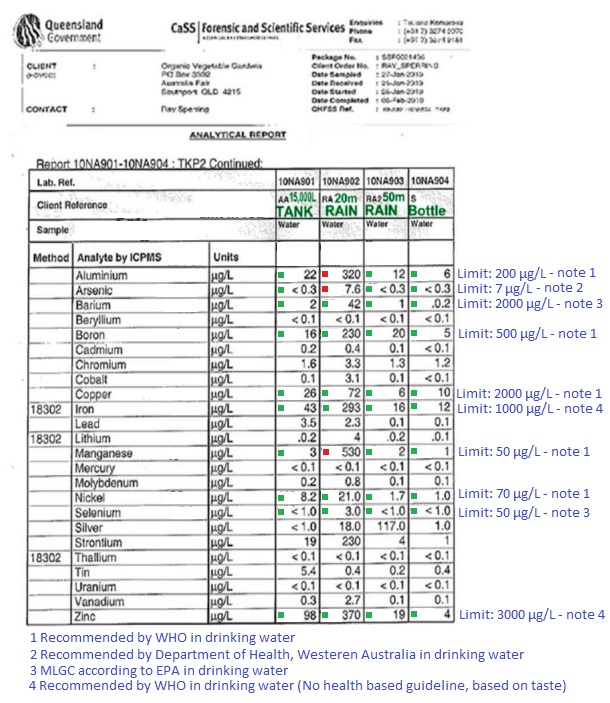 Please note that the limits I used on the above image are not limits for rainwater, but limits for drinking water. This does however make the above rainwater sample less interesting. Besides, as has been mentioned here before, it does not state where or how the samples were taken. Rainwater are easily contaminated by almost everything in the surroundings. I am personally not aware of the correct method, though.

Manganese is however roughly 10x higher than WHO recommends it for drinking water, but this could easily be a natural contamination in the rainwater sample. 530 µg/L is roughly 0.53 ppm.

Staff member
The topic of units is one that's quote hard to communicate. Unfortunately when someone does not understand something, it just becomes a issue of trust.

In particular it is very easy of anyone to confuse milligrams (mg) and micrograms (µg or ug). I quite often see "mg" and I think initially "micrograms", and have to correct myself. It's also confusing that "milli" is a thousandth, and "micro" is a millionth. The world would be so much simpler if it were the other way around.

The WHO docs are very interesting reading, and would be great perspective to anyone concerned about the quality of their drinking water. For example, managanese:
http://www.who.int/water_sanitation_health/dwq/chemicals/en/manganese.pdf


Heavy tea drinkers may have a higher manganese intake than the general population.
An average cup of tea may contain 0.4–1.3 mg of manganese (ATSDR, 2000). In
addition to dietary sources, approximately 12% of the adult population of the USA
consumed manganese supplements in 1986 (Moss et al., 1989). The median intake of
manganese in these dietary supplements was determined to be 2.4 mg/day, similar to
the amount of the element consumed in the diet (based on information from the Third
National Health and Nutrition Estimation Survey, held in 2001).

The hazard posed by overexposure to manganese must be weighed against the
necessity for some minimum amount of manganese in the diet, because manganese is
an essential nutrient, acting as a component of several enzymes and a participant in a
number of important physiological processes. Freeland-Graves et al. (1987) suggested
a range of 3.5–7 mg/day for adults based on a review of human studies.

So with the high levels of manganese in those samples, you could observe that two liters of the "contaminated" rainwater contains as much manganese as one cup of tea. And you'd have to drink ten liters of it to get about the average amount of manganese consumed in a healthy diet.

Again though, these things are difficult to communicated.

And perhaps getting lost here is the underlying claim that the chemicals were sprayed out of a plane. If we just focus on discussing what is healthy, it might come across as saying "look, this spraying is not that bad for you, maybe even healthy", when in fact the point is that there's zero evidence that the chemicals came from planes, and lots of evidence that it's just normal background variability and mundane contamination.

Staff member
See also this test from New Zealand, which is used as "evidence" that metals are being sprayed from planes: 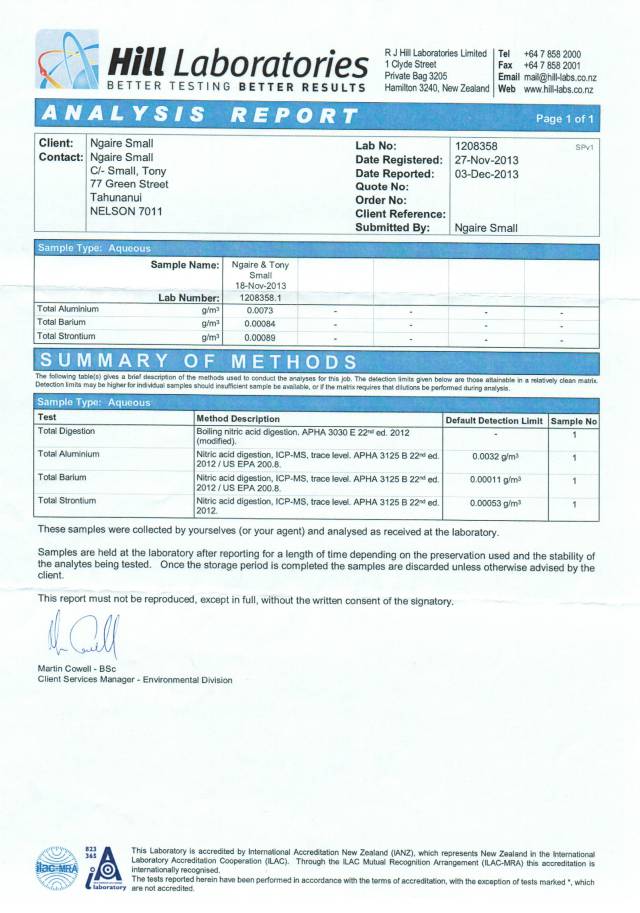 This time the units are grams per cubic metre.

One cubic metre is 1,000 litres (and, as one litre of water weighs 1kg, than means it is a TONNE of water).

So, the levels are:


Looking at it another way, an entire metric tonne of rainwater contained about 7 milligrams of aluminium, or approximately one four-thousandth of an ounce. The levels of barium and strontium were more than eight times lower even than this.

Trailblazer said:
See also this test from New Zealand, which is used as "evidence" that metals are being sprayed from planes:

So, the levels are:

There is a column in the report for Default Detection Limit. These are the minimal concentrations that can be detected by this method. That is, the reported concentrations of the three metal ions are just 2-8 times more than their minimal detectable values.

The Default Detection Limit is indicated on the form in the OP as well. Take for instance the line for arsenic which reads "<0.3µg/L" this is the DDL and indicates that no arsenic was detected, yet they have it labelled up as being 42 times the safe limit.

jonnyH said:
The Default Detection Limit is indicated on the form in the OP as well. Take for instance the line for arsenic which reads "<0.3µg/L" this is the DDL and indicates that no arsenic was detected, yet they have it labelled up as being 42 times the safe limit.
Click to expand...

The use of the < sign confuses many. I have had many arguments with a particular group when they do calculations with 2 less than figures e.g. <0.54 / <0.06. They fail to understand the significance of the symbol and ignore it. It would be far simpler for some labs to just say it means there is a trace below <

I'm actually kind of surprised they don't seem to raise alarm about the uranium numbers, given their assumption that < means =.

Hevach said:
I'm actually kind of surprised they don't seem to raise alarm about the uranium numbers, given their assumption that < means =.
Click to expand...

Presumably there isn't an easily quotable "safe limit" for uranium in drinking water.

I did only look up the safe limits for those "contaminants" which was already typed in the chart. I supposed that if the believers didn't find silver, strontium or uranium interesting, I didn't want to be the one to bring it up in the Twitter thread! But I was however puzzled that they didn't. I'm on my phone right now, but I might try to look up safe limits for strontium and silver tomorrow. Just to be sure we got all relevant info in this thread.

So even allowing for the fact they confused micrograms and milligrams, these samples were still well below those limits.

Trailblazer said:
So even allowing for the fact they confused micrograms and milligrams, these samples were still well below those limits.
Click to expand...

I guess that is why they didn't list the safe limit for those. If it does not support their claim, it's not relevant, apparently. 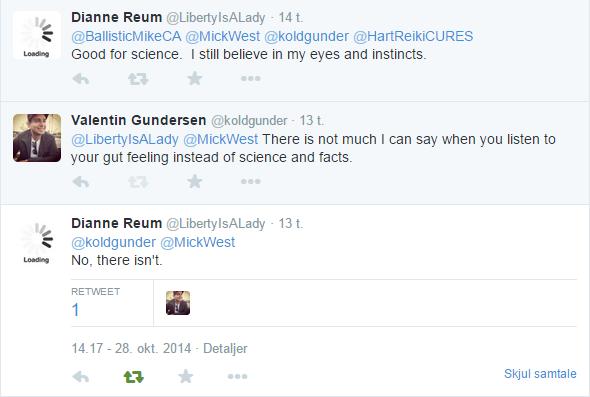 This is clearly a loosing battle...
You must log in or register to reply here.