Debunked: A Snow Test for Signs of Geoengineering, Portland Oregon 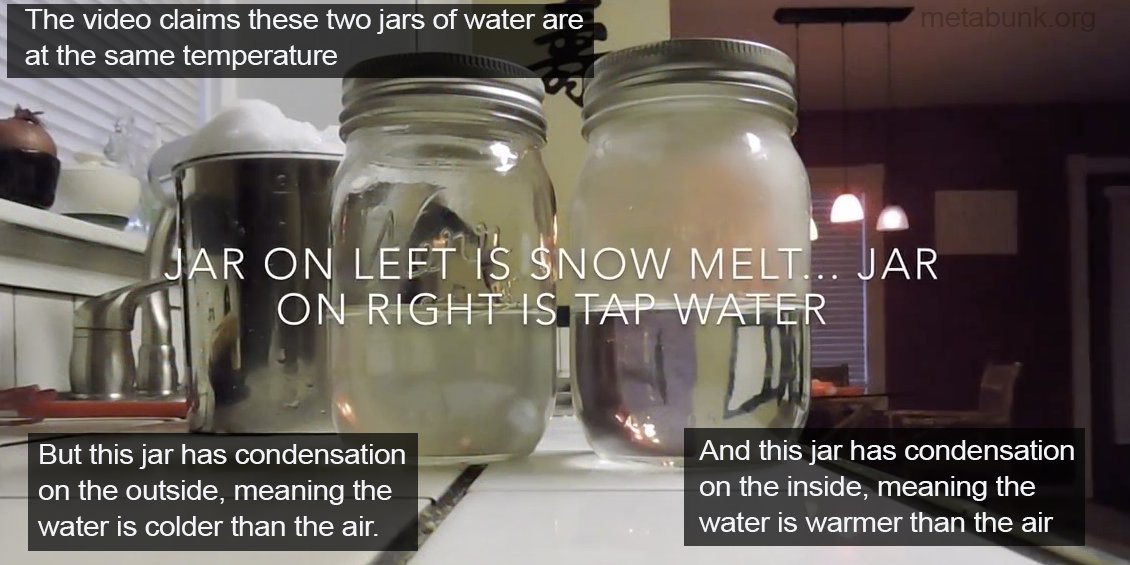 Proponents of the theory that there's a secret geoengineering program going on often try to find odd things about snow, as they feel that unusual snow is a sign of geoengineering. In a video, one proponent claims to have two jars of water, one being snow melt, and the other being tap water. He claims the jars are at the same temperature. He then demonstrates that the melt-water jar seems to melt less additional snow than the tap water jar. He does this by adding approximately equal amounts of snow to both jars. The result being this: 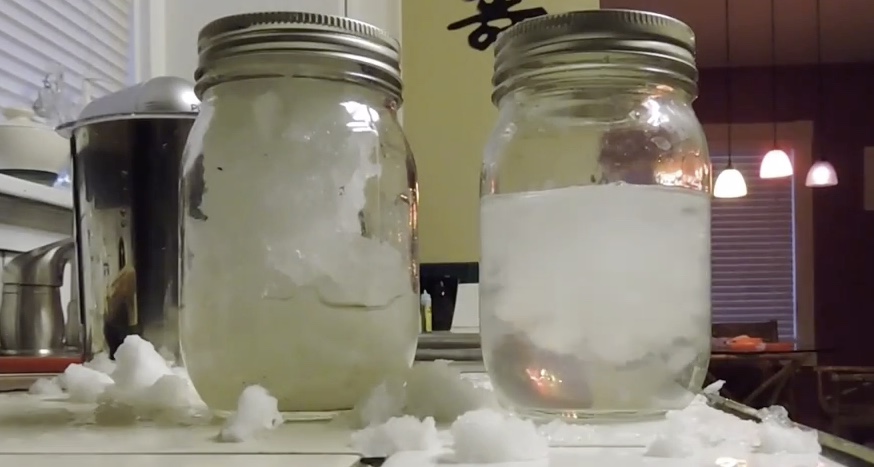 However this is quite obviously because the jars of water are at different temperatures, as demonstrated by the differences in condensation noted above.

[Update] The maker of the video claims that the jar on the left does not have condensation on the outside, it's just dirt from the snow. However this is does not change the fact that there's a difference in condensation, with there being visible condensation inside the right jar.
Last edited: Jan 4, 2016

Mick West said:
He claims the jars are at the same temperature.
Click to expand...

It looks like he just let snow to melt at room temperature and assumed, without measuring temperature of the resulting amount of water, that it would remain the same, which is not true. Melting snow or ice is endothermic process in which the system absorbs heat from its surroundings. He should have used a thermometer to demonstrate the contents of both jars were at the same temperature. Alternatively, he could allow sufficient time for the jars to equilibrate temperatures with their surroundings. However, either of these controls would proved him wrong.

Also I noticed when he put the snow into the snow melt jar, he jammed it in compressing the snow, in effect causing it to be more difficult to melt quickly. And when he put the snow in the right jar he did not jam and compress the snow, AND he put LESS snow in because he ran out of snow!
And in the beginning of the video he said it was strange that the water from the snow he melted was only about 15% of the volume of the snow. Well as a weather observer, I can attest to the fact that snow that isn't compacted generally takes up 10 times the volume of an equivalent amount of water, so when we measure snowfall, we melt it and find out what the water amount is, and usually it is 10% of the snow volume, IE, 5CM of snowfall, would equate to .5CM (or 5MM) of water. This amount varies somewhat depending on how wet the snow is, so can be anywhere from 7% (really dry snow) to 20% (very wet snow). So when he said 15%, that falls right in with somewhat wet snow which would be seen in a coastal area like Portland.
And I totally agree with Trailspotter, he should have had thermometers in each jar to make sure the temps were equal. And I would add that the snow should be weighed, and an equal weight of snow should be placed in each jar, THEN I believe the test would be accurate.

Sometimes I look at these 'snow doesn't melt' or 'melting snow smells like plastic' or similar videos to be a sort of anecdotal proof of climate change.

I'm a Canadian, and I grew up with winters that had me up to my knees in snow 4 months out of the year. I've played in it, skied in it, shoveled it, melted it, eaten it, thrown it, turned it yellow.. you name it, I've done it to or with snow. I meet the '10,000 hours makes you an expert' benchmark in my relationship with snow. So when I see videos like the one above, I can only assume the poster is willingly misleading the observers, or that they're simply not that familiar with the white stuff.

And in many areas south of where I live, snowfalls of years past were less common and less voluminous than they've been in recent years. It causes havoc on the roads, because the local municipalities aren't equipped with the proper methods and equipment (and manpower) for snow removal, salting/sanding roads, etc. Cars in those areas aren't fitted with all-season or snow tires, and the local drivers simply aren't experienced enough driving in snow to get through 'real' winter conditions safely. They tend to think an SUV, truck, or any 4x4 is enough to just plow through at the same speed as if there were no snow on the ground.

I watch this poor adaptation to heavy snowfall every year on the news, and I see towns just a few hours south consistently suffering through winters they simply hadn't had to suffer through maybe a decade or two ago. Things are changing, and I guess with that comes a susceptibility to CT about snow, and a quicker acceptance of these mis-guided experiments with snow.
Last edited: Jan 4, 2016

JDubyah said:
And in many areas south of where I live, snowfalls of years past were less common and less voluminous than they've been in recent years.
Click to expand...

Meanwhile on this side of the Atlantic, snow seems to be becoming ever rarer. In my part of England, the whole of December passed without so much as a frost!

But I think these theories not only betray a lack of familiarity with snow, they show a lack of understanding of weather in general, and how powerful and, well, big it is.

For example, look at lake-effect snowfall, which often produces extreme snow events that get picked up as "engineered weather".

Snow clouds most often form in narrow bands where the size and orientation are determined by the shape of the body of water and the prevailing wind direction. In the most extreme cases, the heaviest bands of snowfall may be 20 to 30 miles wide and extend over 100 miles inland from the lake.

Within the band, snowfall rates may exceed 5 inches an hour and be accompanied by lightning and thunder, a phenomenon known as thundersnow.

That's an extreme case, so let's halve it in both directions - a band 10 miles wide and 50 miles long. That's 500 square miles, with 5 inches of snow per hour, which is roughly equivalent to half an inch of liquid water.

500 square miles x 0.5 inches works out at over 16 billion litres of water, or 16 million tons. Per hour. In one reasonably modest lake-effect snow band.

The idea that mankind is powerful enough to control this stuff artificially, and to do it, as often claimed, across the entire planet, is utterly unbelievable.

As a scientist, it rips my tiny brain to pieces trying to understand how these people "science".

How hard is it to use a thermometer!!!

Auldy said:
How hard is it to use a thermometer!!!
Click to expand...

...and handle something with mercury in it!! A CT friend of mine wont use energy saving lightbulbs cos they contain trace amounts of mercury, let alone use a sealed glass tube full of the stuff.

Auldy said:
As a scientist, it rips my tiny brain to pieces trying to understand how these people "science".

How hard is it to use a thermometer!!!
Click to expand...

well at least the video debunks the myth that all Star Wars fans are "sciency" nerds.
You must log in or register to reply here.

T
Claim: National Endowment for Democracy has funded the Chief Editor of The Kyiv Independent

T
Need Debunking: Sayyid Qutb was a Liason for the Communist International