I'm pretty apolitical but noticed recently that the FBI mentioned something similar that extreme right wing groups are the biggest terror threat. After seeing this quote today on MSNBC, I wanted to finally ask for some advice on where to find facts that back up the claim. I can only think of a few incidents but none that i'd describe as being in "recent years".

Did some research myself but most sources seem to be questionable or bias towards right wing/conservative. If I find anything in the mean time, will update this post.

Cheers.
p.s. Figured this would be the best place to ask, usually watch Mick's podcast and finally made an account here.

I suppose it depends on what you count as "in recent years". You could slice that data a variety of ways.
S

Thanks for the link Mick. I checked it out and compiled some notes (posted in 2nd section below horizontal line) for anyone who may be interested.

After researching the wikipedia list it feels like many recent events from 2020 seem to be quite comparable to events from the terror attack list. Again, i'm not well versed on this type of topic so maybe i'm ignorant of some classifications/definitions as to why the following events aren't at all comparable to terror/political/racial related attacks:
I believe the FBI stated that Antifa is an "idea not an organization", perhaps that statement allows all of the attacks in 2020 to be excluded? That feels a bit questionable though, maybe it feels questionable because i'm unaware of some legal classification etc?


--Wiki link notes--
wikipedia link notes on attacks since 2016, some required research due to lack of an entry so I searched the web to find out what "affiliation" a perpetrator had. Here is a brief overview of the list, may have missed something but figured i'd just include my notes in case anyone is interested.

Seems weird to claim on the 20th anniversary year of 911, which is still claiming lives due to the toxic dust.

Mick West said:
I suppose it depends on what you count as "in recent years".
Click to expand...

Chertoff saying that "over the last few years, most of the deaths in the U.S. that have come from acts of terrorism, they're not from global jihadist terrorists, but from extreme right wing groups."

(he also says at end that Trump "pats white nationalists on the back", so.. yea numbers are probably needed to weed out bias. although aside from antifa, i havent heard of any environmental terrorist attacks or other typical left wing attacks in the last few years)

the banner below the interviewee says he is director of the Chertoff Group. so he might have data on his website. 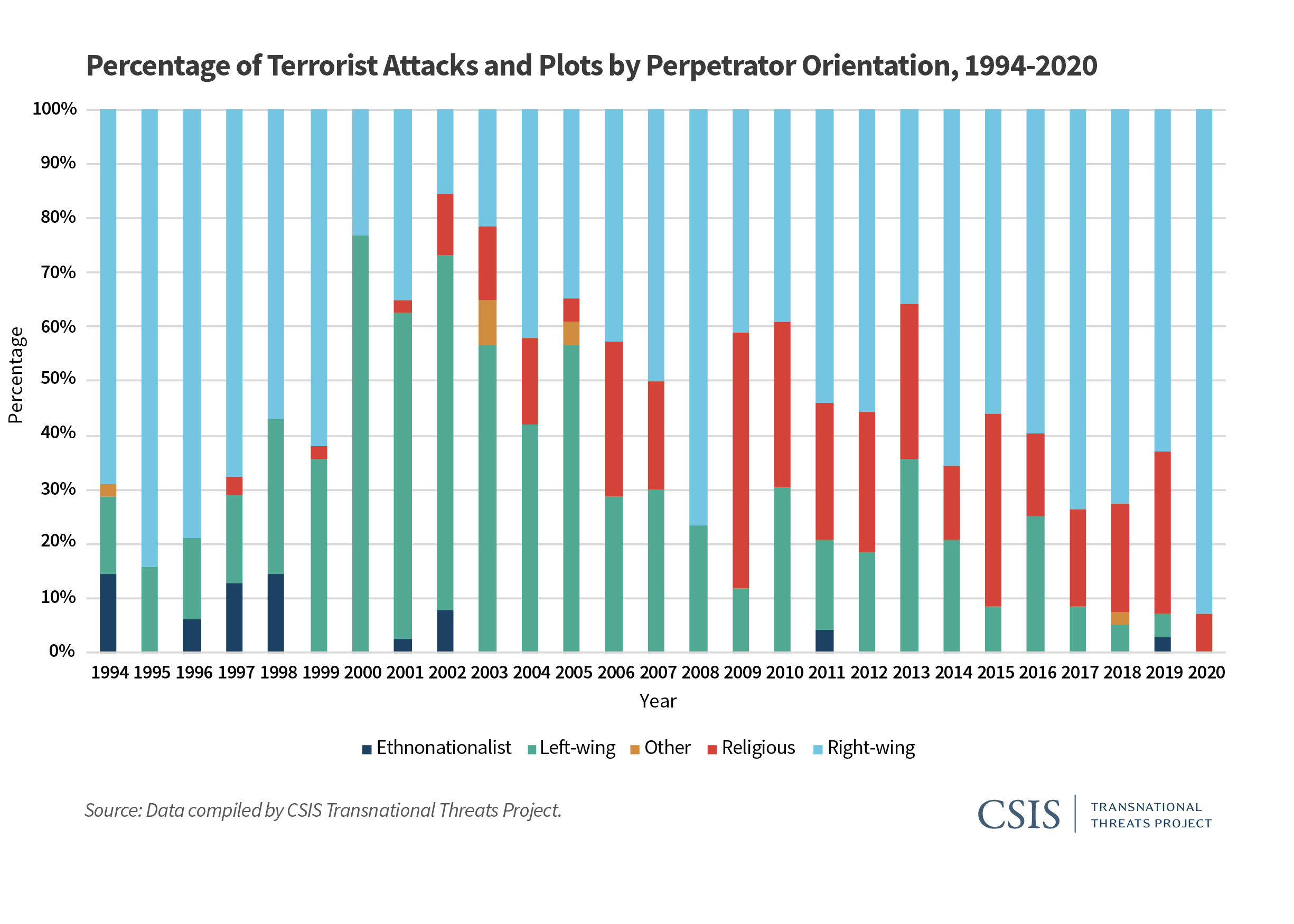 Yes seems to be the case recently, Though if you go back to the 1970s, I would say the Left Wing were then doing far more of the terrorist attacks on US soil.

CaptainCourgette said:
if you go back to the 1970s, I would say the Left Wing were then doing far more of the terrorist attacks
Click to expand...

and the beginning of this century. looking at your chart there. that's kinda surprising.

@seeker3598
I'm surprised you're classifying the Gretchen Whitmer kidnapping plot as leftist; Wikipedia attributes it to the boogaloo movement, and puts that on the far right.

The suspects were tied to a paramilitary militia group that called themselves the Wolverine Watchmen. The group was co-founded by suspects Pete Musico and Joseph Morrison; the latter is considered the group's "commander".[22][23][24] An NBC News investigation into the suspects' social media profiles found links between their ideologies and those of the broader boogaloo movement.[25

The boogaloo movement, whose adherents are often referred to as boogaloo boys or boogaloo bois,[3] is a loosely organized far-right anti-government extremist political movement in the United States.

the thread topic is DEATHS. attacks and plots is a whole nother kettle of fish.

seeker3598 said:
After researching the wikipedia list it feels like many recent events from 2020 seem to be quite comparable to events from the terror attack list. Again, i'm not well versed on this type of topic so maybe i'm ignorant of some classifications/definitions as to why the following events aren't at all comparable to terror/political/racial related attacks:

Terror usually implies some kind of plan or strategy to effect political goals. Even your very first example doesn't rise to that standard.

If you want to gain an unbiased view of the violence surfounding the BLM protests, consult https://en.m.wikipedia.org/wiki/Violence_and_controversies_during_the_George_Floyd_protests ; it improves on your list in completeness by also showing violence committed by right-wing perpetrators.

For example, this (emphasis mine):

In Oakland, California, amid unrest, a Federal Protective Service officer, David Patrick Underwood, was fatally shot outside a federal courthouse in a drive-by attack that also wounded another guard.[53] Underwood had been providing security at the courthouse during a protest.[51] The Department of Homeland Security labeled the shooting an act of domestic terrorism.[94][54] Boogaloo movement member Steven Carrillo was charged with the murder on June 16. He was also implicated in the murder of a Santa Cruz County deputy.

The topic of the thread is deaths.

Chertoff -DHS secretary for George W. Bush-might be talking about after 2016? since there was a report examining sept 13, 2001 through Decemebr 2016.

PolitiFact recently examined the GAO report and found, like the Reveal investigation, that more attacks were carried out by far-right violent extremists. But more people died during attacks connected with Islamic jihadists.

Of those 225 deaths by extremists:

• 106 individuals were killed by far-right violent extremists in 62 separate incidents; 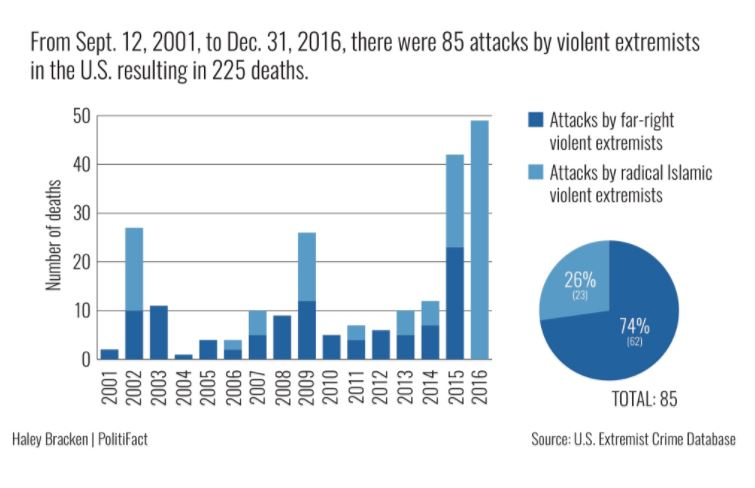 Sauron said:
Seems weird to claim on the 20th anniversary year of 911, which is still claiming lives due to the toxic dust.
Click to expand...

9/11 is still choking every soldier that deployed too...

CaptainCourgette said:
Yes seems to be the case recently, Though if you go back to the 1970s, I would say the Left Wing were then doing far more of the terrorist attacks on US soil.
Click to expand...

As others pointed out, this plot shows attacks, while the question asks about deaths.

In Portland, Oregon, Aaron J. Danielson was shot in the chest and killed on the night of August 29, amidst protests and riots in the city. Danielson wore a hat with the insignia of Patriot Prayer, a far-right group based in Vancouver, Washington that has clashed with protesters in the past.[88] Michael Forest Reinoehl, responsible for the shooting, who was an anti-fascist activist and self-described supporter of antifa, writing "I am 100% ANTIFA all the way!" in an Instagram post in June,[109] said in an Associated Press video interview earlier in the summer that he had provided security for other protesters.[110][111] In a Vice News interview after the shooting and before being killed by the police in conflicting reports,[112] Reinohel clarified that "I am 100% anti-fascist. I'm not a member of Antifa. I'm not a member of anything", stating that he "had no choice" and acted in self-defense.[113][114]
Click to expand...

heres teh link with the chart. They specifically talk about anti-fa as left wing. they include attacks and foiled plots too (sometimes). George Floyd died May 25, 2020
https://www.csis.org/analysis/escalating-terrorism-problem-united-states

on the page (near bottom) is a link to methodology
https://csis-website-prod.s3.amazonaws.com/s3fs-public/publication/200616_Jones_Methodology_v3_0.pdf


in the 50 U.S. states and Puerto Rico between January 1, 1994, and May 8, 2020. This time period was selected in order to provide context on the history of domestic terrorism in the United States in recent decades, and in particular to allow analysis of how the current right-wing threat compares to the last major wave of right-wing violence in the 1990s.

ATTACKS AND PLOTS We included both attacks and foiled plots in the data set, but a variable was added to distinguish between the two. Incidents were defined as plots if they demonstrated plans or intention to commit an act of terrorism that was prevented, most often due to law enforcement intervention or failure during the preparation stages (such as explosives detonating during production). Incidents were defined as attacks if action was taken to carry out an act of terrorism. This includes attacks that both succeeded and failed. We coded threats of violence as attacks rather than plots, even if the threat turned out to be a hoax

When the FBI has talked about this in the past, it wasn't necessarily about actual violent incidents. Their assessments have been more about right-wing objectives (and the capability to carry them out) and the potential results if those plots were to be successful - plots to overthrow the government, begin a civil war etc.

Jan 6th of course highlights those capabilities and objectives.
You must log in or register to reply here.