Harriet Hall is a skeptic who has written for The Skeptic Enquirer, Quackwatch, and Skeptic. In 2015 she produced a series of videos for the James Randi Foundation criticising alternative medicine. In this one she takes a look at acupuncture, and makes the claim that it's neither "ancient" nor, probably, "Chinese". 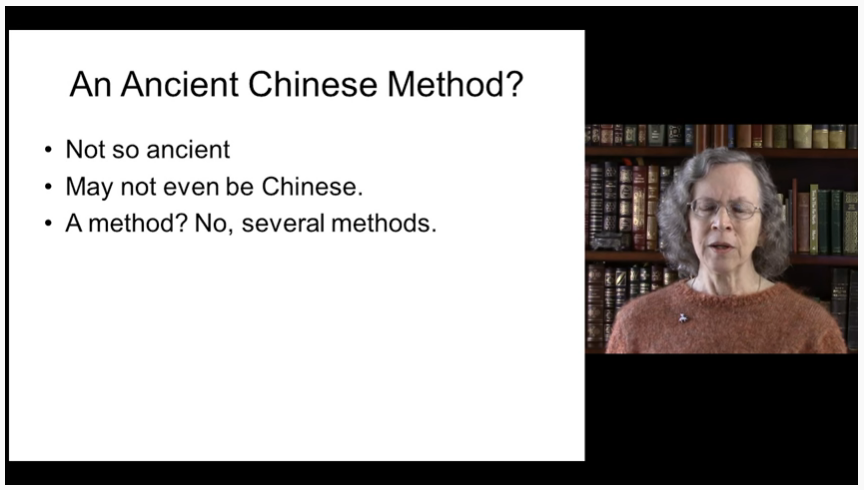 You may have heard that acupuncture is an ancient Chinese treatment. That it involves sticking needles in acupoints. That it's widely used in China. Every one of these statements is FALSE. An "ancient Chinese method"? Every word of that is wrong. It's not so ancient, it may not even be Chinese, and it's not a method but many different methods.
Click to expand...

She then goes on to claim that the earliest referencing to "needling" is from 90BC, and that it refers to "bloodletting and lancing using large needles made of stone and bone" with "early diagrams showing blood vessels, not meridians".

These claims are then followed by a confusing little section that insinuates that acupuncture is really a twentieth-century invention; that a Frenchman invented the idea of meridians in the 1930s, and that acupuncture maybe actually arrived in China from "ancient Greece via the trade routes" (which is accompanied by a map showing routes from the 1st century, which kind of contradicts her earlier claims of it not being "ancient").

It seems a curious hodgepodge of ill-researched ideas haphazardly cobbled together by someone with a pre-determined agenda. But what do others say?

Well, if I start with wikipedia - which labels acupuncture a "psuedoscience not based on scientific knowledge...quackery", and very clearly is no fan of it - I find:


Acupuncture, along with moxibustion, is one of the oldest practices of traditional Chinese medicine. Most historians believe the practice began in China, though there are some conflicting narratives on when it originated.

Acupuncture is believed to have originated around 100 BC in China [...] though some experts suggest it could have been practiced earlier.

The first documentation of an "organized system of diagnosis and treatment" for acupuncture was in ‘Inner Classic of Huang Di (Huangdi Neijing) from about 100 BC.

The autobiography of Bian Que from around 400–500 BC references inserting needles at designated areas. Bian Que believed there was a single acupuncture point at the top of one's skull.

Texts dated to be from 156–186 BC document early beliefs in channels of life force energy called meridians that would later be an element in early acupuncture beliefs.

The "practice and theoretical underpinnings" of modern acupuncture were introduced in The Yellow Emperor's Classic (Huangdi Neijing) around 100 BC. It introduced the concept of using acupuncture to manipulate the flow of life energy (qi) in a network of meridian (channels) in the body. Some of the sites acupuncturists use needles at today still have the same names as those given to them by the Yellow Emperor's Classic.

Numerous additional documents were published over the centuries introducing new acupoints. By the 4th century AD, most of the acupuncture sites in use today had been named and identified.


Furthermore, Edzard Ernst - a university professor and noted critic of acupuncture known as "the scourge of alternative medicine" (and trumpeted by Harriet Hall as "the world's foremost expert on complementary and alternative medicine") - wrote the following (in 2004):


Acupuncture is generally held to have originated in China, being first mentioned in documents dating from a few hundred years leading up to the Common Era. Sharpened stones and bones that date from about 6000 BCE have been interpreted as instruments for acupuncture treatment, but they may simply have been used as surgical instruments for drawing blood or lancing abscesses. Documents discovered in the Ma-Wang-Dui tomb in China, which was sealed in 198 BCE, contain no reference to acupuncture as such, but do refer to a system of meridians, albeit very different from the model that was accepted later.

The first document that unequivocally described an organized system of diagnosis and treatment which is recognized as acupuncture is The Yellow Emperor’s Classic of Internal Medicine, dating from about 100 BCE. The text is likely to be a compilation of traditions handed down over centuries, presented in terms of the prevailing Taoist philosophy, and is still cited in support of particular therapeutic techniques. The concepts of channels (meridians or conduits) in which the Qi (vital energy or life force) flowed are well established by this time, though the precise anatomical locations of acupuncture points developed later.


It seems very likely that Hall read this paper, or some similar writing done by Ernst, and misremembered/confused the mentions of bloodletting using bones and stones from earlier texts, and never really went very far in her research.

In any case, it's a pretty poor effort from a supposedly respected member of the skeptical community. I'm sure there are more things that can be debunked in her talk but, to be honest, it was tough going to listen to and I found it hard to continue - especially after such a dodgy start.

(Note: I'm not saying anything here about claims made as to whether acupuncture works or doesn't: it's purely about Hall's claims.)
Last edited: Sep 24, 2021
You must log in or register to reply here.