Chemtrail response from Swiss Federal Office of the Environment

Staff member
The following letter was posted on Madisonstar Moon's Facebook page. It was apparently written by FOEN (BAFU in German), the Swiss federal environment office in response to a "chemtrail activist". I'm posting it here because it is a much more thorough and better-written response than many we see from governments. 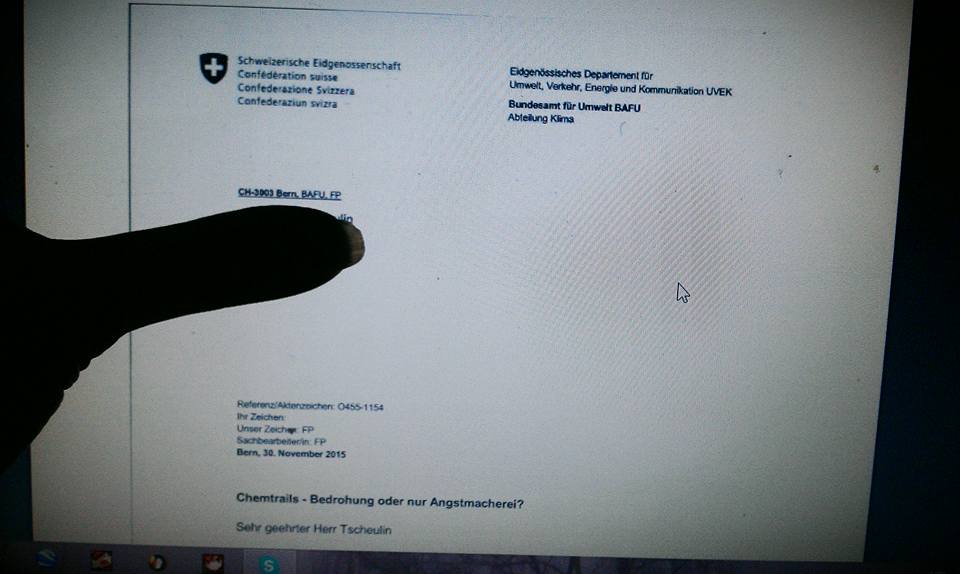 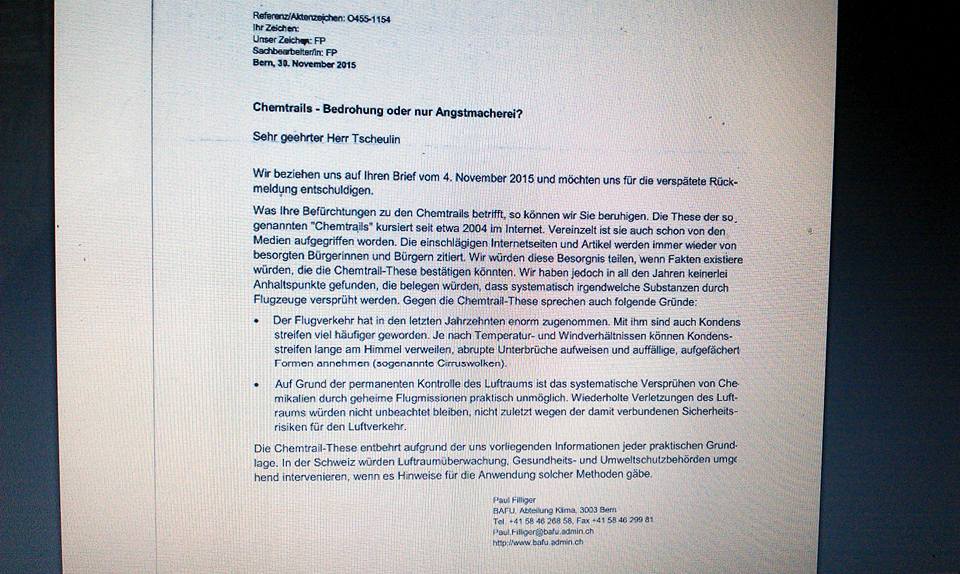 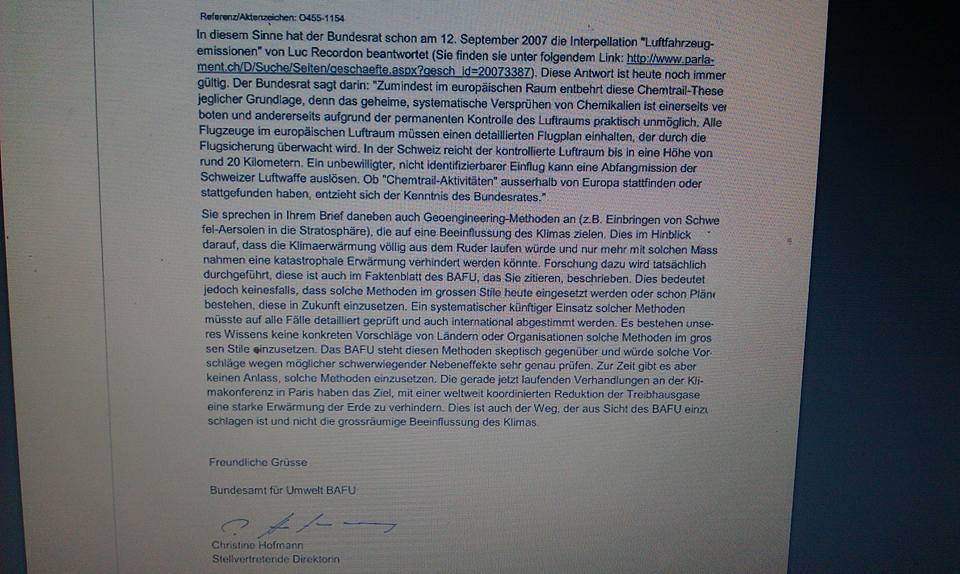 Translation follows. My German is not too great so this is mostly machine-translated and then edited for sense. Any improvements welcomed!


We refer to your letter of 4 November 2015 and would like to apologise for the late response.

As for your fears about chemtrails, we can reassure you. The theory of so-called "chemtrails" has been circulating on the internet since around 2004. Occasionally it has also been taken up by the media. Related websites and articles are repeatedly cited by concerned citizens. We would share this concern, if facts existed that would confirm the chemtrail theory. However, in all these years we have found no evidence that any substances are being systematically sprayed from airplanes. The following reasons also contradict the chemtrail theory:

According to the information available to us, the chemtrail theory lacks any practical basis. In Switzerland, radar control, and health and environmental authorities, would intervene immediately if there were any evidence for the use of such methods. The Federal Council has already responded, on 12 September 2007, to the interpellation [parliamentary questions] “Air vehicle emissions" by Luc Recordon (you can find it at the following link: http://www.parlament.ch/D/Suche/Seiten/geschaefte.aspx?gesch_id=20073387). This response is still valid today. The Federal Council says: "At least in European airspace, the chemtrail theory lacks foundation, because the secret, systematic spraying of chemicals is both prohibited and practically impossible due to the permanent control of airspace. All aircraft in European airspace must comply with a detailed flightplan, and the skies are monitored by air traffic control. In Switzerland, controlled airspace extends to an altitude of around 20 kilometres. Even one unauthorised, unidentified test flight may trigger an interception mission by the Swiss Air Force. Whether ‘chemtrail activities’ outside Europe are taking place or have taken place, is beyond the knowledge of the Federal Council.”


In your letter you also speak in of geoengineering methods (for example, introduction of sulfur aerosols into the stratosphere) aimed at influencing the climate. This in view of the fact that global warming could run completely out of control and only with such a measure could catastrophic warming be prevented. Research is actually being carried out, which is also described in the FOEN fact sheet which you quote. However, this does not mean that such large-scale methods are used today or that there are plans to use them in the future. Any future systematic use of such methods would in any case have to be examined in detail and co-ordinated internationally. There are to our knowledge, no concrete proposals from countries or organisations to use such methods on a large scale.

The FOEN is skeptical of these methods and would examine such proposals very closely because of possible serious side effects. Currently there is no reason to use such methods. The currently ongoing negotiations at the climate change conference in Paris have the aim of preventing a strong warming of the earth with a globally coordinated reduction of greenhouse gases. This is also the path to be pursued from the perspective of the FOEN, and not large-scale influence on the climate.


Federal Office for the Environment FOEN


Edit to add: the letters that Herr Tscheulin has sent to the FOEN can be found here: http://www.tscheulin-software.com/php/BAfU/anmeldung.htm

For information and by way of contrast: The cypriot government pledges to probe chemtrails:
http://cyprus-mail.com/2016/02/17/minister-pledges-probe-into-chemtrails/

Agriculture and Environment Minister Nicos Kouyialis has pledged that the government will look into the alleged spraying of chemtrails in Cypriot skies, following demands by concerned citizen activist groups and farmers.

There are new reasons for chemtrails:

The Greens think the spraying is likely intended to alter atmospheric/climatic conditions, also known as geo-engineering. It is thought that aircraft operating out of the SBAs are spraying particulates which affect the weather, preventing the formation of clouds, so as to facilitate visibility for bombing sorties en route to Syria.

Henk001 said:
For information and by way of contrast: The cypriot government pledges to probe chemtrails
Click to expand...

A previous investigation back in 2010 by government departments, analysing air samples, turned out to be a whitewash, the MP recalled.

The Cyprus story had now made the Daily Mail in the UK. Quite a few chemtrail believer posts in the comments sections.

http://www.dailymail.co.uk/news/art...er-Tornado-Typhoon-aircraft-fly.html#comments
You must log in or register to reply here.