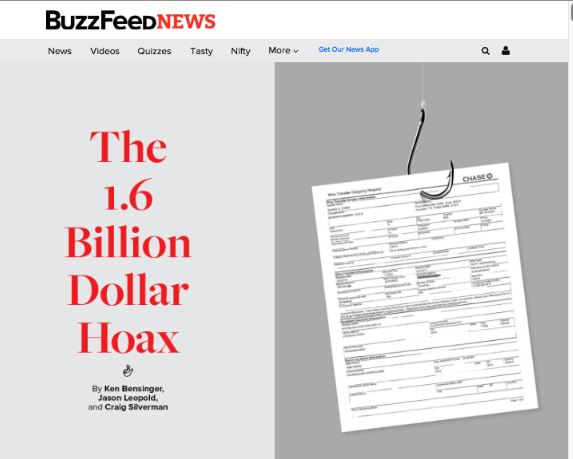 Buzzfeed posted an interesting story about what amounts to a cottage industry whose primary product is fake news.


In the slightly more than four months since the presidential election, a burgeoning market for potentially damaging information about President Trump and his associates has emerged. Opportunists have begun dangling such would-be smoking guns — sometimes for a price — in front of journalists, amateur sleuths, and deep-pocketed political activists so eager to damage the Trump presidency that they can be blind to potential red flags.

Such forgeries escalate the phenomenon of “fake news,” the Facebook- and Twitter-friendly lies that tell readers what they want to believe and that are packaged to look like authentic journalism. In this case, evidence was deliberately fabricated that could make fictional allegations seem authentic. Such forged documents also feed the hunger of a growing audience on the left that seems willing to believe virtually any claim about Trump’s supposed bad deeds.

There are multiple examples cited in the story. The centerpiece explains a 35-page document that was submitted as proof of a $1.6 billion wire transfer from ExxonMobil to the Trump Organization. The money was alleged to be a bribe that resulted in Rex Tillerson’s appointment as Secretary of State.

Buzzfeed does a good job of breaking down the forgery, including an interactive section called “Anatomy of a Phony Document.”

It is worth a read.
You must log in or register to reply here.