Paid anti-Trump protesters ? it's a Hoax

Several pre-election fake news stories and ads on Craigslist for "paid protesters" had found their way onto the social media, and spread through thousands of re-postings.
These stories are continuing to be re-posted, even now, after the election.

Back in March of this year, Paul Horner created a fake news story on his site "abcnews.com.co", which has nothing to do with ABC the network. (I don't sugest people click on the story, because Horner will just make more money because of his false story)
Here is a screen-shot. (Notice he has recently changed the posting-date from March, to Nov. 11) 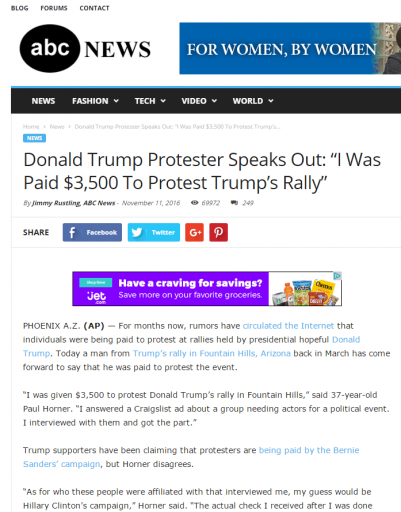 Horner also posted a fake Craigslist ad for "paid protesters", to help verify and bolster his fake news story.
Paul Horner is well-known to Snopes for other fake news created in the "National Report".


National Report
"No list of shameless misinformation would be complete without a mention of National Report (and its omnipresent former lead writer, Paul Horner), as the site is (or was) perhaps the most prominent example of its genre...."
http://www.snopes.com/2016/01/14/fake-news-sites/

A web posting headlined, "Donald Trump Protester Speaks Out: 'I Was Paid $3,500 To Protest Trump's Rally,' " ranks high on Google searches for the phrase "paid protesters." But the article is 100 percent fabricated, as its author acknowledges.
http://www.politifact.com/truth-o-m...eone-wasnt-paid-3500-protest-donald-trump-it/

The Washington Post has an interview with Horner, and he admits to his fake news stories.....(exerpt)


(WASINGTON POST) You mentioned Trump, and you’ve probably heard the argument, or the concern, that fake news somehow helped him get elected. What do you make of that?
(HORNER) My sites were picked up by Trump supporters all the time. I think Trump is in the White House because of me. His followers don’t fact-check anything — they’ll post everything, believe anything. His campaign manager posted my story about a protester getting paid $3,500 as fact. Like, I made that up. I posted a fake ad on Craigslist.
https://www.washingtonpost.com/news...ld-trump-is-in-the-white-house-because-of-me/

Some of these Craigslist ads were real and were for paid phone solicitors (or canvassing), which were then misinterpreted and believed to be part of the above Hoax story.The fake Craigslist ads for "paid protesters" in various cities, have been since deleted from Craigslist.

It's rather silly idea anyway. There would be no need to "pay" anti-Trump protesters....there are enough of them already.
Last edited: Dec 1, 2016

Leifer said:
Here is a screen-shot. (Notice he has recently changed the posting-date from March, to Nov. 11)

As if there weren't enough clues that this is a fake story, check out the byline. "Jimmy Rustling"? Yeah, I think not. 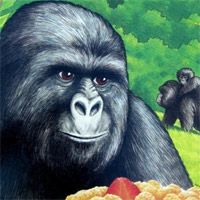 Trailblazer said:
As if there weren't enough clues that this is a fake story, check out the byline. "Jimmy Rustling"? Yeah, I think not.

Everybody got their jimmies rustled this election cycle.

Here's some more timeline background on how the general idea of "paid protesters" story gained legs and social media traction....as early as April, 2016.

Former Nixon aide, Trump supporter, and Drudge Report plus Breitbart author... Roger Stone.... made contact with Alex Jones to claim that protesters were planted at various rallies and events, to create "false flag" events, orchestrated by the Hillary camp.
Here's in interview back in March, with Alex Jones...
https://www.facebook.com/AlexanderEmerickJones/videos/10153989651258459/

Leifer said:
It's very difficult to confirm such accusations especially when Stone (and others) refuse to reveal any sources....or provide evidence before or after the event(s). It should be the responsibility of the accusers to show their evidence, not the responsibility of the accused to defend themselves based on opinions and secret-sources levied by their accusers
Click to expand...

Fortunately... or unfortunately depending on your needs... Sources dont have to be identified, as a way to protect them and allow them to continue to remain to be sources. My understanding is that its a clause in law designed to prevent intimidation should the prosecution or defense feel that the source is the linchpin in the oppositions case.

This is good and bad. Its good, because sources can remain anonymous, but is bad in the fact that (as Leifer pointed out) theres no way to verify the validity. People can just say "I know a guy who gave me this information."
It would be nice if the media were held to the same standard of proof and evidence that are required in court, but I doubt thatll ever happen. Personally though, anything that has an 'anonymous' source is ignored until such time as I can find other evidence to support the claim. It's kind of a double standard because I have friends in the gaming industry that give me information, from time to time, about games they know Im interested in. I cant EXACTLY go to a gaming media site and provide them information, because a) itd be violating my friends' trust, and b) there'd be no way for them to vet it out.. so there's a HUGE potential to end up with a No Man's Sky or Halo 3 type situation.

There are ways to reveal evidence, without revealing sources.
For example.....if the accusers had said something like, "my sources informed me that xxxxxx happened two weeks ago, and here is the evidence that xxxxxx truly happened, two weeks later".
You must log in or register to reply here.