These are legit photos taken recently by a lifelong friend with a very high level job in astrophysics. I have had to sit on them for days but I have finally been given permission to post them provided I don’t reveal anything about the person in question, in particular where they work or for whom. It is worth adding, my friend is NOT a UFO believer but in this case they cannot identify this very large object moving at VERY high speed in space. We have been arguing about the existence of UFOs for decades (literally) so you can imagine my surprise when I received them from this person a short time ago. Enjoy

The three images posted are inverted (normal for some type of Astrophotography), and are attached here.

There are various other clues. In the lower-left quadrant the size of the field of view is specified - it’s about 28 arc minutes, or roughly the diameter of the moon. The date is specified in the upper-right corner, as are the coordinates towards which the telescope is pointed, 21h47’, -19d57’. I think this would be approximately in the direction of southern eastern Capricornus, without checking a star map. Hence the camera is pointed roughly directly opposite the sun.
The labelled objects are all asteroids, using either the provisional designation (like 2015 XS202, near center) or the permanent designation (just a number, like 432555 in upper-left quadrant). Software has been used to plot the positions of these objects upon the photograph. These are all very faint objects and may not actually show up in the photograph.
The photographer was apparently intending to photograph asteroid 2022 ON5, as indicated in the top-left corner. This would have been a very recently-discovered object as indicated by the provisional designation. Hence they were probably taking photographs to further refine the new asteroid’s orbit - the more measured positions of the object, the better will be the calculation of its orbit.
I think the photograph was taken at 'Skygems Namibia Remote Observatory', as designated by the station code 'L81' at lower-left (just below the blurred-out observer name). This is a public-access observatory with which anyone willing to pay for access can take photographs with a nice camera-telescope setup. I find it slightly odd that an 'astrophysicist' would be using such an instrument, but not inconceivable, I suppose.
More specifically, the "Tel" designation at lower left: "0.51m f/6.8 CDK" appears to refer to the first telescope show on this page:
https://skygems-observatories.com/
Note that the MPC observatory code listed for that instrument "L81" matches the photograph (as do the other three Namibia telescopes), but this is the one with a 6.8 focal ratio (3403/500 = 6.8).
It should be noted that the direction towards which the camera was pointed - approximately directly away from the sun - is one of the most "heavily-patrolled" by astronomers, since this is the direction towards which asteroids will be at their brightest, being fully-illuminated and on average closest to the Earth in their orbits. Hence if this was an object in space I would think that it would be detected by a great many other telescopes - particularly if it were a third of the apparent diameter of the moon, as this object appears to be.

The telescope seems to be tracking one star asteroid (2015 XS202), and so is moving between exposures. A speed is given in the top left as 2.68" per minute (2.68 arc seconds per minute), not sure what that refers to.

My initial suspicion is that it's some kind of lens flare from a local light, and the movement is from the telescope moving, and hence the angle changing.

So really we'd want the actual images, not screengrabs from a computer.

Also if its black is bright, like the stars in the attached images, if a real thing his would be a large luminous object, like a portion of the moon moving through space.

jarlrmai said:
a large luminous object, like a portion of the moon moving through space.
Click to expand...

If the width of the image is correct, it's too small to be the moon. I guess the size might match a portion of the moon... but that just raises MORE questions!

jarlrmai said:
So really we'd want the actual images, not screengrabs from a computer.

Also if its black is bright, like the stars in the attached images, if a real thing his would be a large luminous object, like a portion of the moon moving through space.
Click to expand...

And as they're stacked, and it's moving, would it be too much to ask for all 18 of the original originals?
My money at the moment, given the curved edge, would be on it being this kind of internal reflection glare 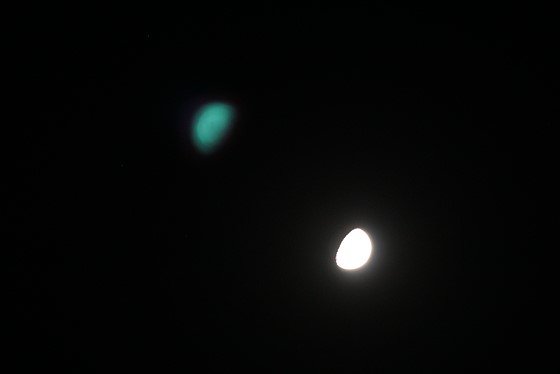 (from https://www.dpreview.com/forums/thread/4152632 )
You must log in or register to reply here.