A prediction from theory

qed said:
You are correct and I was wrong. He was never an 'original suspect'.

Thank you for calling me on this.
Click to expand...

So what about my buddy who says the injuries were 100% real? Somebody paying him to say that?

Banned
The injuries on the older brother are probably due to his little brother running him over and dragging him with the SUV.

Adding, I would have loved to see the look on his face when he was told he was probably the cause of his brothers death. 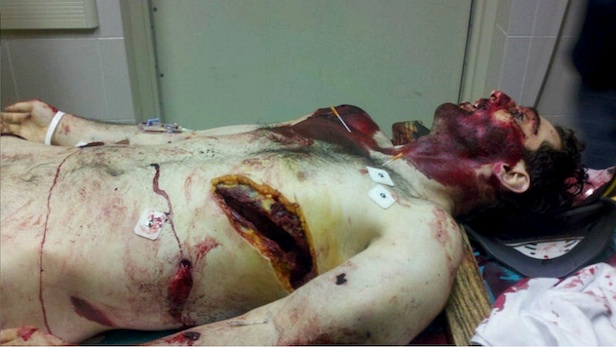 Seeing a photo of one of the Marathon bombing suspects dead was cathartic, said one law enforcement official who saw the picture.

Passing it around was a rare chance “to revel” while other officers searched for Tsarnaev’s brother, Dzhokhar, the official said. “Mission accomplished. We’re halfway there. Justice is served.”

I'm not understanding your point of this response. a messy afterpic doesn't make the killing brutal. and frankly that pic doesn't look that gruesome at all.

deirdre said:
I'm not understanding your point of this response. a messy afterpic doesn't make the killing brutal. and frankly that pic doesn't look that gruesome at all.
Click to expand...

I take your point and retract that assertion.

Under the assumption that the boys had killed a police officer and that Tamerlan had fired upon police officers, there is nothing excessive nor brutal about the manner in which he was apprehended.

qed said:
A cornerstone of a valuable scientific theory is the ability to make predictions. I have a theory of what happened in Boston, gleaned from the ample visual material. Rather than waste our time debating this theory, I am going to make a prediction, and if this prediction fails, I will reject the theory. This prediction is so outrageous, that if it comes true, you must take seriously the theory.

The case is soon to be heard in a civil trial (i.e., a trial by a jury of peers, as in Law and Order). The evidence of the state will be available to all. Jeff and the Corcoran's will be questioned by the defense. I expect Dzhokhar will receive excellent legal council.

If my theory is valid, this trial cannot take place as afore described.


I request that we just let this thread sleep until after the trial or my prediction comes true.

Attempting to outline my theory will demand debate, and so I won't. For anyone wishing to investigate around this topic, I suggest, The Center for an Informed America and NoDisinfo, both of whom make such (potentially) libelous assertions that they will be sued to high heavens by American heroes, if the theory is wrong (libel being the proof tool of investigative jounalism).

I have no problem turning out to be wrong, and I assume so do you.
Click to expand...

The trial is ongoing at the moment but no sign of it being assigned to the military. What are your thoughts?

That the trial has gone ahead disproves the theory. I reject the theory. If the theory was true the trial could never have made it so far.
You must log in or register to reply here.