On 4 August 2020, multiple explosions occurred in the city of Beirut, the capital of Lebanon.[1][2][3] The blasts occurred at the Port of Beirut and left at least 100 people dead (with the total expected to rise further), at least 4,000 were injured, and many more are missing.[4][5][6][7] Many thousands have been left homeless.

Beirut has been rocked by a massive explosion in the city's port. Rescue efforts are ongoing, but the interim reports state that the death toll is at least 100, with thousands wounded.

While initial reports focused on fireworks present at the area, Lebanese authorities have now stated that the blast was caused by 2750 tons of ammonium nitrate fertilizer stored at the docks. Ammonium nitrate is extremely commonly used as fertilizer, but due to its chemical properties can easily become explosive. Ammonium nitrate mixed with fuel oil - abbreviated as ANFO - has been used in prominent terrorist bombings, most notably the Oklahoma City bombing. It is also very capable of becoming explosive when heated.

Initial speculation on Twitter/Youtube includes accusations of nuclear attack similar to the accusations leveled for 9/11 and Tianjin, though Twitter is now publishing refutations to this. There has also been various accusations levelled against Israel, obviously due to the tumultuous nature of relations with Lebanon.

Sky News Australia has also run an expert interview where it was claimed that the explosion was 'clearly bomb-making related'.

Trump also seems to think its was an attack

This photo is making the rounds this evening on Telegram. Appears to show numerous parcels of bagged Ammonium Nitrate. Was going to write this off as horse #hit, but those are the exact same warehouse window. 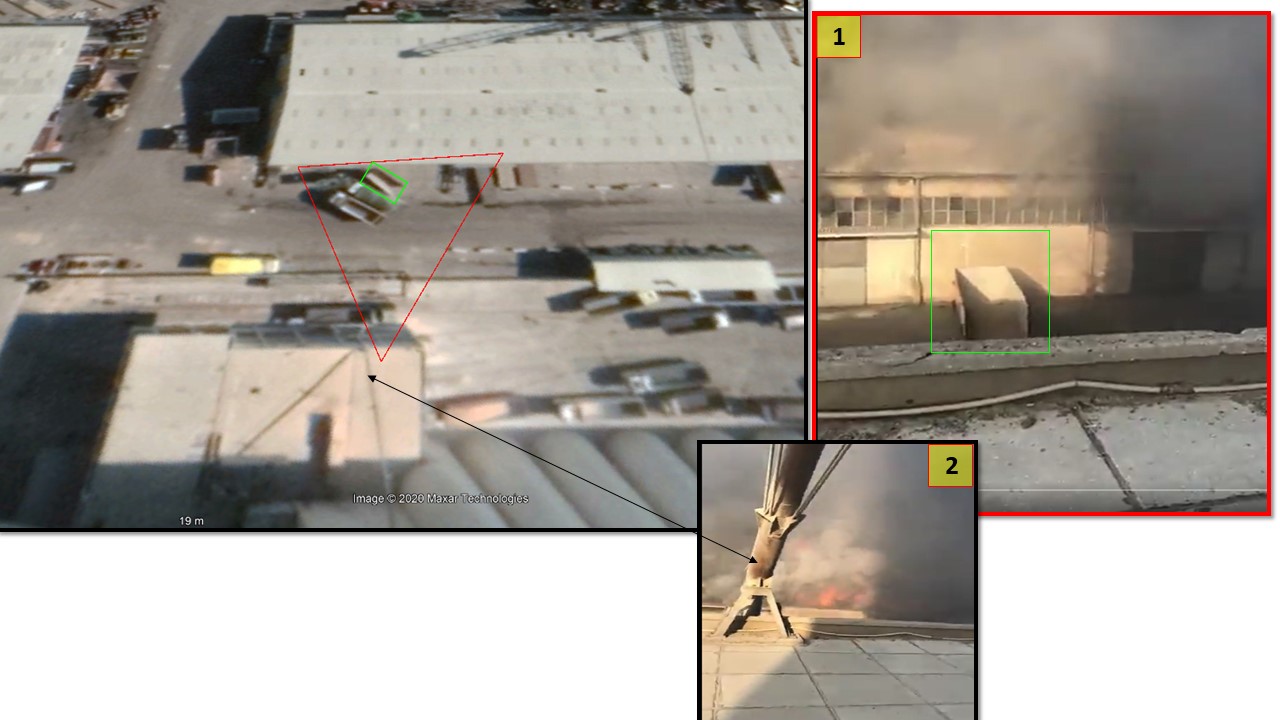 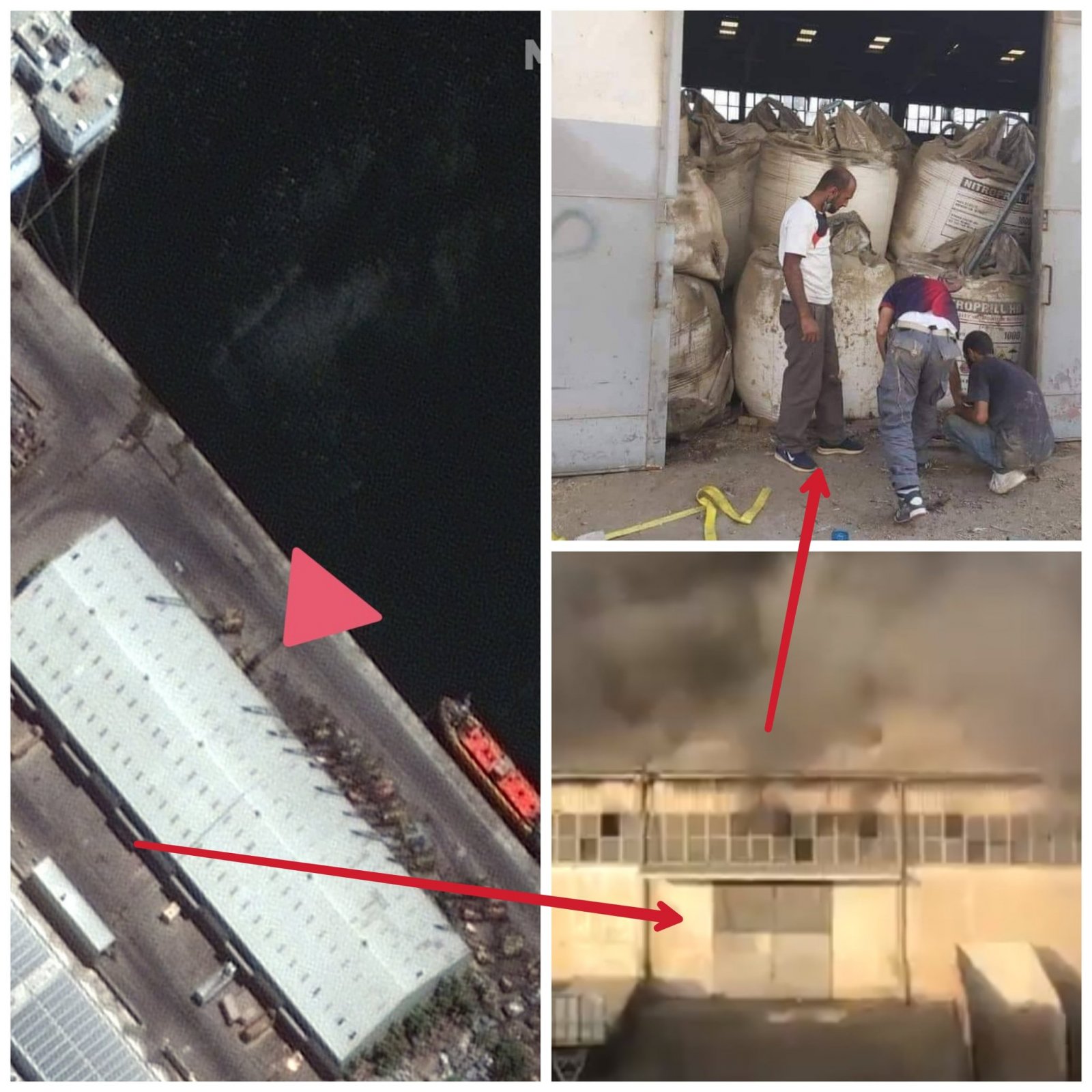 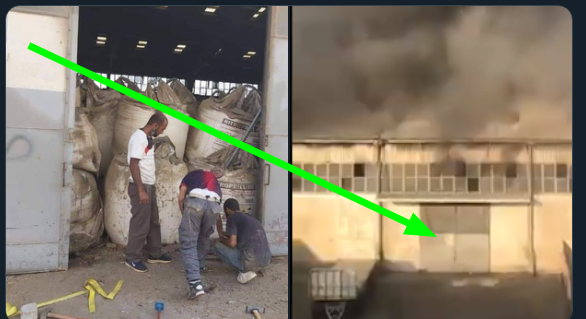 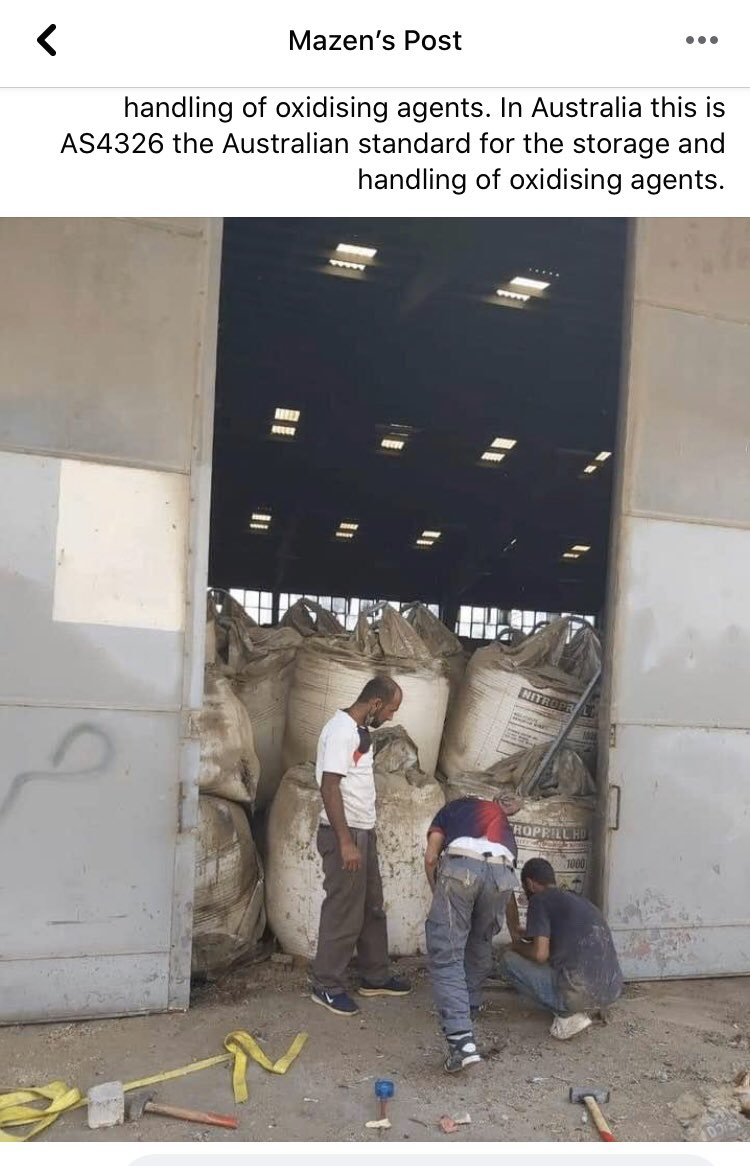 without knowing for sure,, the banging in this vid is the alite fireworks and this cascaded to ignite the fertilizer

Claims of no crater or birds being missile are being made 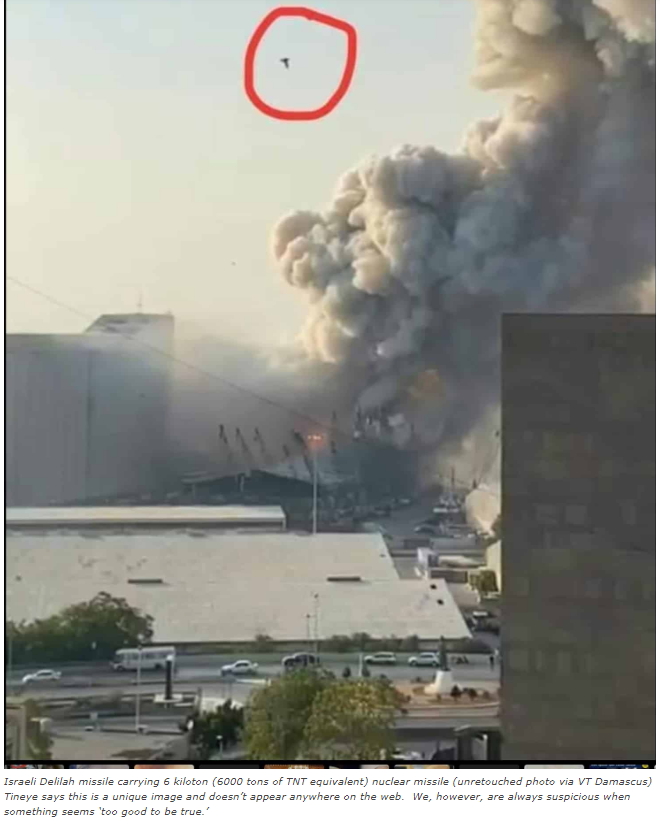 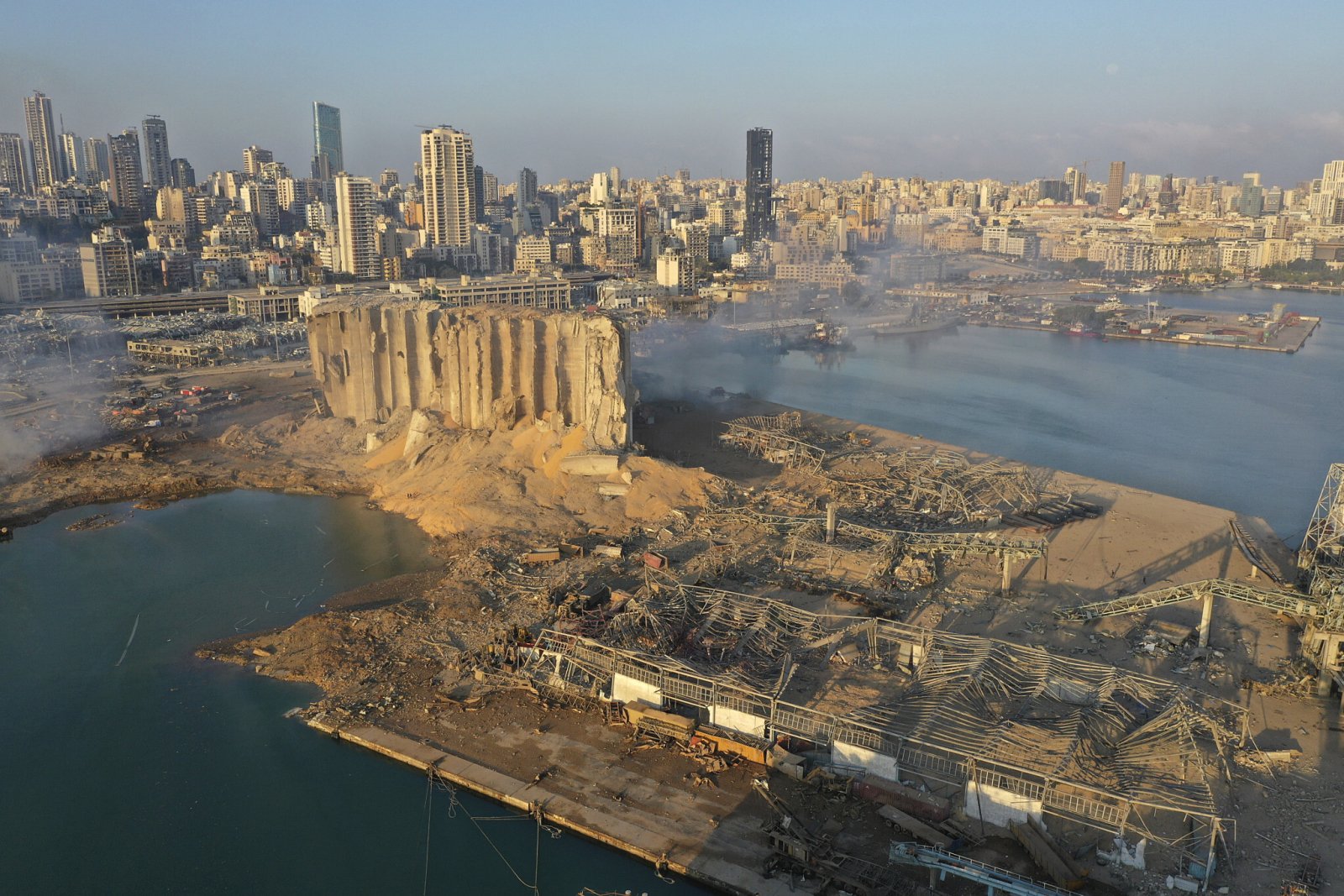 You can't make this stuff up. The warehouse stored ammonium nitrate from an abandoned ship and a stockpile of fireworks, and the explosion was set off by welding that was meant to shut holes in the warehouse.

In 2013, the Rhosus, a Moldovan-flagged cargo ship, was transporting ammonium nitrate from Georgia to Mozambique when it experienced mechanical problems and entered the port of Beirut, according to a 2015 note written by lawyers for the ship’s creditors. After inspection from port authorities, the ship was prohibited from sailing. At this point, the ship’s owner, Igor Grechushkin, a Cyprus-based Russian national, abandoned the ship and its cargo. The Rhosus’ Russian captain and four Ukrainian crew members were left on board with no pay, no way to get to shore due to immigration restrictions, sitting on top of a highly explosive cargo. “The vessel quickly ran out of stores, bunker [fuel] and provisions,” wrote the attorneys. In the meantime, “efforts to get in touch with the owners, charterers and cargo owners to obtain payment failed.”

After almost a year, a judge granted the crewmembers permission to disembark and return home. The lawyers wrote, “owing to the risks associated with retaining the Ammonium Nitrate on board the vessel, the port authorities discharged the cargo onto the port’s warehouses. The vessel and cargo remain to date in port awaiting auctioning and/or proper disposal.” Six years later, that cargo may have caused a catastrophe.

In the aftermath of the devastating explosion in Beirut on Tuesday, Lebanon’s official corruption and the dire state of the country’s institutions are rightly being blamed for the horrific and bizarre set of circumstances that appear to have caused the disaster. A lot is still unknown but the emerging narrative, according to official statements, is that welding work set off a stockpile of fireworks, which then caused the more than 2,700 tons of ammonium nitrate stored at a nearby warehouse to explode. Based on the timeline, this is most likely the cargo taken off the Rhosus.


Beirut officials have estimated damages from a deadly blast in Lebanon's capital to be between $US10 billion and $US15 billion ($13.8 billion and $20.8 billion), as new drone and satellite images show the area surrounding the blast flattened and smouldering.


Images from before and after the explosion show a once-thriving club and dining district shrouded in broken glass and debris, while damage to buildings can be seen extending several kilometres away throughout the city

The explosion damaged Beirut's Christian quarter and killed the secretary-general of Lebanon's Christian Kataeb Party.
Some right wingers were quick to blame Hezbollah.

While what triggered this catastrophe is unclear, we do know that Hezbollah warehoused nearly 3,000 tons of ammonium nitrate in the midst of its longtime enemies in the Christian community. The jihadists knew full well the danger: They had used this highly explosive substance in successive, murderous terrorist attacks.
As the world mobilizes to provide humanitarian relief to Lebanon, it must go to the victims, not empower or legitimate the jihadists responsible for their suffering.

Locals were "shouting chants against the political establishment and endemic corruption" when President Macron visited and "promised angry Lebanese crowds in shattered Beirut that aid to rebuild the city would not go to corrupt hands."
https://www.yahoo.com/news/macron-promises-angry-beirut-crowds-091132506.html

Staff member
I assume this is an edited video? Certainly gives that impression, and you would assume that if it was real it would have been huge news! Source: https://twitter.com/stratton74/status/1292843900357488643

Staff member
Yeah, the missile videos all appear to be edited versions of existing videos that don't have missiles.

The West Texas explosion involved just 240 tons, with another 55 tons of reactive precursor compounds and was already devastating.

There's really not much to compare this explosion to in the sub-nuclear range*. The only real comparisons to this are the Texas City disaster (3000+ tons of ammonium nitrate, but in two explosions a day apart) and the Halifax explosion (munitions explosion in a harbor).

The Ocean Liberty might have been a bigger explosion (3300 tons of AN) but they managed to tow it out of the harbor to mitigate the damage.

The pictures of that warehouse (that's a generous term, more of a large pole barn!) are a safety inspector's fever nightmare. I can't think of anything that could have been done more wrong without putting an ashtray next to that door. And it was like that for SIX YEARS before the inevitable happened.


*-and it *is* definitely sub-nuclear. Nuclear fireballs are very unreal to see, even ones smaller than this like Upshot Knothole, the initial flash seems to last impossibly long and after it fades an eerie blueish glow is left as ionization and induced radioisotopes in the air decay back to their normal states.

For comparison purposes. Is it a reasonble assumption that the absence of the visible shock wave has to do with the likely differences in relative humidity between Beirut and the Nevada test grounds? But the bright flash effect that I understand to be characteristic of a nuclear explosion is visible. The explosion happens at around 1:46, if your interest in seeing an old documentary about a nuclear test is limited...

(If that's not how I should have linked that, somebody yell at me -- if I'm not punished, I'll never learn!!!!)

Davey Crockett's yield was barely above the fission floor at 10 tons (no kilo or mega, here, 10 actual tons TNT equivalent), which is lower than a few conventional bunker buster bombs like the MOAB at 11 tons. Humidity might play a part (Lebanon is not exactly wet either) but it's probably more to do with how small the explosion was.

For comparison, 2750 tons of TNT is (at the usually cited rate of 2.38:1) around 1.15 kiloton TNT equivalent. The Lebanese Supreme Defense Council cited the yield as equivalent to a 1.8 kt nuclear bomb, which might be looking strictly at kinetic output (yield counts all energy output, a nuclear weapon emits more thermal energy than a conventional one, not to mention electromagnetic and ionizing radiation), or might be based on other materials in the warehouse - we know there were also fireworks, for example, but not how much gunpowder there actually was.

Short 3 minute Interview with the captain of the ship that got impounded with all that ammonium nitrate. He says how it was impounded and that he knew the cargo was dangerous and told the Beirut authorities such. Seems they didn't heed his warning. He also had to sell some of the ship fuel to pay for a lawyer to get the crew back to their home countries

Hevach said:
Davey Crockett's yield was barely above the fission floor at 10 tons (no kilo or mega, here, 10 actual tons TNT equivalent), which is lower than a few conventional bunker buster bombs like the MOAB at 11 tons.
Click to expand...

Hevach said:
Lebanon is not exactly wet either
Click to expand...

Yeah, I just wondered whether humidity at the port, hard up against the sea, might be higher than in Nevada. Or not much, maybe, depending on wind direction.
J

well, according to the handy-dandy search engine, I come up with humidity/dew point that's not any different than Phoenix right now. Does that make a difference?

Cheers - Jon N7UV
You must log in or register to reply here.