Zim Shipping Company "Did you know" photo I found from FB 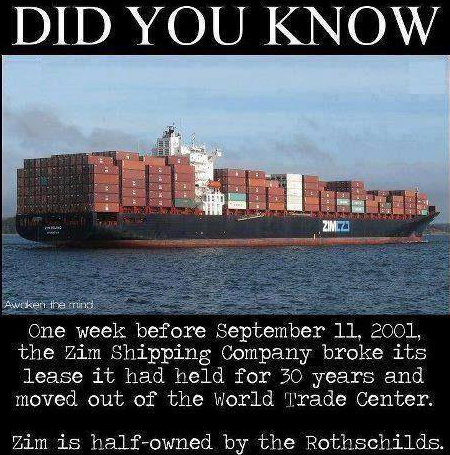 Can this be debunked?

There's a bit here about it -
http://www.911myths.com/html/zim_shipping.html

They didn't 'break' their lease.

Some sites like to make this sound as though Zim left in a hurry, perhaps unexpectedly, and it’s claimed they broke their lease. No source is ever provided for this suggestion, though, and other accounts say not. ...their rental lease contract with the Port Authority expired on September 1. Still, Zim Israel had kept a small office behind in the World Trade Center, an office which consisted of their computer shipping tracking equipment. All of the computers were destroyed in the 9/11 attack and Zim's operations were actually down for a short period.
...
And the “sudden” move? Not so sudden. The President of the company said “initial planning for this move began as part of a Go Forward Plan initiated almost two years ago”. It had been announced the previous April that they were going to relocate to Norfolk, Virginia, in April 2001.

The ZIM claim was initially made in an article at "American Free Press", successor to The Spotlight. You can't get the original article from AFP anymore, as Bollyn was fired and all his articles deleted when he began claiming that AFP was a Jewish/Zionist front group.

The ZIM claim was initially made in an article at "American Free Press", successor to The Spotlight. You can't get the original article from AFP anymore, as Bollyn was fired and all his articles deleted when he began claiming that AFP was a Jewish/Zionist front group.
Click to expand...

Original here - looks like an anonymous source is the only "evidence" here.
https://web.archive.org/web/2003060...reepress.net/Mideast/Who_Knew_/who_knew_.html (http://archive.today/LWxFz)

AFP has learned from a reliable source in the shipping industry that Zim American Israeli Shipping Co., Inc. broke the lease when it vacated the rented offices on the 16th and 17th floors of the north tower of the World Trade Center shortly before the Sept. 11 disaster.

According to the source, Zim’s WTC office space had been leased until the end of the year and the company lost $50,000 when it suddenly pulled out in the beginning of September.