Dane Wigington asserts is this live presentation that "commercial aircraft have been tracked spraying heavy metal particulates", but believes that pilots and airline personnel have no idea that the aircraft they fly and maintain are equipped with automated spraying systems.


Max Bliss is convinced that low cost airlines such as Ryan Air are supplementing their incomes by closing off one of the cargo compartments in their 737-800's, inserting a tank and plumbing into that compartment which will pump chemicals to a point aft of the engine.


These two claims are inter-related as they, if they are true, require the complicit behaviour of a myriad of airline staff, something that Wigington claims isn't happening and something that Max Bliss with his offers of "amnesty" to whistleblowing pilots obviously does.

Of the competing claims, Max's makes slightly more sense; if it is happening then it must be under the watch of not just pilots but Licensed Aircraft Engineers, load officers (who make sure the aircraft is loaded in accordance with weight and balance limits), Flight planners, ( who must take into account the weight of the aircraft at all stages of the flight), Baggage handlers (who must know that the available space on their aircraft to put bags has been reduced by 50% or more.

Add to that the various levels of airline managements who must comply with a legal document called an Airline Operators Certificate, which can be withdrawn at any time for breaches of the rules, plus operational management pilots who oversee the operations of their various fleets and who act in accordance with a country's Civil Aviation legislation. Lets not forget upper management/Board who are legally responsible for breaches of the various Civil Aviation, financial management/reporting and environmental laws in countries around the world, which carry heavy jail terms for convicted offenders.

We can take it as read that upper management must know of both the existence of any supposed program, it is impossible not to.

Why must the front line staff know? There are many very good answers but to my mind, the "Best short answer": The weight and balance issue.

Aircraft are operated to a weight and balance regime that has been cleared by a comprehensive flight test program by the manufacturer and certifying agencies such as the FAA. Graphic evidence of gross balance issues on an aircraft was recently seen by the crash of the 747 freighter in Afghanistan that was captured on video.

This particular video provides an excellent analysis of what can happen when an airliner has a C of G problem and correctly states that gross errors are more likely to happen on freight aircraft than passenger, although they have happened.

The following statement is as near to a universal aviation truth as it is possible to achieve:

For the safe and efficient operation of an aircraft, the pilots MUST know the weight of the aircraft, to a fine tolerance, at all times.

I include a list of links of some aviation occurrences that illustrate the dangers of pilots not knowing the correct weight of their aircraft, and the possible consequences. It is by no means an exhaustive list.


It affects the following safety critical aspects of operating a heavy jet:


I am sure the other pilots on this forum can contribute other weight critical operations of airliners. A pilot gets those things wrong in a serious way and people get killed. No amount of rationalising from those desperate to push a lunatic theory can change that.

Max has developed a theory so lets explore it in a bit more details. To do what he claims lets go through the list of front line staff of , in this case Ryan-Air, and what they would have to do to be in on his theory.

Aircraft engineers must:
Aircraft load officers must:
Check in Staff must:
Baggage handlers must:
Further to the weight issue:


The video was chosen because:
All three of them said it was "clearly a massive chemtrail". They also had no argument it was a commercial aircraft.

The flight was the QF 64 regularly scheduled service from Johannesburg, South Africa to Sydney Australia. The particular aircraft was identified as VH-OJP, a 747-438 with a max takeoff weight of 387.2 tonnes.

At the start of the video the Flightradar24 data shows the aircraft travelling at approx 1040 km/hr. It was difficult to determine exactly how long it was visible to Kusnzir but if we use a conservative 10 minutes to go from horizon to horizon, the trail was at least a conservative 150 km long. The video also shows a conservative width of 100 metres and a depth of 10 metres can be applied if we are attempting to get a volume of the trail in cubic metres. The answer comes to a trail containing a volume of 150 million cubic metres.

Obtaining the weight of the chemtrail becomes a matter of deciding what concentration of "aluminium oxide" was used, and applying the specific gravity of Aluminium oxide...between 3.7 and 4 depending on what you read.

Contrail studies have confirmed that a CONtrail contains ice particle concentrations of 10,000 particles per litre. Applying a similar concentration to aluminium oxide yields an enormous figure. Even being gentle to chemtrail believers and using a concentration of one part in 1 million yields a weight far in excess of the maximum weight of a 747.

IT IS SIMPLY IMPOSSIBLE FOR THAT TRAIL TO BE WHAT THEY CLAIM IT IS.

When asked about this, Tanner went on a Gish Gallop that did not address the issue and reiterated his usual BS about being able to smell nano-particles dropped into the atmosphere at 35,000 feet and miles from his location. He also denied that water is a byproduct of hydrocarbon burning on the basis that "he doesn't see water coming out of aircraft that are taxiing". I don't know why the more intelligent chemtrail believers never call him on out on these claims. They are patently absurd.

Max Bliss has developed his theory based on the fact that low cost carriers need extra revenue and hence will participate in chemtrail activities. He freely admits he doesn't know much about aviation and from the corrections he has applied to his video, this is painfully obvious. My advice to Max is to leave the technical sleuthing to people more qualified than a brick-layer, you'll end up looking less silly.

As far as Wigington is concerned, his attempt to link every proven environmental issue to Geo-Engineering, reeks of desperation. He is also not in any way acquainted with Aviation and it shows. Mick has already covered most of the other issues in this video... some of the frauds committed in it are amazing.

From now on if Russ Tanner, John Massaria or Madisonmoon Star claim that alleged "Chemtrailing" is unmarked NATO aircraft or military aircraft, or Tanner claims he never believed that water was not a by-product of hydrocarbon combustion, please reference this link, which I have kept a copy of.

I would have cut Russ Tanner off sooner, but you were hard to hear.
The other callers were more legible to the ear. What microphone/headset are you using ?
You want to be most legible around the 1kHz to 5kHz voice audible region.

One other issue pertaining to these claims is that sometimes aircraft are diverted to locations which were not originally scheduled, where they might be required to undergo inspection or repair. Even if dozens or more pilots, ground crew and managers were tightly controlled enough to maintain secrecy within the scope of their operations, there would always be the risk of an unavoidable breach of their control allowing new eyes looking at these planes where the scheme would inevitably be exposed.

Additionally, airlines compete against each other. If even one hint of such a scheme were to emerge, an airline could literally end the operations of their competitor within the hour by blowing the whistle.

Lastly, some workers will always have grudges against each other or even against their employers, they compete for advancement, they get fired, they retire. If even one employee broke silence to gain some revenge or advantage , the whole scheme would be over.

The odds of any of these things happening increases every minute such a scheme would exist, involving an ever-wider ever-expanding number of people and opportunities for exposure.

The odds of maintaining such secrecy for over a decade under such conditions are too great for any such plan to ever succeed or even be attempted.

Those of you involved in the industry, please correct me or add anything I may have missed regarding this point.

The tube behind the exhaust at the start is the "aft fairing drain" - see it towards the bottom of this page - http://www.b737.org.uk/powerplant.htm

And the "mixing tube" below that APU in Bliss's video is the trail strike indicator - see http://www.b737.org.uk/tailskid.htm

There's a 737 "walk around" her that covers all of this nonsense: http://www.b737.org.uk/walkaround.htm

Wow. Hard to have a conversation with someone when they just shout you down. The word "rabid" came to mind while listening to that. Anybody have a comment on the accusation made about Metabunk allegedly misquoting Wigington?

My comments about the nature of the drains and a couple of other things have not been approved on the original video - they were factual, to the point, and suggested searching for various terms in order to find appropriate references.

Hama Neggs said:
Wow. Hard to have a conversation with someone when they just shout you down. The word "rabid" came to mind while listening to that. Anybody have a comment on the accusation made about Metabunk allegedly misquoting Wigington?
Click to expand...


Yes, I want to discuss that a bit. Russ Tanner is talking about this post https://www.metabunk.org/threads/gl...all-included-call-for-funding-shoot-down.944/ where Jay says:

Jay Reynolds said:
This was very hard to hear, but it happened. Someone made a suggestion that funds be used to buy planes to protect our airspace and blow those planes out of the sky", Dane Wigington said, "We all feel that way."
https://www.metabunk.org/posts/20478
Click to expand...

I have continued my comments in that thread.
Last edited by a moderator: Nov 20, 2013 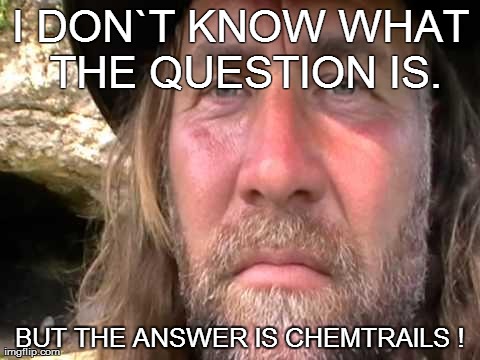 H
What is that thing on the ground?