Unreported Abuse of US Troops

From geoengineeringwatch.org in time for Memorial Day.

Willful blindness to the criminal actions of your country is not patriotism, it is tyranny. Any that are living under the delusion that our government is in any way concerned about them, their lives, or the lives of our brothers and sisters in the US military, are unimaginably disconnected from reality. The public has been very successfully programmed by the power structure controlled corporate media to blindly support the actions of the criminal cabal that masquerades as legitimate government.


I want to nitpick a bit first over wording. I am not sure what Dane Wigington means when he refers to “willful blindness” as “tyranny” in the passage. It looks like the public is not a victim of programming by the power structure, but an accomplice to it. Wigington is preaching collective guilt.

Let’s see if his assumption is true. The corporate controlled media has led to blind obedience regarding treatment of the military.

I found this story in the New York Times, a classic example of corporate controlled media according to Wigington, just yesterday.

I liked the last two concluding paragraphs in particular:


There might very well soon be military funerals with headstones that read 1998–2016. Similarly, for those returned safely home, Congress — about 20 percent of whose members are veterans — seeks to cut funding to portions of the new G.I. Bill and to cut military housing allowances for those on active duty.

But when the next military intervention is announced, or when the next cut to veterans’ benefits emerges, you’ll see it packaged as some way of helping our veterans and our military. There might even be some veterans standing behind the speaker, forever symbolic, in whose name any vulgarity can be sold.


Not what I’d call blind obedience.

More to the point, stories regarding the abuses suffered by the U.S. military have a very long lineage. Problems within Walter Reed Hospital dominated headlines in 2007.

and National Public Radio, a great example of “government-controlled media,” in Wigington’s world. 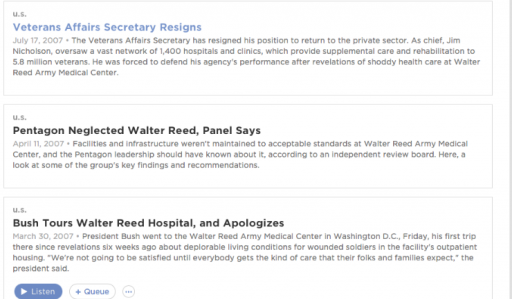 The Veterans Administration currently dedicates part of its website to veterans who were exposed to toxic material produced by military “burn pits” in Iraq and Afghanistan.

Problems related to Gulf War Syndrome have been extensively covered by the news.

Or, if you want to go further back, veterans have also filed class action lawsuits for exposure to radiation during the forties and fifties.

The list goes on, but I think that I made my point.

Americans have been well aware of mistaken or poorly constructed policies that have affected thousands of service members over many decades. Public outrage has resulted from scandal and, in many cases, reform has been one result, although not as consistently as necessary.

Dane Wigington misses a great deal looking at the world through his CT blinders.
You must log in or register to reply here.

Why Doesn't The Military Shoot Down UFOs/UAPs in Military Airspace?