It is observed fact which should be agreed that the progression stage of Twin Towers colapses was at, in the order of, 2/3rds "G".

That is true whether or not there was any CD or even any need for CD. The question of "CD or not" has no effect on the OP topic. The reasons for the 2/3rds"g" are, or should be agreed as:
1) The falling debris fell down the spaces - the "Open Office Space" of the Tube in tube design plus the analogous spaces in the core.
2) Thus the debris missed the columns which offered no significant resistance to the falling debris;
3) The main source of structural force resisting the collapse(s) was from shearing of joist to columns connections as shown bt this graphic: 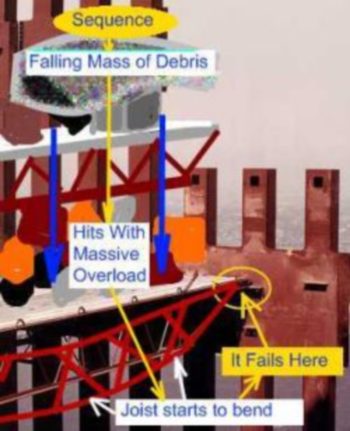 -- the same situation at the other end of the OOS joists and the analogous situation causing shearing of floor beams in the core area.

Those shearing forces were far less than the dominant "force" causing the "missing" 1/3rd "g". Which was the force involved in increasing momentum as additional debris was added as successive floors were disconnected from columns.

EDIT: I note that @Landru has drawn attention to the topic - we "crossed in posting".

It proves nothing about CD. Despite the often claimed truther's false mantra that "Free Fall proves CD". It doesn't. Neither does Free Fall ACCELERATION if we avoid that secondary confusion.

Free Fall is a feature that may be apparent in a collapse mechanism. It is a feature of the mechanism - not of what triggered it. The starter's gun doesn't win the race.

ParadoxicalKat said:
You will have to support your claim with evidence/citations from reputable sources.
Click to expand...

Give them a good read - you'll notice that a lot of them clearly include comments to the effect that eyewitness testemony is a weak form of evidence, often unreliable, etc., but that's not the point - we know that, we accept that, and we also know that the courts know that and accept that, but they still accept witness testimony as evidence. You're applying a binary evaluation to something that doesn't have a simple value. The evidence for CD (e.g. the firemen talking about the sequence of bangs, the sequence of blasted-out windows down the floors) can easily be interpreted as evidence for the early "pancaking" stages of runaway collapse. That's why you also have expert witnesses who can explain how what was perceived and described may have been misinterpreted. And even the expert witnesses testimony isn't to be taken as an absolute truth - often expert witnesses will argue opposite points of view. In such a case, one of them must be wrong, yet both testimonies are admissible.

ParadoxicalKat said:
It's evidence that someone claims to have experienced something, not evidence that it happened.
Click to expand...

The testimony will *necessarily* contain the witness' *interpretation* of what they perceived, we know this. A good cross-examiner will try to get the witness to identify why that particular interpretation was made rather than alternative ones. For example, an unfamiliarity with even the concept of the more likely sequence of events will imply that the testimony will not be considered as particularly strong evidence for the alternative interpretation, as there was not even the ability to evaluate whether it was a better interpretation than the more likely one.