"The Chemistry in Contrails" - paper

Surprised this hasn't been covered here before. Seems to jump to a lot of conclusions without evidence, but, some interesting points:

"From the historic development of geo-engineering techniques the mixture of both amorphous and mono-crystalline Al2O3 and mono-crystalline (Ba, Srx)TiO3 can be derived as the three most common compounds. But these crystalline particles do not show up in standard chemical analysis, unless one uses hydro-fluorine acid, which is hardly ever the case. Regarding the fact that these crystals are manufactured on-board in spray-pyrolysis within the jet engines, the widely measured fingerprint should be understood as the rejects of the Al2O3 production as well as the of the (Ba, Srx) TiO3 nano-particle production, or as deriving from additional chemicals that could not be identified yet."

"On one hand the link of retarded plant growth and elevated values of barium and strontium as reported by other environmental groups could be confirmed. Regarding the mechanism of bio-accumulation the content of heavy metals was in a range to be considered as being dangerous to mammals and humans. Still, compared to countrywide values and experience with heavy metal pollution from the early times of industrialization as well as the acid-rain area in the 70s, the total values of aluminum, barium, strontium and titanium were in a range that had to be considered as not toxic enough as bio-available elements to explain the damage observed at the plants themselves. Under the premises that there is a connection between the values in heavy metals found and the affection of plant growth the only solution was to look for non-soluble particles containing aluminum, barium, strontium and/or titanium that were affecting plant growth not due to their chemical, but due to their mechanical, electromagnetic or optical properties."

"From the metals contained in barium-strontium-titanate only barium has been sufficiently monitored by state authorities. The data from Germany covering the last 15 years show that the values of airborne barium referred to as dry deposition went down by 95%. This is accredited to improved industrial standards and reduced industrial exhaust. There is also a significant reduction seen in other heavy metals. Pollution deposited with rain is measured through the absorption of the pollutants in grass and referred to as wet deposition. This is a bit misleading because actually it covers both wet and dry deposition. During the same period, values for this composite wet and dry deposition of barium have been almost doubled. For the year 2012 the data gathered from private rain samples directly reveal an average of 0.003 mg barium per liter from which one can calculate a wet deposition of 865 t of Barium on the German territory per year – this value is supported by the data of the state authorities for wet deposition, last published for the years 2009-2011. Being specifically bound to rain, the detected barium must be considered as originating from aerosols of unknown origin, since industry and mining can be canceled out as sources."

Paper can be found here: http://www.aquarius-technologies.de/download/TheChemistryinContrails.pdf

ki_cz said:
Being specifically bound to rain, the detected barium must be considered as originating from aerosols of unknown origin, since industry and mining can be canceled out as sources."
Click to expand...

Ignoring the rest of the bunk, what is the logic here meant to be? Are they trying to say that rain doesn't wash ordinary dust out of the air?

OMG, it's from Harald Kautz-Vella! The man talking about artificial intelligences sweeping the galaxy, eradicating civilizations!

Very interesting how they've managed to mimic the look of a scientific paper, without it actually being one (or having been published as one).

Trailblazer said:
Ignoring the rest of the bunk, what is the logic here meant to be? Are they trying to say that rain doesn't wash ordinary dust out of the air?
Click to expand...

The paper definitely seems to lack scientific rigor. I'd be interested to know how they managed to determine that "industry and mining can be canceled out as sources".

Very interesting how they've managed to mimic the look of a scientific paper, without it actually being one (or having been published as one).
Click to expand...

Very good point. This seems to be strategy implemented by numerous pseudo-scientists now trying to get their work more widely recognized. One of the problems they seemed to have in terms of getting their messages across is that so many of these non-scientists had horribly unprofessional presentations. Now people are investing more time and effort into the visual presentation of their "findings" which make some people far more vulnerable to believing them.
Last edited: Apr 28, 2016

ki_cz said:
The paper definitely seems to lack scientific rigor. I'd be interested to know how they managed to determine that "industry and mining can be canceled out as sources".
Click to expand...

I have a lot of work on today but I will have a proper read later. Might be worth a full debunking from a chemistry perspective.

I think "mimic" is a good term. A careful look at some of the claims and evidence is fairly revealing. Here is a section on page 17:

In the year 1990 the U.S. Air Force Academy, Department of Chemistry, created a script for the chemtrail class, including the examination-forms. This script is available to the general public on microfiche. Of cause this script does not provide the precise formulas used in chemtrailing, but the combination of basic knowledge, the chemical reactions taught and repeated and asked for in the exams, give a rather clear picture of the chemical processes the students are trained to get creative on.

A minor point, but an annoying one for anyone who has published, is the poor quality of the actual citations. The author doesn't bother to include page numbers in many of his footnotes, a basic error that would have an article returned for revision

MikeG said:
The "script" in question in the footnote is the USAFA chemistry book that has been discussed many times in previous threads
Click to expand...

Yes, this is clearly written to be deliberately misleading:

You are obviously meant to read that as "the combustion process of jet fuel" but it is nothing of the sort.

In fact these chemicals are not named in anything to do with combustion at all. They come from this chart on p151 of the Chemtrails manual (https://chemtrailsplanet.files.word...trails_chemistry-manual-usaf-academy-1990.pdf) 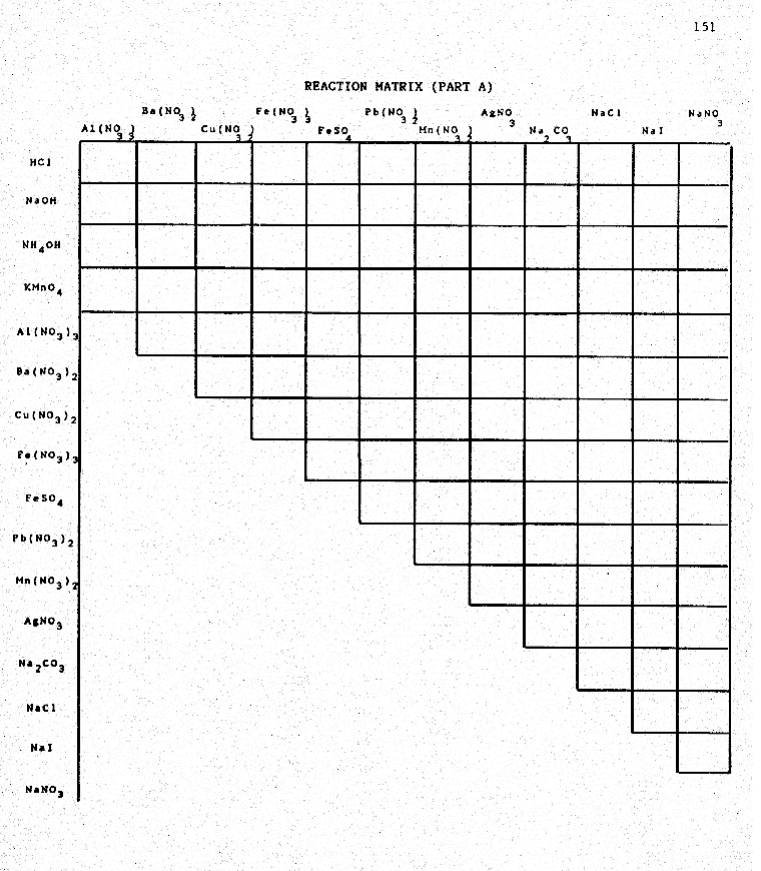 Which is from the Qualitative Analysis part of the course (starting on p145). 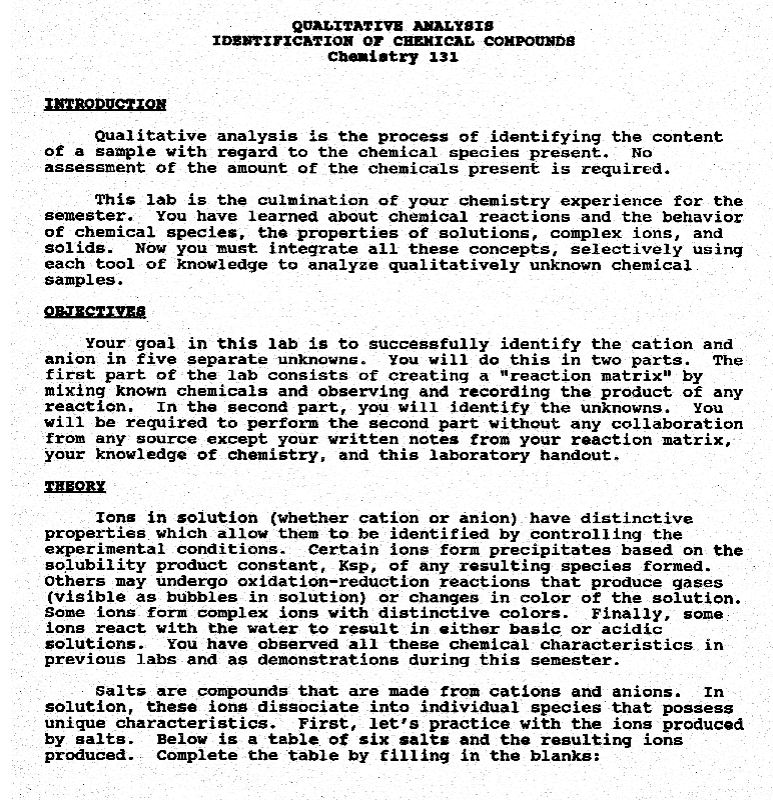 The idea is that you react the chemicals together, observe the results and use those to identify unknowns. 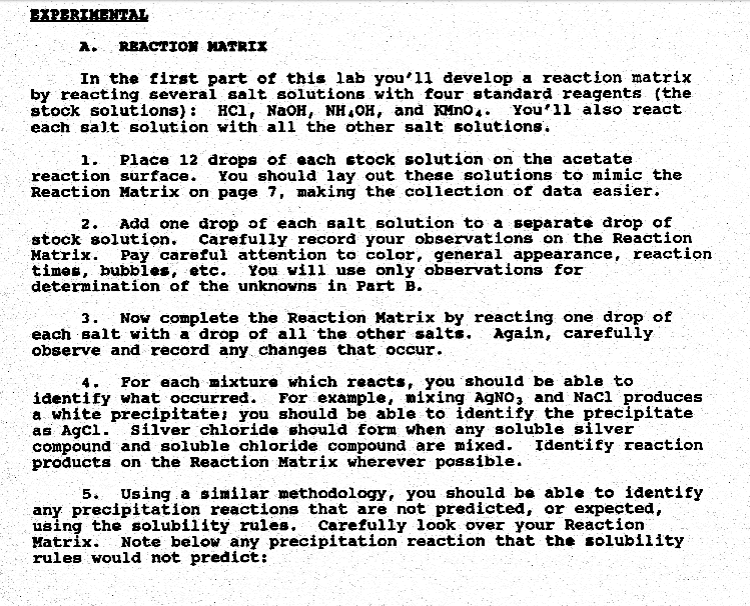 It is basic high-school chemistry experiments. No combustion involved. Just mixing a few drops of solutions.

All students taking a basic university chemistry class do exactly the same sort of qualitative analysis of an unknown substance. I did that in Chemistry 201 at Texas A&M University in 1975.
You must log in or register to reply here.