I recently discovered this fantastic website and this particular forum got me thinking about an image I took about two years ago, back in 2018 and that occasionally has made me wonder since. I hope this isn't off-topic or belongs somewhere else but, well, the moon is kinda in the sky as well?

If I'm not mistaken, it was during a lunar eclipse preceded by a "blood moon" phenomena. I took pictures of the moon from central Europe, with an APS-C Sony Alpha 6000 on tripod with manual focus, and I later noticed that some of them showed two strange lights. I can probably dig out the original images as well, but below is a composite I made at the time of the entire photograph, with the two specks of apparent light in the inserts at 100% image scaling. The images were taken as in-camera JPEGs (not RAW). Of course, being a "blood moon" event, by it's nature the moon is rather dim in these images despite a long exposure.

One theory I had is that these might be "hot pixels" on the sensor (especially since in my recollection I was not using the function where the camera does a second exposure with shut curtain to eliminate any hot pixels), but then I'm also tempted to believe that hot pixels would be actual pixels. The apparent lights on the image, however, are seemingly composed of multiple pixels and appear circular in nature.

I'm not saying it's aliens or something. I did find, at the time, a Wikipedia page that discusses sightings of lights and other similar observations on the moon (https://en.wikipedia.org/wiki/Transient_lunar_phenomenon) but I'm still puzzled whether this is more likely to be an imaging artifact or an actual light.

If anyone would share a theory and weigh in his or her experience here, I'd appreciate this very much! 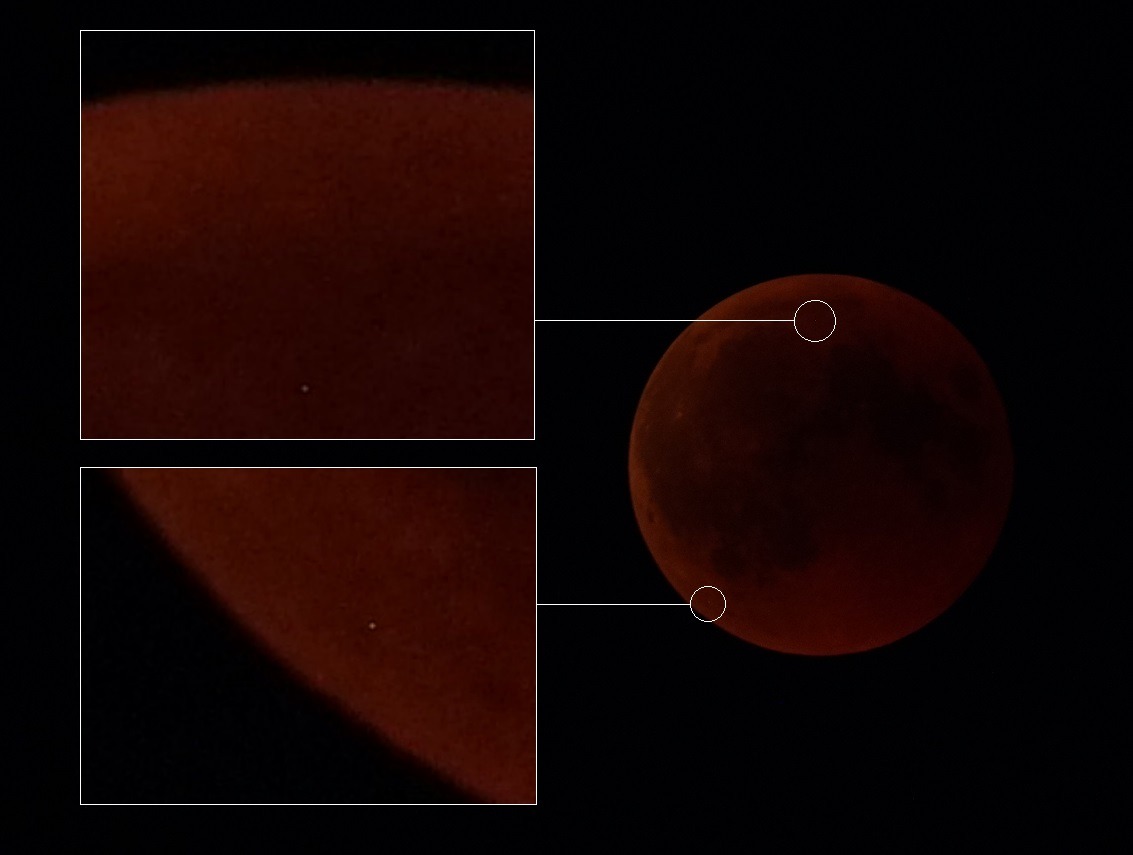 Staff member
Can you zip up the original file and post it here?

At the very least, how long was the exposure? What ISO?


JulianSark said:
One theory I had is that these might be "hot pixels" on the sensor (especially since in my recollection I was not using the function where the camera does a second exposure with shut curtain to eliminate any hot pixels), but then I'm also tempted to believe that hot pixels would be actual pixels. The apparent lights on the image, however, are seemingly composed of multiple pixels and appear circular in nature.
Click to expand...

I think the thing to do here would be to try to replicate the shot, and see if you get any stuck pixels, and then see what they look like. You'd need the same settings obviously, and manually select everything to match the original. Then take a shot in a dark room.

Thanks - I will hopefully manage to dig out the originals tonight and will zip them up and upload.

Once I found them I can determine exposure and ISO from the EXIF data. I can't tell anymore, however, what lens or aperture I used back then, since I am using almost exclusively adapted legacy lenses.

For what it's worth, I did take, however, pictures of the inside of lens caps and such afterwards and didn't have any permanent hot pixels on those.

Staff member
This is the inside of my pantry, looking down at the bottom of the door, with some light coming under the door. This was to roughly simulat the conditions of photographing a dark moon. 30 second exposure, ISO 800. Those are my toes at the bottom. Sony A6400, Long Exposure NR turned off. 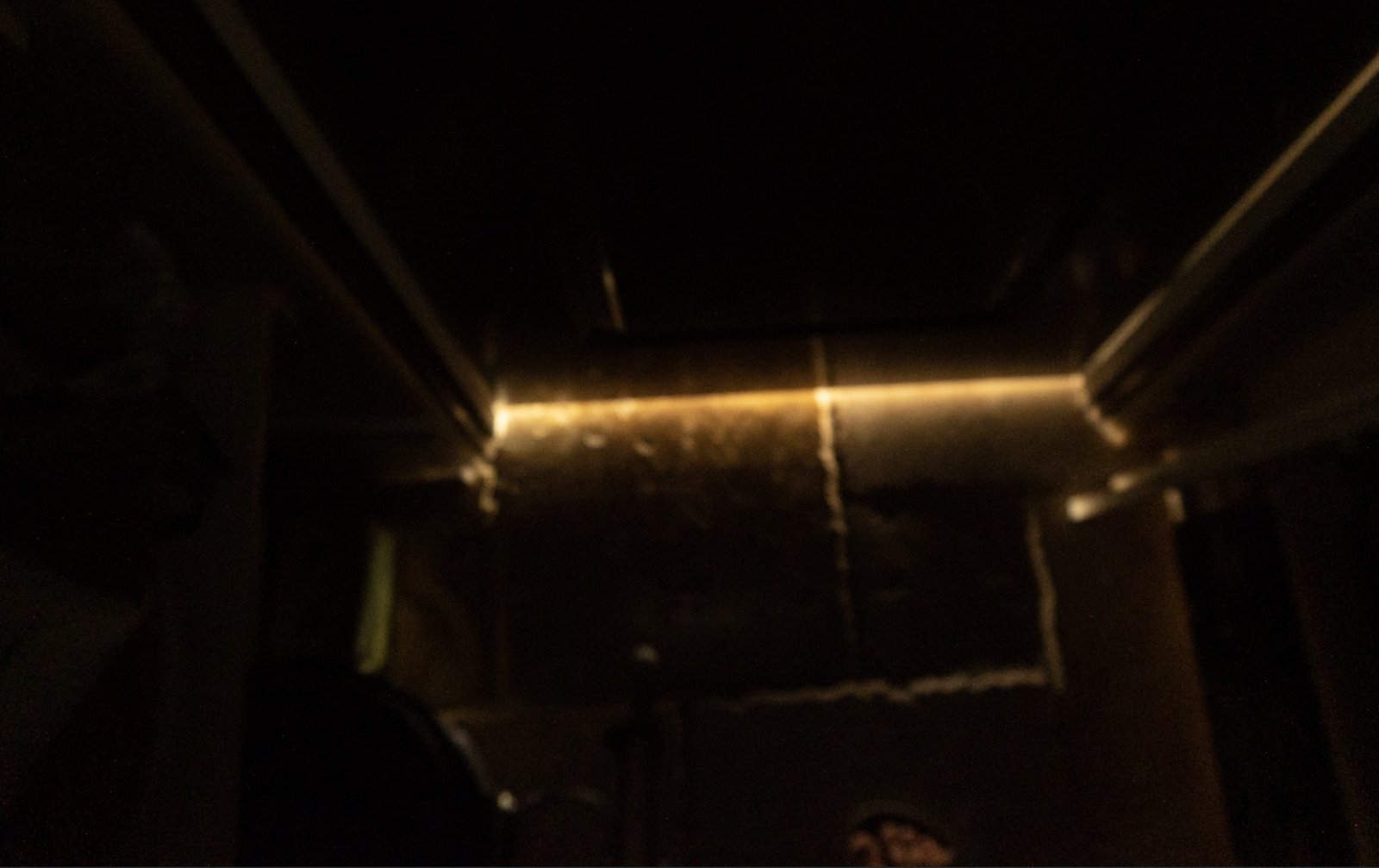 Boosing the exposure two stops you can see noise in the form of specks of light. 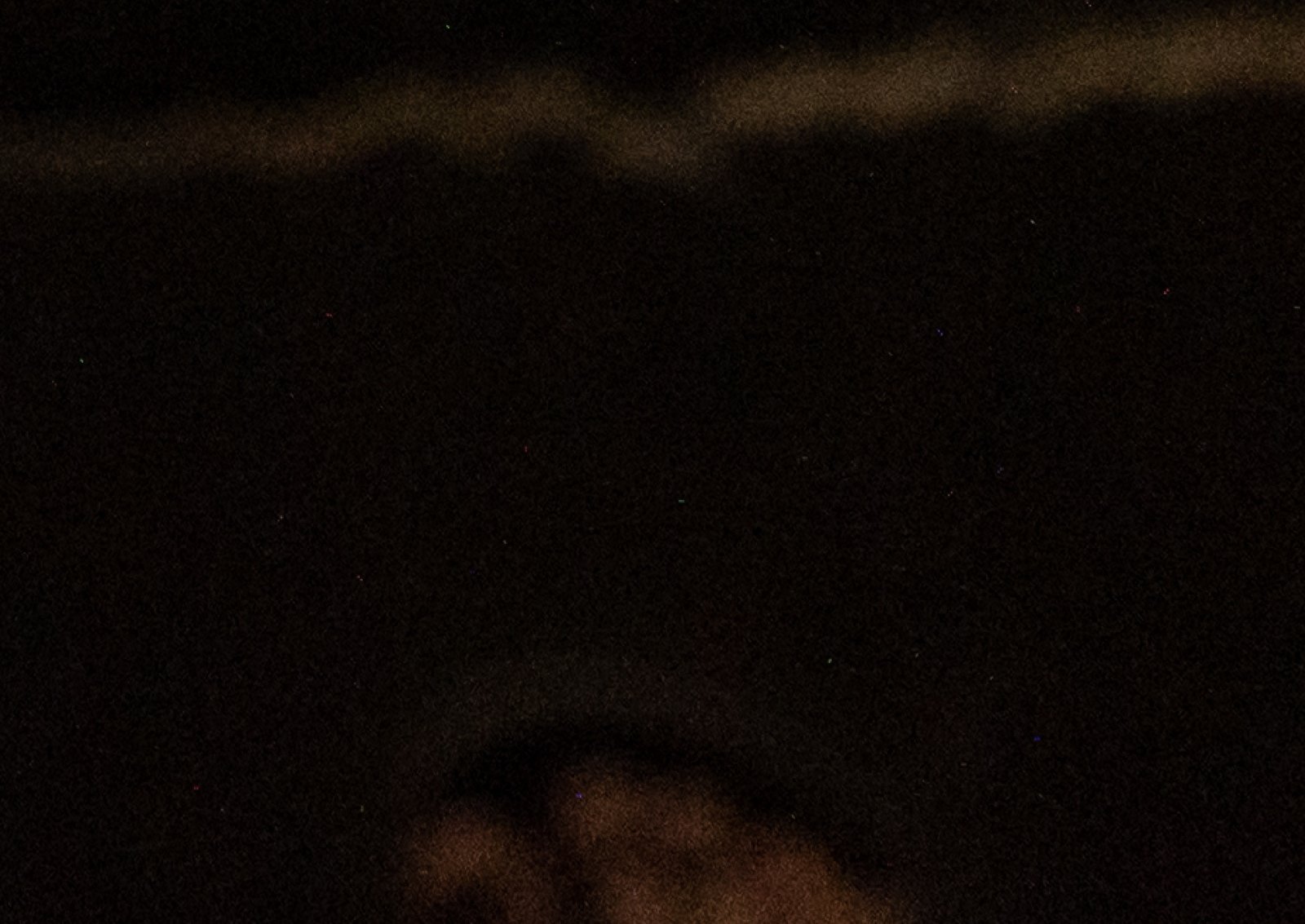 Zoomed in more, they are not individual pixels, but small groups of around 4x4 pixels 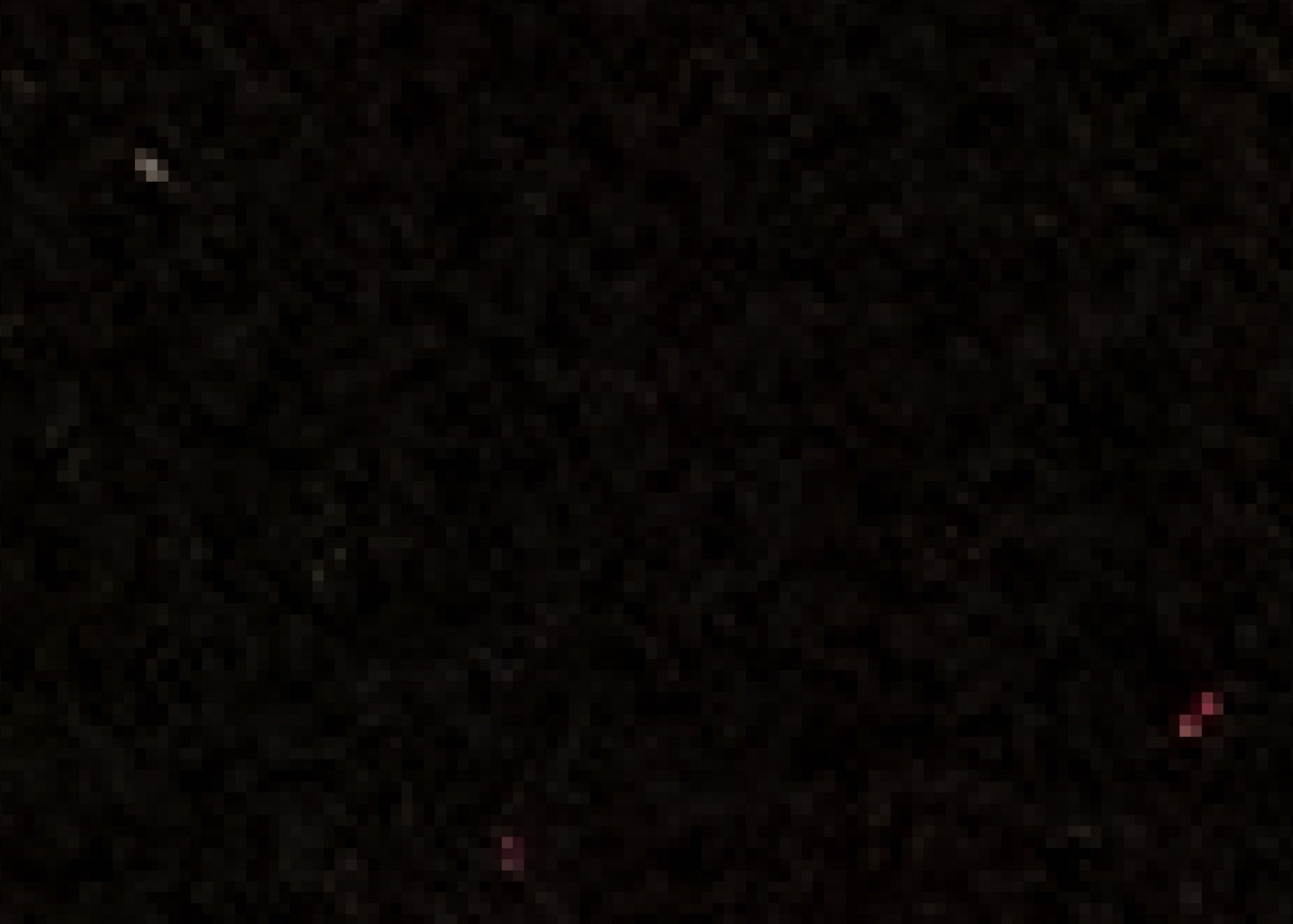 So it would be interesting to see in your original image, if the exposure was boosted a bit, if there's more specks like this, and how they compare in shape to the more visible two you see, at the pixel level.
J

I am already in awe about the effort you put into my question, thank you so much already!

Attached is bloodmoon.zip, containing five originals out of that series: Two with the strange highlights, and three without for reference. Turns out the exposure wasn't as long as I remembered - I think I mostly used one second because beyond that, the moon was getting blur due to it's movement across the sky.

Images in the archive:

DSC02370_dafuq.jpg: iso 800, 1s exposure. original image from the composite I posted earlier. Filename reflects my surprise at these lights in 2018 Lights at 12 o'clock and roughly 7 o'clock position.

DSC02386.jpg: taken some minutes later. Probably a different lens (not sure anymore, sorry), but still iso 800 and 1s. No strange lights (or at least none I can find)

DSC02346.jpg: a picture of Mars I took the same night, which is also iso 800 and conveniently mostly black. Almost the same exposure: 0,7s instead of 1s. No strange lights.

DSC02439.jpg: iso 160, 1/2s exposure. Image taken later the same night, I think with the waning eclipse. Also no strange lights on this one. 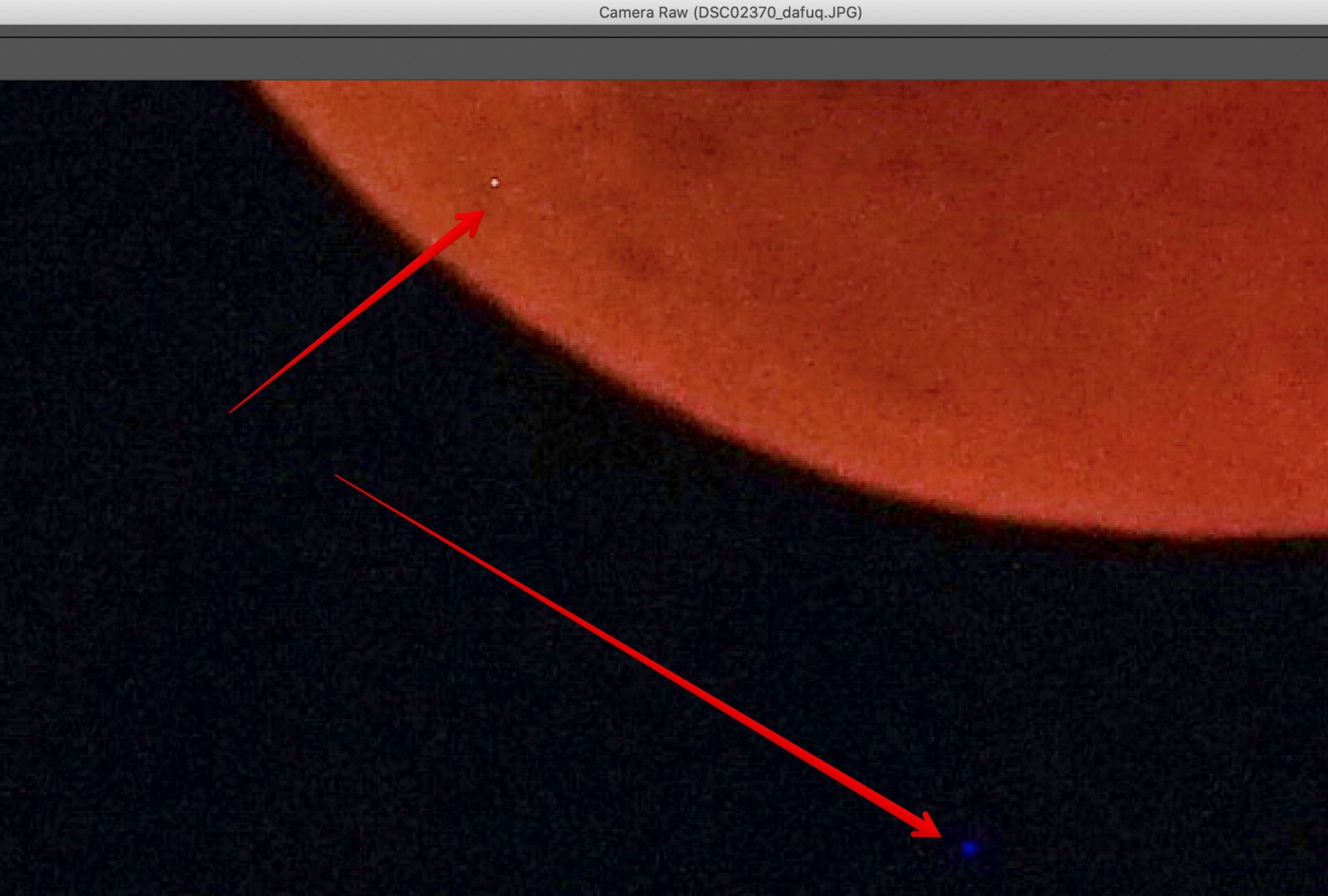 This large blue bit of noise in the 370 image makes me more inclined to think it's just sensor noise.

Of course it could be a flash on the moon. Meteor impact or suchlike. But two at the same time seems rather unlikely.
J

I just had an idea on the sensor noise issue, let me run this by you.

I just downloaded a software to measure distances on pictures (IC Meassure 2.0.0.245). At first I tried to draw a circle around the moon, and get the middle by drawing two lines at the widest points. Then I tried to measure the angle to the speck on DSC02370_dafuq.jpg and DSC02386.jpg. Since these images were clearly taken with different lenses, as the moon has different apparent sizes in them. But no dice:

HOWEVER it's in no way guaranteed that the camera was level, in fact that's always been an issue for me with horizon lines, since the A6000 has no built-in electronic spirit level, and my tripod has none. At night, there's likely tilt.

So then I thought I'd try to measure the distance from the outside circle to the speck, and see if it's proportional to the width (edit) diameter of the moon: 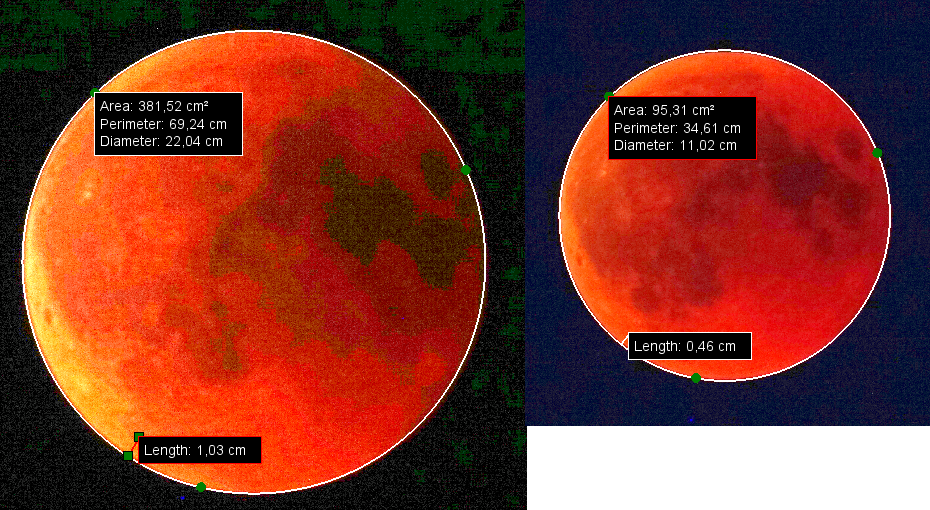 I admit I had to spitball a right angle from the line to the circle with my Mk. I eyeball. But (to my surprise) the DSC02386.JPG moon is rendered exactly twice as large as the DSC02370_dafuq.jpg one (which makes some sense - I think I was using a 500mm lens and then a 500mm lens with a 2x teleconverter, making this 1000mm).

The distance to the speck is 0,46 to 1,03cm, which is quite close to being a factor of two also. Only quite ... but then my circles and line placement is somewhat spitballed
J 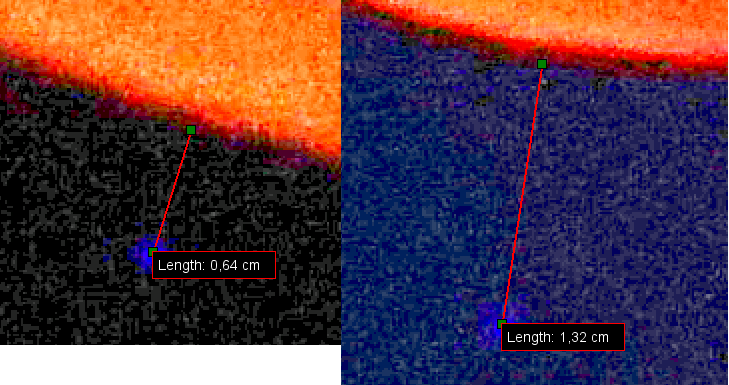 Same for a line from the blue speck to the rim of the moon. Again spitballing the angle, but 0,64cm to 1,32cm is pretty much factor 2 also.

Staff member
It's simpler to overlay the images in photoshop in two layers and then toggle them.

It then becomes apparent that these are actually stuck pixels. I made a quick video:
Source: https://www.youtube.com/watch?v=t8M0ZSIZO1E
J

I was toying around rather amateurishly with layers in Gimp but you were much faster. Mystery solved

Have a great day!
You must log in or register to reply here.