Reflection of the sunlight on water

We all know that reflection of sunlight on water at sunrise/sunset is dependent on observation point. But I'm scratching my head with next question. If I'm looking this reflection at one point and another observer who is 1Km away at the shore is looking the same thing, why is it that I can not see what he is seeing if light reflects from water. Does photons carry brightness with them if light travels as physics says? If so shouldn't I see both reflections or shouldn't the whole sea be bright, having reflected sunlight everywhere? 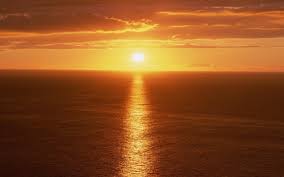 Staff member
Because the eye-water-sun angle needs to not vary much to see the reflection. Looking to the side makes the angle too much.

It's a fun problem. Try recreating it with aluminum foil. 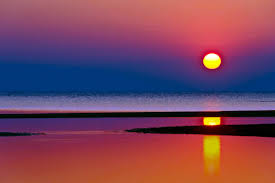 On the other hand you have diffuse reflection. If you shine the beam of a torch on a wall you can see a light area on the wall from all directions. because the rough surface of the wall reflects the light in all directions.
But the sun is not a torch with a concentrated beam, so you cannot see one spot or area (unless it is cloudy and only a small area of the surface is lighted by the sun).

Staff member
You only see the photons that end up in your eye.

The photons forming the bright reflection that your friend sees end up in his eye, not yours.

You can still see some light on the sea in those areas, of course, but that is just photons that have been scattered sideways rather than the main, bright, direct reflection.

NobleOne said:
or shouldn't the whole sea be bright, having reflected sunlight everywhere?
Click to expand...

You do have reflected sunlight from everywhere, because of the diffuse reflection. Of the infalling sunlight a portion is reflected specularly, another portion is absorbed, a third portion enters the water and finally a portion is reflected diffusely. And every patch of the surface only reflects diffusely a small percentage of that last portion in your direction (the rest goes in all other directions). The ratio of all these portions depends on the angle of incidence of the light ray.
Last edited: Jan 13, 2017

NobleOne said:
If so shouldn't I see both reflections or shouldn't the whole sea be bright, having reflected sunlight everywhere?
Click to expand...

Imagine you are at point A and your friend is at point B. 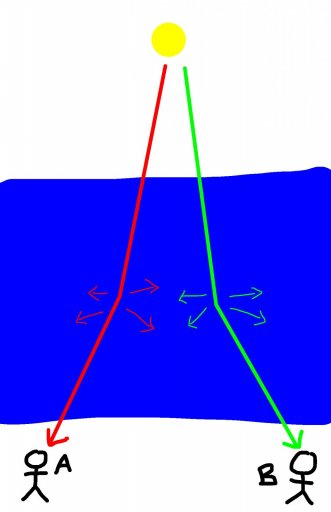 But there is also a smaller amount of light scattered in all directions by the rough surface of the water (the small arrows). That happens pretty uniformly all over the sea, so what you will see then you look to the point where your friend sees the bright reflection is just the background random scattered light. Same when he looks towards the reflection you see.

Staff member
Try also experimenting with a dark container with water. A large tray would work. Use a small light for the sun. Experiment with angles and still vs rippled. Compare to foil, smooth or wrinkled. 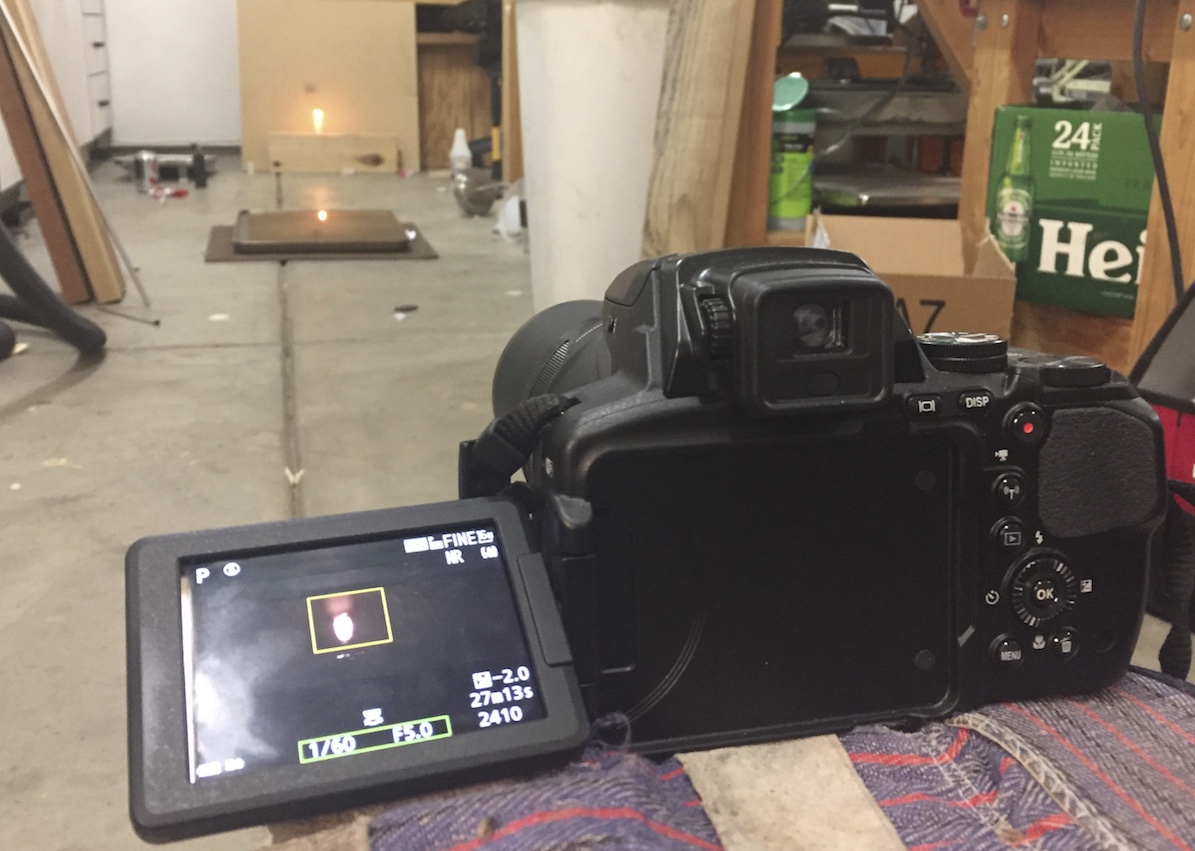 You see a line because with small ripples it's only along that direct line, and with a very low camera angle, that a small change in angle will result in the sun reflecting in the camera. If you move away from this line then you need additional slope to reflect back towards the light. So for the directly reflected light to spread out the ripples need to be larger.

Dr. Joseph Shaw is the go-to expert on glitter patterns.

The trail is actually made up of numerous individual images of the sun. If you looked at each one, you would see a more or less recognizable image of the sun. But they are distant, there are a lot of them, and they come and go in an instant.

Think of each little wave as a little mirror and seeing the sun in a thousand different little mirrors. Each one is at just the right angle to reflect to your eye. So in a sense the trail you see is unique to you. That other guy is seeing his own unique trail too. But they are very similar.

I remember having this thought before, except it was about seeing the reflection of the sun on a car. Why wouldn't the entire car be awash with blinding light? Thinking about it, though, I realized what Trailblazer described above: only a certain area of the car would reflect the photons from the sun directly into my eye, and that area was the spot where I was the image of the sun.

Instead of thinking about how the sunlight is cast in all directions, think about your own cone of vision. You can picture it as a series of "rays" that converge on your eye(s). Only photons that travel in a path along these rays will be in your vision. So as the rays of light fan outward form the sun, only some will line up with the "rays" that converge on your eyes. It's in those areas that you will see an image, in this case the reflection.

This explanation sort of assumes that we're talking about theoretical points of light rather than real objects with size and mass, but if you imagine that every visible point on the sun is radiating photons in all directions then there will be one ray of light that travels from that point to your eye; do this for every point on the sun and your eye sees an object. The reflection is causing the other rays from those points to bounce in different directions, and some of them are directed into your eye. Others just bounce off elsewhere and scatter, meaning they don't make the same bright reflection as the direct ones.

Be sure you understand the idea of "specular reflection." The difference between matte black and gloss black is something that puzzles people... to the point that I've heard it in a stand-up comedian's routine. 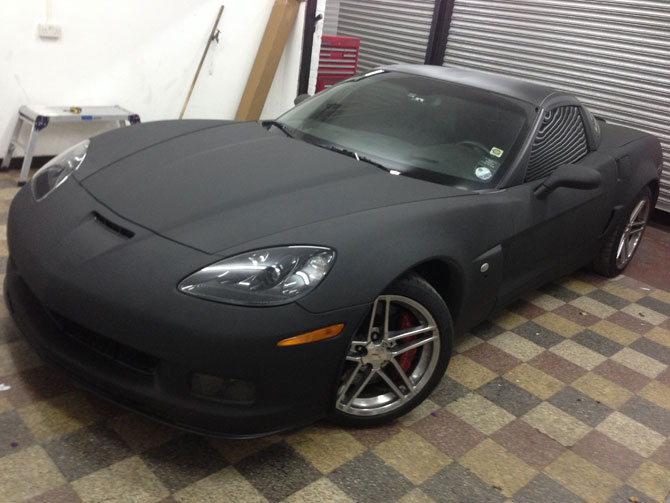 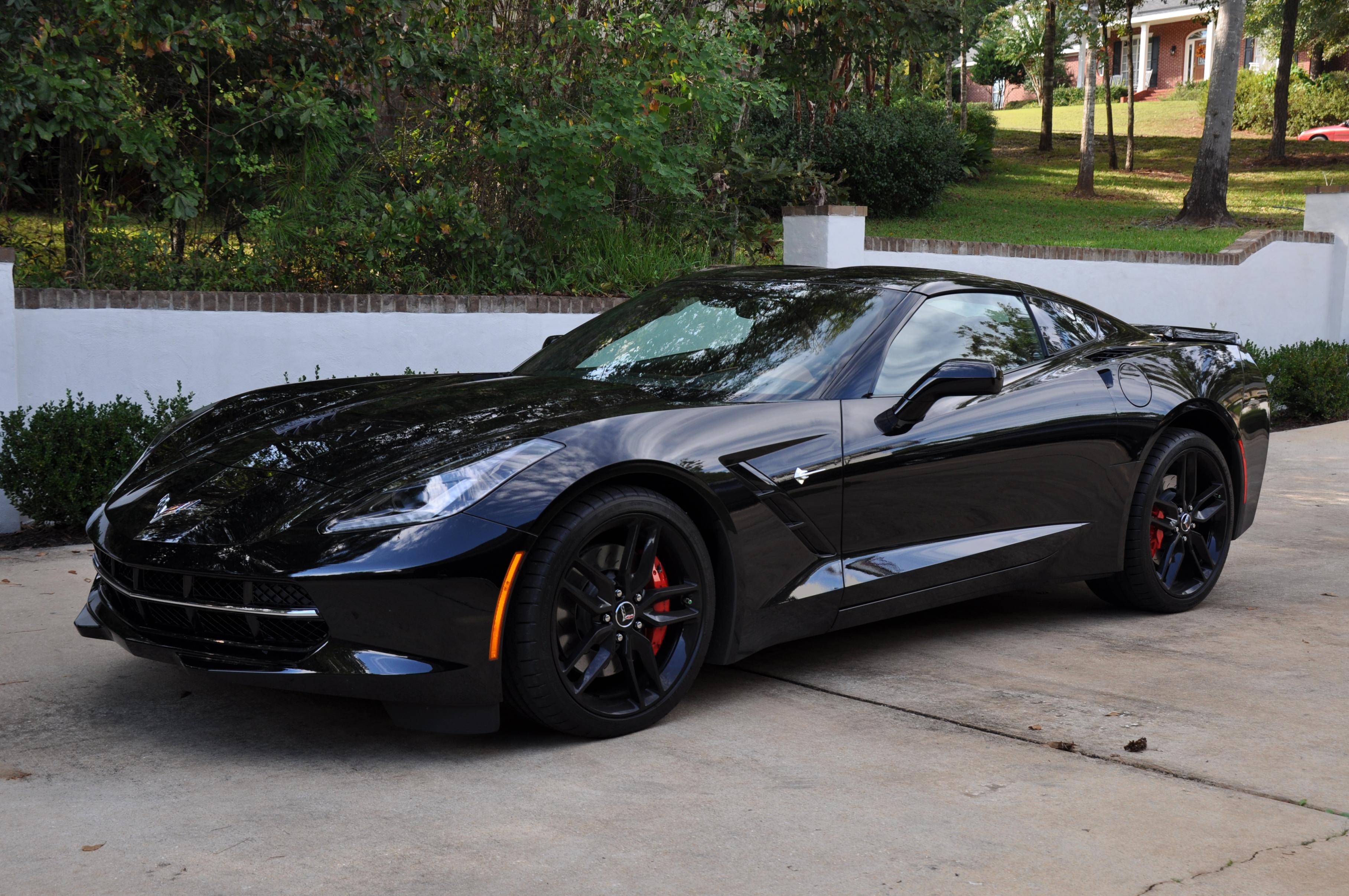 
Reflection of light is either specular (mirror-like) or diffuse (retaining the energy, but losing the image)

Specular reflection is the mirror-like reflection of waves, such as light, from a surface. In this process, each incident ray is reflected, with the reflected ray having the same angle to the surface normal as the incident ray.

It's so much more complicated than simply rough and smooth surfaces that I have to refer to the wiki article:


When light strikes the surface of a (non-metallic) material it bounces off in all directions due to multiple reflections by the microscopic irregularities inside the material (e.g. the grain boundaries of a polycrystalline material, or the cell or fiber boundaries of an organic material) and by its surface, if it is rough. Thus, an 'image' is not formed.

No matter how smooth and polished the surface of a material like this is, it won't be a mirror. But when you have a really smooth surface, you get an increase in the amount of specular reflection.

A car is an object with an irregular shape. But this is the way a gloss surface on a regular shape reflects light. 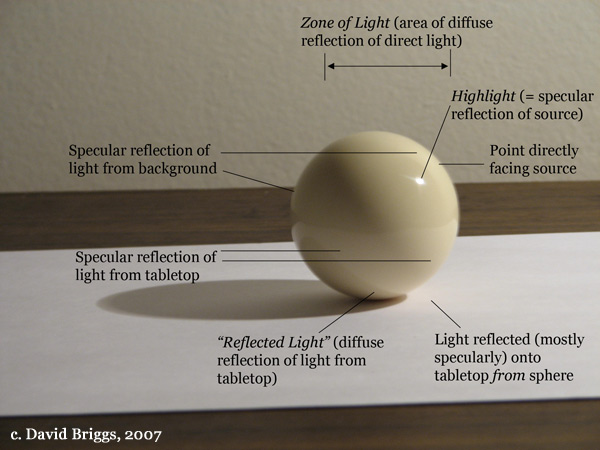 Something we haven't mentioned that might be a part of the OP's puzzlement is parallax.


Parallax is a displacement or difference in the apparent position of an object viewed along two different lines of sight, and is measured by the angle or semi-angle of inclination between those two lines.

But you can see the diffuse reflection of the sun (and sky), what we call sunlight, or a sunlit lake, across the whole lake all at once.
Last edited: Jan 13, 2017

Mick West said:
Try also experimenting with a dark container with water. A large tray would work. Use a small light for the sun. Experiment with angles and still vs rippled. Compare to foil, smooth or wrinkled.
Click to expand...

What about adding a heating coil (hot plate) just under what you would consider...."the horizon" (or near horizon)
Could you make a miniature "mirage" ? I never tried it.

Leifer said:
What about adding a heating coil (hot plate) just under what you would consider...."the horizon" (or near horizon)
Could you make a miniature "mirage" ? I never tried it.
Click to expand...

Not a stable one. You could get some shimmering though. The warm air would be continually rising.

Trailblazer said:
You only see the photons that end up in your eye.

The photons forming the bright reflection that your friend sees end up in his eye, not yours.

You can still see some light on the sea in those areas, of course, but that is just photons that have been scattered sideways rather than the main, bright, direct reflection.
Click to expand...

Thanks! This is the answer I was looking for. I wrongly thought that photons carry brightness with them but the reality is that only thing that photon is carrying is the information for our eye which then interpret it as brightness when is stimulated by the wave of photon. I'm referring here only to visible light. All other EMR excluded (heat, etc.)

According to this, we actually do not see the whole picture with our eyes. Since there is EMR everywhere, only a small fraction of it reaches the eye and if we could see (interpret with sight) every single photon all we would see is brightness or light. Correct me if I'm wrong here.

Also, hypothetically speaking, if someone could control the Sun, at least those visible EMR, some very deceiving effects could occur for targeted person. What is even more scary is, if done right, any person standing next to targeted one would not see what targeted person sees.

I'm wondering if there is some technology out there which can modify those visible EMR, not from the Sun, but between the Sun and observer.
Last edited: Jan 14, 2017

I also want to say: thank you all for your generous responds. I've also done some experiments in my mind and then checked if light really bounce from the surface at the angle which came onto it.

A darkened room with pocket laser and some smoke showed it does.

Glitter trail on a wave. FE Believers cite glitter trails on the ocean as proof that the surface of the ocean is not curved. They insist (it's only common sense!) there can be no trail on a curved surface. 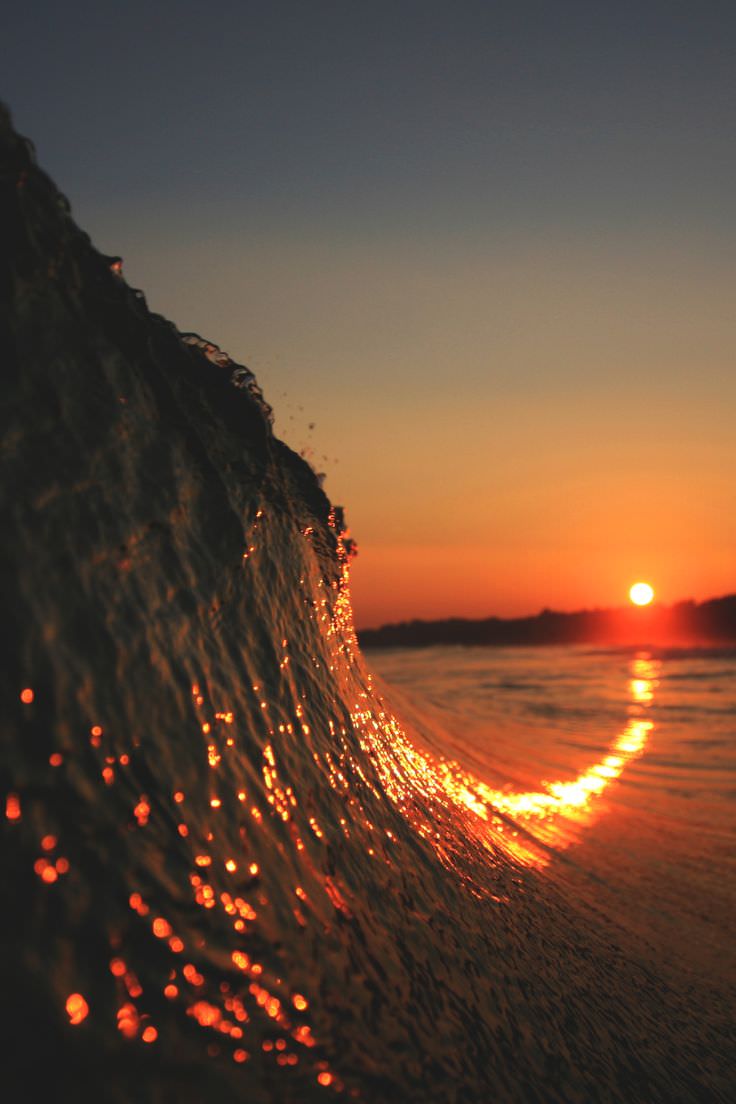