Hi everyone! I have encountered this one website by the name of ''Stop the Kinsey Institute'', which claims that in a testimony he gave to the California Subcommittee on Sex Crimes in 1949, Alfred Kinsey claimed that children are unharmed by sexual abuse:

Kinsey also claimed that his extensive data on children proved they are unharmed by sex;
Click to expand...

The source for this claim appears to come from one of the books written by conservative author Judith Ann Reisman, titled Kinsey: Crimes and Consequences. It makes the following claim on page 212 of the book:

In 1949, Kinsey told a special session of the California legislature that his Indiana University team had determined that most child sex offenses result from sexual repression. He and his team were, by definition, secret “sexual psychopaths” fearful of prosecution and prison, public condemnation, and ruin of their scientific careers. Therefore, Kinsey energetically advocated against the legislative and judicial move toward tougher sex offender penalties. The data, he said, proved the “sexual psychopath” laws invalid since all sexual conduct was normal, “mammalian,” and thus largely noncriminal.
Click to expand...

There was not a single source cited for this claim in particular. However, the book, on page 213, offers the following transcript allegedly from the aforementioned subcommittee:

After claiming that their massive database found most children harmed more by hysterical parents, police and social workers than by sexual molestation, Kinsey used his false data to argue for paroling rapists and even child sex offenders:

Here is a screenshot of the source cited:

In case anyone is curious, here is the report in question housed in the Stanford Auxiliary Library #3. In addition, Reisman cites a series of quotes allegedly from a book by Judge Morris Ploscowe titled ''Sexual Patterns and the Law'', which states that:

One of the conclusions of the Kinsey report is that the sex offender is not a monster... but an individual who is not very different from others in his social group, and that his behavior is similar to theirs. The only difference is that others in the offender’s social group have not been apprehended. This recognition that there is nothing very shocking or abnormal in the sex offender’s behavior should lead to other changes in sex legislation. …In the first place, it should lead to a downward revision of the penalties presently imposed on sex offenders.
Click to expand...

Before we continue, do note that Reisman never cites the Kinsey report directly, nor do they quote him directly. Rather, all sources for such claims come from second hand sources. According to Google Books, the only book that matches this title by Ploscowe is ''Sex and the Law''. By searching for the word ''Kinsey'' within the book, I obtained the following results: 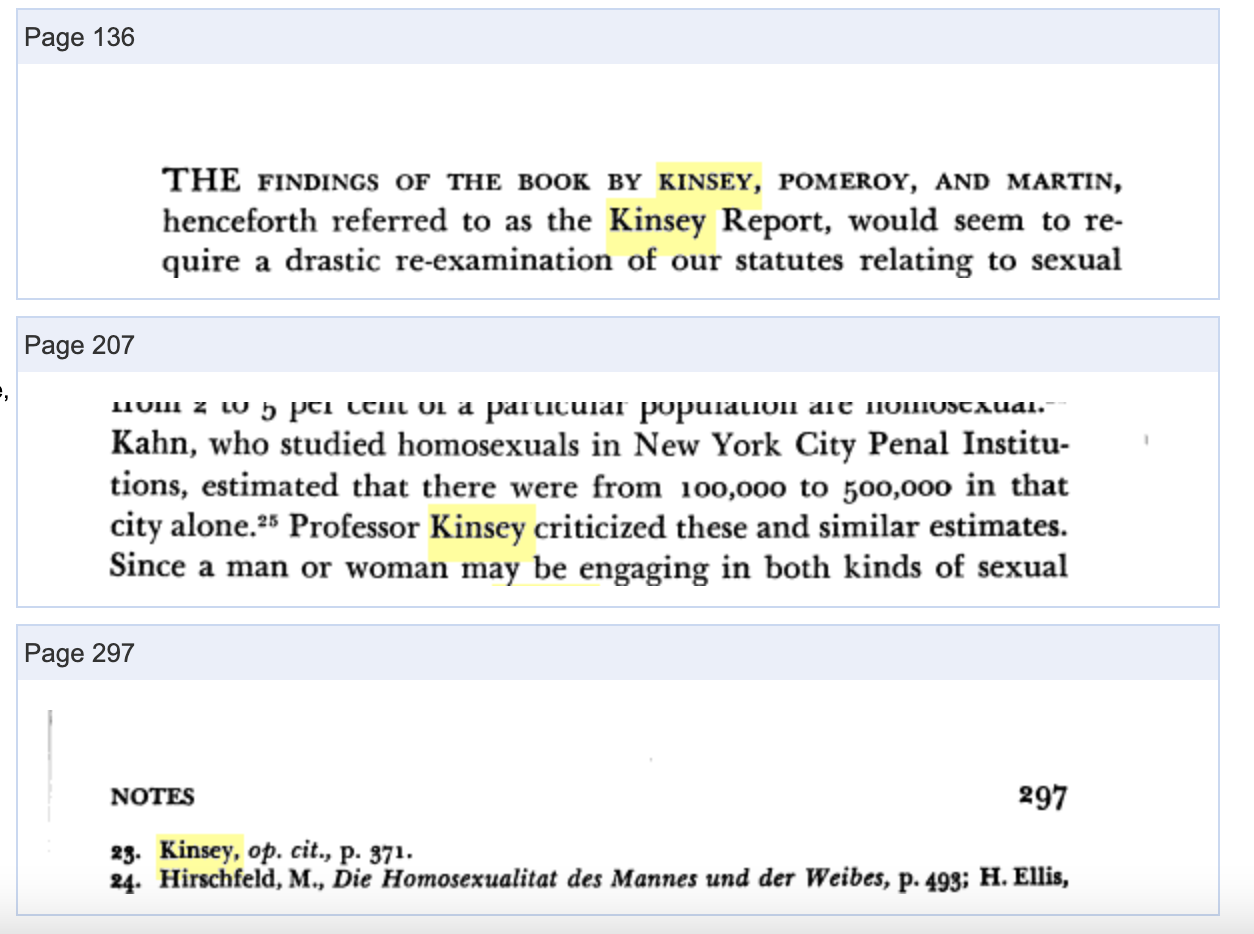 Of course, this isn't much to work with, especially since I wasn't able to obtain a PDF of Ploscowe's work. However, if we do a more detailed analysis of the original citation, we find that it comes from a book titled ''Sex Habits of American Men, A Symposium on the Kinsey Report'', allegedly by an Albert Deutsch.

Here are the results I was able to obtain via a simple google search of the above citation. I was also able to obtain the following book review on the JAMA network, locked behind a paywall of course:

The publication of the Kinsey report aroused a flood of essays and comments which approached the problem from many different points of view. The collection of essays included in this book is better than most because of the qualifications of the contributors. The work is certainly not one for the average reader, who is likely to come away from its reading more confused than if he had limited himself to Kinsey's original book. As might be expected, the Protestant, Catholic and Jewish points of view vary, and one wonders why a book of the type of the Kinsey book should be submitted to that type of study. The criticisms in the various chapters take the colors of the well established attitudes of the writers. If the reader has previously approached the subject he obviously colors what he reads by his own attitudes. If this seems confusing, it is.
Click to expand...

Well what can we say, we have a dearth of primary sources, all of which cannot be easily accessed online. Hence people ought to take this claim by Reisman, for now, with a dump truck load of salt. If anyone is able to progress this case and provide the relevant sources, please do notify me.

You have to watch out for context when "sex offenders" are mentioned, because it's not clear at all that this refers to child abuse.

Sodomy laws in the twentieth century. The nature and enforcement of sodomy laws changed dramatically in the next century. The addition of oral sex to many sodomy laws—which expanded the group of potential violators to include, for example, men engaging in sexual activity with other men in public places like bathrooms—and the creation of police forces in America’s rapidly growing urban areas fueled arrests and imprisonment for violations of these statutes [8]. City and state governments vigilantly apprehended supposed criminals in response to public outcry against indecency, sexual solicitation in the nation’s cities, and the predation and molestation of minors [9, 10]. During the 1950s, McCarthyism resulted in state- and nationwide witch hunts of male “homosexuals” in which the acts of oral and anal sex between consenting adult men were conflated with child molestation [11].

Specifically, your quotes from "Sexual Patterns and Law" look like they're exclusively referring to homosexuality.

The meeting took place in June 1944, when the pedophile, said to have been a man named Rex King, was 63. Before and after the meeting, Kinsey wrote to King, coaxing him to send his detailed diaries of his sexual exploits, including those with children. Jones reports that on Nov. 24, 1944, for example, Kinsey wrote, "I rejoice at everything you send, for I am then assured that that much more of your material is saved for scientific publication." Kinsey published much of King's data in "Sexual Behavior in the Human Male," where tables summarized King's attempts to bring to orgasm boys between the ages of 2 months and 15 years, in some cases over a period as long as 24 hours. Kinsey attributed the data not to one source but to many. But in 1995 John Bancroft, who was director of the Kinsey Institute until this spring, discovered that all the data came from King. In a forthcoming article, Dr. Bancroft suggests that Kinsey might have wanted to shield King from public attention.

The campaign to publicly link Alfred Kinsey and pedophilia seems driven by Judith Reisman, who has also published on it.

Claims that he relied on pedophiles and was one himself have circulated for decades, namely after Judith Reisman made such allegations in 1981. Reisman started speaking out against Kinsey’s research and the existence of the institution after her daughter was molested in 1966 by another child. She believes Kinsey’s research into children and pornography increased sexuality in children, which caused a “pattern of juvenile sex offenders” that put her daughter in danger, according to an autobiography on her website.

Part of Kinsey’s research relied on gathering sex diaries. Multiple diaries were sent by men who claimed to be pedophiles. According to biographies, research records and statements made by past institute directors, neither Kinsey nor his team of researchers ever witnessed acts of pedophilia or asked a research subject to participate in sexual acts with children. But they did use information from the men’s diaries and interviewed pedophiles as a means of research on the subject.

Despite making claims that already have been disproved, the group wants an investigation into the institute, and for any federal funding to be diverted from funding the research.

Chuck Carney, spokesman for Indiana University, said the university did not know about Friday’s protest until he was contacted by media.

“They’ve repeated things that have been repeated for years and have been debunked. It’s just not true, and what they’re alleging is going on now is just not true. There is no research that is being done on children, and we do not promote the things they’re saying we do,” he said. “We appreciate their concern, but it’s based on false information.”

I found the following position of a Kinsey Institute director: 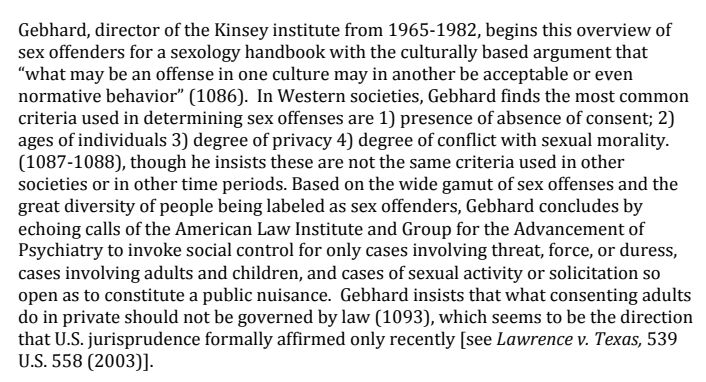 He explicitly includes "cases involving adults and children" as valid subjects of legislation.

So, whatever Kinsey himself may have thought (if the claim is true) seems to not have carried over to the subsequent position of the Kinsey Institute itself. As far as that goes, the campaign seems to be outdated and misleading.

I wouldn't be surprised to find researchers (without excusing any bad behaviors)
uncomfortable calling a person a monster, if that person had been similarly victimized.

I do find it a bit hard to believe that our understanding of Kinsey could be so dramatically
wrong, based on such flimsy evidence. "Extraordinary claims," etc.

what is really hard to understand today, 70 years later, who got called a monster for what.
By supporting that, you might find yourself supporting calling homosexuals monsters.

My personal skepticism comes from the fact that someone who clearly wants to make a statement about an issue of today sees it as necessary to vilify what a dead guy said or did 70 years ago. If that's the best way to make their point, common sense tells me that the point isn't very good.
T

After reading Kinsey's ''Sexual Behaviour on the Human Male'', I have found another quote that further sheds context on what Kinsey actually meant when he talked about paroling ''sex-offenders'':

It will be recalled that 85% of the total male population has pre-marital intercourse, 59% has some experience in mouth-genital contacts, nearly 70% has relations with prostitutes, something between 30 and 45% has extramarital intercourse, 37% have some homosexual experience, and 17% of farm boys have animal intercourse. All of these, and still other types of sexual behaviour, are illicit activities... The persons involved in these activities, taken as a whole, constitute more than 95% of the male population. Only a relatively small proportion of the males who are sent to penal institutions for sex offenses have been involved in behaviour which is materially different from the behaviour of most of the males in the population. But it is the total 95% of the male population for which the judge, or board of public safety, or church, or civic group demands apprehension, arrest and conviction, when they call for a clean up of sex offenders in the community.
Click to expand...

So as Kinsey referred to the existence of males who performed sexual behaviour markedly different from the general male population, and stated that they only represent a small portion of people, he is in fact stating that such sex offenses are very rare. And as they are likely offenses pertaining to sexual violence such as rapists and pedophiles, and as Kinsey himself was clearly talking about how ridiculously excessive much of the sex laws were in his time, Reisman's allegations are therefore invalid.

Hard to believe, when you read a bit about her.
"Her accusations against Kinsey lack any foundation in reality."
https://rationalwiki.org/wiki/Judith_Reisman
You must log in or register to reply here.

T
Need Debunking: Heritage Foundation claims that condoms are 69% effective at preventing HIV, among other claims

T
Claim: Simone de Beauvoir said that women should not have the choice to stay at home