Myth: No one has ever died from marijuana

Let me preface this with an opinion: I do think marijuana should be legal. The purpose of this thread is to acknowledge that, while marijuana has some potential as a therapeutic drug, it can also has negative side effects, including death, just like any drug. Myths that say otherwise prevent people who might benefit from it from making informed decisions and can also lead to more harmful myths that it can cure cancers. 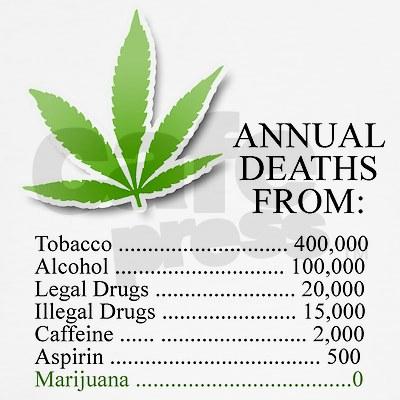 The claim that marijuana has never killed anyone is made seemingly everywhere even by sources that seem credible. There are multiple reasons why this is false. If you want to know why then skip ahead but first we have to talk about how marijuana works once it is consumed.

How cannabinoids work:
Cannabinoids are the active ingredients in marijuana that offer a variety of effects. While there are over 100 cannabinoids in marijuana, tetrahydrocannabinol (THC) is the most widely known and is responsible for the psychoactive effects. The human body responds to these molecules because it has what is called an endocannabinoid system. This system works when receptors called CB1 and CB2 are activated and these receptors exist mostly in tissues like the brain and central and peripheral nervous systems. The endocannabinoid system is involved in things like memory, appetite, immune function, and stress. Our bodies make and use endocannabinoids to regulate this system while phytocannabinoids, especially THC, bind more tightly and with less discrimination to the CB1 and CB2 receptors and so are able to disrupt or alter the many things regulated by the endocannabinoid system. This system is a target for therapeutics but creating successful drugs that do so is easier said than done.
http://www.sciencedirect.com/science/article/pii/S1359644616302926

As shown in Fig. 1, the ECS is extremely complex. Thus, to study the different EC pathways, identify their biological role(s), and find new therapeutical targets for various diseases, a holistic metabolomic approach is required.

How marijuana can be harmful:
Let's cut to the chase, smoking anything isn't exactly the best thing you can do to your body. It is often cited that the LD50 (lethal dose) of marijuana is so high that it is impossible to overdose yet the 400,000 deaths attributed to tobacco in the image above are not from overdoses but are largely the result of lung or head and neck cancers after years of smoking. Smoking marijuana is going to carry similar risks.
http://pubs.acs.org/doi/pdf/10.1021/tx9000286

Our results suggest that cannabis smoking may be a risk factor for lung cancer. However, residual confounding by tobacco smoking or other potential confounders may explain part of the increased risk.

Long term cannabis use increases the risk of lung cancer in young adults.

So smoking it can be bad but what about things like vapes or edibles? Consuming marijuana in alternative ways is still going to carry risks for adverse effects. This is because you're still affecting your endocannabinoid system and changing a wide range of variables in your body. Here I'll just focus on one well documented risk of consuming marijuana, ischemic stroke. While it is an exceptionally rare event, the causal link between marijuana and cases of ischemic stroke in young individuals is real.
https://www.ncbi.nlm.nih.gov/pubmed/25700287

Many case reports support a causal link between cannabis and cerebrovascular events. This accords well with epidemiological and mechanistic research on the cerebrovascular effects of cannabis.

Multifocal angiopathy associated with cannabis consumption could be an important cause of ischemic stroke in young people.

Cannabis use is associated with complications, considered to be serious since they lead to hospitalization. Beyond the well-known and widely investigated psychiatric events, serious cerebro and cardiovascular complications have been identified. These findings contribute to improve the knowledge of cannabis-related adverse events.

Again, these more serious complications are rare. Together with the effects of smoking, however, it is clear that the idea that no one has ever died as a result of consuming marijuana is demonstrably false.

What this all means:
So it is possible to die as a direct result of consuming marijuana in any form. This should not be surprising! No drug, food, or substance that goes into your body is ever 100% safe. This does not mean that marijuana should be illegal but it also doesn't mean it is a good therapeutic, although it has already been proven useful to some patients. Much work still needs to be done in order to effectively target the endocannabinoid system in the clinic. In order to be effective, the system must be understood in greater detail if we are to give the proper cannabinoids in the correct doses so as to treat the disease/ailment with minimal unintended effects on other parts of the system. As of now, there is not a whole lot of good research done on marijuana. This is often cited as a reason to legalize it so that researchers can more easily obtain it and study its effects. It also is part of the reason why this myth is so pervasive. Under-reporting, poorly controlled studies, and lack of mechanistic understanding has allowed people to get away with claiming that marijuana causes no deaths per year. Nonetheless, enough data and mechanistic understanding exists to confidently say that this claim is bunk.
You must log in or register to reply here.

K
Claim: Half of FDA funding comes from pharma companies. Conflict of interest?

P
Claim: 75 Deaths of athletes in Five Months are Because of COVID-19 vaccines