Four passengers (initially reported as five) did not check in for the flight, Malaysia Airlines' most recent statement on this:
http://www.malaysiaairlines.com/my/en/site/dark-site.html


Tuesday, March 11, 05:29 PM MYT +0800 Malaysia Airlines MH370 Flight Incident - 12th Media Statement
This statement is in reference to the many queries on the alleged five (5) passengers who checked-in but did not board MH370 on 8 March 2014 from Kuala Lumpur to Beijing despite having valid tickets to travel.

Malaysia Airlines wishes to clarify that there were four (4) passengers who had valid booking to travel on flight MH370, 8 March 2014, but did not show up to check-in for the flight.

As such, the issue of off-loading unaccompanied baggage did not arise, as the said four passengers did not check in for the flight. Hence, the above claim is untrue.

Other reports are somewhat confusing:
http://news.malaysia.msn.com/tmi/four-passengers-not-onboard-mh370-replaced-by-standby-passengers

The mystery behind the four passengers who checked in but did not board the Malaysia Airlines (MAS) flight MH 370 was finally “cleared” after it was revealed that four standby passengers had taken their seats.

Following a barrage of questions on the matter, MAS group chief executive officer Ahmad Jauhari Yahya said of the 227 passengers, four who had bought tickets did not turn up to catch the flight to Beijing at the Kuala Lumpur International Airport (KLIA).

Their places were taken by four people, who were standby passengers, he explained.

He, however did not reveal more about the four passengers.

It was earlier reported that five people did not board the plane after checking in but yesterday, Inspector-General of Police Tan Sri Khalid Abu Bakar told reporters that every person who had booked a ticket for the flight had boarded the plane.

He maintained that that is what the police found in their investigations.

"Let me make it simple, everyone who was supposed to be onboard, was on the flight," Khalid was quoted as saying yesterday.

Khalid's statement caused confusion as the Department of Civil Aviation (DCA) had earlier claimed that four passengers did not get on the plane.

DCA director-general Datuk Azharuddin Abdul Rahman told reporters that the five had failed to board and their bags were all removed from the plane, as per the SOP, before take-off.

Perhaps in "making it simple", he oversimplified, and created more confusion. Why were there standby passengers if there were 55 empty seats? Were they simply upgrade standby passengers who would have boarded anyway? (This seems fairly likely, as one of the passengers who claimed to have missed the flight is CEO Kaiden Dawson, and CEO's generally go business class)

Or was there some other reason why 55 seats were empty, such as for weight reasons?

There has been some speculation that there was a heavy cargo that limited to the number of passengers. Anyone heard of anything like that?

Many airlines "tanker" fuel into China for various reasons, cost of fuel there being one of them. There was some speculation on PPRUNE that this flight was doing so and hence had a weight restriction. Unconfirmed but plausible.

TWCobra said:
Many airlines "tanker" fuel into China for various reasons, cost of fuel there being one of them. There was some speculation on PPRUNE that this flight was doing so and hence had a weight restriction. Unconfirmed but plausible.
Click to expand...

Interesting. Would that be usable fuel? Or in some separate tank?

Some of the range estimates go far (2,000 miles) beyond Beijing. That seems like more than the usual safety margin. Or are they just making things up? 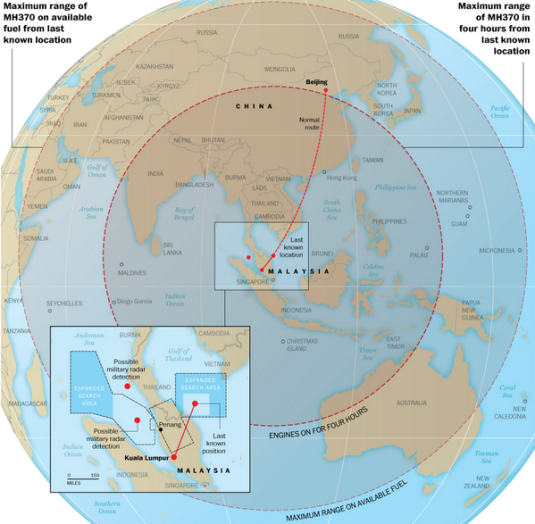 Mick West said:
Interesting. Would that be usable fuel? Or in some separate tank?
Click to expand...

I think TWCobra was referring to the practice of carrying more fuel than needed for the particular flight segment. It would be in the normal fuel tanks.

A weight restriction can be incurred on shorter stage length flights, like Kuala Lumpur to Beijing, because there is less fuel weight burn-off on a 5-hour flight than say New York to Tokyo, and 11 hours enroute.

So, the weight limitation would be a consideration of the Max Gross Landing Weight limits, upon arrival at destination. Again, only 'IF' there was a circumstance of "tankering" in this instance.

It is usable. It is not necessarily enough to make the return flight, but reduces the amount uplifted in China.

Tankering is common enough in airline operations. The bean counters weigh up the relative cost of the fuel in the two ports, factor in the cost of the extra fuel burn to physically carry it to destination and decide if it is worth it. The limiting factor, as WW says, is usually the max landing weight. Airlines will fill the aircraft up to a margin below that limit, usually a couple of tonnes in the case of a heavy jet.

So.. in layman's terms, the aircraft have more gas in the tank than they need so they dont have to pay the guy at the pump more than they absolutely HAVE to, to make it back home plus the % used for safety.. IE longer than expected holds etc?.. is that the gist?

Svartbjørn said:
So.. in layman's terms, the aircraft have more gas in the tank than they need so they dont have to pay the guy at the pump more than they absolutely HAVE to, to make it back home plus the % used for safety.. IE longer than expected holds etc?.. is that the gist?
Click to expand...

This is often done, when the cost per gallon (or litre) at a particular airport is so excessive that it is cost effective to "tank" the extra fuel (as much as possible, given certain operational limitations) and accept the slight increase in overall fuel burn costs, due to the excess overall weight.

Or if an airport may be experiencing a known shortage of fuel available for delivery, for example.

Again, unknown whether this was the case for MH370 (the airline's paperwork, the load sheet details, the Dispatch Release, etc, will be providing this info).

Ahh ok, I thought that was the case but I wanted to make sure I understood what you guys were saying in just plain everyday speech. Thanks to both of you guys for the info.
You must log in or register to reply here.