Just wondering if anyone has come across this guy yet? Supposedly this is a quote by Matt Anderssen, now involved in Indigo airlines but a former consultant. Indigo Airlines is/was (I don't know if it is still operating) a business airline based in Chicago and is not related to another Indigo Airlines in India.

This quote is doing the rounds at chemmie sites. 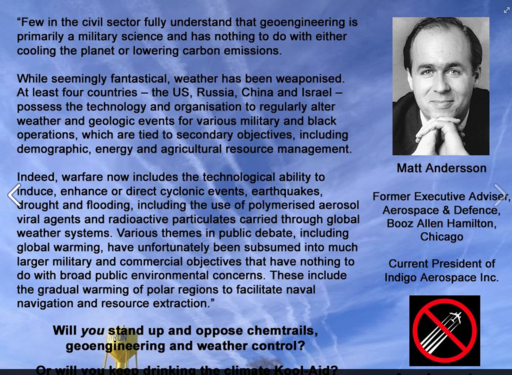 The quote is taken from The Economist readers comments. I don't how thoroughly The Economist vets those contributions but here is the compilation of others quotes by him in the Readers comments... which, charitably put, appear to be all on a certain theme. There are three possibilities in my mind as to the veracity of these quotes, in descending order of probability;

2. Someone has hijacked his identity and is posting under his name, or,

3. What he says is based on technology he is aware of but offers no proof.

Anyway here are the comments allegedly written by him... the invasion of Norway one I find ... interesting.

Whoever it is has lost it

EM or DEW's of various design have fairly wide presence in advanced world militaries, including Russia, China, Japan and Israel.

While their application naturally fits into the military "kill chain" and weapons mix, its most wide-spread use, and the most active applications planning and design, is for civilian control, abuse, intimidation and general dominion.

Moreover, certain of DEW's are carried, amplified, or enabled by atmospheric management, which is why several thousand metric tons of metal and chemical particulate matter are being introduced into the upper atmsophere on a weekly basis in several nations.

Lastly, EM weapons were on full display on 911 for anyone looking. Together with UAV's they represent a further abstraction and Aesopian routine that make killing institutional, anonymous and unnaccountable.'

Content from external source
It seems that Indigo is no more

"By 2004, Indigo had voluntarily idled its operations after challenges in securing additional capitalization"

Content from external source
Last edited by a moderator: Apr 9, 2015

Although the Economist comments contain some of the same phrases, after some Googling I think that full quote originally came from this letter published in the Guardian. There he is identified fully as "Former executive adviser, aerospace & defence, Booz Allen Hamilton, Chicago".

I think you are right. On several of his recent posts he identifies himself as "CEO Indigo Airlines" and his LinkedIn profile has him as "Executive Adviser Booz & Co". He worked there before Indigo Airlines but the Booz & Co website has no record of him being in any current leadership position there.

But that has not stopped the redoubtable Matt McInnes of Australians against Chemtrails of claiming this as damning proof. Matt never did get around to proving I was a former USAF pilot which he claimed on FB. Such is the standard of his "research".

Yes I've come across his name befoer in conjunction with a letter to the Editor that says chemtrails are all aorganised, there are dozens of planes doing it, etc

This is from a letter to the editor, not any actual research - - someons analysis of the letter on a blog

As usual any actual evidence is conspicuous by its absence - where are these "dozens of tanker aircraft" based? What are they spraying? Who is supplying it? How does someone running a small charter outfit know about it but no-one else does?

this is from Linkedin on him

Executive Advisor to the Aerospace & Defense practice of Booz & Company.

If the Journal wishes to enlighten the general public on questionable aircraft usage, you might take a look at state and federal government fleet acquisition and flight operations. It is fascinating, to say the least, and far from immune to the general unaccountability, waste and resource abuse endemic in government.

Content from external source
Last edited by a moderator: Apr 9, 2015

Have y'all seen this

It would seem if they are just starting tests, that would blow a hole in the whole chem trails nonsense

Cairenn said:
Have y'all seen this

It would seem if they are just starting tests, that would blow a hole in the whole chem trails nonsense
Click to expand...

Yeah, the SPICE project was put on hold very shortly after that article was written. See http://www.bbc.co.uk/news/science-environment-15132989

I still get chemtrails believers who refer to this project as proof that chemtrails testing is being done, even though it would have involved a tethered balloon releasing water droplets - a far cry from jets spraying metals.
M

I’m trying to verify where the quote came from starting with “Few in the civil sector fully understand...” Above, The Guardian is referenced. I saw that article. There is curiously little context though. Any help would be appreciated...

MarkEdwardThompson said:
I’m trying to verify where the quote came from starting with “Few in the civil sector fully understand...” Above, The Guardian is referenced. I saw that article. There is curiously little context though. Any help would be appreciated...
Click to expand...

It's just a letter to the editor in The Guardian newspaper, published on February 9 2012. https://www.theguardian.com/environment/2012/feb/09/at-war-over-geoengineering

It appears to have been written in response to an article three days earlier about the feasibility study published by Aurora Flight Sciences: https://www.theguardian.com/environ...rtificial-volcano-cool-planet-sun?INTCMP=SRCH
You must log in or register to reply here.

Debunked: Pentagon has Evidence of "Off-World Vehicles Not Made on this Earth"