At approximately 2:40 pm EST on February 14, 2018, a shooting occurred at Marjory Stoneman Douglas High School in Parkland, Florida. At least 17 people were killed and 14 others were hospitalized. The alleged shooter is in custody with the Broward County Sheriff's Office. He was transported from the scene to a local hospital for undisclosed reasons, before going to jail.


Law enforcement responded to reports of a shooting at Marjory Stoneman Douglas High School shortly before 3 p.m. The shooting sent students and staff streaming out of the school in a panic.


The victims included students and adults, Israel said. Twelve were killed inside the building and two died outside, he said. One died in the street and two died at the hospital, the sheriff said.

A tragic event, with echos of both Columbine and Sandy Hook. It's certain to be portrayed as a "false flag" distraction by the usual suspects. Infowars is already talking about a "cover up" with some random observations.
https://www.infowars.com/report-florida-shooter-inspired-by-isis-allahu-akbar/

MSM already covering it up

he's wearing a Trump hat in his social media. 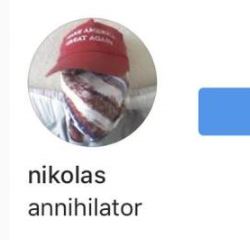 Just work scuttlebutt and not something I'm finding online, but I heard a weird flip on the false flag norm: every major shooting is followed by a surge in gun and ammo sales and Remington is filing for bankruptcy because of weak sales, so the gun industry is faking shootings to drum up sales.

Of course, Remington's issues aren't new and have persisted through multiple post-shooting surges, it'd take more than a short regional bump to turn their fortunes.

The link also addresses the ISIS thing - he posted a Google screen cap after looking up what allahu ackbar means, but he posted it along with a slur and a wish to kill terrorists.
Last edited: Feb 14, 2018

Z.W. Wolf said:
The same bots that were pushing for gun control early on later
Click to expand... 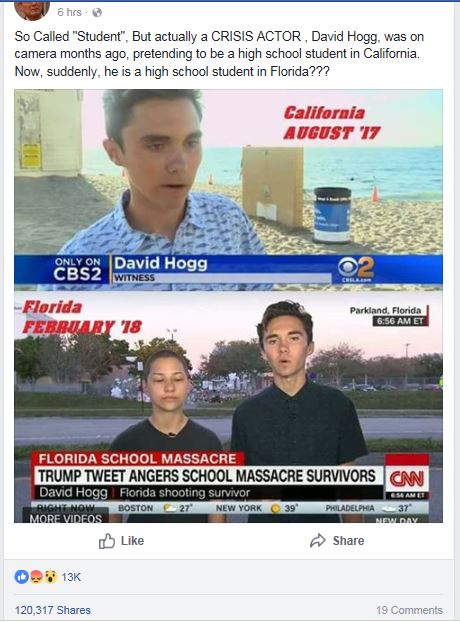 Fake of course. he was on vacation in Calif making a vlog and never said he was a California student.
Source: https://www.youtube.com/watch?v=HvZD7UkJd24&feature=youtu.be

deirdre said:
Fake of course. he was on vacation in Calif making a vlog and never said he was a California student.
Source: https://www.youtube.com/watch?v=HvZD7UkJd24&feature=youtu.be
Click to expand...

Images of a yearbook are now being circulated on facebook claiming David was a Californian student who graduated in 2015 . Might be worth an individual thread
This barefaced claim is getting a lot of traction close to 60,000 shares: https://www.facebook.com/linda.traitz/posts/10211563959915196?pnref=story

Note his classmate at top of frame with "eagles" Tshirt which is mascot of the Florida School, not the Cali one.

maybe. Blend all the ones on him together. They don't provide evidence of anything though to back up their claims.

My link above is gone

Conspiracy theorists' attacks are catching up with the outspoken survivors:


The students have become a mobilizing force unlike any seen after previous mass shootings, planning marches and rallies in Florida and Washington — all while mourning the friends they’ve so recently lost.

They have also become a target of right-wing smears and innuendo.

Some prominent figures in the right-wing media are suggesting that the students are making it all up, or that the children are paid actors or that their talking points have been manufactured by public relations experts on the left.

Not just right wing media, but it's come very close to home. An aide to state representative Shawn Harrisson, using a myfloridahouse.gov email address, sent claims that students interviewed were crisis actors. The aide was quickly fired, but it shows that this is not just some lunatic fringe, this is people with political connections and possibly aspirations of their own as these kinds of staff positions are sometimes the gateway to build the connections needed for "real" appointed or elected offices.

deirdre said:
he was on vacation in Calif making a vlog and never said he was a California student.
Click to expand...

Somewhat off-topic, the "Hogg in California" video led to a political aid being fired:
https://www.washingtonpost.com/news...g-survivors-actors-within-hours-he-was-fired/


According to the Tampa Bay Times, Kelly sent an email to the newspaper’s Washington bureau chief, Alex Leary, writing that the two teens “are not students here but actors that travel to various crisis when they happen.”

When the Times asked Kelly to support his claim, he sent a link to a YouTube conspiracy video about Hogg.

“There is a clip on you tube that shows Mr. Hogg out in California. (I guess he transferred?),” Kelly said in the email, according to the newspaper.

GregMc said:
Note his classmate at top of frame with "eagles" Tshirt which is mascot of the Florida School,
Click to expand...

that could be the band the Eagles. this link has vid of the Florida yearbook being flipped thorough (its not youtube so I cant embed it, sorry)
http://thedailyhaze.com/david-hogg-redondo-shores-high-school-california/ video

David is a very passionate guy into all sorts of things like Video and Photography, Astronomy , Vblogging etc His school websites detail many of his activities such as setting up cameras for High Altitude ballooning projects: He's president of the School Drone club.


There's a slight possibility that the Classmates website may not be entirely reliable : http://www.classmates.com/people/Donald-Trump/4000169190207

The whole "crisis actor" meme is getting attention from MSM and is getting quite a bit of pushback including getting skewered by Colbert/Kimmel et al...

In the fever swamps and extremist fringes of the internet, the outspoken student survivors of the mass shooting at Marjory Stoneman Douglas High School are depicted as mouthpieces of the FBI, pawns of left-wing activist billionaire George Soros, stooges of the Democratic Party — or all of the above.

The students, who have called for stronger gun control measures, are now the subject of conspiracy theories that have spread far and wide, even reaching cable news and spurring the firing of a Florida lawmaker’s aide.

The speed with which these groundless claims spread points to a troubling digital ecosystem in the era of fake news. In this shadow media network, unfounded information shows up on dubious sites, churns through the news aggregation site Reddit, and works its way into Facebook feeds — and to the mainstream media.